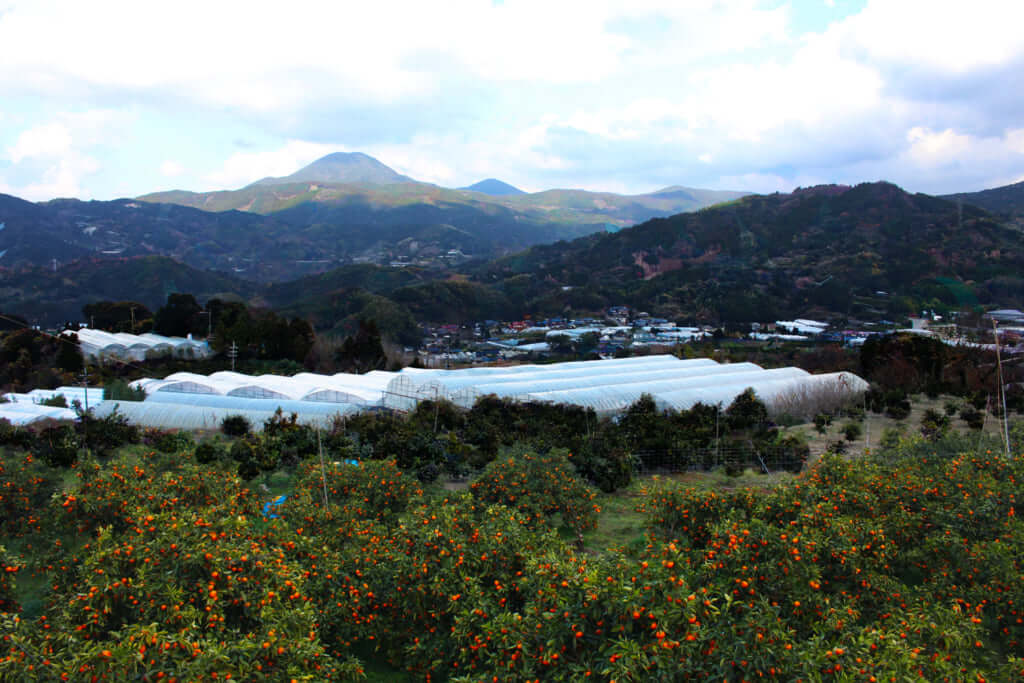 Nestled on a hillside, Toco Waka Farm overlooks a valley full of orchards where dekopon, and other types of mandarins, are grown. From here, you can see Karatsu Bay, Karatsu being a city in Saga prefecture on the southern island of Kyushu. This artisanal botanic garden, once used to grow citrus fruit, is now used to produce medicinal herbs such as lemon balm, lavender and tea tree. Not forgetting bitter orange: the flowers from this species of orange are used to produce neroli oil. The petals are harvested by natural cosmetics company BbyE every year to use in its orange blossom cosmetics range NEROLILA Botanica. 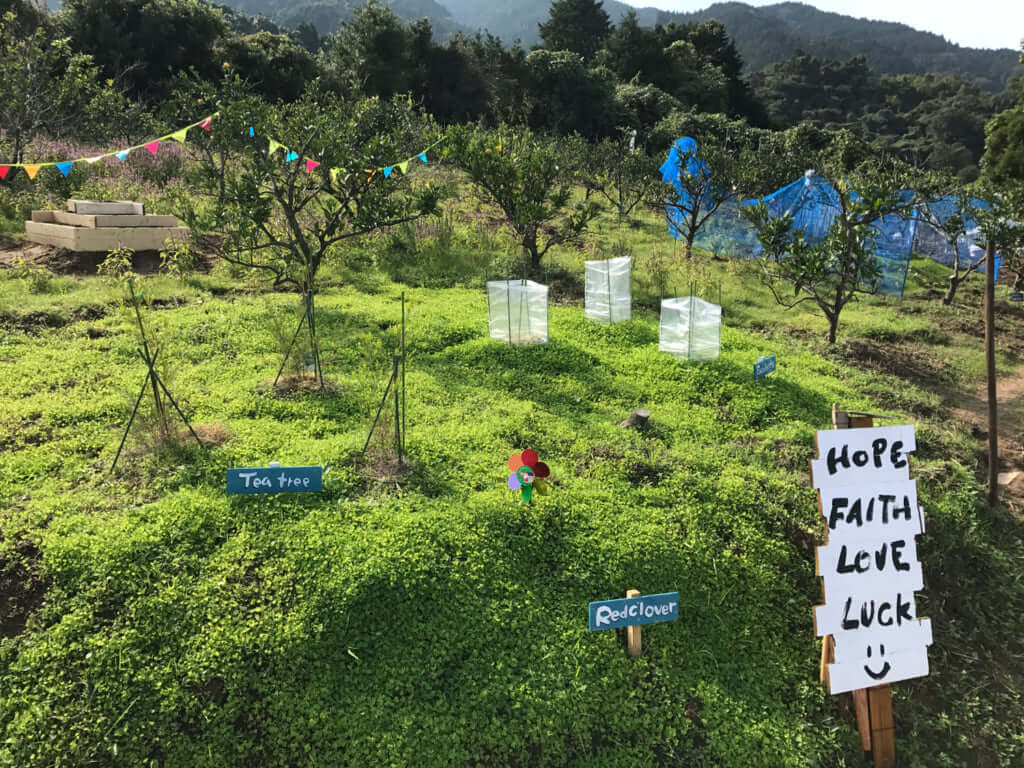 Toco Waka Farm was created by the Japan Cosmetic Center (JCC) to act as a window into its work in the region: a way to showcase the richness of the abandoned land in Saga prefecture in order to promote entrepreneurship among the residents and create jobs as a result. All of this was thanks to a partnership between the cosmetics industry, the academic world and the local authorities. Unusually, the JCC’s project was born after a French manufacturer, Alban Muller, visited Karatsu in 2011. 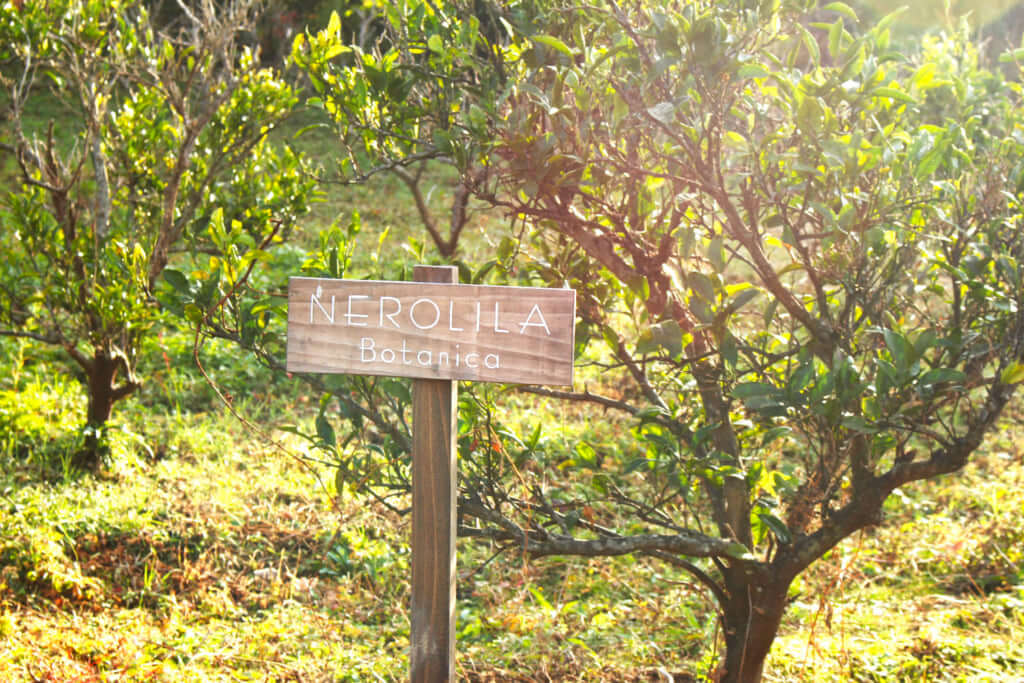 A French idea adapted for Japan

Alban Muller had years of expertise in natural cosmetics and was seeking to develop his business in Asia. At the time, there were very few cosmetics companies in Karatsu, despite the fact that the city’s geographic location made it ideal for business, being equidistant from Tokyo, Shanghai and Seoul and thus facilitating international trade. Karatsu also had a long-standing history of maritime trade with China and Korea, which is in fact reflected in its name (‘kara’ refers to Asia and ‘tsu’ means port). 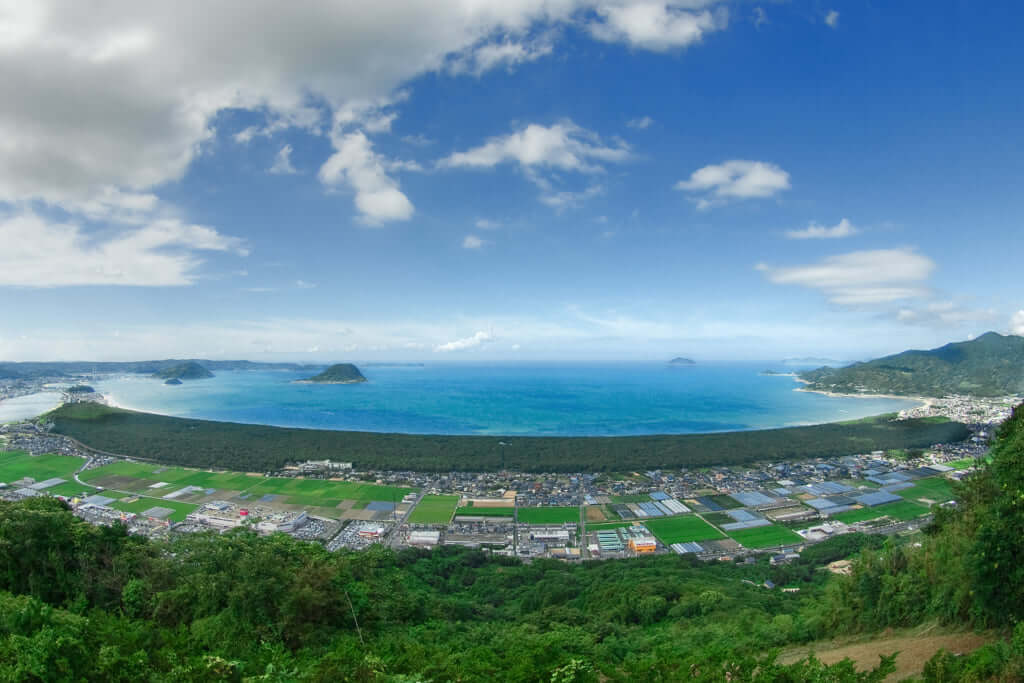 Muller immediately saw the region’s potential and, drawing on his experience at the heart of France’s Cosmetic Valley, he suggested replicating the concept in Karatsu, and so it was that the JCC was created in November 2013, with Alban Muller as its president. Unlike Cosmetic Valley, which brings together a network of already-established French companies, the JCC primarily targets new entrepreneurs and puts manufacturers at the centre of its project. The main aim is to showcase local products and production techniques that are unique to the region, before making them available to companies.

A region rich in resources 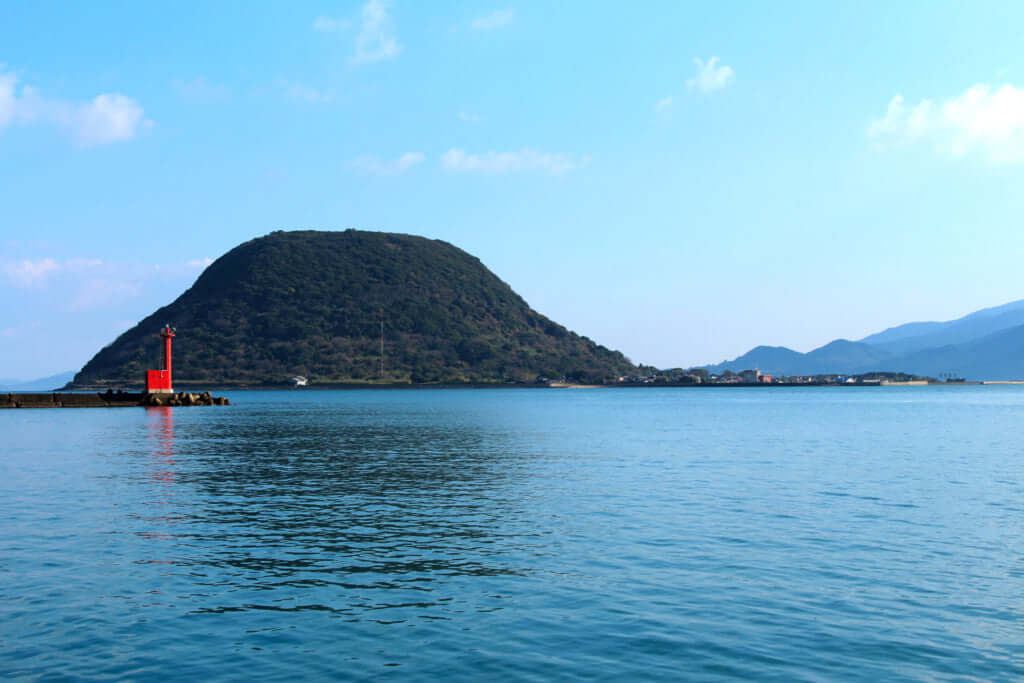 The majority of Saga prefecture, located in the north-west of the island of Kyushu, is rural, and is a habitat for plants with recognised health and beauty benefits. This is true of Peucedanum Japonicum, a species from the parsley family nicknamed ‘elixir of life’ in Japan. It offers many benefits and is primarily consumed as an infusion or food supplement. It emerged that Peucadenum Japonicum was growing naturally on the little island of Takashima. Situated just off Karatsu city, Takashima is recognisable due to the hill in its centre, but has gained a reputation for an entirely different reason… it is said to bring luck to people who play the lottery! 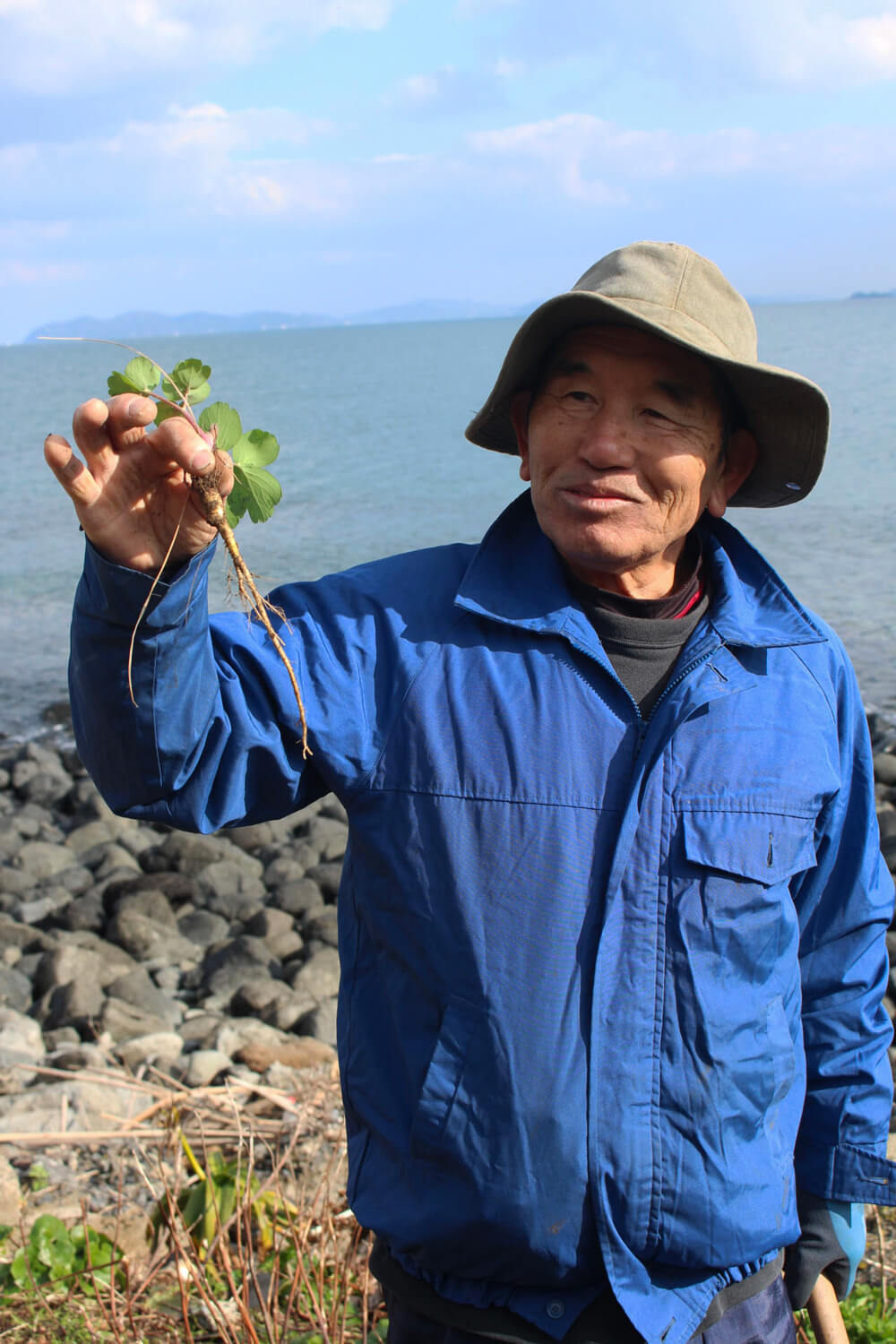 But fortune truly smiled on the island’s residents when the members of the JCC discovered that Peucedanum Japonicum was growing all over the island. Once they became aware of the benefits they could gain from harvesting it, the residents hurried to protect its growth. Most of them, like Mr Nozaki, are seasoned farmers who are very enthusiastic about nature and wellbeing. The artisanal honey produced from their hives has many useful properties, but it’s the care they show for medicinal herbs that now enables them to supplement their income by selling the Peucedanum Japonicum they harvest to big cosmetics companies. 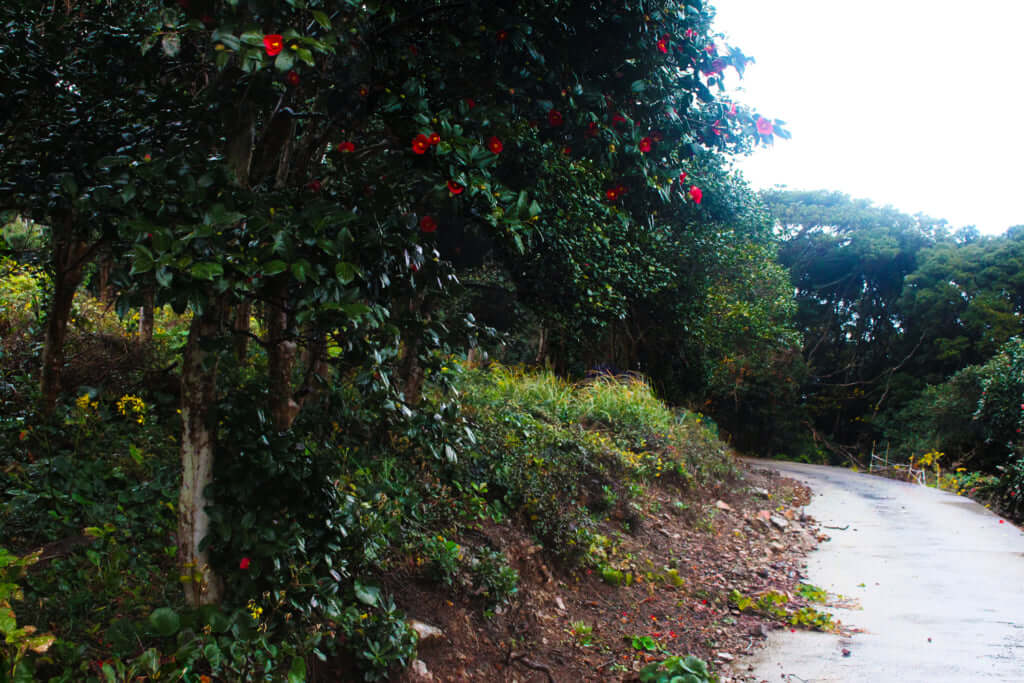 This sideline is also familiar to the fishermen in Kakarajima, an island north-west of Karatsu. The camellia has made the island its home, and there is a beautiful garden containing hundreds of camellia trees decked with red flowers. The trees flower every February, before the petals give way to seed pods. When autumn comes, these little pods dry and can then be harvested, usually in September. The residents then try to fill as many sacks as possible with the seeds from the pods. The seeds are the size of marbles and hazelnut in colour, and must be left to dry in the open air for two or three days before being pressed to extract their precious oil. As winter is a quiet period for the fishermen, it is usually then that they engage in this activity.

Toshiyuki Tokumura is the president of the camellia harvesting committee in Kakarajima. He takes great pride in the skills shown by the island’s residents, who are the only people to cold press camellia oil using two machines that were made especially for them. Camellia seeds are usually pressed several times in order to extract as much liquid as possible, but not in Kakarajima. ‘This creates more wastage, of course, because we only press the camellia seeds once’, he explains. ‘But the oil that’s filtered in this way is purer and extra virgin’. This precious elixir quickly earned a reputation in the world of Japanese cosmetics, which is extremely fond of camellia; Shiseido’s Tsubaki (Japanese for camellia) range is just one of the places where it can be found. Seven companies in the JCC’s network incorporated it into their products in 2019 alone. 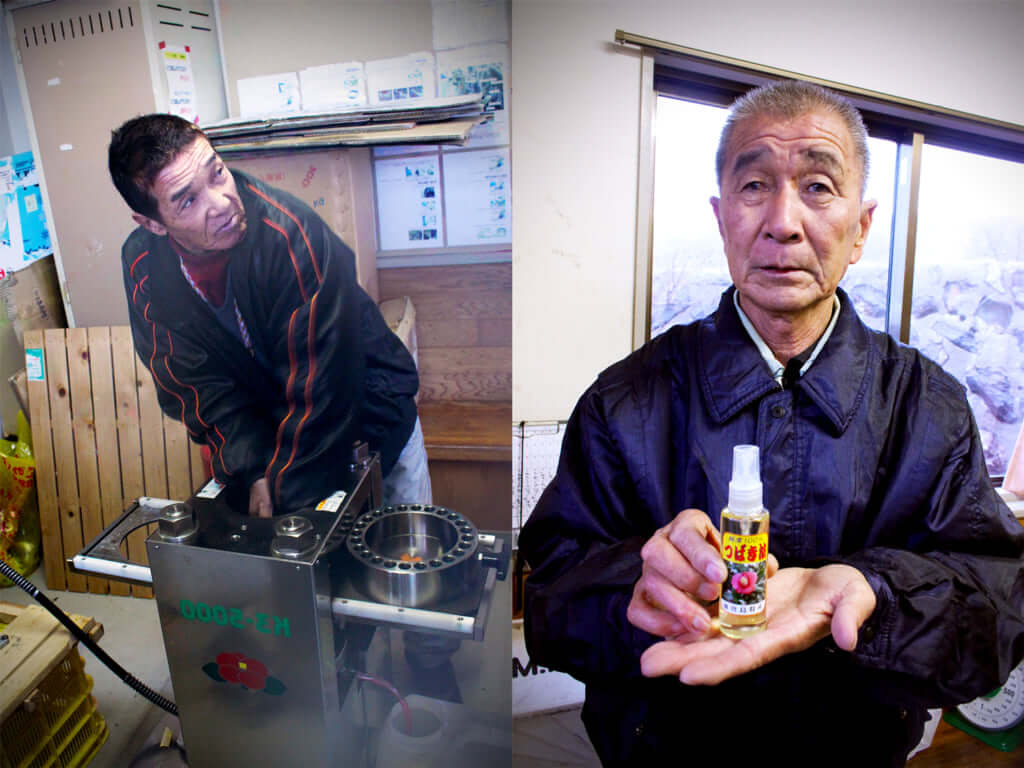 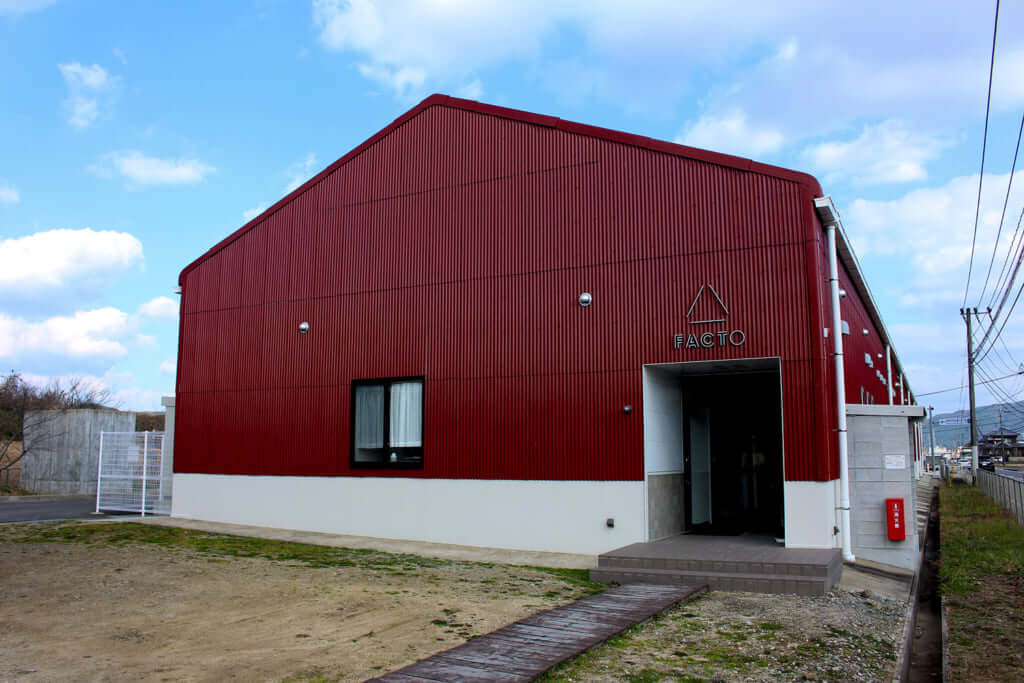 The seeds that are only pressed once don’t just get thrown away. Some are used to feed wild boar in Kakarajima, while the rest are gathered up by the JCC and taken to the FACTO Cosmetic Factory, a laboratory and cosmetics production centre in the south of Karatsu. This former plastic bottle recycling factory underwent a full renovation in 2018 using environmentally-friendly, local materials such as shikui paint and ceramics from Karatsu, an idea developed by the city, which owns the factory, and the JCC. The main characteristic of the factory is the fact that it allows small-scale production, which is relatively rare for conventional factories. This means that small businesspeople can launch their natural cosmetics project with ease, without needing huge investments to do so.

A cooperative model in full bloom

The strength of the JCC lies in the fact that it has created an integrated regional environment based around natural cosmetics, which now counts 180 companies as members, the majority of which are medium-sized. The organisation supports farmers – of which there are currently 30 – so they can find a market for their raw material. It also helps with the transformation and industrial production processes. On the commercial side, the JCC supports local entrepreneurship, helping to boost employment and encouraging young workers to come back to or stay in Saga.

‘We want to create a network of knowledge where experienced consultants are keen to advise those who want to go into business’, explains Daizou Yashima, director general of the JCC. The organisation has also started an incubator which supports project creators from production to distribution and allows them to build bridges and connections and even enter the international arena. There hasn’t yet been a success story on that level, but it’s surely only a matter of time.

From Karatsu to Paris 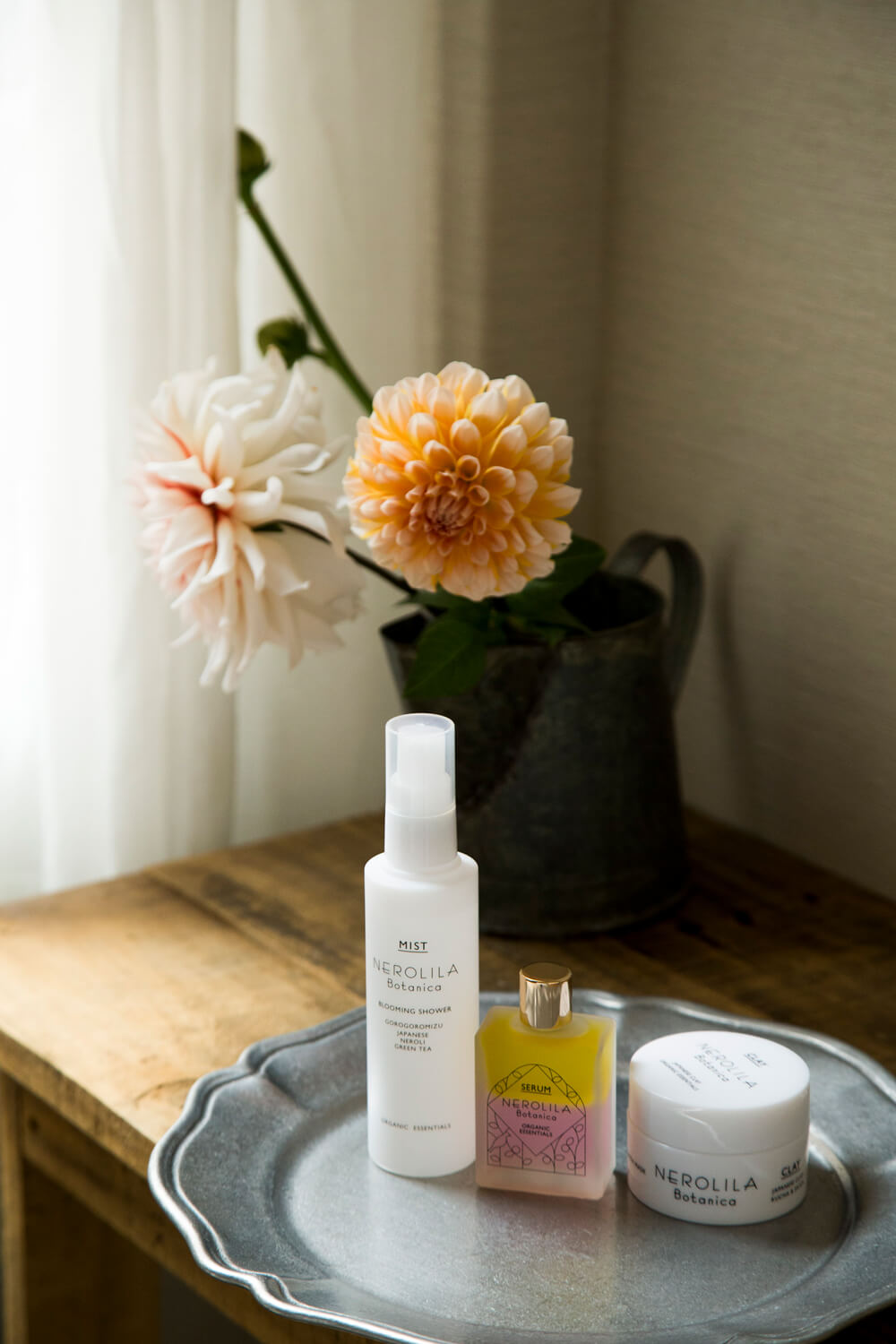 It seems especially likely because some of the members are ambitious, like the brand BbyE, which has two product lines honouring ingredients from Saga prefecture. The first, NEROLILA Botanica, offers gentle face care products made using neroli essence from the garden at Toco Waka Farm, and the second, rinRen, is a haircare range that’s delicately scented with camellia. The products are unusual and contain ingredients not frequently found in European cosmetics. That’s why BbyE hopes to eventually launch its rinRen haircare range in Europe. Before the range becomes a bathroom cupboard staple, it’s available exclusively at the Bijo pop-up store in Le Bon Marché until 2nd February. 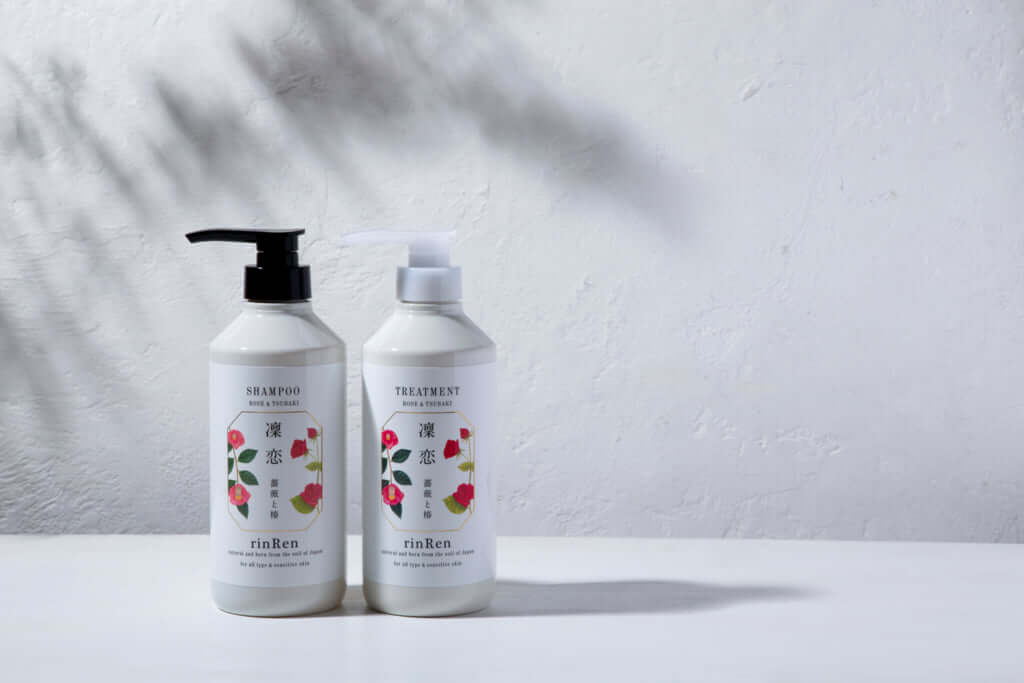 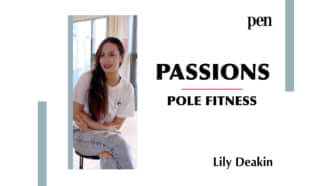 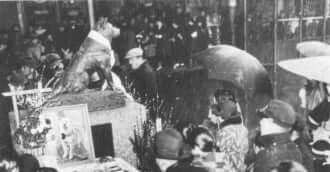