The Beautiful Garden of Nanzenji Sando Kikusui, a Traditional Ryokan in Kyoto 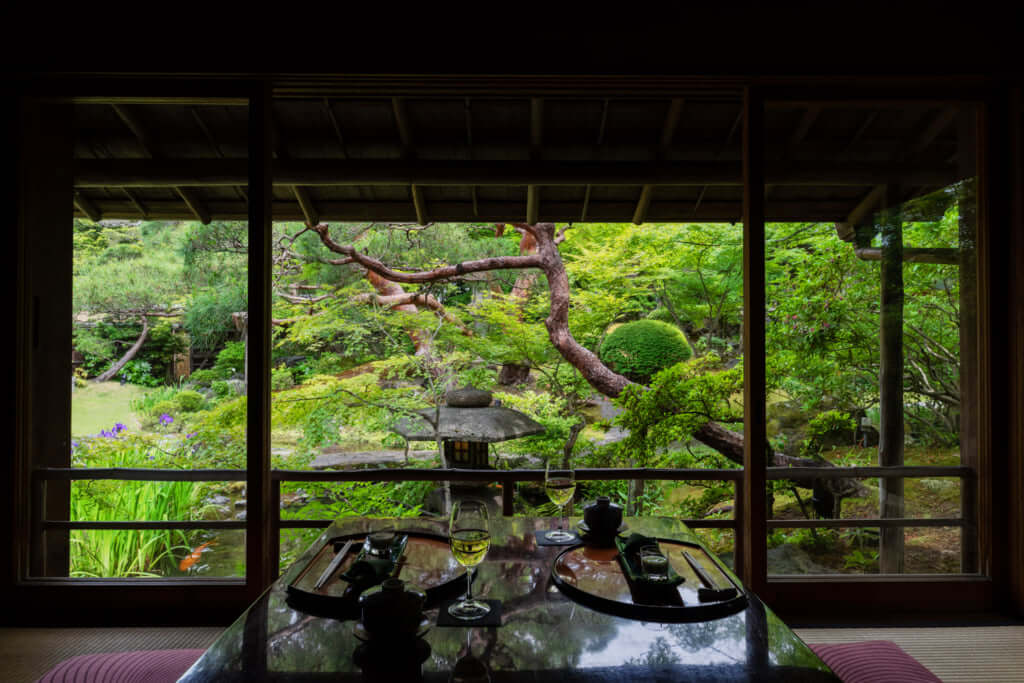 Compared with the streets in the main part of Kyoto, which have been bustling with an ever-expanding number of tourists in recent years, Nanzenji in the eastern part of the city still watches time flow calmly by. Resting in the foothills of nearby Mount Hiei, which towers directly above it, Nanzenji affords a beautiful view of the mountain’s blazing fall colors when autumn arrives. Because of the attractions of such a location—hard to replace with anything else—many of the movers and shakers of the Japanese political and business worlds built numerous villas there during the Meiji, Taisho and Showa Periods (1868 to 1989).

The restaurant-cum-ryokan Kikusui is situated in a site that used to be one of those villas. It started out its existence under the ownership of a dry-goods dealer, Suke’emon Teramura, and was then converted into a Japanese-style restaurant with an attached inn. Only recently—in June 2018—did it become reborn as Nanzenji Sando Kikusui.

The true value of Nanzenji, unmistakably, is in its verdant environment. For that reason, the most luxurious element in the villa is the garden, whose design takes advantage of that situation. The gardener who designed Kikusui was the landscape architect Jihei Ogawa, who was active in Kyoto during the Meiji Period (1868-1912). Representing the seventh generation in the Ueji line of landscape architects (of which the eleventh generation is currently active), he was famed also for the design of the garden in Heian Shrine in Kyoto as well as that of the Murinan Villa owned by the erstwhile prime minister Aritomo Yamagata (1838-1922). At that time, thanks to the rapidly modernizing infrastructure in the country, water started to be piped into the Nanzenji district from Lake Biwa on the other side of Mount Hiei. The new frontier of gardening opened by Jihei was his utilization of those abundant water resources in the development of his gardens. 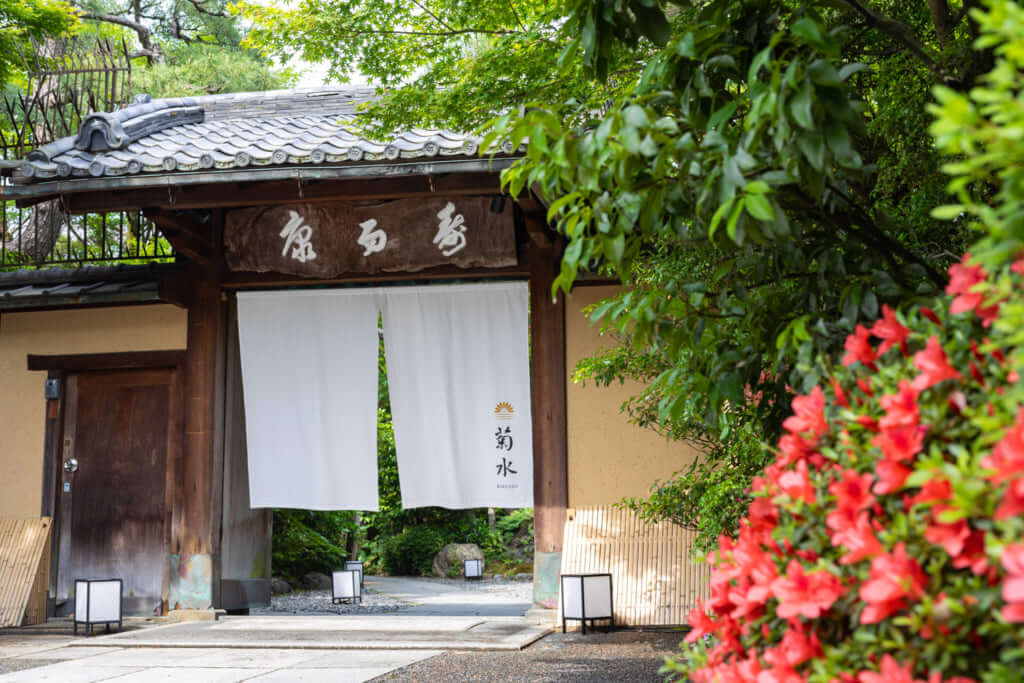 Kikusui was first developed in 1895 as a villa that belonged to a dry-goods dealer, after which it came to be run as a traditional inn famed for its cuisine.

The view of the garden from the dining room on the first floor. The large Japanese red umbrella pine in the foreground is the symbol of Kikusui’s garden. ©Nacása & Partners Inc.

When viewing Kikusui’s garden from the main building, one realizes that it slopes upward slightly from the foreground location of the giant red pine, planted more than two centuries ago, toward the rear. This was an optical trick contrived by Jihei to allow visitors to take in the whole view of the garden, just as with a dramatic stage, and was also the secret to his use of water. The water starts to flow down from the boulders placed in the rear of the garden, then meanders through stones as it hits each of them in turn, just as in a mountain rivulet, eventually forming a small stream that flows into a gourd-shaped pond modeled after Lake Biwa. Unlike previous gardens, which lacked the flowing water and other elements, Jihei’s hallmark concept of utilizing the providence of nature is also in evidence in the garden he designed for Kikusui. Indeed, this ‘living garden’ can be regarded as one of the masterpieces of that landscape architect, who earned the moniker of the ‘magician of water’. Visitors walking through the garden inevitably find themselves in awe of its infinite expanse. Even the position of each individual stone seems to have been carefully calibrated to offer a totally different aspect to observers depending on the angle of view, thus making the whole garden feel even bigger than it really is. It is also highly recommended to view the landscape of the garden from the two teahouses that have been built within the garden in a manner that makes them appear almost blended in with the background. The scene of the garden as viewed through the window frames cut into the sides of the teahouses resembles a painting.

With the rebirth of Kikusui, the main building of the villa—passed down from the time of its founding—has also been remodeled in a way to let it take full advantage of the garden setting. Contemporary high-end ryokan in Japan are now expected to offer a substantial degree of comfort, and that aspect has certainly been incorporated into the reborn Kikusui, while the utmost has also been done to retain the beautiful sukiya-style space of the building, in which the beauty of traditional Japanese architecture lives on. We recommend that you take the time to sit down, either in Kikusui’s dining room or on a terrace chair, to enjoy the spectacular view of the garden scenery while forgetting the flow of time. Koi carp swim in the pond, which stretches to the edges of the main building, and if you look hard enough, you should be able to spot water strider insects flitting along the water surface of the pond during the summer season. Occasionally it might be even possible to see a snowy heron swoop down from the surrounding mountains trying to catch baby carp in the pond. That is evidence that the garden has already become part and parcel of the mountain itself, bestowing upon it precisely the kind of value that is impossible to create overnight. That is to say, the experience of viewing the garden at Kikusui is tantamount to soaking in the beauty of Japan’s mountain scenery. 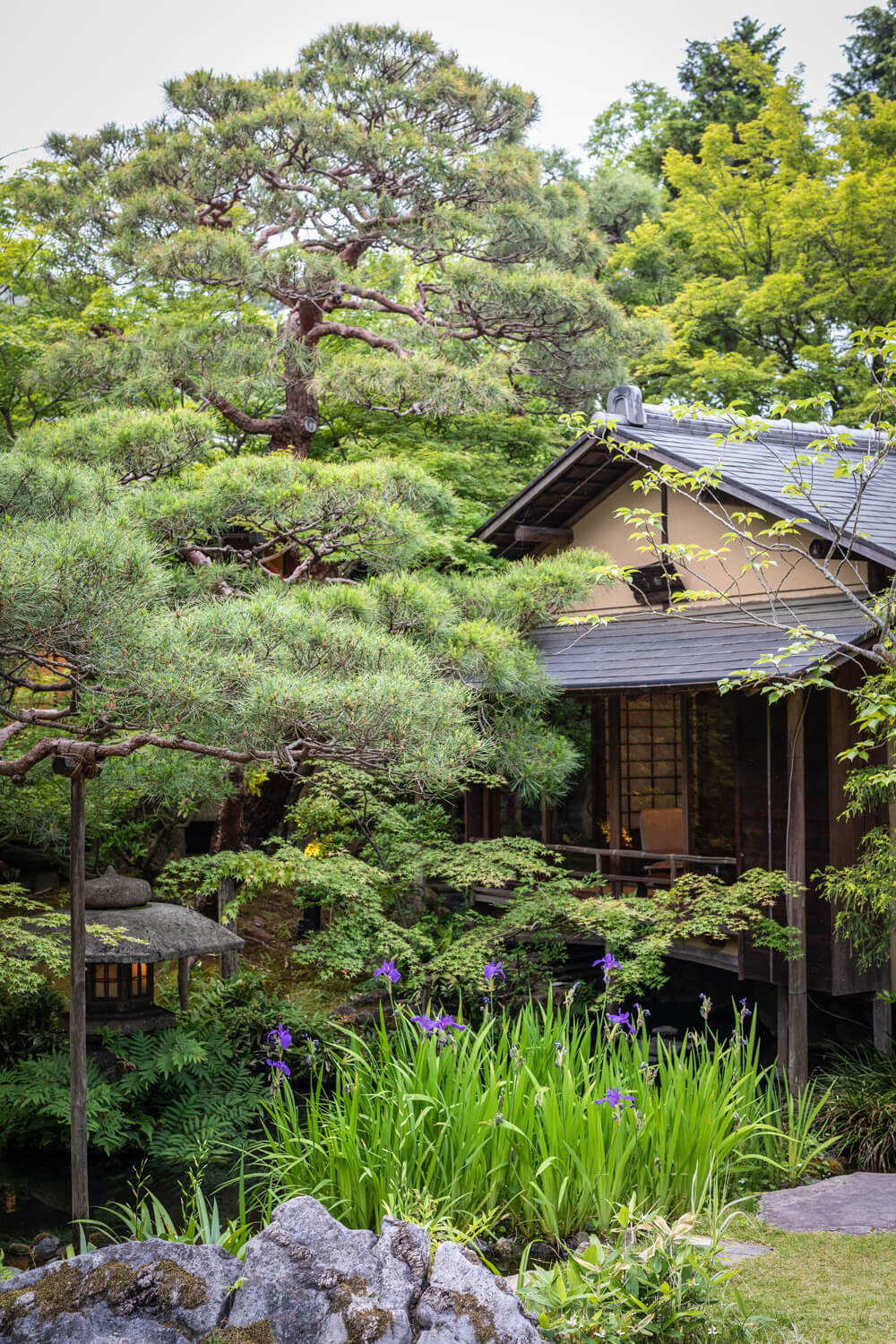 The interior and exterior of the teahouses are designed to blend into the garden. 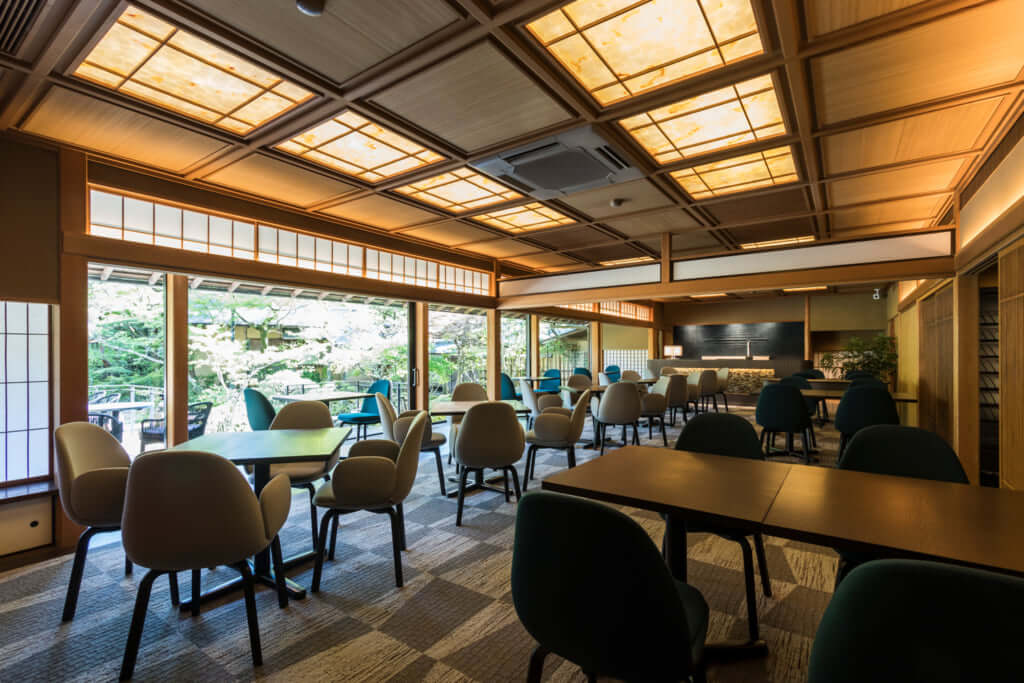 Guests can view the entire garden from the expansive dining room space. In addition to finding accommodation there, one can patronize Kikusui simply for its restaurant.

Kikusui’s garden also serves as an important source of inspiration for the food served there. The menu at Kikusui offers a choice of either Japanese kaiseki or Kyoto-style Western food. The kaiseki offerings have been supervised by Hideaki Matsuo, the head chef of the Japanese restaurant Kashiwaya in Kawasaki, which has been awarded three stars by Michelin. His contributions, along with the inn’s long history as a restaurant, make it unnecessary to explain further how wonderful the Japanese cuisine is at Kikusui. But we also recommend trying the Western food there as well, as it employs fresh seasonal ingredients procured from the vicinity of Kyoto. In the Western course selection known as ‘Niwa—The Garden’, the chefs have prepared dishes inspired by Kikusui’s garden; moreover, the offerings are updated every few months to reflect the season. For instance, when this article was written, the writer was presented with an hors d’oeuvres offering called ishi (stone), in which the chefs took sliced raw Biwa carp from Lake Biwa, combining it with cucumbers and kelp so as to make it look like the stepping stones of Kikusui’s garden.

According to Kikusui’s executive chef Hideki Ofude, ‘You can discover many different sorts of natural phenomena while strolling through the garden here, such as the changing leaf colors, the lives of the insects, the sound of the wind, and the trickle of water. There is never any lack of inspiration here!’

His words attest to the central importance always signified by the garden at Kikusui, an inn that prides itself as a restaurant. 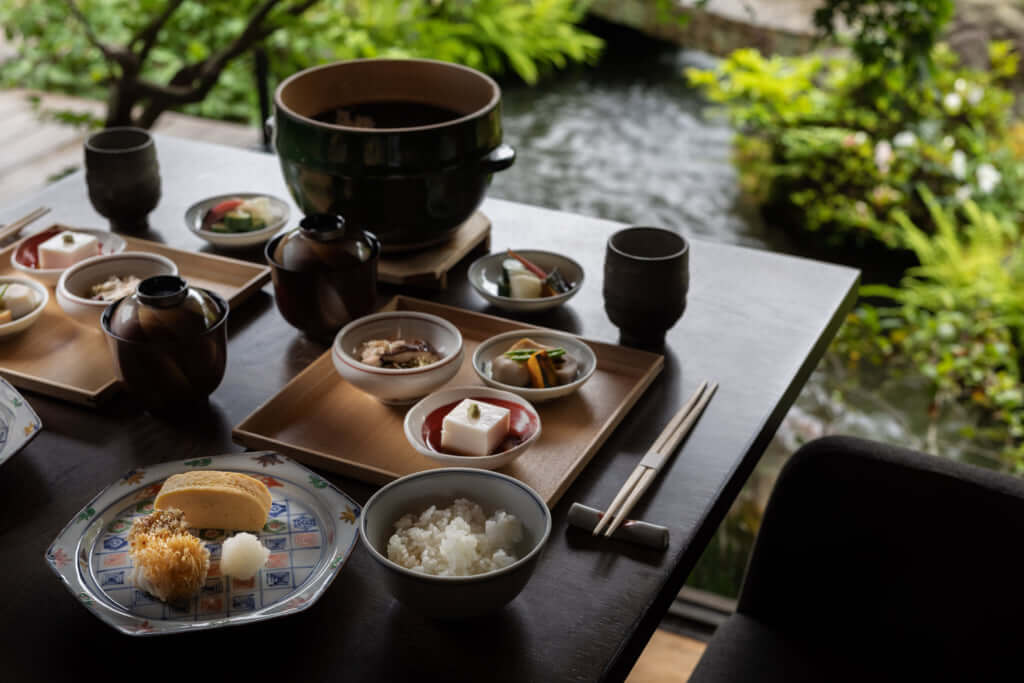 Breakfast at Kikusui consists of various dishes placed separately in beautiful small plates and dishes, along with rice cooked in an earthen pot. 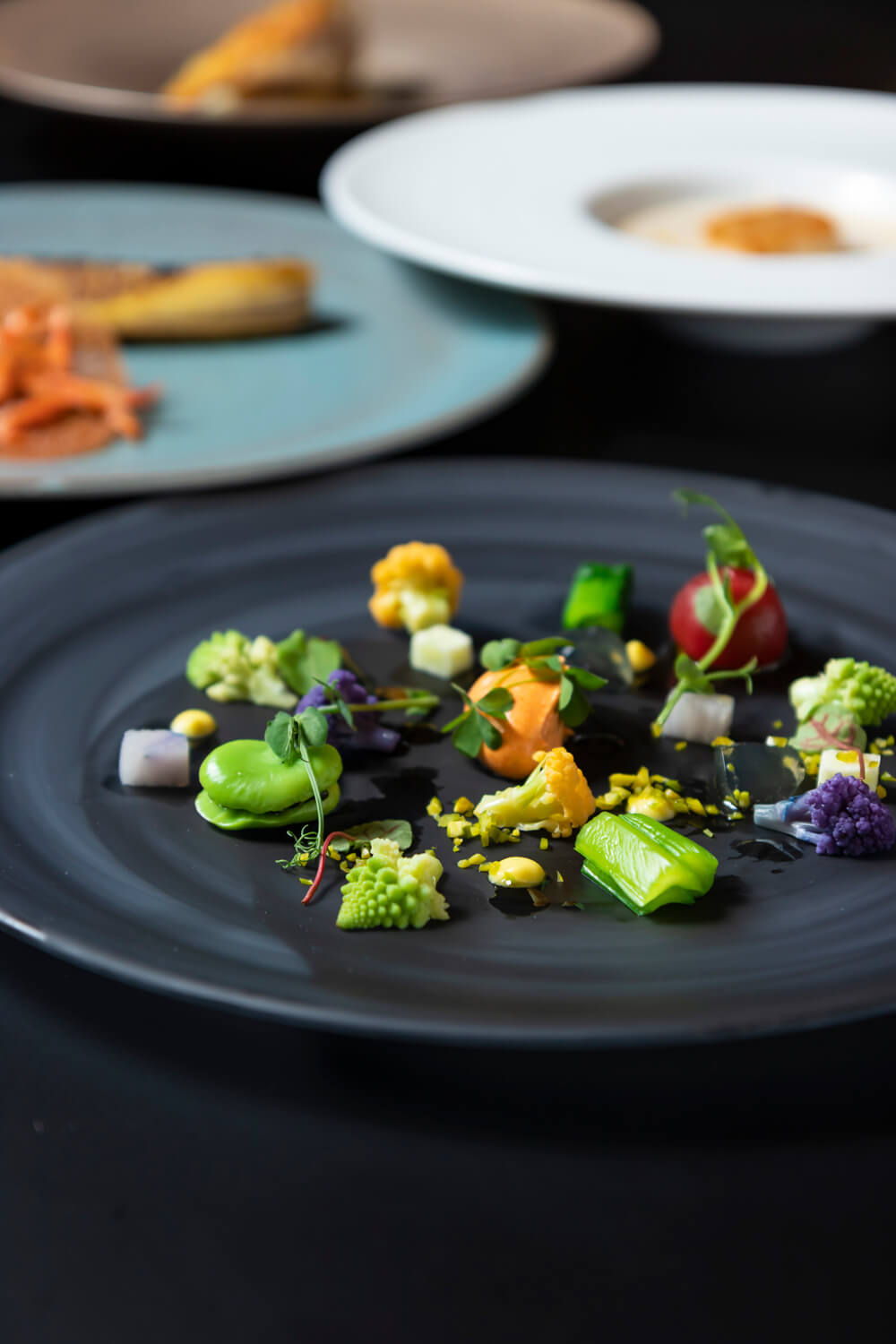 A signature dish in the Western-style course comprises seasonal vegetables presented together with a paprika mousse. The ingredients are intended to be mixed boldly. 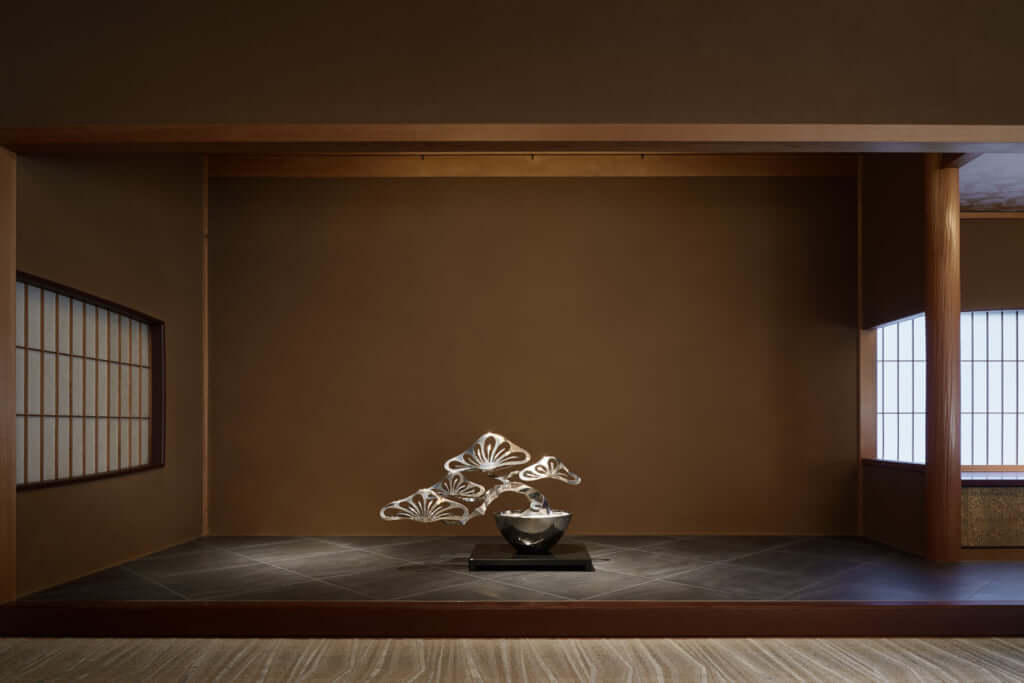 Modern artworks have been placed here and there within the traditional Japanese spaces of the inn, seamlessly fusing the two aspects. This piece, entitled 'Bonsai', was created by Nobuyuki Yoshimoto. 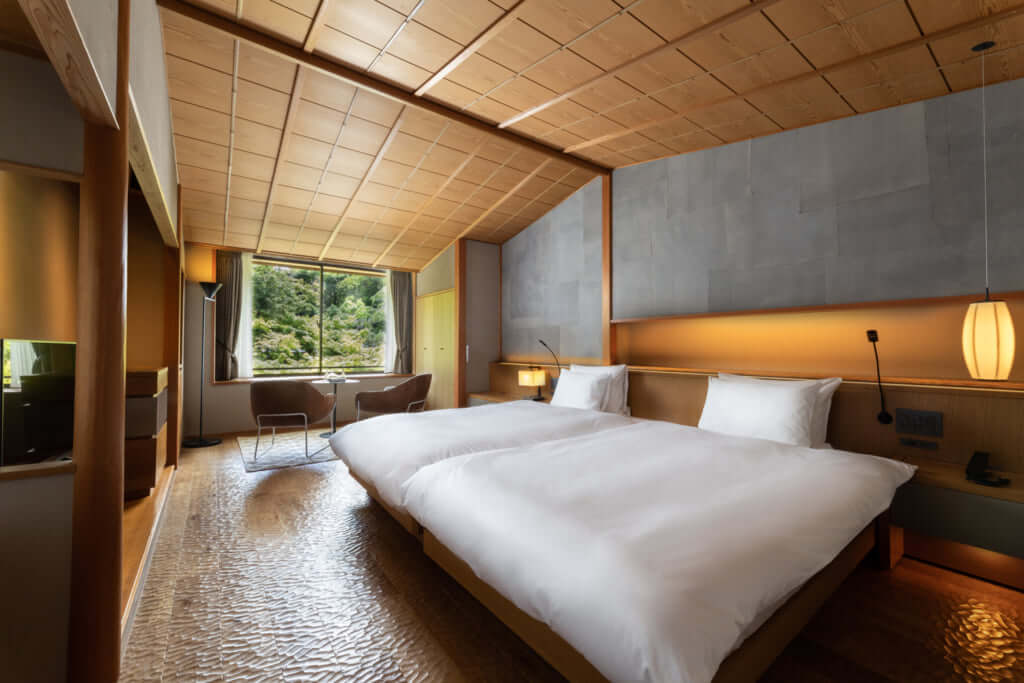 The inn offers a total of five rooms, each of which provides an excellent view of the garden. The cost per person, including breakfast, starts at ¥26,000, with a minimum of two persons in each room. 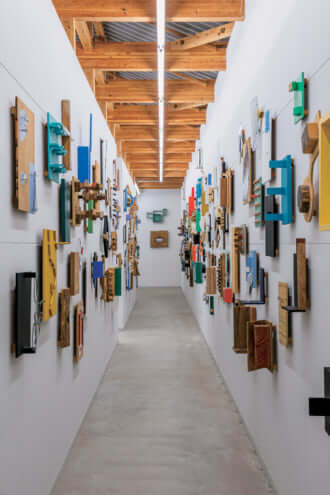 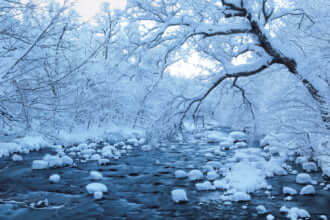