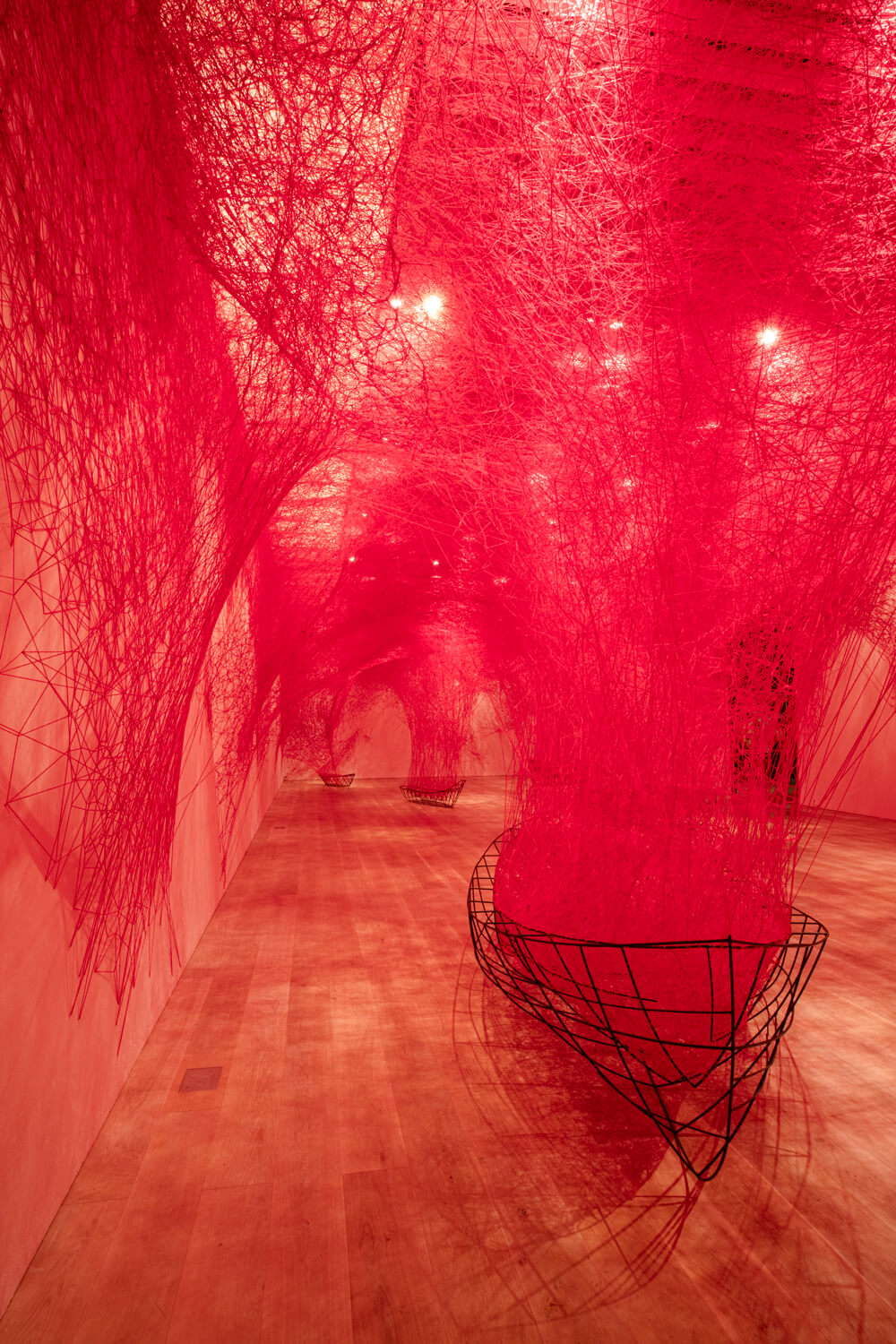 'Uncertain Journey', 2016, and 2019. View of Mori Art Museum’s solo exhibition, 'Chiharu Shiota Exhibition'. The 'ship' motif that was chosen at the 2015 Venice Biennale is also the shape of a palm scooping up something. A thread appears to flow out, or flow in from there.

A scorched piano set in a space covered with countless threads. A boat floating in a sea of red threads that seems to be gushing out. The viewer is drawn into the world of artworks as if they are entangled in the vast sea of threads. Chiharu Shiota’s work has an overwhelming world view that is unforgettable once seen. Last year, more than 660,000 people visited the retrospective ‘Chiharu Shiota: The Soul Trembles’ exhibit at the Mori Art Museum, which is the second largest number of visitors to an exhibition in the museum’s history. Many of the visitors came to the exhibition more than once. This means that there is something very captivating about her work, constantly drawing its viewers—but what is that something?

‘So far, this is the first exhibition that has managed to follow the concept of death so closely’, said Shiota. This was the largest solo exhibition of her work ever, looking back on 25 years of her artist activities. The day after the event was scheduled, Shiota was told that her cancer had recurred. The exhibition, which was prepared and produced while she fought against her illness with her future uncertain, turned out to be a crucial turning point for her. 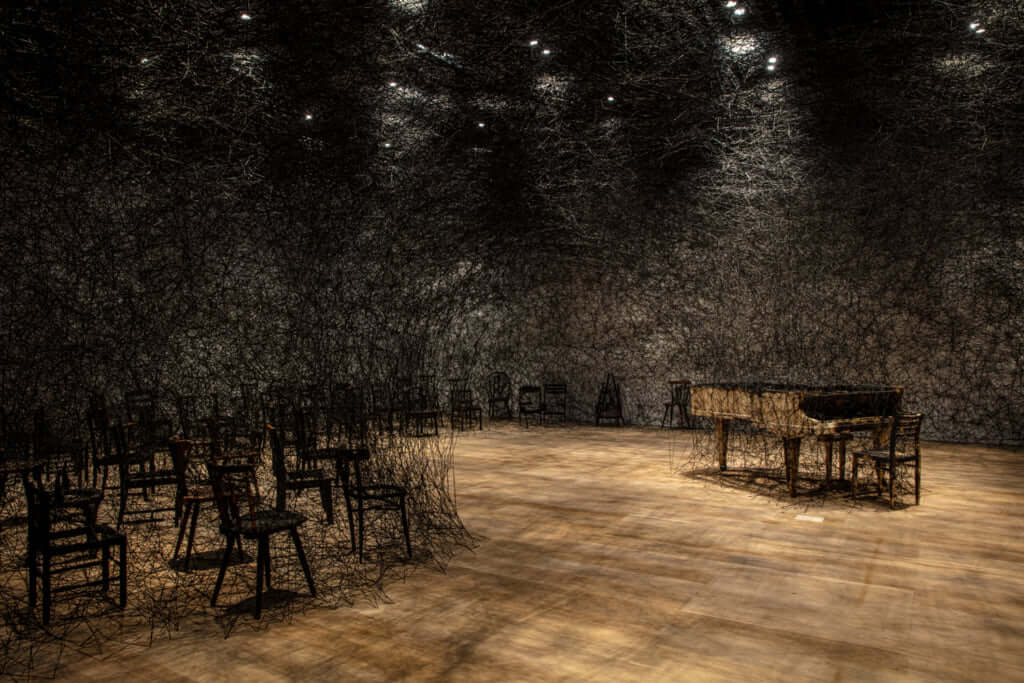 'In Silence', 2002, and 2019. In last year’s solo exhibition, works from Shiota’s stay at the German Akademie Schloss Solitude were reproduced at 'Chiharu Shiota: The Soul Trembles' (exhibit has ended). The burnt piano had an exceptional presence.

‘Everything was so systematic at the hospital, and my feelings and heart seemed to have been left out’, she said. ‘I felt like I couldn’t maintain myself without continuing to produce something’, she added. ‘I would make an artwork using the bag that contained my cancer-treatment drugs, or I would direct the camera at myself as I went through hair loss.’
As a result, Shiota’s works from the 1990s to 2000 seem to bear a scent of death.  ’Because I was just trying to live, I was doing my best. Where would I go if I died…? From this idea, I came up with the word “soul” for title of the exhibition.’

Rusted beds, dresses, old keys, windows, silent pianos… ‘existence in absence’, highlighting the memory of things, has always been her distinct theme. Shiota explores the breathing that can be observed in that absence, as if she were focusing on spinning a thread. 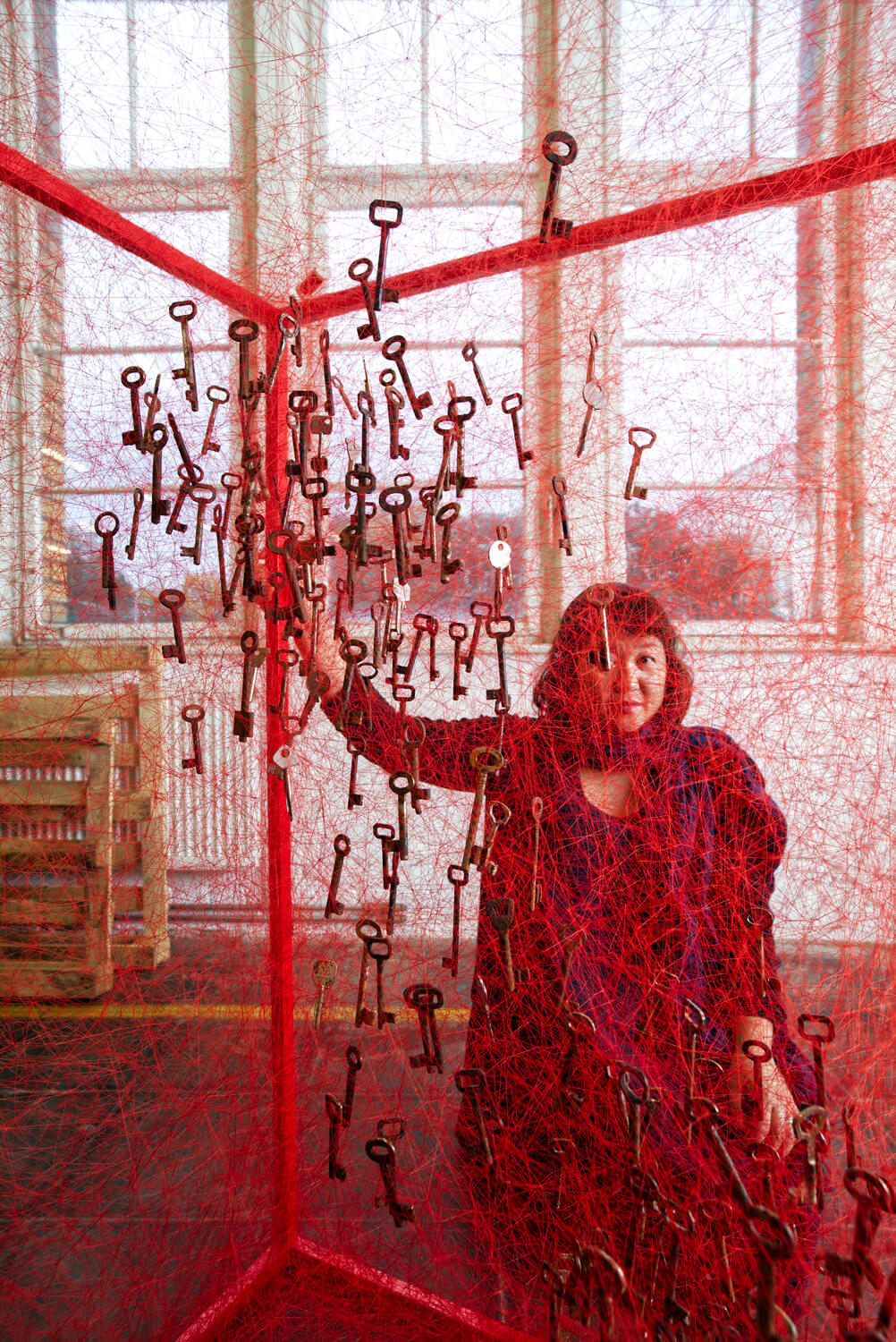 Born in Osaka Prefecture, Shiota moved to Germany in 1996. In 2008, she received the Art Encouragement Prize from the Japanese Minister of Education, Culture, Sports, Science and Technology. In 2015, she was selected as the representative artist for the Japan Pavilion at the 56th Venice Biennale International Art Exhibition. Shiota has held exhibitions around the world and has collaborated on various performing art projects. She currently lives in Berlin. ©Gianni Plescia

‘There is a moment when the thin lines gather and spread out. And suddenly the lines cannot be traced by the eyes. When each thread is no longer visible, it seems that the truth inside it finally becomes visible.’  The thread does not create a boundary between the viewer and the work. Because of this, when you try to see Shiota’s work, you will often lose track of where you are. You will feel like you can see something, but you will fail to actually grasp the shape of it. That may be why people want to see her work again and again.  The culmination of Shiota’s work using threads came at the 2015 Venice Biennale, ‘The Key in the Hand’. The work, which was born through the painful experience of losing her father and son, used motifs of ‘going into a new world’, such as keys and boats, introducing a sense of light. However, after the work was completed, the thread that had been tightened was cut, leaving the work spinning idly. Even still, after struggling with illness, she had reached a point where she could no longer live without continuously producing something.

The new work exhibited at the Mori Art Museum, which was produced during this critical period, featured bronze-shaped body parts. ‘Some parts of the body may have been cut off during surgery and returned.’ 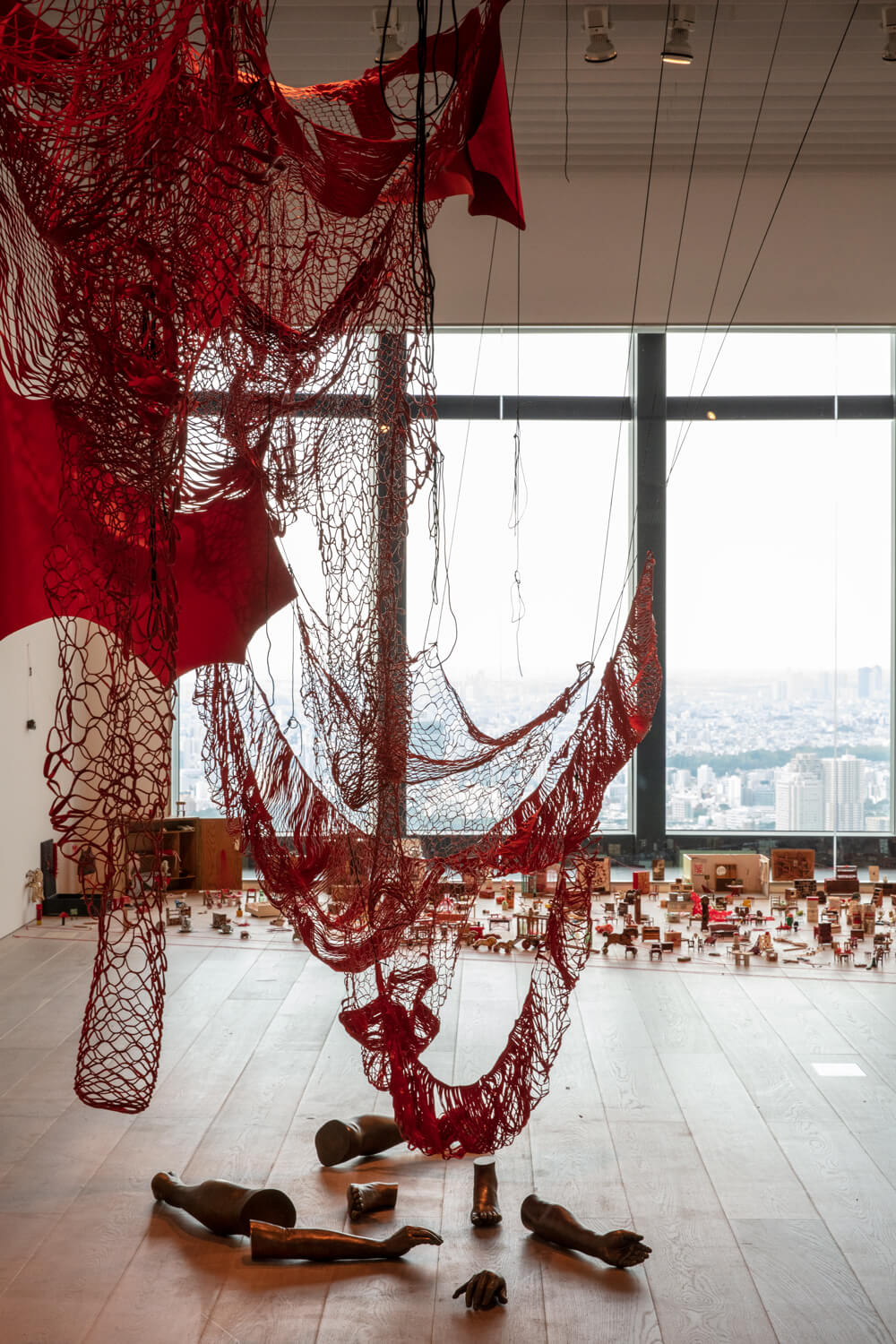 View of the 'Chiharu Shiota Exhibition' installation. The bronze arms and legs in the foreground are the piece 'Out of My Body', finished in 2019. 'When you take a mold, you can objectively see the shapes inside you', Shiota says. In the back is 'Connecting Small Memories', created using miniature dollhouse furniture, finished in 2019.

She is currently working on a new project using glass in her studio in Berlin. One work of glass that forms a soft shape also seems to be hard and brittle; it exudes a certain charm through its distinct texture. In another work, there are parts that resemble the buds of a vigorously growing plant, which are juxtaposed with the anxiety of them breaking. They have an overwhelming presence and vitality. 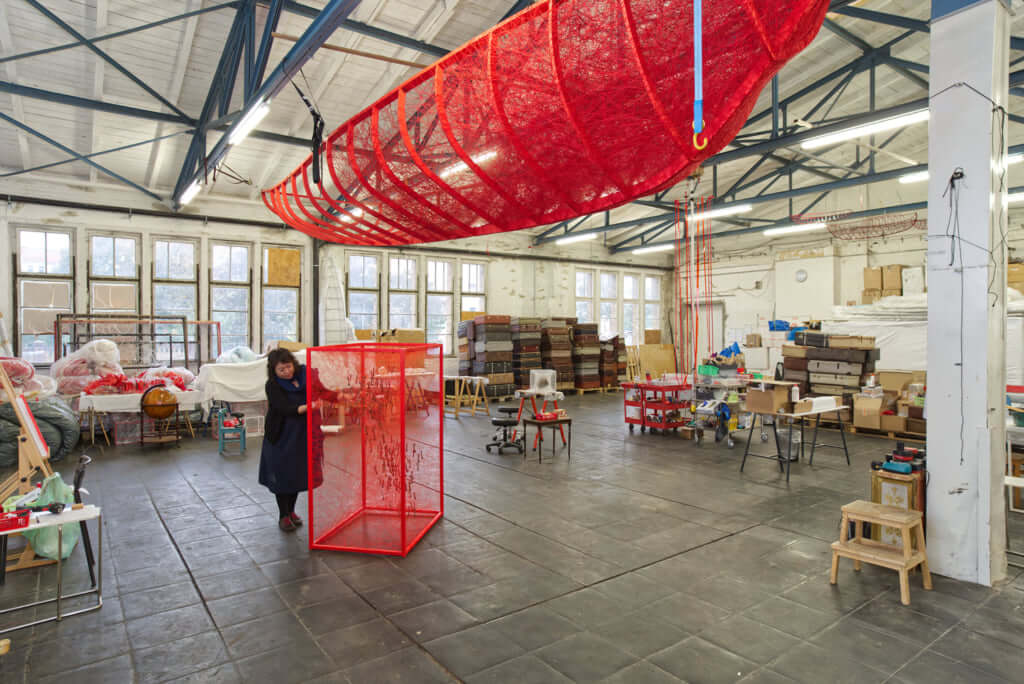 Her current studio uses a corner of a former printing factory. Measuring around 450 square metres, her work area contains collections such as old luggage and unfinished installations. 'I will collect things until the hole in my heart is filled', she says. ©Gianni Plescia 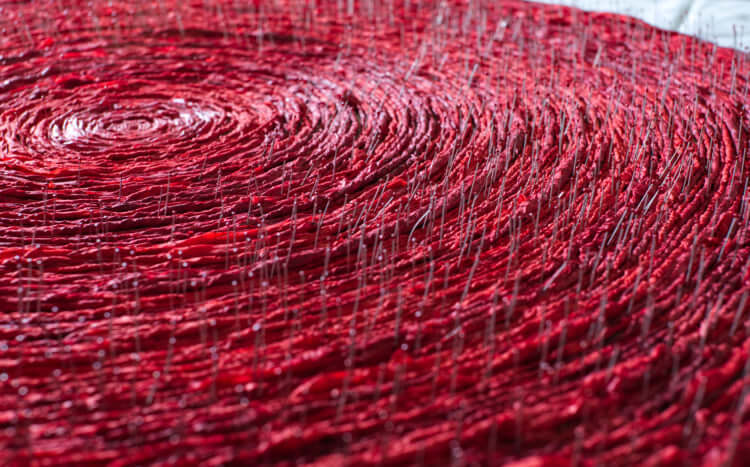 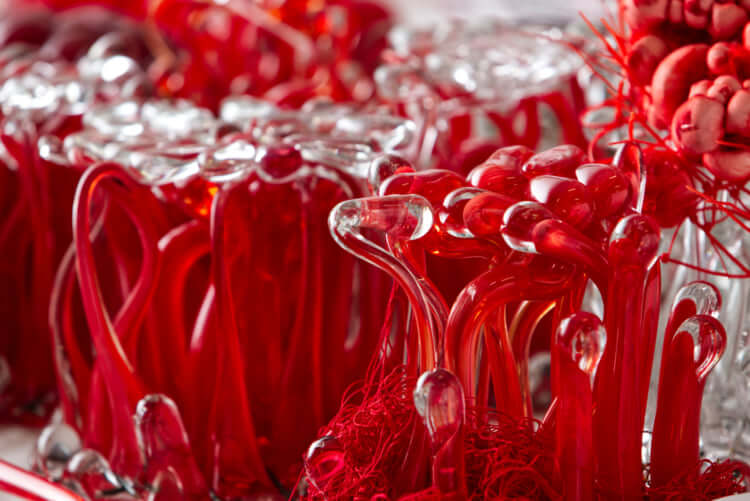 Right: Glass parts in the studio. They look like cells or plant buds. Even Shiota herself does not know what these will turn out to be. Left: 'Vortex', which has been the motif that has been interesting her lately. She would stab a pin on the swirling string and put red paint on it. 'It feels more like knitting, rather than producing a piece of art', she says. 'It has a calming effect.' ©Gianni Plescia 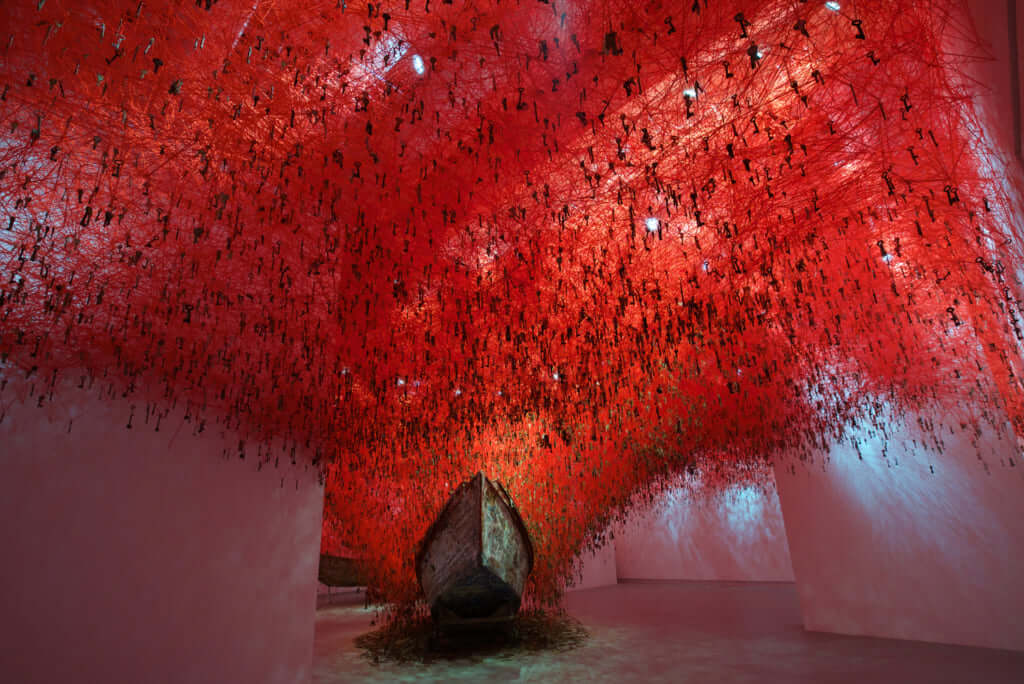 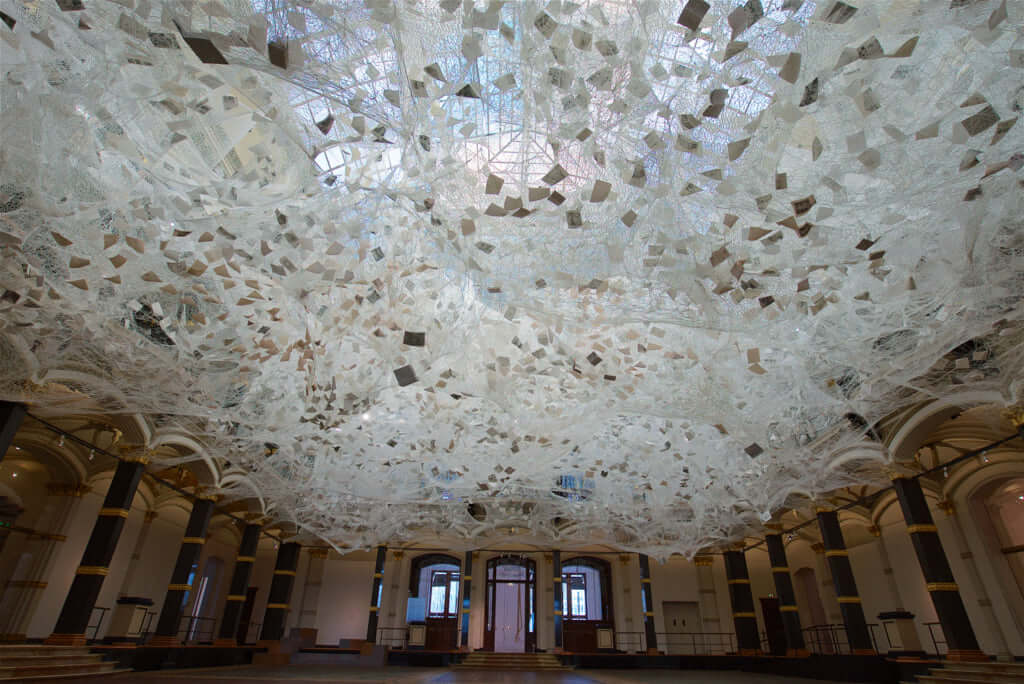 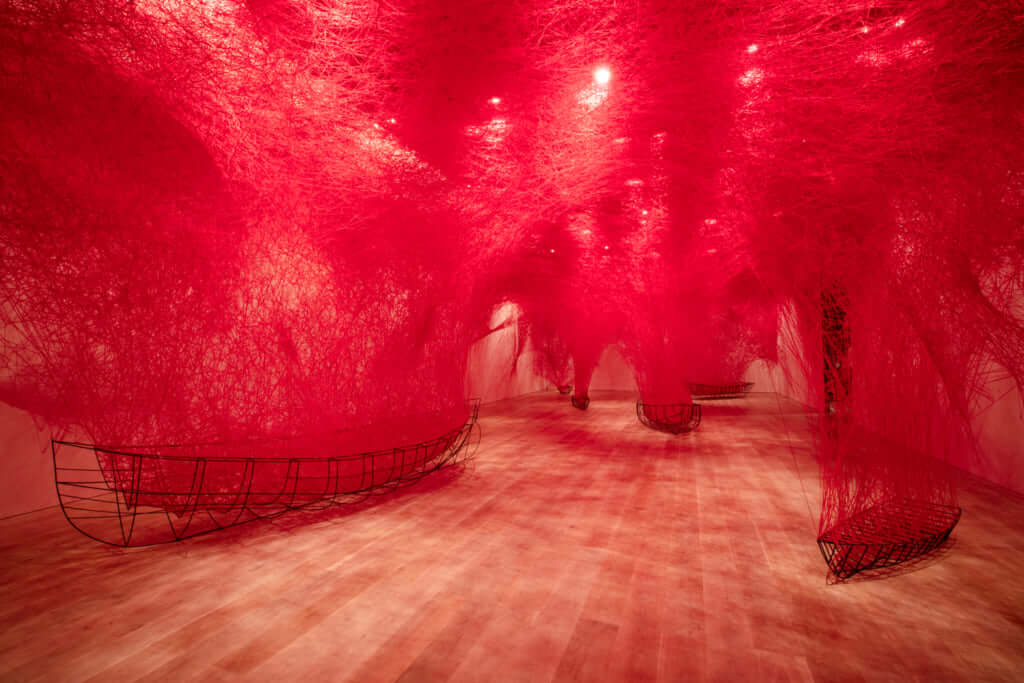