The Sources and Secrets of Japanese Tattooing 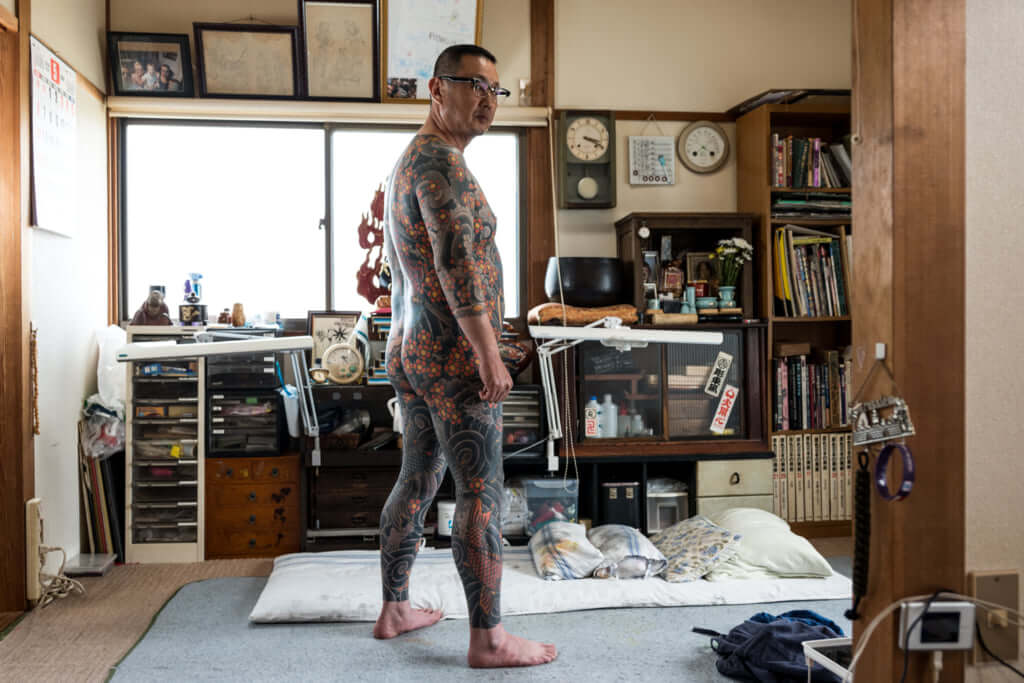 Inky forms trail across skin. Sometimes peeking out of a shirt sleeve, or otherwise replacing clothes entirely. Some are monochrome, others are colourful, but they always add to the aura of their beholder. Such embodied works of art have been immortalised by The Tattoorialist.

Photographer Nicolas Brulez, and author Mylène Ebrard, have travelled the world meeting tattoo artists and the tattooed since 2012. ‘Le Voyage dans la Peau’ (A Journey through Skin) is their fourth book. During 2018 they travelled to New York, Berlin, London, Paris and Tokyo, as well as Itoshima in the prefecture of Fukuoka in the south of Japan where they spent four days with Tsuyoshi Honda, one of the last tebori masters (a hand tattoo practice). It was, needless to say, a highlight of their trip.

According to Ebrard, Honda came to pick them up at the Itoshima train station in a large black van, accompanied by two yakuzas. It was difficult to communicate at first, using only Google Translate, which gave way to some entertaining misunderstandings. 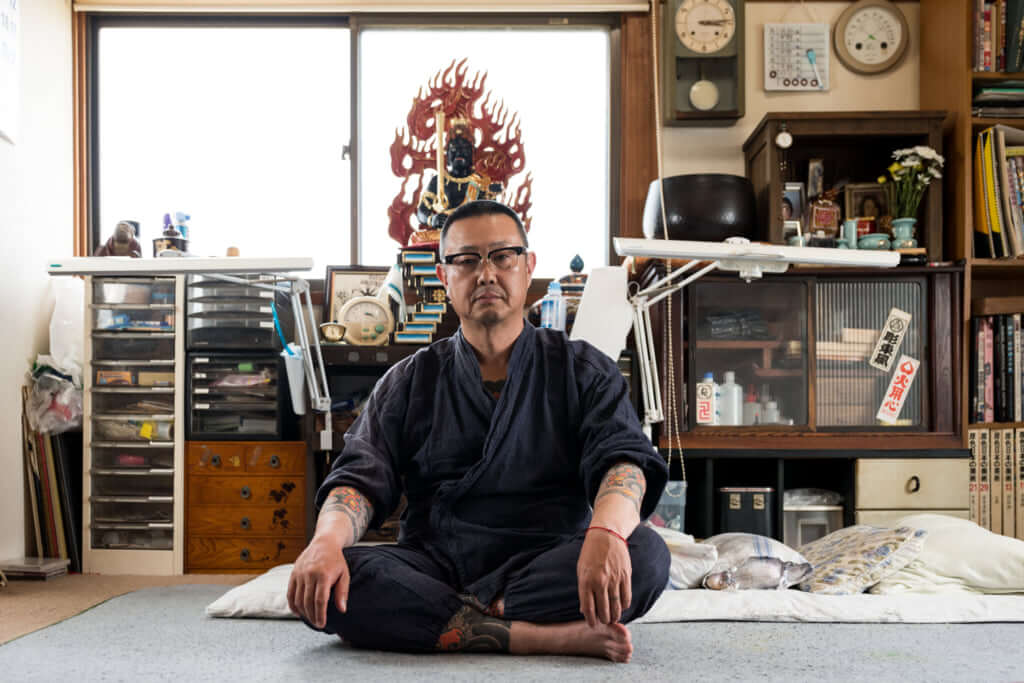 During their stay, the Tattoorialist duo were immersed in the world of the Honda, who, being an outstanding host, also showed them the region. They observed and captured the visits of a number of regular clients, including a number of yazukas who came to offer up their skin to the needle of the grand master. Honda practices ancestral techniques, unfortunately well on their way to disappearance. Using nothing but a wooden stick and a needle held together like a pen, he traces his figures in ink, sat at floor level, sometimes for over twelve hours.

Honda doesn’t do small pieces, he might start with a certain area, but he will extend across the whole body. It becomes a work that takes years, developing a sort of ritual.

According to Brulez, the most impressive part is the notion of value. To be tattooed this way in Japan is to live with a drawing on your skin. You enter into a culture and abide by the values of the clan. It is to be brave and virile and to not reveal that it hurts.

Brulez knows what he’s talking about; over the days spent with Honda, a friendship was formed between the three; a relationship that Honda payed homage to by tracing a drawing of a cherry tree on the arm of the photographer. 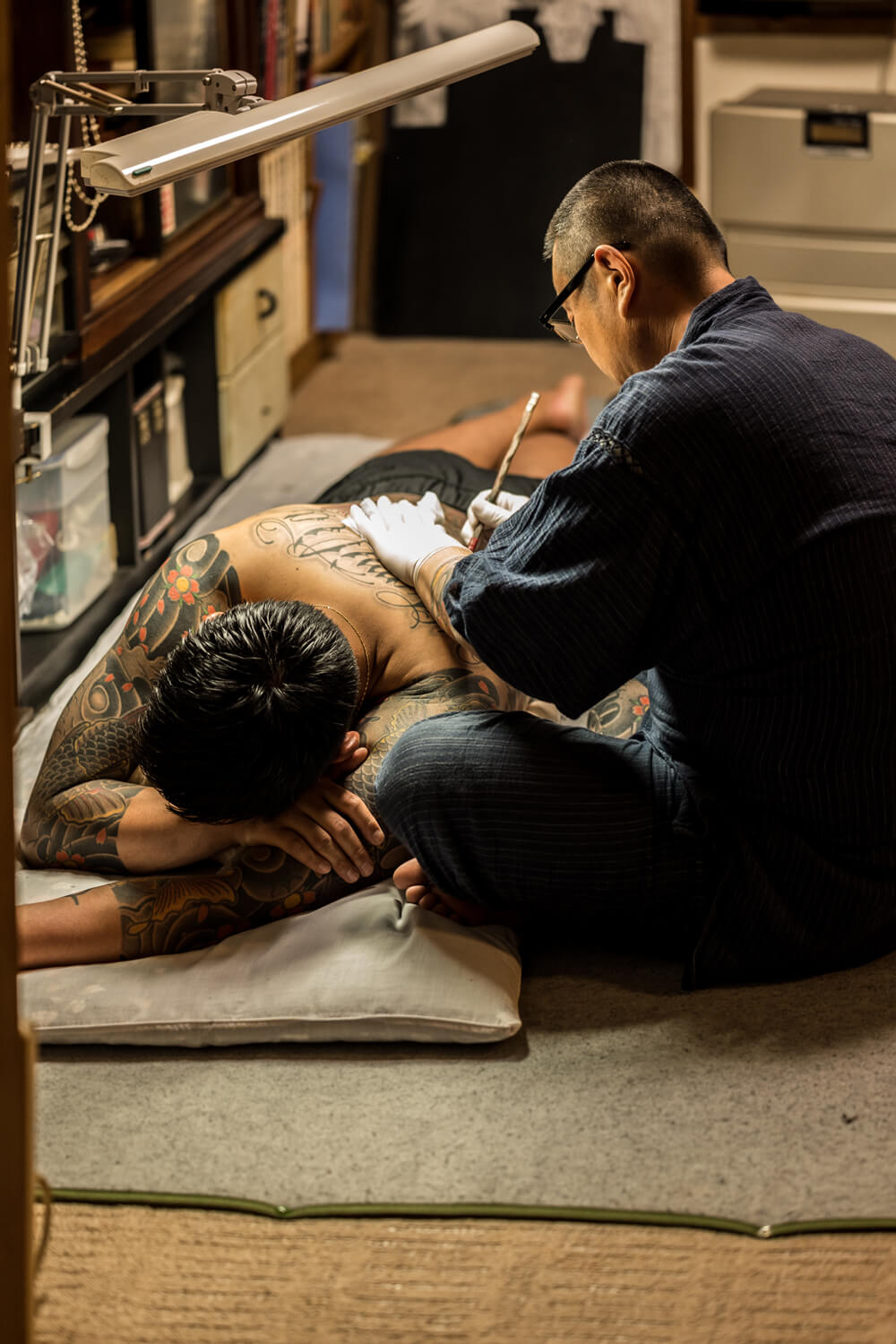 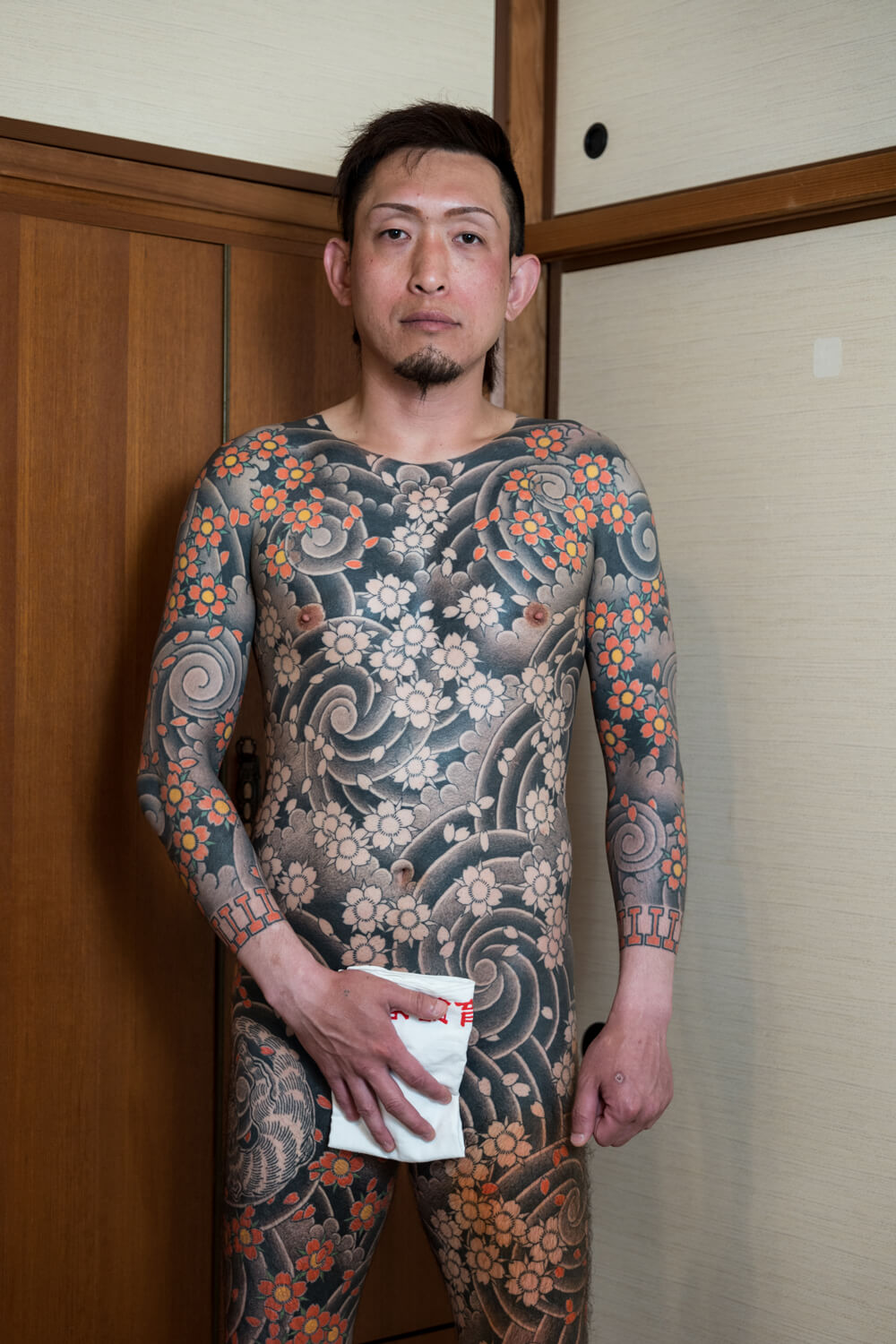 Once a popular art, now marginalised

The motifs of Japanese tattooing often play on mythological or historical figures. The art of tattooing (irezumi or horimono) has existed in Japan since the Jomon era (10,000 BC) and was successively adopted by both nobility and criminals alike. The Japanese state marked its prisoners, and was one of the last countries in the world to abolish this practice, state Brulez and Ebrard in their book.

It is thus largely thanks to the yakuzas that these traditional Japanese tattoo techniques are still preserved to this day. There is however surely a number of mythos and stories that have fallen into obscurity. The association between criminality and ink-marked skin however remains, and tattoos have become stigmatised in Japan. For example, it is for example forbidden to enter a public bathhouse with a tattoo for fear of creating a stir. To be tattooed in Japan is to share in the pride of wearing the country’s history and culture on your skin, as well as the shame of being branded a criminal.

It is for this reason that people with tattoos often choose to cover them up. You must be brave to show them off, even more to run a tattoo shop in a big city. Such is the case of Akatsuki, a tattoo artist from Tokyo whose salon, the Red Bunny, can be found on the second floor of a building in Kichijoji.

For Brulez, who takes the portraits, it was important that people with tattoos featured in his book showed their faces. When they found out that the publication would be marketed internationally, and not in Japan, a number of their models, including yakuzas, accepted to be photographed.

But the team from The Tattoorialist are not done yet. They would like to dedicate an entire publication to the history of yakuza tattooing in collaboration with the master Honda. They dream of publishing it also in Japanese in order to restore tattooing to the hear of traditional arts. 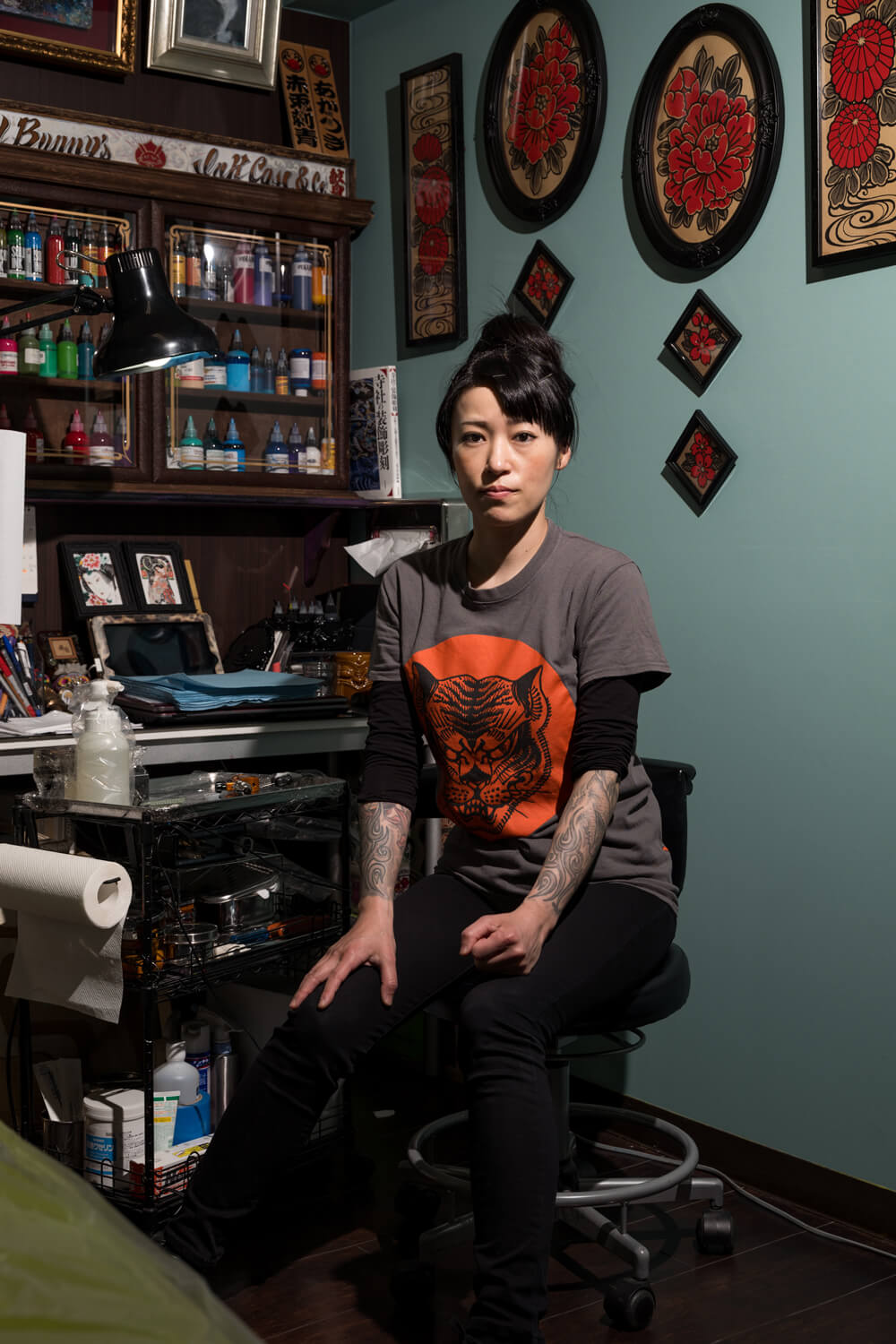 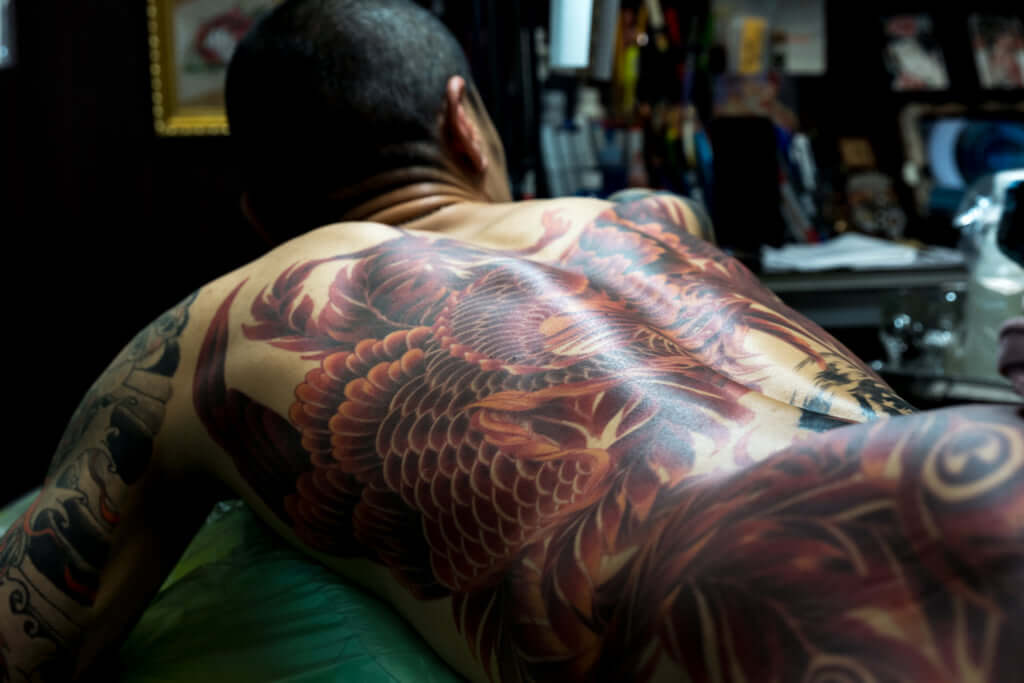 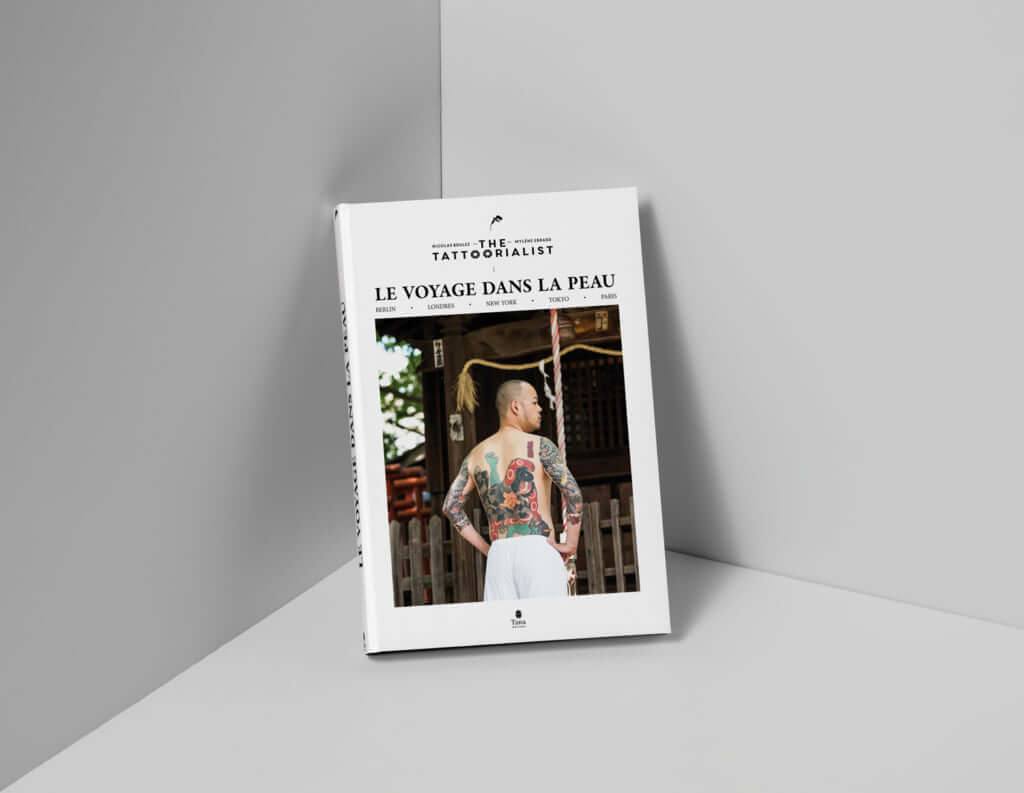