In his engravings, the artist reveals only clues. He prefers to rely on the unpredictable, the random nature of interpretation. 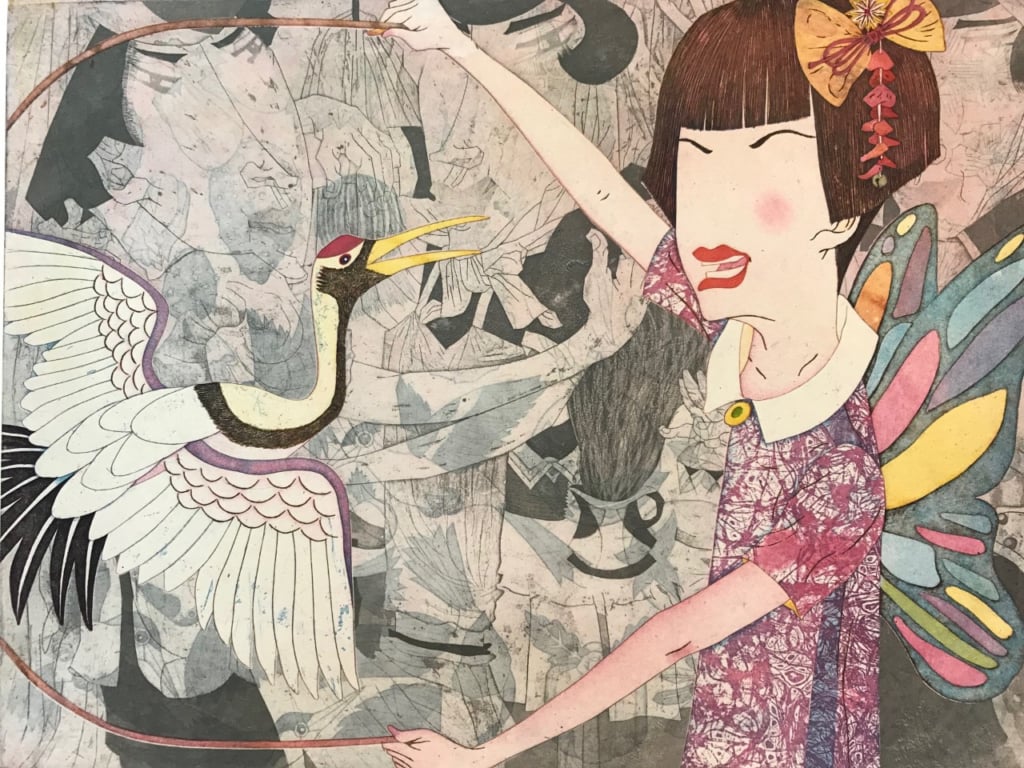 Satire, humour, or any kind of emotion are nowhere to be found in the eyes of the characters presented in Yuji Hiratsuka’s engravings. This is for the simple reason that their eyes are not depicted. Nevertheless, the way in which the artist plays with cultural references, colours, and staging invites the public to detect a message there. As Yuji Hiratsuka explains to Pen, ‘by leaving less facial features (no eyes), the viewer can extend their imagination… I like ambiguity.’

A seasoned engraver, the artist, born in Osaka in 1954, settled in the United States in 1985 to pursue higher education in engraving. It proved to be a one-way trip, as he has now been teaching this technique at Oregon State University for over 30 years.

Works inspired by an impressive collection  of archives

Yuji Hiratsuka’s work is figurative. However, interpretation is required to reveal the metaphors and symbols it conceals. ‘Regarding my artwork, I apply a sense of the ukiyo-e style (very flat, decorative, bright, etc.) to western (American) fashion, furniture, etc…’

The artist, sensitive to the zen tradition, simply likes to suggest and give clues. His primary source of inspiration lies in his archives, made up of photographs, mainly black and white, gathered from books, magazines, or newspapers. Yuji Hiratsuka’s engravings present subjects dressed in a modern style, while elements of contemporary culture also appear, like Cup Noodles in the piece entitled Cups, wings, fortune teller (2021). They also contain metaphorical elements like fruit, vegetables, animals, and furniture. However, other markers relate back to wood engravings, particularly regarding the tone, colours, and scenery.

The first thing that is constantly mentioned when discussing Yuji Hiratsuka’s engravings, however, is the non-representation of the eyes of the human figures he depicts. This decision is motivated by a desire not to enter the private world of the characters, as the artist considers the eyes as the most likely to reveal the subject’s feelings—this decision therefore leads the public to interpret things for themselves.

This random, unexpected dimension also rests on the technique employed by the artist: a complex engraving process. ‘My interest is always based on an unpredictable texture that is printed from the etched surface of the copper plate. My prints explore the complex relationship between paper, ink, and etched plates to describe my thought, as well as the relationship that occurs between figures and space to express other human experiences’, Yuji Hiratsuka explains. His approach aims to suggest rather than express. His subjects are depicted in action, and he often duplicates faces and bodies within the same engraving.

One question remains: is there a message, an opinion in this work? ‘Yes, I [tease] society, culture, make fun of things, but [in a very fair] manner. I don’t want to get into a serious conversation, argue, or upset viewers. But I still want to incorporate a level of sarcasm, a little irony.’

Yuji Hiratsuka’s work can be viewed on his website. 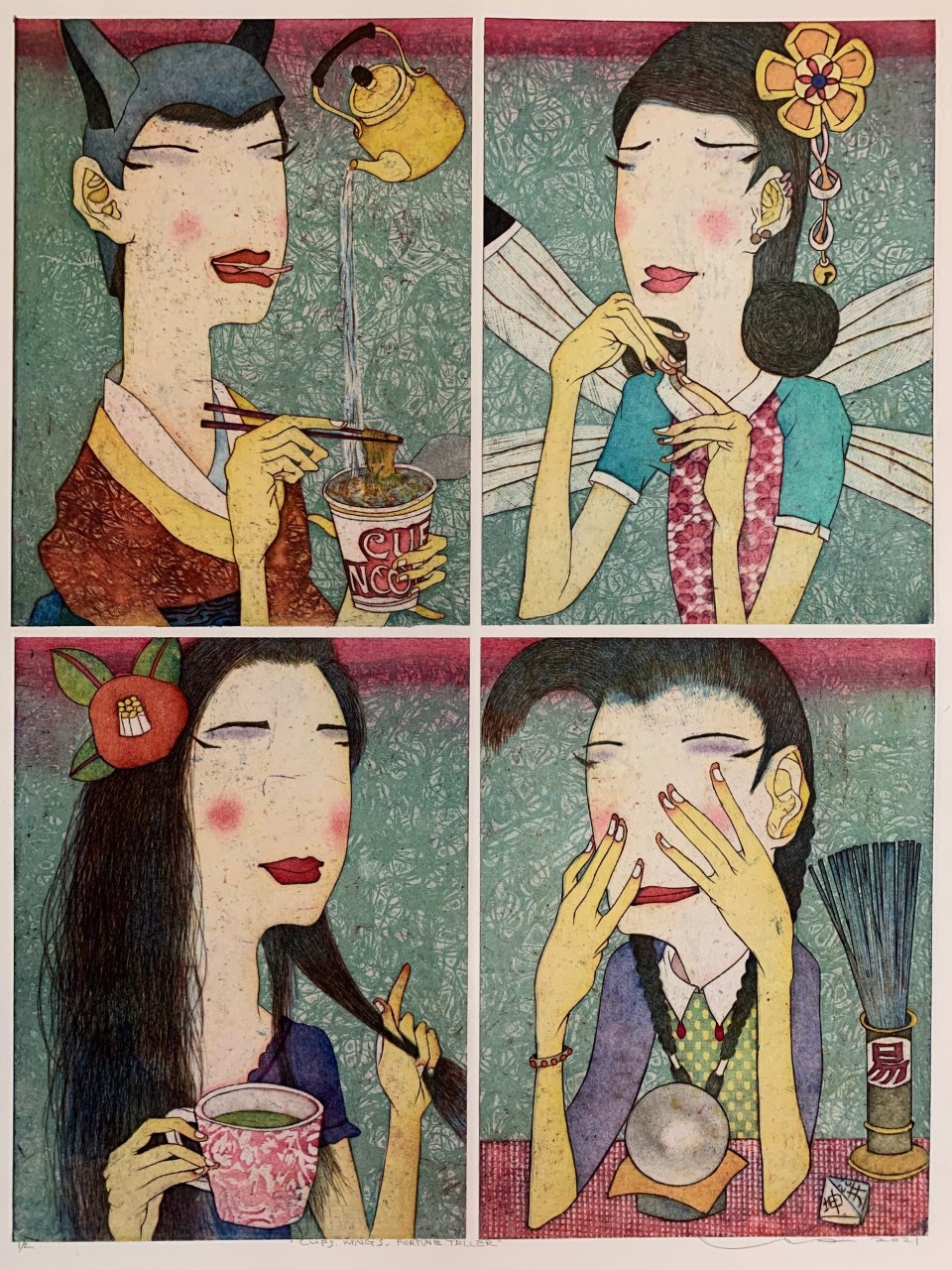 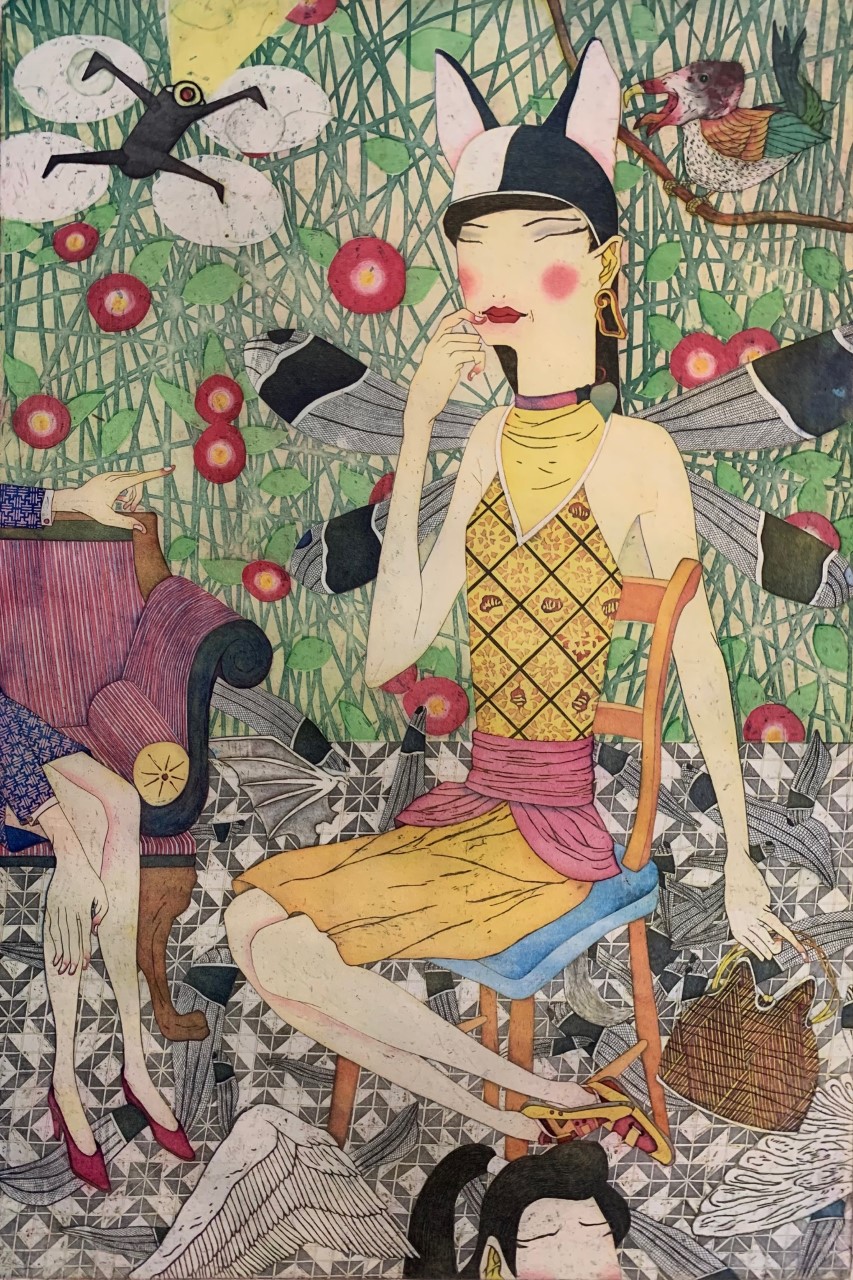