Mishima, Heir to the Samurai Tradition

Throughout his life, the writer made the precepts of Japanese warriors his own, from their code of honour to their approach to death. 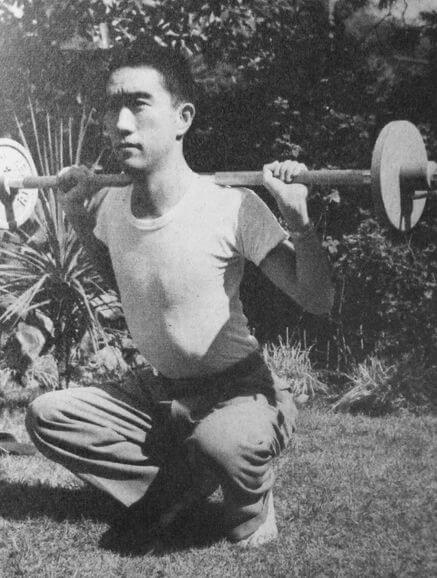 ‘I discovered that the way of the samurai is death’, writes Yukio Mishima in his work Hagakure: Samurai Ethic and Modern Japan, published in 1967. The question of death was a central theme in the life and works of the writer. This obsession came to a head on 25th November 1970 when Yukio Mishima committed suicide by seppuku, a hallmark of the samurai tradition to which he considered himself the heir, stabbing himself in the stomach before being decapitated.

Yukio Mishima was 45 years old at the time and a successful author, as well as a playwright and poet. Three years previously, he had released Hagakure: Samurai Ethic and Modern Japan, which is an in-depth study of one of the texts that guided his life: Hagakure, a 17th-century treaty that sets out the fundamental principles of the samurai order, composed by Jocho Yamamoto.

Yukio Mishima discovered this work during the Second World War, before it disappeared from Japan after Hiroshima. He assimilated the radical stoicism displayed by these ancient Japanese warriors and strove to follow the samurai codes: honour, loyalty, courage, goodness, and rectitude. The author of The Temple of the Golden Pavilion went so far as to find similarities between the development of values at the start of the 17th century and that of the 1950s. He also established a commonality between himself and Jocho Yamamoto: the act of rejecting and protesting against their time.

In the final years of his life, Yukio Mishima was fascinated by death. The theme is very present in his final books, such as The Sailor Who Fell From Grace With the Sea or Life for Sale, and became the cornerstone of his system; not as a kamikaze passion, but rather as a duty to enhance his life. ‘If one wishes to become a perfect samurai, it is necessary to prepare for death morning and evening, day after day. The samurai who is constantly prepared for death has mastered the way of the samurai, and will be able to devote his life unfailingly to serving his lord’, writes Yukio Mishima in Hagakure: Samurai Ethic and Modern Japan.

The author adhered to this preparation, which would culminate in his suicide. His death was an exploit that provoked a reaction from his contemporaries, like author Henry Miller, who states in On Turning 80 that the Japanese author ‘wanted to reestablish dignity, self-respect, true brotherhood, faith in oneself, a love of nature rather than efficiency, of one’s country rather than chauvinism, the emperor as a symbol of commandment, rather than the anonymity of a stupid herd, obedient to ideological changes, the values of which were set by political theorists.’ Marguerite Yourcenar dedicated an essay to him, entitled Mishima: A Vision of the Void and declared in The Sea of Fertility that ‘Mishima’s death was one of his works, and the most carefully prepared of them.’

Hagakure: Samurai Ethic and Modern Japan (1979 for the English translation), a book by Yukio Mishima, is published by Penguin Books (out of print in English). 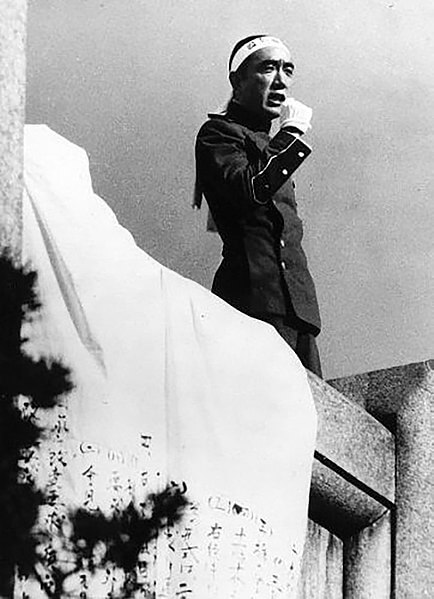 Yukio Mishima delivering a speech on the balcony of the Japan Ground Self-Defence Force (JGSDF) building in Tokyo in 1970, before committing suicide using a short sword © ANP scans 8ANP 222) 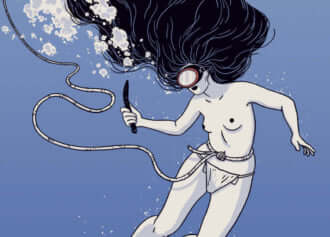