In a little coastal village in Chiba Prefecture, the ceramicist creates pieces marked by their territory and by time and its effects.

Natural clay from Shiga Prefecture, simple, natural materials from the soil, using both ancient and contemporary techniques. Kazunori Hamana’s ceramics are the work of a self-taught artist who draws upon the history of the discipline and the magic of the natural environment and its impermanence.

Born in Osaka in 1969, he left the family home at the age of 15 to stay with farmers in Hyogo Prefecture, then learnt to work the land and rear livestock at an agricultural school. He then attended MiraCosta College in San Diego, California, before returning to Japan and opening his own restaurant in Tokyo, as well as a shop selling trainers.

Since he settled in a little coastal village in Chiba Prefecture in 2008, Kazunori Hamana has divided his time between fishing, organic rice farming, and ceramic art. His practice rests on the latter activity, this living environment, and this set of interests.

‘I don’t want to fight with nature, so I follow it’

The vases, cups, plates, and urns the artist creates are marked by their territory, that of the seaside where, after being fired, they are placed outside—in the sun, amidst the flora, in rice fields—and age with the passage of the seasons and rainfall and are worn and etched by these traces to which the artist adds shapes, often geometric in nature.

Passionate about 17th-century ceramics but also influenced by Cy Twombly, Alberto Giacometti, Isamu Noguchi, and Jackson Pollock, he explains to Klassik Magazine: ‘I am very interested in the symbols found on ancient pottery (such as that of the Jomon or Yayoi era). I suppose the urge to include symbols grows naturally from that interest, even though I am living in the modern age? I am still exploring where this impulse comes from.’

In shades from bone white to grey-blue, his ceramics could appear reminiscent of shells, subjected to the effects of the swell, scratched by its movements. ‘Clay is a natural thing; it changes. I don’t want to fight with nature, so I follow it’, the artist explains on the website for his gallery, Blum & Poe. Inspired by traditional Japanese tsubo, functional clay pots that date back to prehistoric times, he incorporates modern techniques, particularly in the glazing, firing, and colouring processes.

Kazunori Hamana is an ally of time and its action, what it adds and what it takes away.

Kazunori Hamana’s work can be viewed on the Blum & Poe gallery website and on the artist’s Instagram account. A catalog published in conjuncton with the exhibition Tsubo at Pierre Marie Giraud (Brussels) in 2020 is available here. 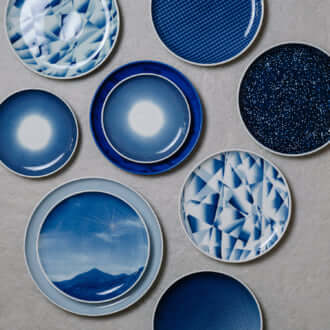 Collaborative and Multicultural Ceramics at Made by Kihara