Naomi Okubo, Hiding One’s Face and Refusing to Be Trapped

In the series 'Wardian-Cased', the artist subtly illustrates the contradictions of our society and what we refuse to face.

Social media and the floods of images to which we are subjected strengthen the sense of a social, behavioural norm and arouse the fear of being judged when we move away from it. They force us to accept our own personality and trap us in a ‘social cage.’ Japanese artist Naomi Okubo works based on this observation and its consequences on our social and natural environment, following a meticulous creative process.

Born in Tokyo in 1985, Naomi Okubo trained at Musashino Art University, before moving to Brooklyn. In 2020, during the pandemic, she returned to Japan. Her most recent series, Wardian-Cased, produced in 2020, led her to continue to develop the thought process that initially guided her work. ‘We could see the contradictions of our society that had actually been there for a long time. Many people, including me, realised our mundane life is much more precious than what we admired before. I wonder how can we take each other’s hands, go out of the suspicious utopia and walk to the wilderness? This is the question that I’m holding’, Naomi Okubo explains.

Trapped in an illusion

The artist first took an interest in the issue of image, and the attitude that society expects from an individual as an adolescent, when she was confronted by social judgement and the personal complexes it creates. Thus, these codes relating to belonging and social behaviour are in fact assimilated as if they were norms, to the detriment of those who do not feel as though they fit into this framework.

By examining her own feelings, the artist represents, in an overcrowded universe—full of plants imported into human, artificial structures—lifeless characters. These young girls, whose style is inspired by the artist herself, hide their faces, look away, try to avoid the judgement of others, and are constrained to stay in a state of shyness, on the sidelines. This dreamlike world seeks to be an allegory of a society in which inconsistencies and personal suffering are hidden under a deluge of ‘beauty.’

At the heart of Naomi Okubo’s work lies a technical process that she follows systematically: ‘It starts from collecting images from various media and making a digital collage with my own self-portrait as a draft. Then I use a projector to trace the outlines. Even though some of the parts look like real fabric or digital prints, these are all painted by my hands. I just wanted to make sure of that part. Touching the painting materials and painting everything by hand is the process to get back to reality for me’, the artist explains to Pen.

For the Wardian-Cased project, the artist took inspiration from the ‘Wardian case’, the first model of a portable terrarium, invented by Dr Nathaniel Bagshaw Ward in around 1829. After discovering that the plants in his London garden in Wellclose Square were affected by pollution during the Industrial Revolution, Nathaniel Bagshaw Ward invented these airtight structures to help his ferns to grow better. Naomi Okubo drew a parallel between this tale and her current situation when, on a summer’s night on a roof in Brooklyn covered in wild flowers, she noticed huge water tanks on the horizon. ‘The  juxtaposition between the wildflowers, the tanks and the sunset on Manhattan was almost like a scene of science fiction and it was shocking to me. At the same time, I felt it showed the contradiction of our whole world we are living in’, she declares.

Although the ‘Wardian case’ has given us a better understanding of our ecosystem, it, much like our society, has made it difficult to ‘see the outside, which is actually polluted if we are inside, breathing warm, clean, humid air surrounded by seductive plants and butterflies. We can easily ignore what is actually happening outside even if we know that a comfortable utopia isn’t genuine and we might just be trapped by it’, the artist concludes. 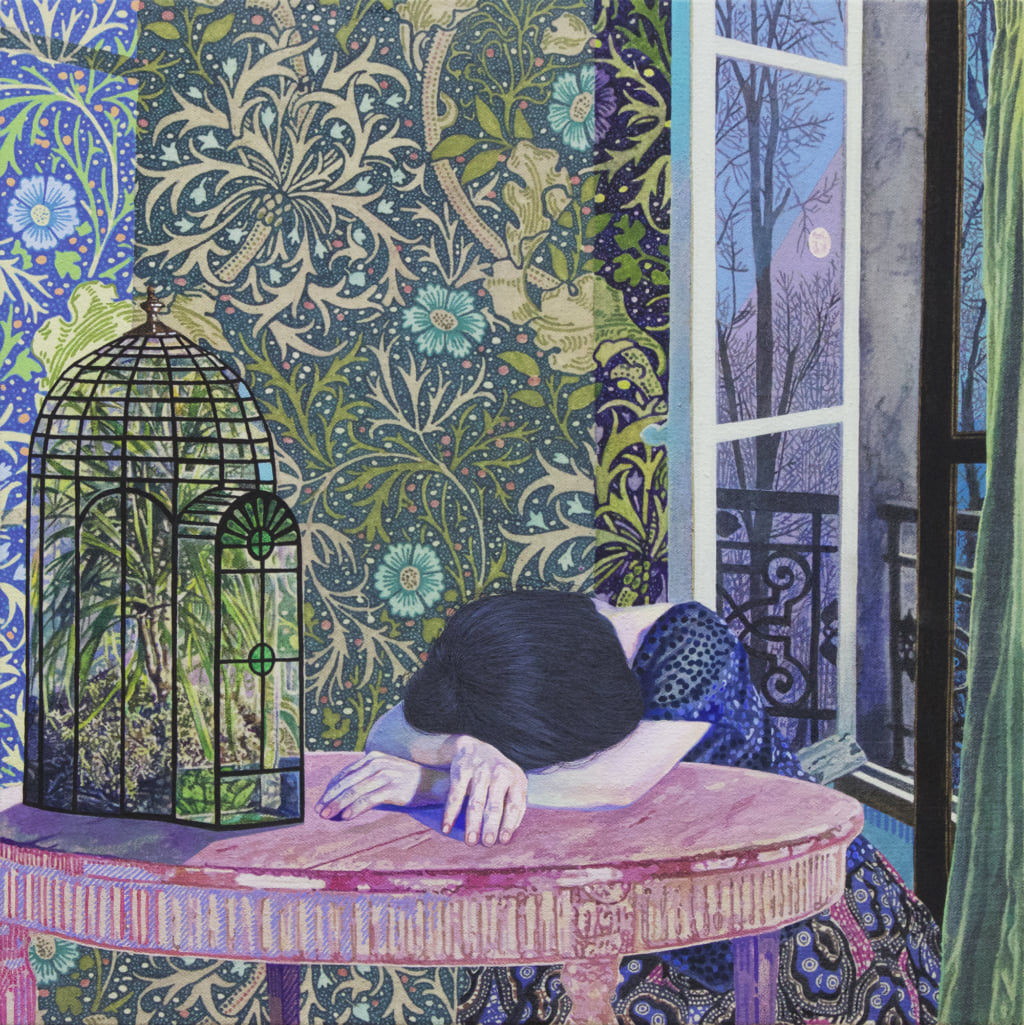 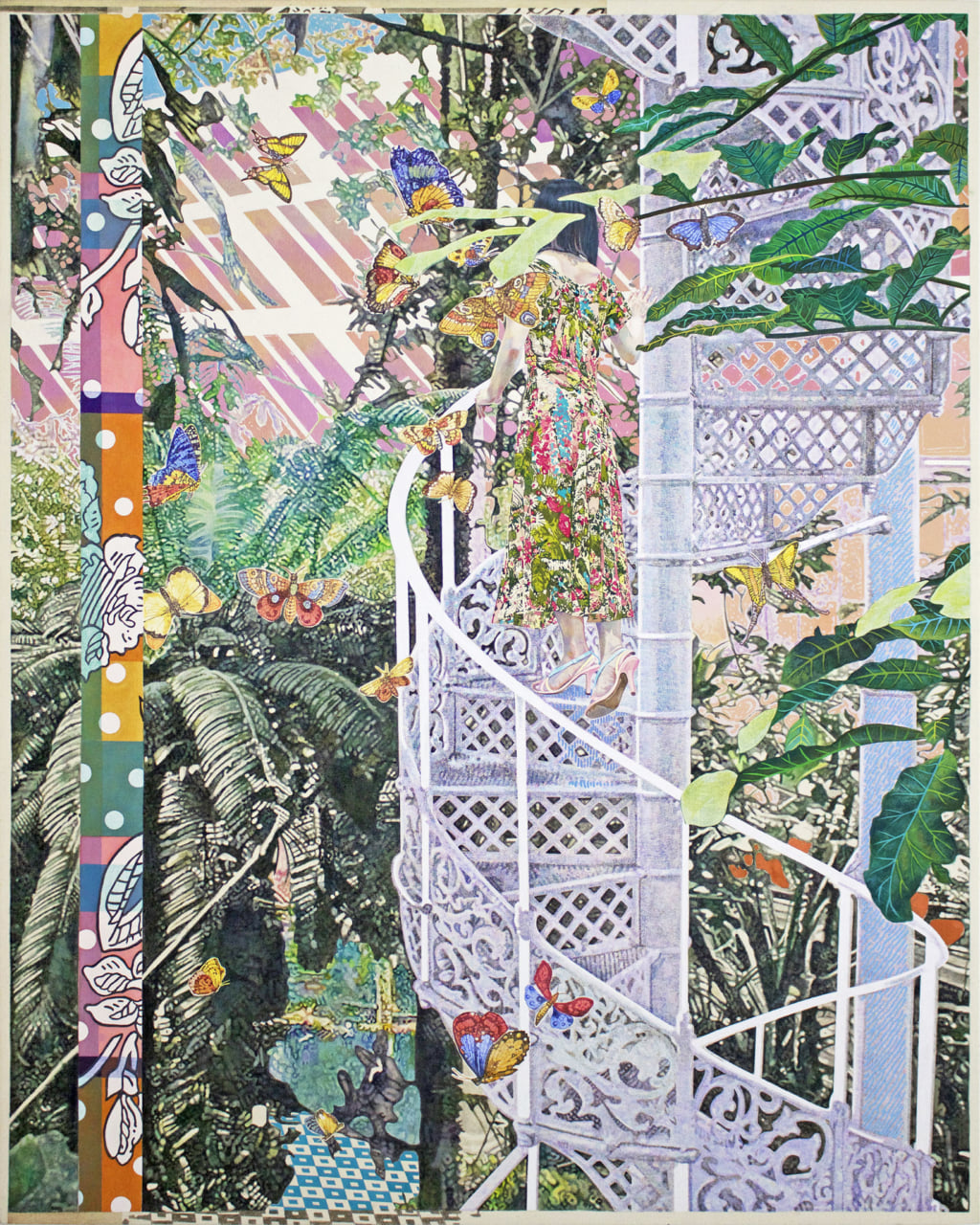 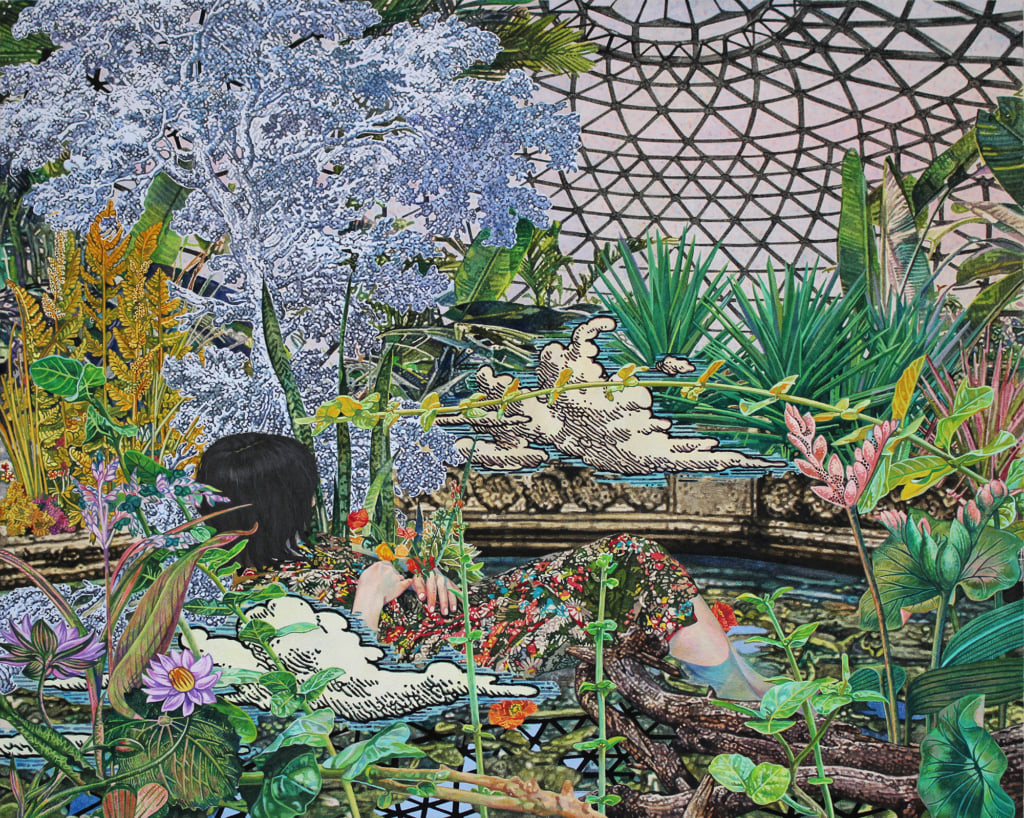 'As one incapable of her own distress, Or like a creature native and indued unto that element' (2020) 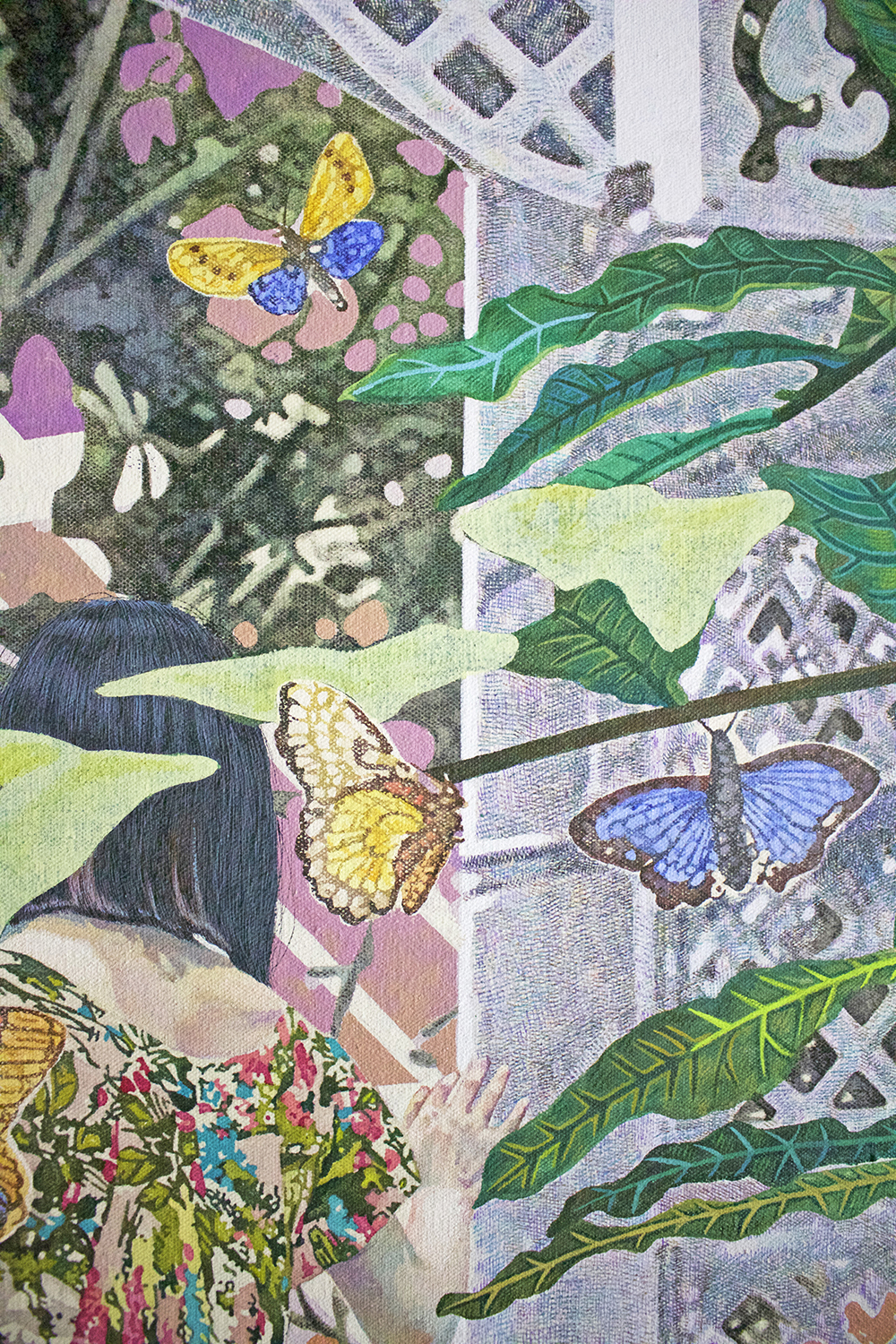