‘The Art of Sushi’ by Franckie Alarcon

In this book, the author shares an illustrated story that traces the journey travelled by sushi from sea to plate. 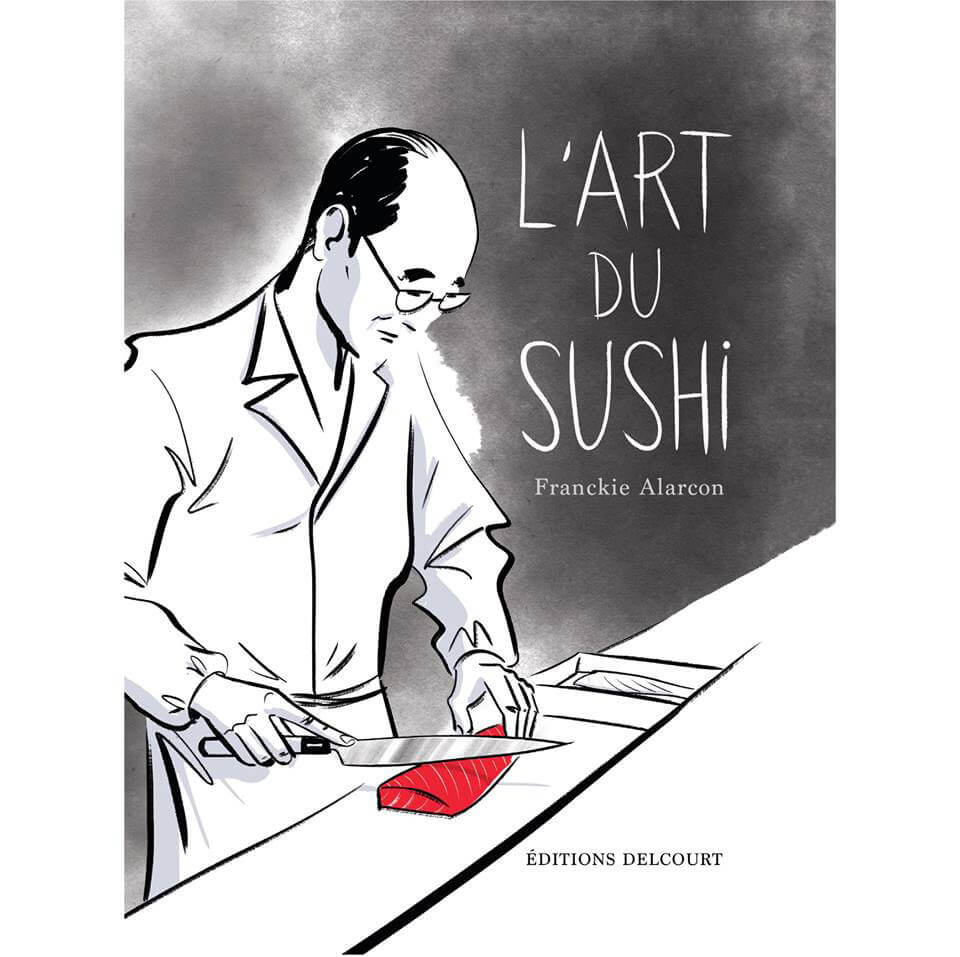 Mouthfuls of raw fish are an integral part of Japanese cuisine and need no introduction. But how many people know just how many hours of hard work are required to put together these dishes that are devoured in a matter of seconds? And just how many people, from the fisherman to the Michelin-starred chef, work together to elevate fish flesh to the status of art?

Franckie Alarcon seeks to answer these questions in L’Art du Sushi (The Art of Sushi), published by Editions Delcourt. It is an illustrated story narrated in the first person that traces the journey of sushi from sea to plate. The foods are all characters in their own right and stand out against the black-and-white minimalism of the scenes thanks to their bright colours. ‘I can recognise shellfish and sketch them from memory’, the artist explains. ‘But I wanted the drawings of the fish to be precise, so I took inspiration from photos taken on the spot.’

Franckie Alarcon discovered the joy of sushi when he arrived in Paris in the early 1990s. The Breton illustrator was accustomed to shellfish and, until then, had never imagined eating fish raw. Japanese cuisine aroused his curiosity and so he made his first trip to Japan, which lasted over two weeks, in 2015, accompanied by his editor David Chauvel and their partners. Together, they sought to understand why Japan is the land of sushi.

An initiation to the Tsukiji fish market

Their first stop was the Tsukiji fish market (which relocated in 2019 to Toyusu district in Tokyo bay) in the company of sushi master and holder of three Michelin stars, Hachiro Mizutani. The latter, not lacking in humour, tells of his surprise at seeing ‘very, very dead’ fish on market stalls during a visit to France. The chef prefers to select his fish while it’s still alive. He then leaves his supplier to prepare the fish according to a practice named ikejime, which allows the fish to be killed but its freshness to be preserved at the same time. All of this is done so that Mizutani can control the ageing of the flesh in his restaurant depending on his desired flavours.

Franckie Alarcon was also struck by the lack of the smell of fish at Tsukiji, which he visited three times during his stay. This is another difference between Japanese and French markets such as Rungis. ‘We have a lot to learn about fish processing’, he explains.

Absorbing the flavours of sushi

He also takes the reader with him on his journey to learn about the taste of sushi. The training required to become a traditional sushi master like Hachiro Mizutani is long and difficult, and chefs generally only touch fish after three or four years of experience. Some chefs, however, like young Daisuke Okada, break from tradition, using types of fish rarely found in this kind of dish. In his restaurant, Sumeshiya, he serves up innovative and incongruous varieties of sushi such as mizutako, made from giant octopus, and shark sushi.

Far from being restricted to simple mouthfuls of fish, L’Art du Sushi also examines the whole ceremony involved in eating sushi, from etiquette to the dishes used, through the story of a trip to a ceramicist. The introduction to different types of sake, and to those that go best with sushi, completes this comprehensive, pedagogical guide that will appeal to sushi novices and regulars alike. Not forgetting the list of top sushi spots in France and recipes that can be found at the back of the book, this volume allows readers to jump in at the deep end themselves.

L’art du sushi (2019) by Franckie Alarcon, is published by Editions Delcourt, only in French. 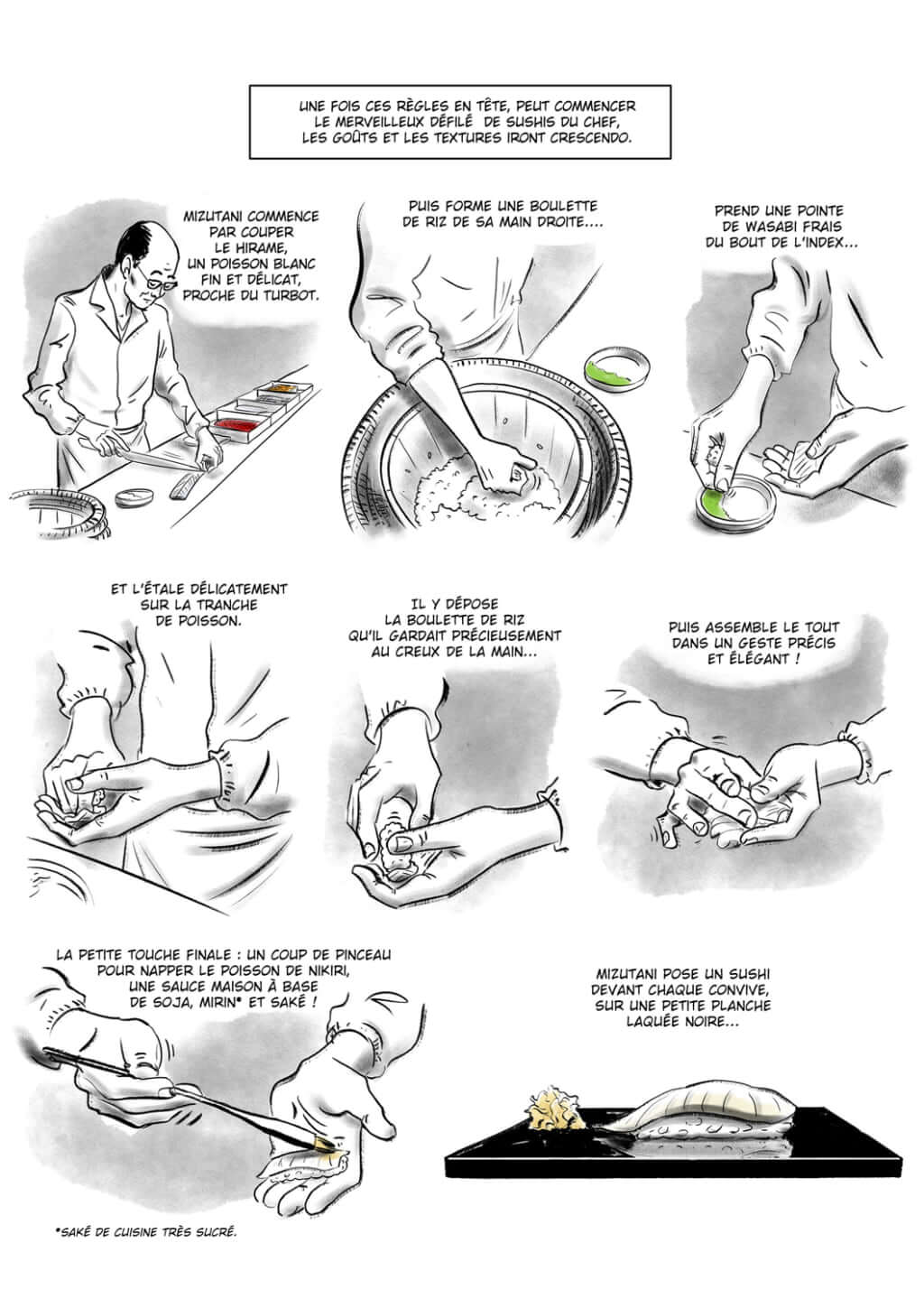 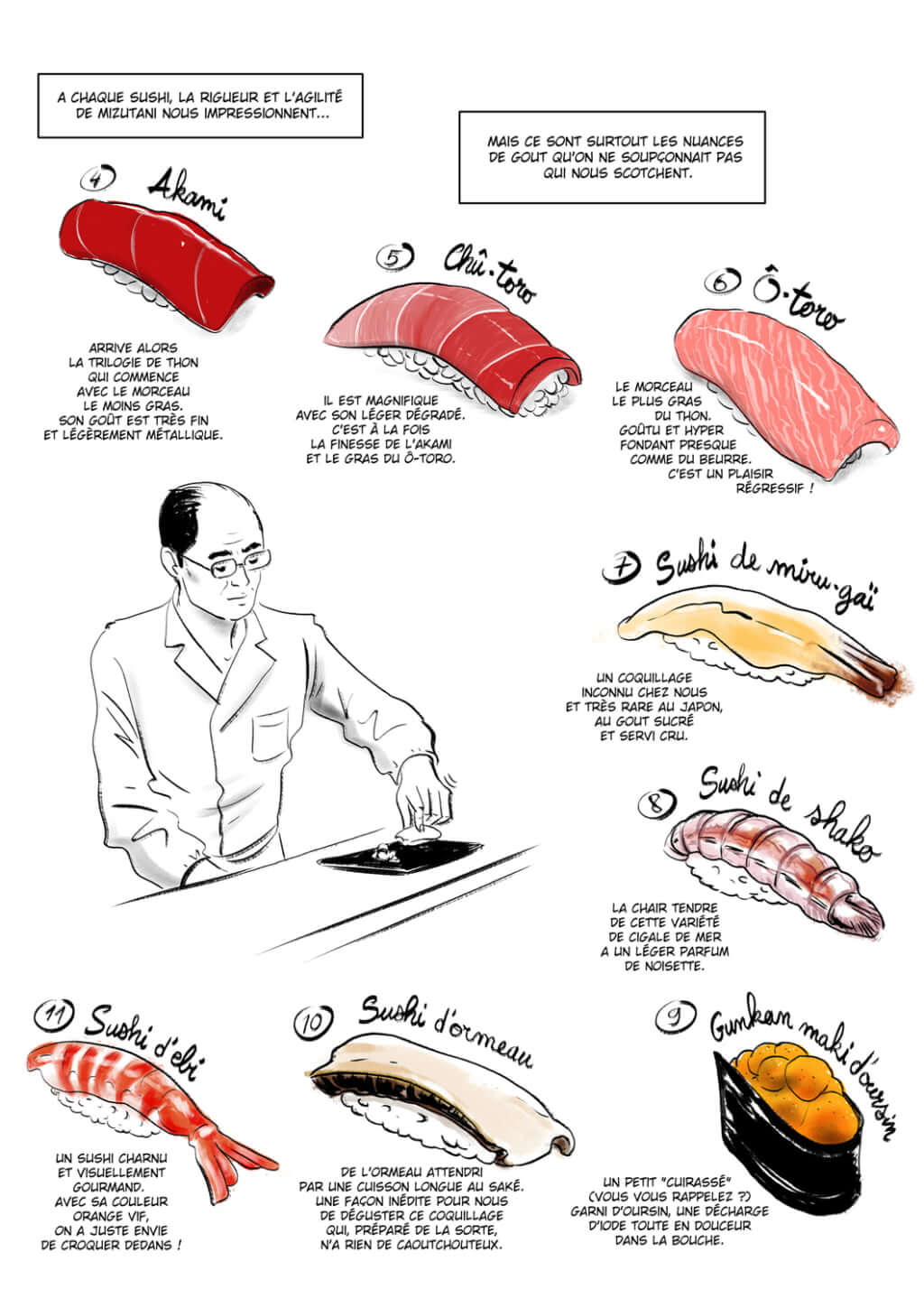 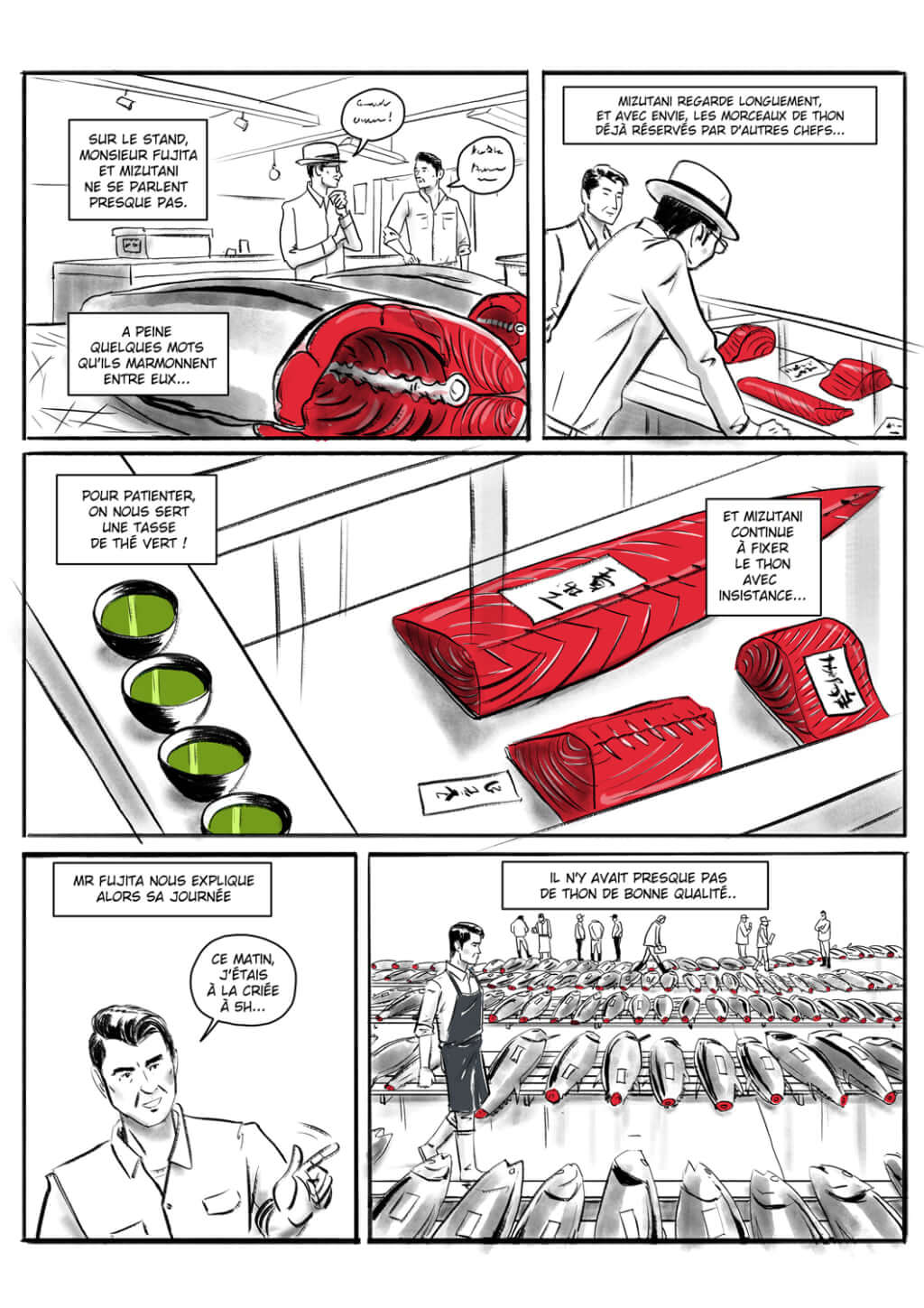 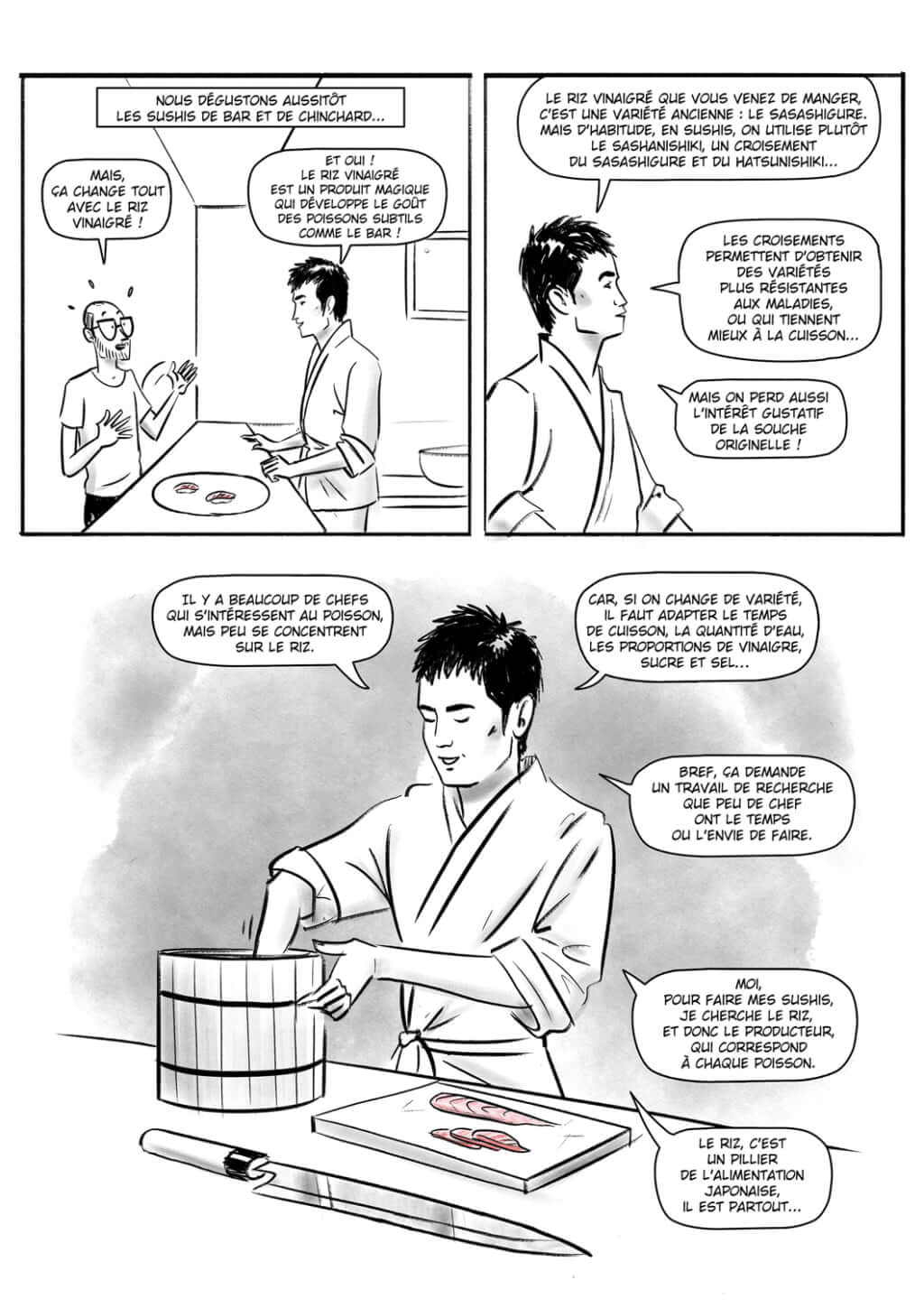 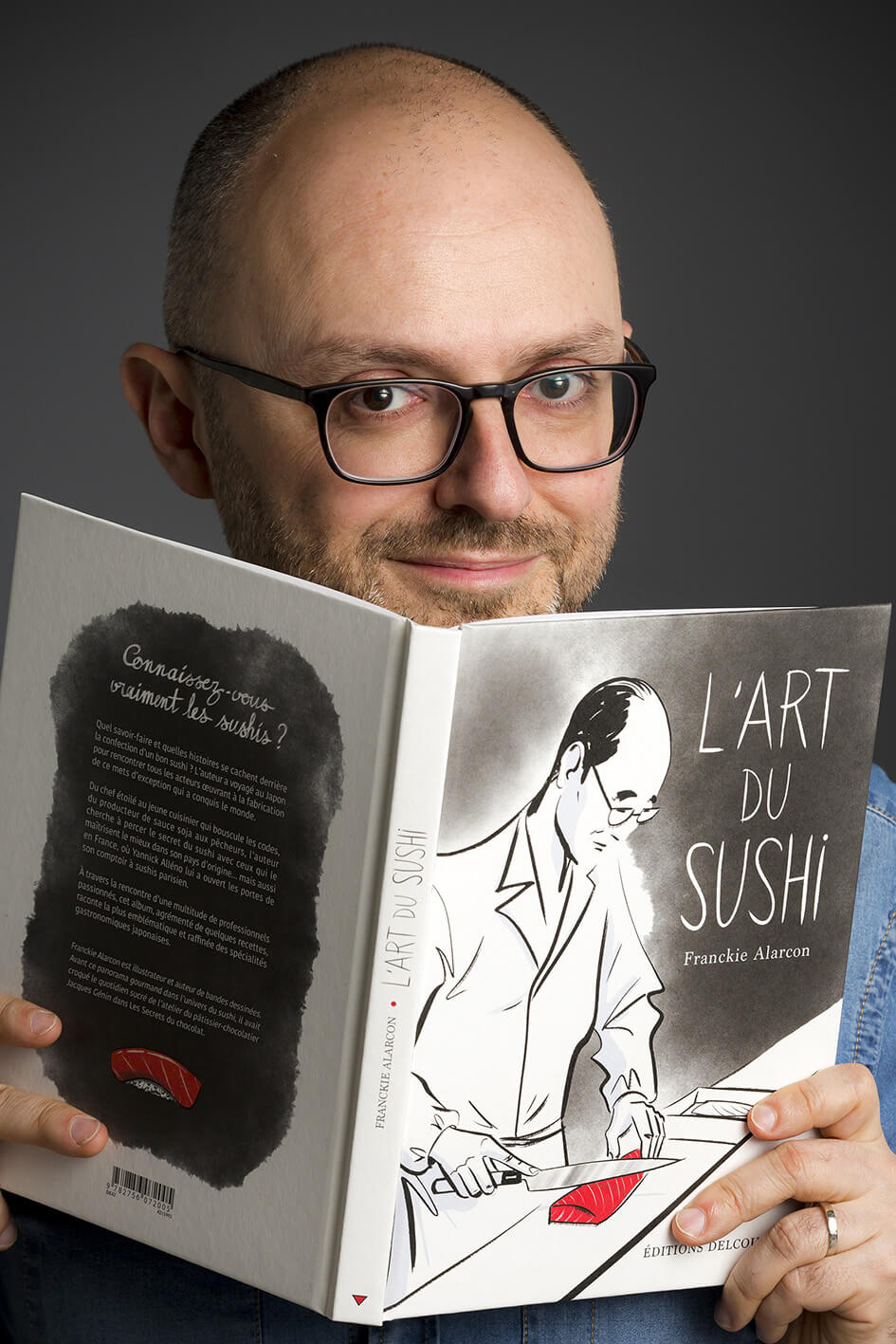