Architect Kengo Kuma refurbished this centuries-old ryokan by returning to its original materials: wood and bamboo. 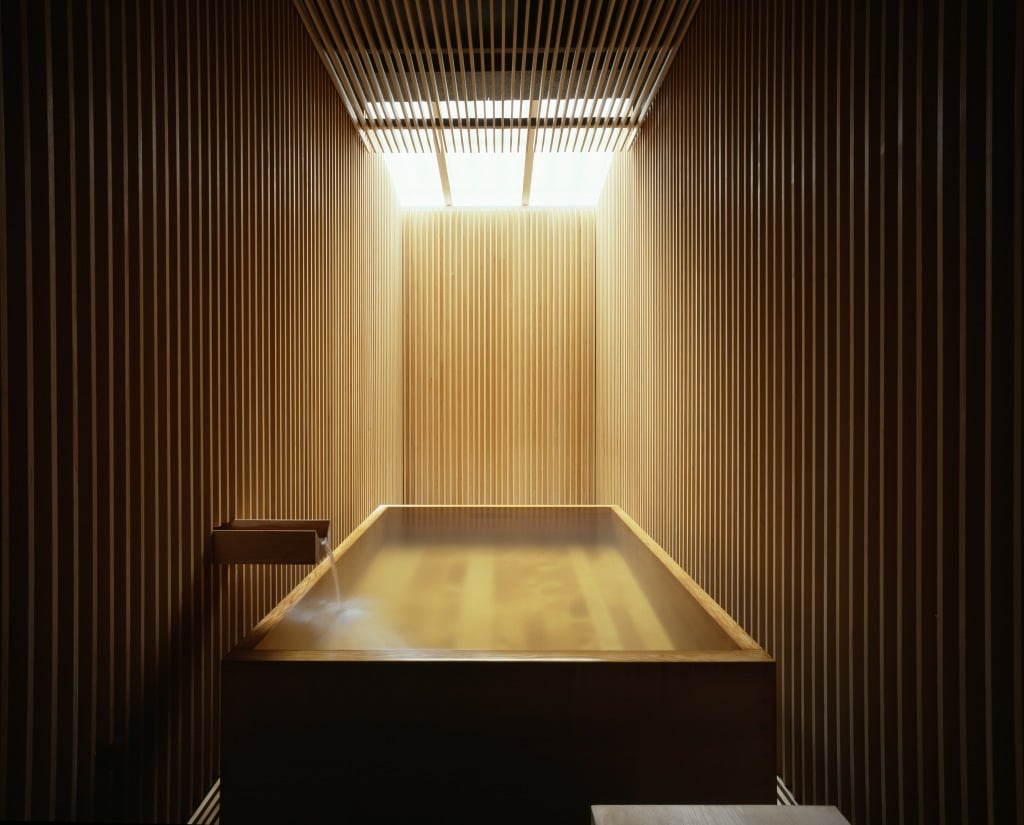 Injecting a hint of modernity into the establishment without sacrificing its ancient spirit: this was the main ambition held by the architectural firm Kengo Kuma and Associates when they embarked on renovating the Ginzan Onsen Fujiya in 2008.

Located in the heart of Yamagata Prefecture, in the small town of Ginzan, known for its hot springs that were discovered in the Kan’ei period (1624-1643), this traditional ryokan (hotel) with onsen is one of fourteen inns that opened their doors close to the river that runs through the commune, at the end of the 18th century.

The height of artisanal refinement

The star architect thus designed a façade that maintains its original composition, made from posts and wooden beams, and added a more modern touch with a sliding glass entrance door. This glass wall was developed in close collaboration with a Japanese artisan who specialises in restoring the stained-glass windows at Chartres Cathedral, and a French glass-blower who made this mouth-blown glass with gentle green reflections, which gives the hotel atrium an almost aquatic ambiance.

This atrium is another addition from Kengo Kuma. Designed to act as a link between the hotel and the outside, this space is surrounded by a bamboo screen, which allows light to filter through at the brightest hours of the day, maintaining a soft, shady atmosphere.

Lastly, the architect also worked with one of his key components, wood, particularly in order to create partitions with multiple wooden slats to demarcate the rooms dedicated to bathing. Installed in such a way as to let light from outside pass through but without offering a bird’s-eye view over those relaxing in the onsen, these walls conform to the strategy adopted by Kengo Kuma for renovating Ginzan Onsen Fujiya: prioritising use of natural (and local, the wood being the same as that used when the hotel was built) materials rather than others, like concrete, that were used when the hotel was previously renovated in 1913.

More information about Ginzan Onsen Fujiya can be found on the hotel website. 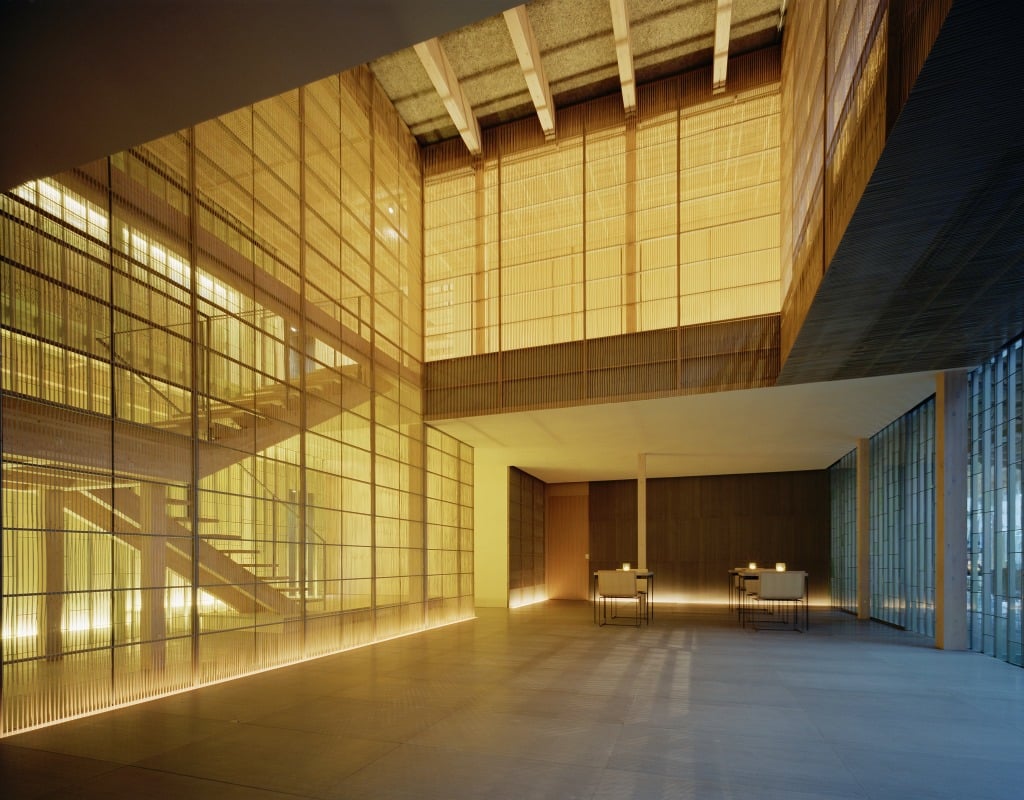 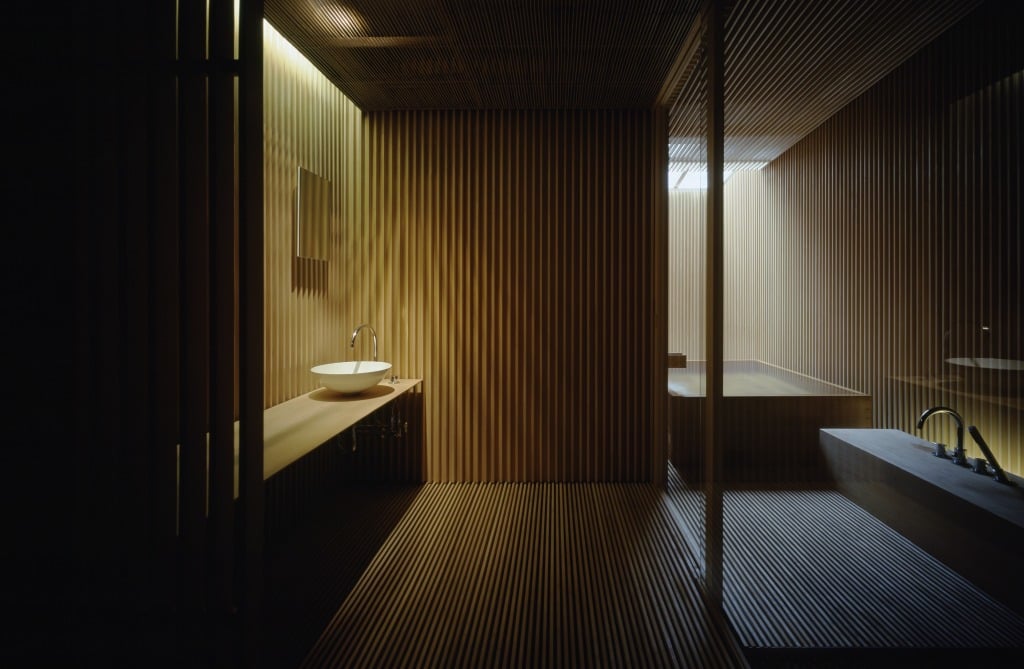 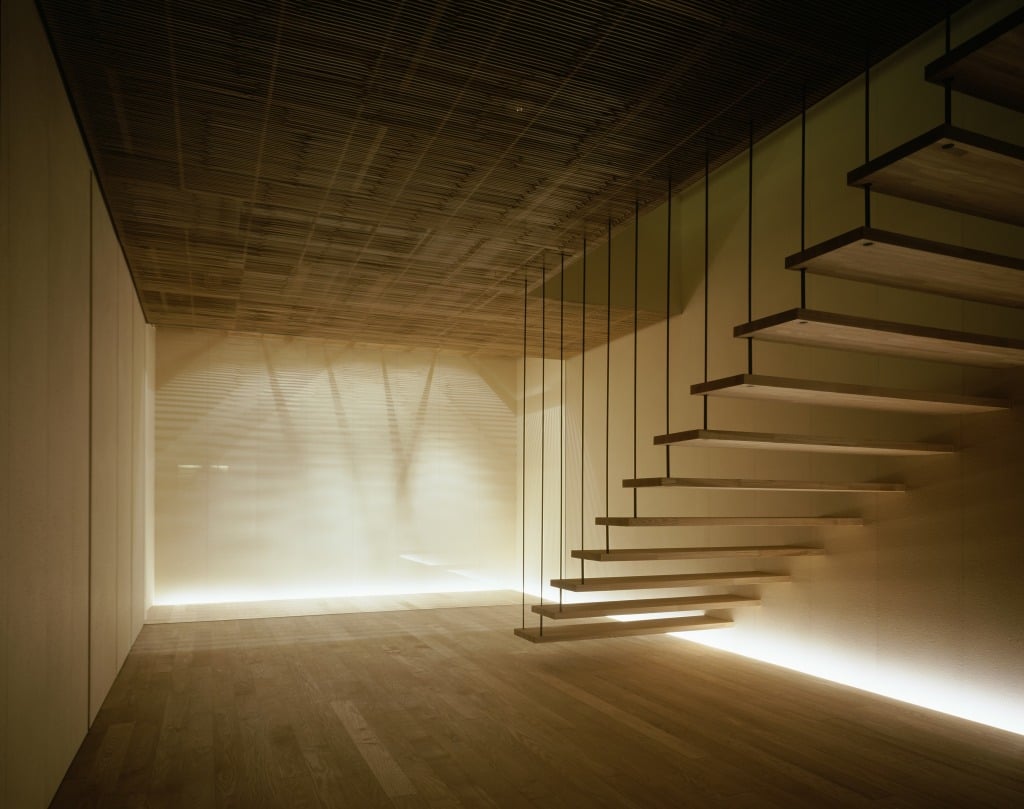 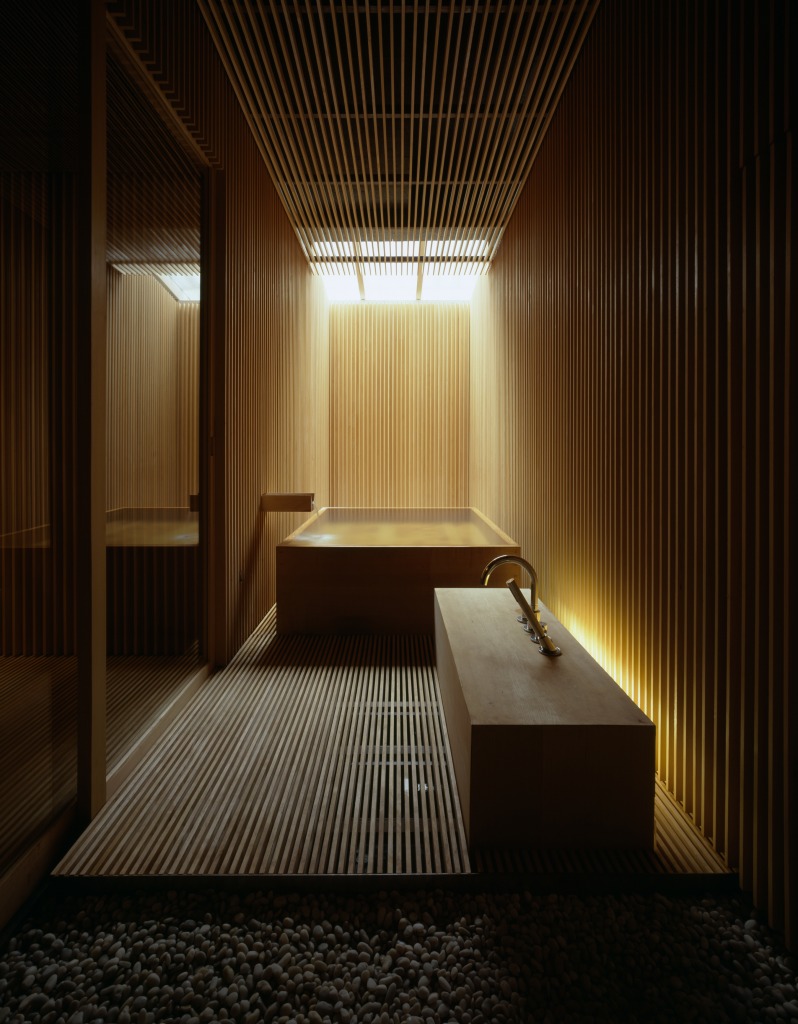 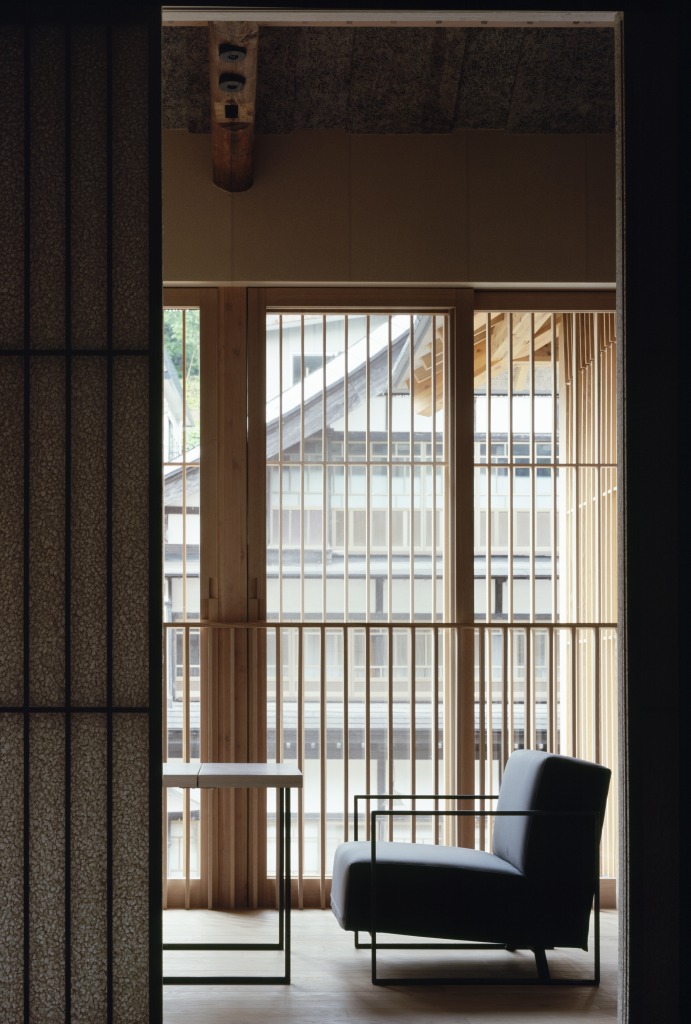 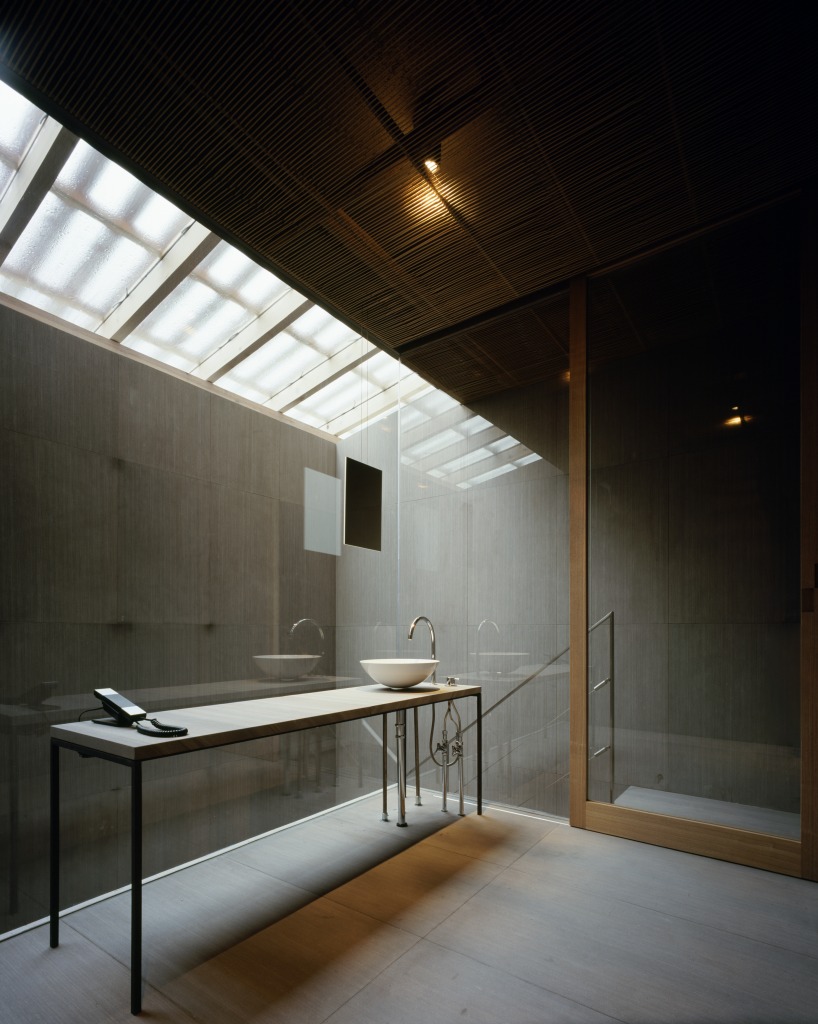 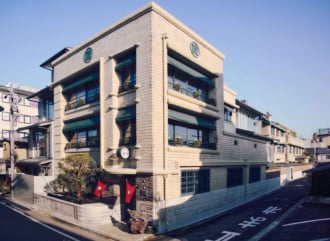 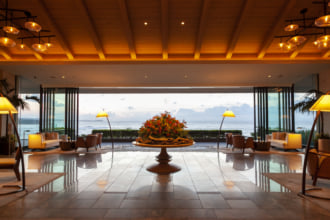 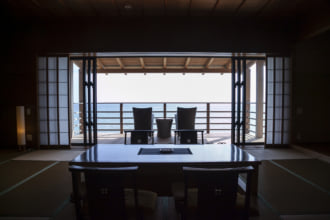