Nearly one-half of bespoke shoemaker Yohei Fukuda’s clients fly from around the world to visit his workshop. 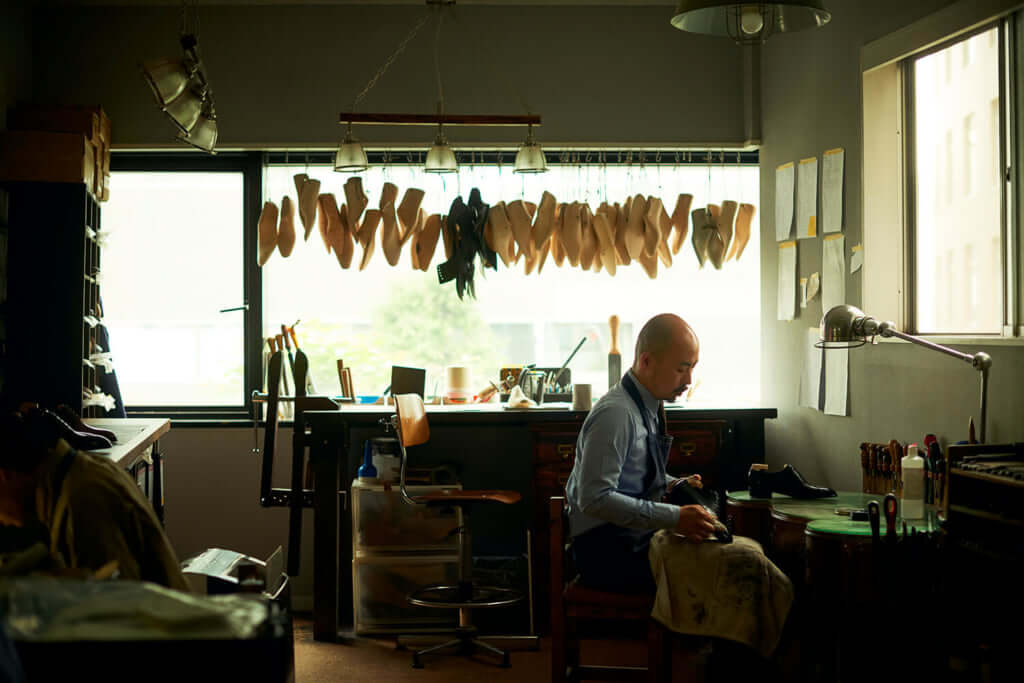 Fukuda is the only bespoke shoemaker in Tokyo to have set up an independent shoemaking workshop. In his small shop, wooden shoe lasts patiently line the wall seeming to watch over the cobbler as he works.

In the days before modern global fashion came to Japan, the Japanese typically wore kimonos with long, fullcut sleeves and sandal-like open-toed footwear. It wasn’t until the political and cultural revolution of the late nineteenth century when Japan was exposed to modern Western influences, that the Japanese finally adopted the custom of wearing shoes.

Everywhere in Japan, evidence for a love of Western fashion flourishes, with a particular fondness for the aristocratic flair of classic English sartorial style. This unparalleled fascination with fashion compliments a profound respect for craft. 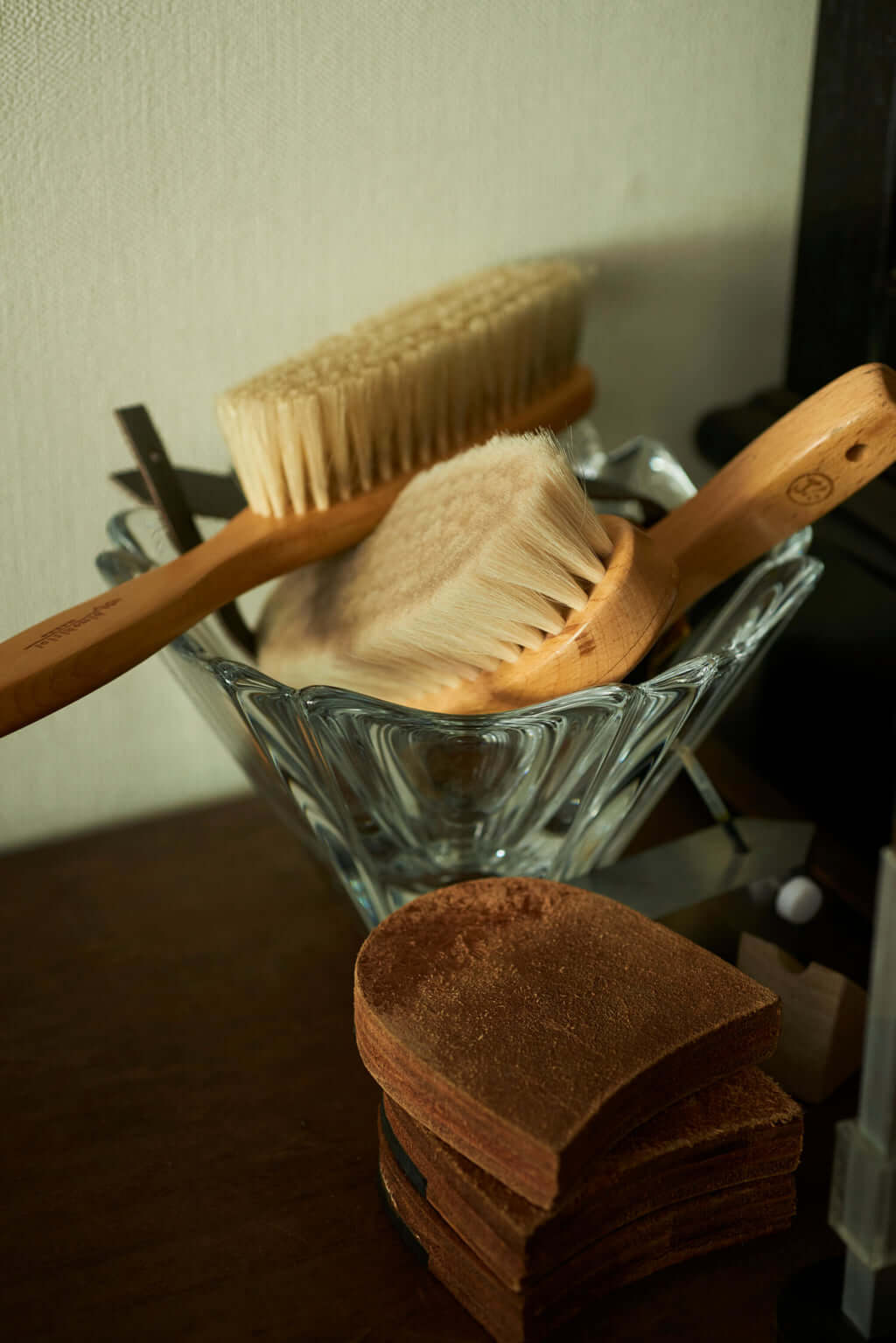 From this milieu, the master craftsman Yohei Fukuda rose to win worldwide fame in his field. He selected ultra-chic Kita-Aoyama, where the Tokyo elite go in search of the peak of fashion, as the home for his eponymous workshop. His sophisticated sensibility follows a classic English aesthetic. And rather than following trends, he prefers creating handcrafted quality products renown for bringing a lifetime of joy, comfort, and luxury to his clients.

Acquiring a pair of this footwear is far from easy and begins with the dramatic step of having a fitting at his workshop in person. One wonders what compels clients to flock to him despite the fact that a flight from Europe can take over twelve hours, and even a lower-end pair of Fukuda’s shoes can cost upwards of 240,000 JPY, with full bespoke orders costing much more.

The answer probably lies in the single word that Mr. Fukuda’s clients are most likely to use in describing his peerless shoes: Perfection.

Mr Fukuda explains why he thinks his clients sing his praises so readily. ‘Around half of our clients come from abroad. We get a lot of European clients at the studio, especially from France, Britain, and Sweden. When you ask them why they come all this way, they tell you that they value the meticulous Japanese craftsmanship of the shoes. When they first see a finished pair of our shoes, they are often moved to comment on how beautiful they are and how perfectly they fit. Shoes from their native countries are likely to be slightly less meticulously finished. At Yohei Fukuda we are known for our unique Japanese attention to detail and painstaking craftsmanship’. 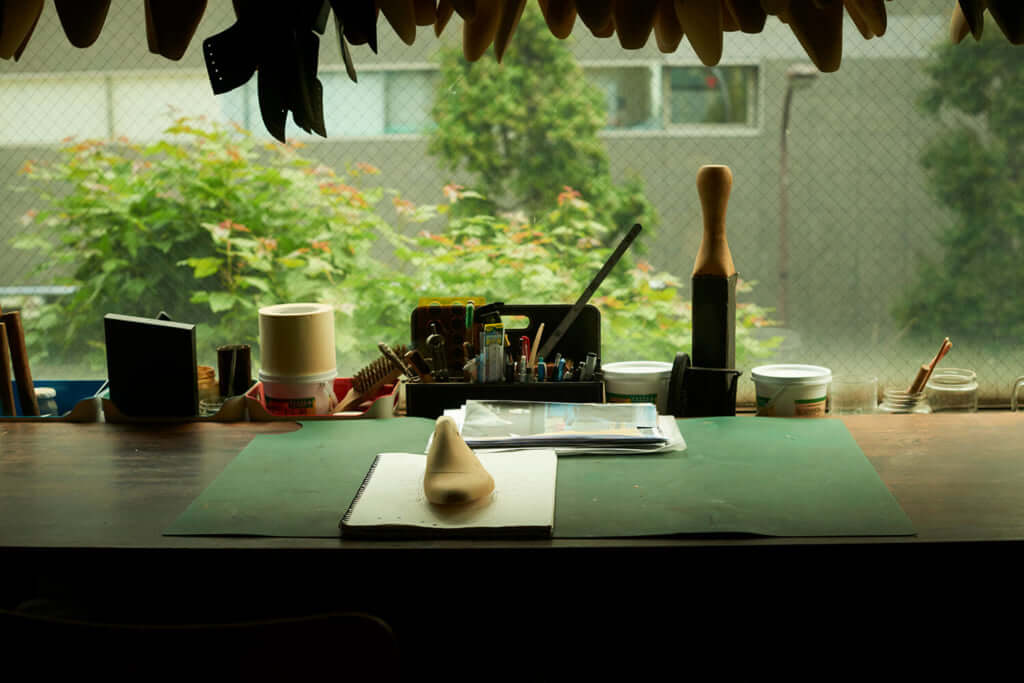 One might naturally be curious about Fukuda’s journey to mastery in this uncommon craft.

Born and raised in Toyama, far from the fashion center of Tokyo, he was genuinely interested in fashion from an early age and enjoyed visiting stylish stores while he was still quite young. In one of those shops, he discovered such distinguished brands as Barbour, John Smedley, Mackintosh, and Whitehouse Cox. This was probably where he developed his preference for apparel with a classical, timeless appeal.

At nineteen his life changed when he chanced upon a pair of shoes from the turn of the twentieth century in a local Museum in North Hampton, England, an area with a rich history of shoe manufacturing. Entranced by the simple elegance of the shoes, he had the sudden epiphany that cobbling would be his life’s work, and he soon enrolled in shoemaking school, where he worked with such prestigious brands as John Lobb Paris, Edward Green, and Church’s, among others. After graduating, he went on to work independently for George Cleverley, Edward Green, and Gaziano Girling, where he accepted an appointment to insole fitting and shoe repair.

We wondered if he felt that being Japanese had, in any way, hindered his progress in school or in his field.

‘I didn’t feel particularly hindered, no. There weren’t so many British people at the shoemaking school, but there were a lot of Japanese, Spanish, Swiss, and Chinese. Shoes are too mundane to be interesting for most young British people, so there aren’t so many of them who have the passion that it takes to actually blossom into master shoemakers. There seems to be a sharp divide between generations of craftsmen. Most of them are either younger or older. There aren’t many middle-aged shoemakers’. 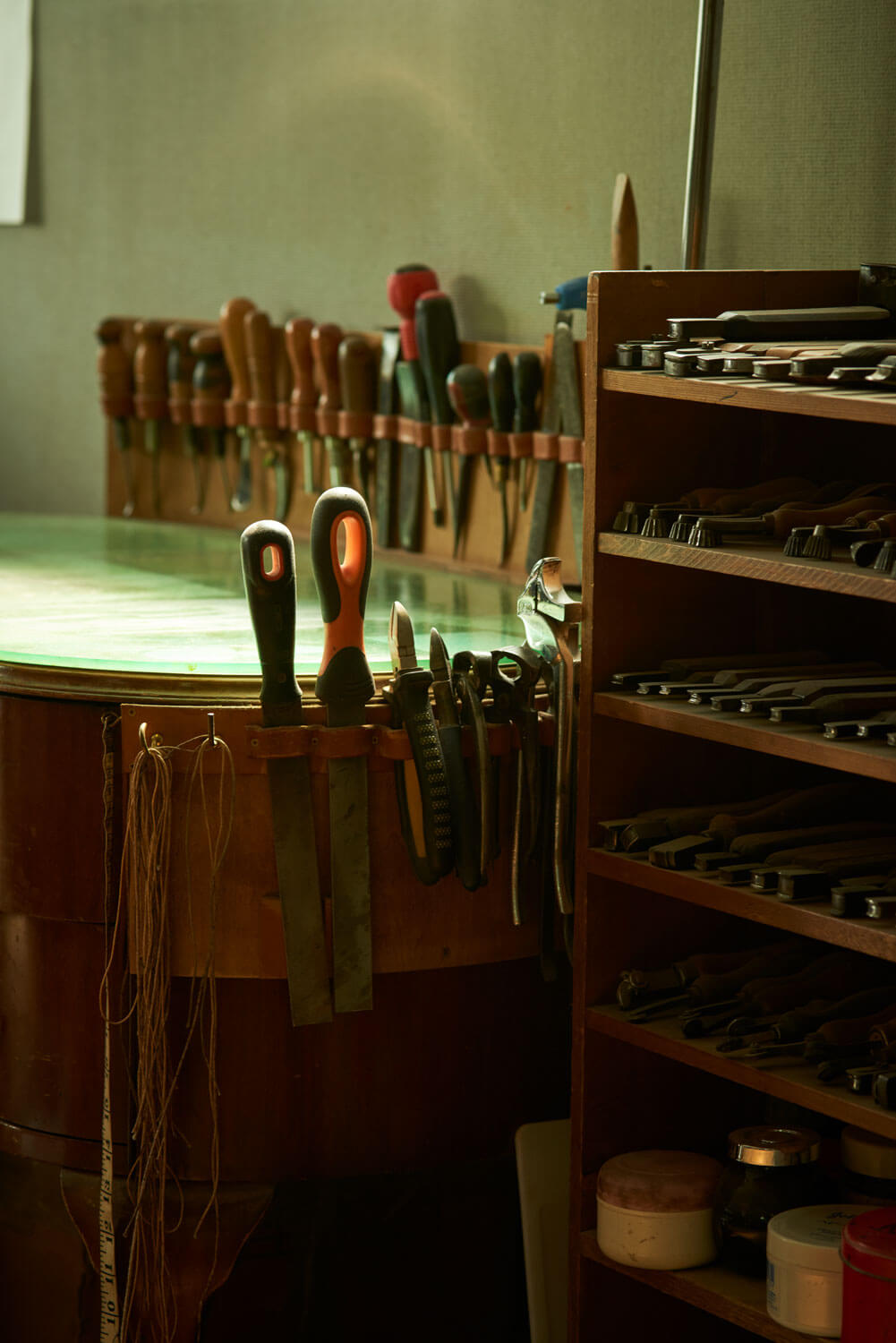 To hone his skills, broaden his vision, and refine his aesthetic sense, Fukuda pored over classical tomes on cobbling, volumes that most people would not appreciate. Then, in 2008 he returned to his native land to begin building his own brand. He established his workshop in Tokyo and set his sights on success.

‘We Japanese want to spread the word of our quality craftsmanship far and wide. Now, thanks to the rise of the internet and social media, we have the ability to share our stories with the whole world. Even small Asian brands can stay in business this way. There are already over thirty companies making bespoke shoes in Tokyo, making Tokyo the number one city in the world for custom fit footwear. There are ten workshops here that make wooden lasts, compared with only one in England. Many shops allow the client to choose the leather and fittings for their shoes. There are plenty of benefits to working in Tokyo, and virtually no drawbacks’.

Japanese shoemakers, in their humility, tend to undervalue the level of their craft, fallaciously comparing the relatively short history of shoemaking in Japan with the much longer European tradition. In fact, for over 150 years Japan has been carrying the torch of a nearly lost tradition.

Mr Fukuda understands that the craft of making luxury footwear is about more than just durability and comfort. Exceptional shoes have grace, are beautifully stitched, and convey luxury.

Yohei Fukuda assures every client that each shoe is an immaculate masterpiece that elevates all of these elements to a new level of harmony. 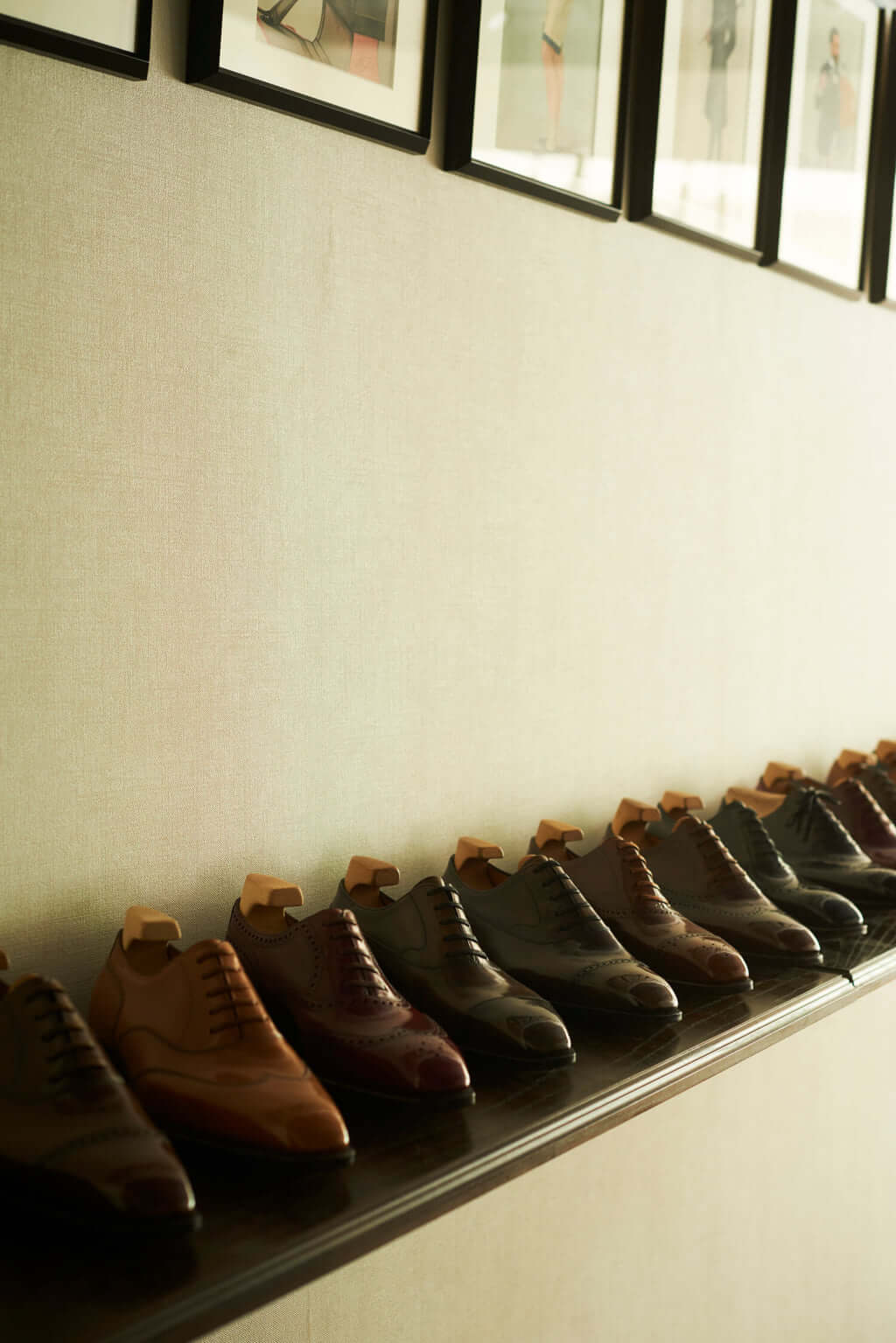 He has also started custom making shoes in the hand-sewn, welted tradition of shoemaking, similar to the bespoke hand stitched method. Reservations are required for visiting the shop.