Among the many traditional workshops in Tokyo’s historical Asakusa district, one will find Tsuge Seisakusho, crafters of fine pipes since 1936. Discovering this charming shop, and the masterpieces they create may well cause one to wonder what lies at the heart of this almost anachronistic artisanry. 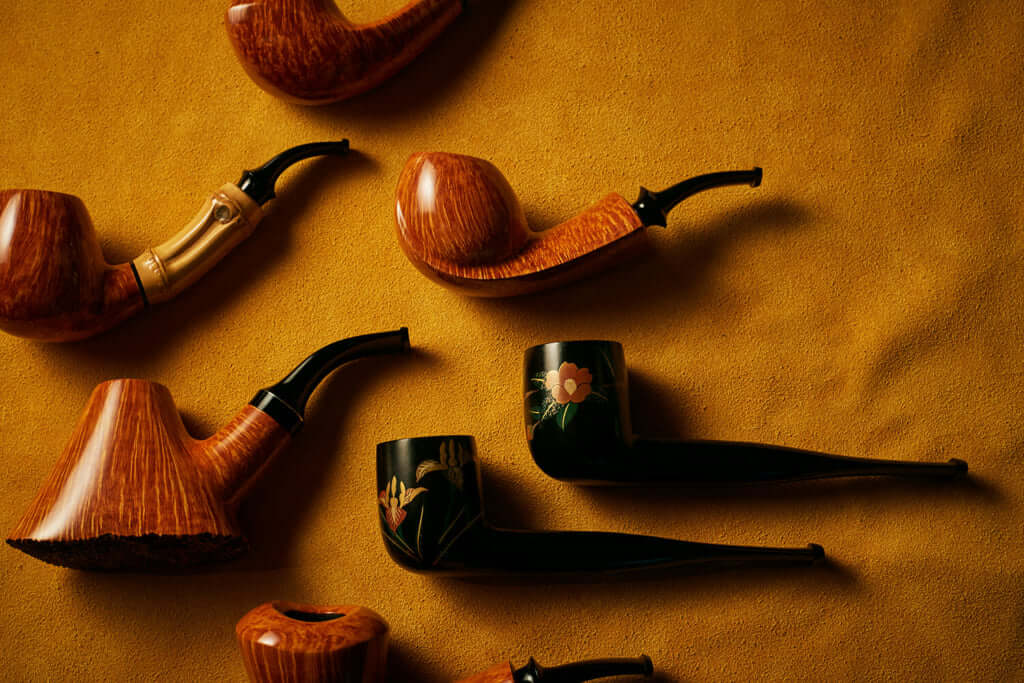 The craftsmen at Tsuge Seisakusho include something of the spirit of Japanese harmony in every pipe they produce.

These days many have a strong aversion to tobacco. Not only does the noxious smoke surrounding the smoker assault one’s senses, but there is also the infuriating lack of consideration shown by many smokers to the people around them. Their frequent breaks from work can be frustrating for colleagues who don’t smoke.

So pervasive is the perception that cigarettes are synonymous with tobacco that it’s easy not to realise that tobacco and cigarettes are not the same things at all.

Cigarettes, incorporating finely chopped tobacco leaves, typically wrapped in paper, have been commonplace for centuries. In the mid-sixteenth century the custom of smoking, along with its attendant rituals and accouterments migrated from its birthplace in the Americas across the Atlantic ocean to Europe where it soon took root and flourished.

When the custom finally found its way into Japan, along with the unstoppable wave of western culture ushered in by the Meiji Restoration, pipes were the very first smoking paraphernalia to make their way into the hands of the Japanese elite, and they quickly became emblematic of status and fashion.

From generation to generation artisans have continued contributing to the evolution of the pipe through innovations in design, experimenting with novel materials and their native sensibilities. Occasionally, the value of one of these handcrafted appurtenances can even exceed the value of a fine work of art.

Over time, however, the craft of pipe making has fallen out of fashion, from a peak of over forty-eight manufacturers in Tokyo alone to the sparse handful still carrying on the tradition today. But even in this precarious environment, there is still one workshop in Asakusa, Tokyo that is putting everything they have into perpetuating this fine tradition.

Hiroshi Mitsui from Tsuge Seisakusho joins us for an interview. ‘Pardon me for just a moment’, he says, standing as he lights and takes a leisurely draw on his impressive pipe. A delicate, fragrant puff of smoke with overtones of honey and vanilla soon graces the air of the room with a rich, sweet aroma. 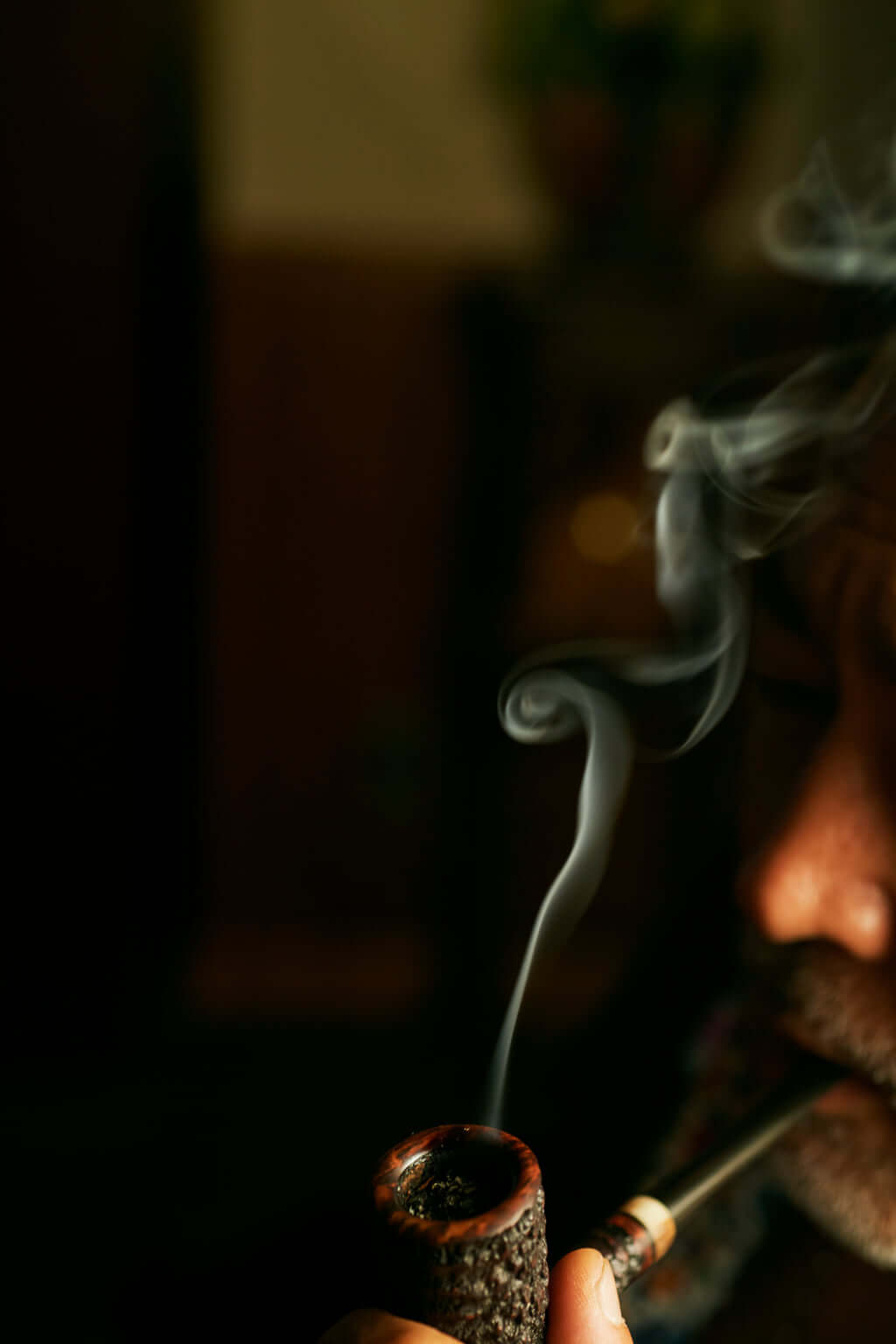 Unlike the ephemeral waft of smoke, however, Tsuge Seisakusho has been a solid monument of a craft house through generations of craftsmen. In fact, one may say without exaggeration that the history of Tsuge Seisakusho is the very history of pipes in Japan. Their chief artisan stood eloquently calm and composed before us, thoughtfully nursing his pipe.

Since their founding in 1936, Tsuge Seisakusho has been committed to two things above all else: A profound aesthetic of style that shines in every pipe they make, and their identity as a part of the rich tradition of Asakusa born and bred fine craft workshops. The company takes great pride in their Asakusa location.

In fact, Mr Mitsui assures us that it’s unthinkable that they should carve these elegant works of art anywhere else, prompting us to ask why it’s so important that they are made in Asakusa, specifically. The answer intertwines with the history of the area itself.

‘Asakusa has been a commercial centre for handicrafts dating all the way back to the Edo Era. Asakusa was the place to find expertly dyed fabrics, traditionally crafted lanterns, and quality tanned leather, for example. Here craft runs in our blood. Many of these traditions have been passed down in an unbroken lineage to the craftsmen who still actively ply their trades. What we do may be different, but we are still Asakusa craftsmen. We keep this pride alive in every pipe that we create’.

Asakusa is undeniably one of the premier places on earth where one may procure handcrafted goods of the highest quality craftsmanship. One can easily understand how this area’s commitment to craft provides a constant source of inspiration for the artisans of Tsuge Seisakusho. 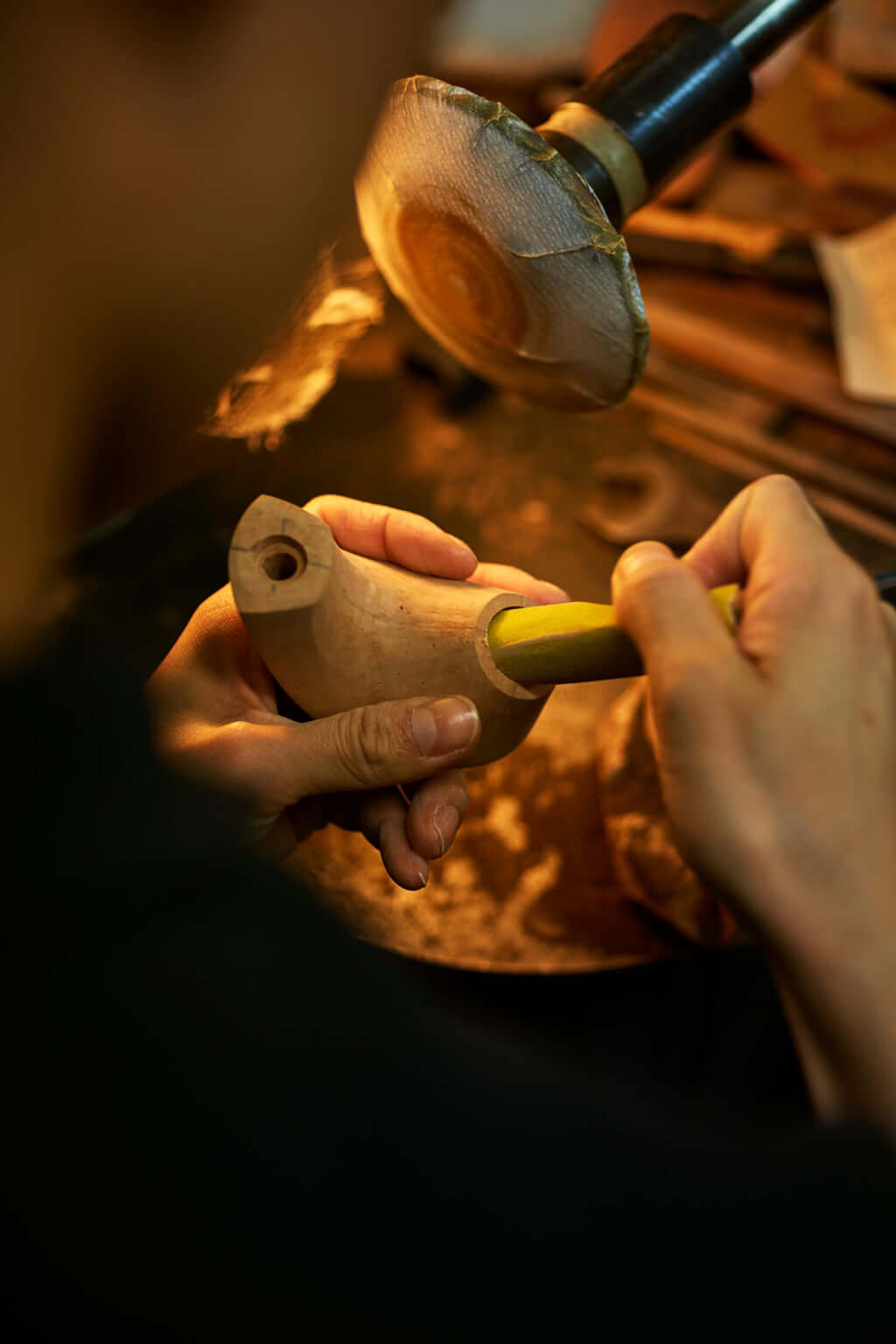 A view of the production process. Sandpaper is used to shape the inside of the bowl. 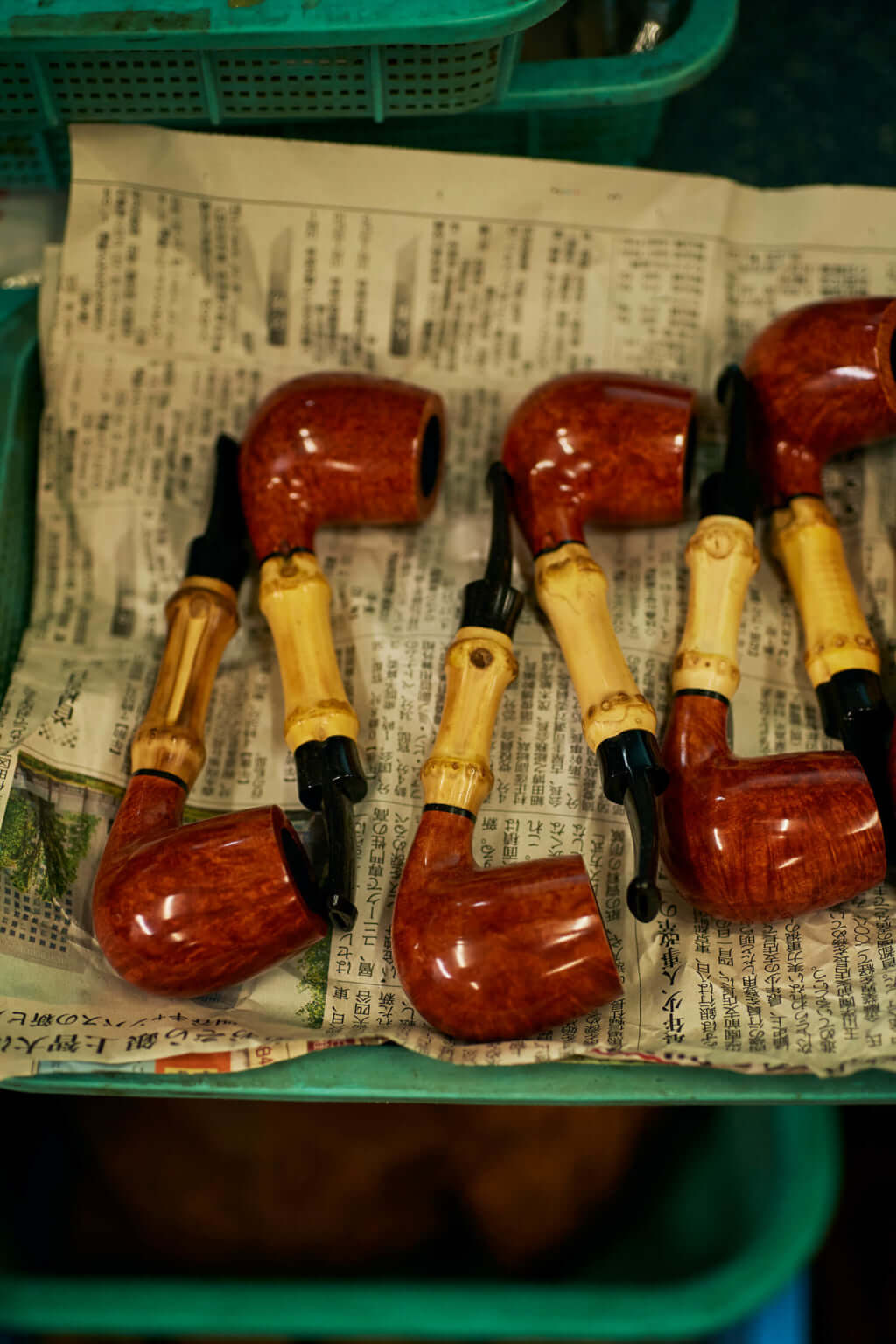 The dying process is completed. Pipes waiting to dry.

But no matter how deep this local pride of craft goes, there are no guarantees that a business will thrive. One would hardly consider Asakusa, historical as it is, the ideal place for a pipe maker to thrive.

After all, one must recognise that not only are the vast majority of the most noted craftsmen in the field based in Western countries, but also the essential materials for pipe making are, for the most part, imported from overseas. Aficionados recognise briar root as the best raw material for wooden pipes, but it is native to the Mediterranean and does not grow naturally anywhere in Japan.

Even though it may not exactly be a paradise for pipe makers, one senses a continuity of pride in carrying on this illustrious tradition here, in this most improbable of places.

‘We credit this to the skills that we develop as part of our aesthetic. We think of it as an aesthetic of endurance’, Mr Mitsui intimates to us. ‘We have to consider the fullest extent to which we can stay competitive within our limited means. This way of thinking informs every aspect of our pipe making’.

To one’s non-Japanese ears the concept of endurance carries a negative nuance, but it is a deeply engrained part of the Japanese aesthetic sense in general. One may recognise some overlap between this Japanese concept and Western stoicism.

‘When you find yourself in a challenging situation you should always strive to do your best without making a big deal about it. If you can do that, you appear dignified. Dignified is a label that others must bestow upon you. If one calls themselves dignified they come across as vulgar—exactly the opposite’.

Merely looking at one of Tsuge Seisakusho’s superbly crafted pipes is enough to awaken within one a sense of how they embody the sophisticated values that Mr. Mitsui espouses.

Their flagship line, the Ikebana, in particular, epitomises these principles. These masterpieces incorporate only the highest quality briar root, sculpted and polished until the grain perfectly accentuates the sensuous, organic contours of the pipe.

This approach stands in keen contrast to the sharp angles and artificial shapes favored by many modern Western master craftsmen. The humble Japanese aesthetic of these pipes imbues them with a subtle, harmonious beauty, quietly highlighting Tsuge Seisakusho’s commitment to an artful sense of dignity that instantly lends the user an air of worldly sophistication.

As smoking becomes regarded as antisocial, pipe smokers resist with style, and the pipe makers at Tsuge Seisakusho continue crafting artful pipes that embody a beauty that only could have come from Asakusa.

Today, perhaps even right now, somewhere in the world an enticing puff of fragrant smoke is rising like a beacon of pleasure from a Tsuge Pipe. 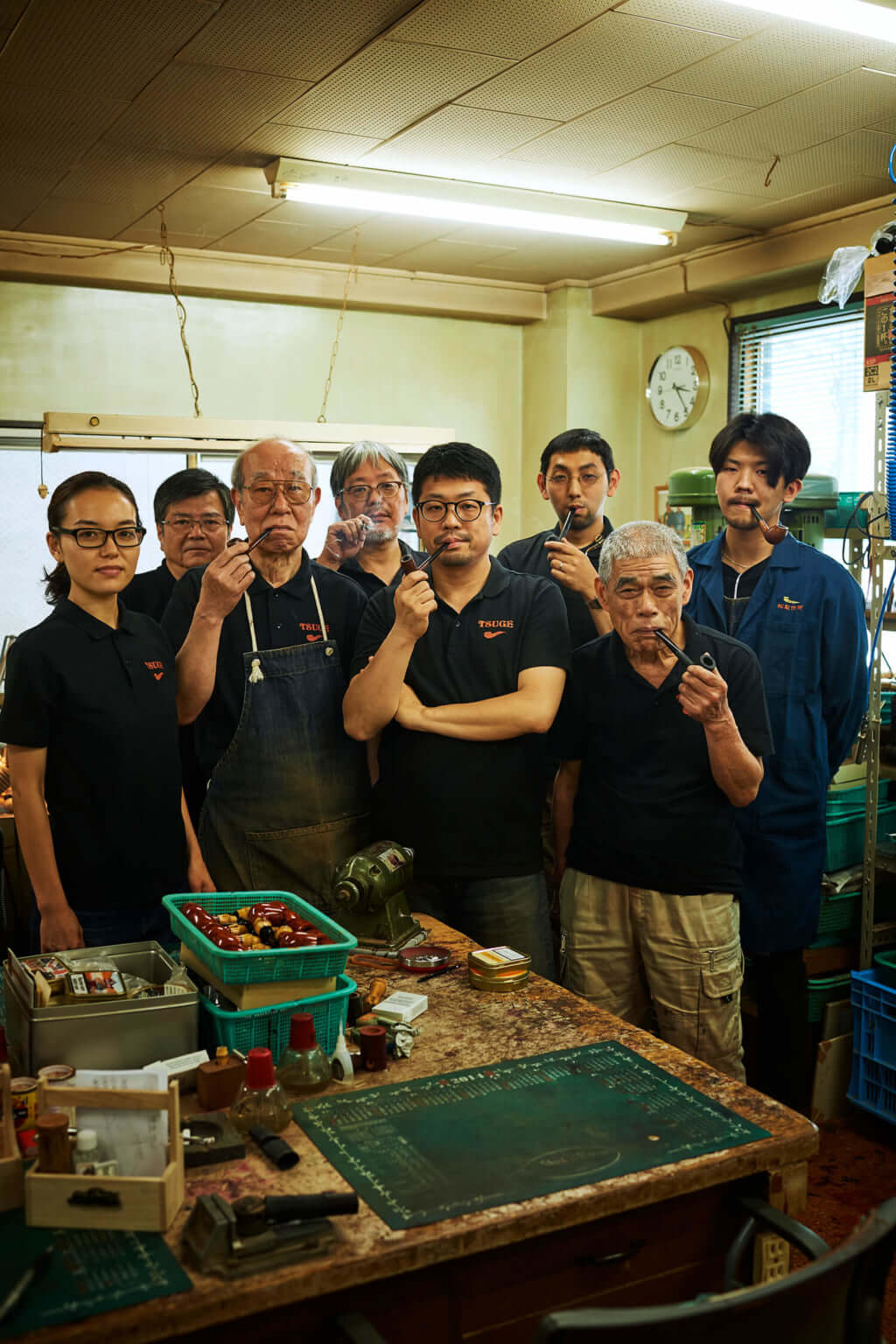 At one time there were over one-hundred craftsmen at Tsuge Seisakusho, but now there are only eight. Jocular competition between rival craftsman bridges the generations.