The architect custom-designed his home and furniture to promote connection and coming together with friends and family.

Prior to building his home, Naoki Terada designed his ideal house. The most important thing for him was for his friends and family to be able to gather there, and he decided to maximise the spaces for them to connect and come together. As a result, the living room occupies an integral position to the point of becoming the centrepiece with its six-metre-high cathedral ceiling.

Splashes of colour in a white interior

So as not to steal the spotlight from the building’s daring structure, the architect opted for a limited amount of furniture, some of which was custom made. The modular pink and orange sofa, which he designed himself, adds a splash of colour to the white, light-filled space. The same goes for the pink vertical chair bed which cleverly allows the user to lie down or lean back as the mood takes them.

Naoki Terada is a product designer and architect. After finishing his studies in London, he opened his agency Terada Design Architects. An avid collector and builder of models (boats, planes) in his spare time, he launched a model design firm aimed at architects, Terada Mokei, in 2011. The project became so popular that he made it accessible to the general public.

More information about Naoki Terada’s work can be found on his website. 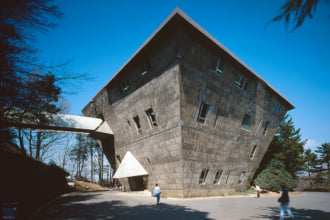 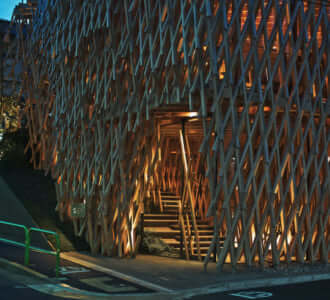