Tonkatsu, a Staple Dish by Tadashi Ono and Harris Salat

In this recipe, the Japanese chef reveals the secret to making the crispiest fried, breaded pork imaginable. 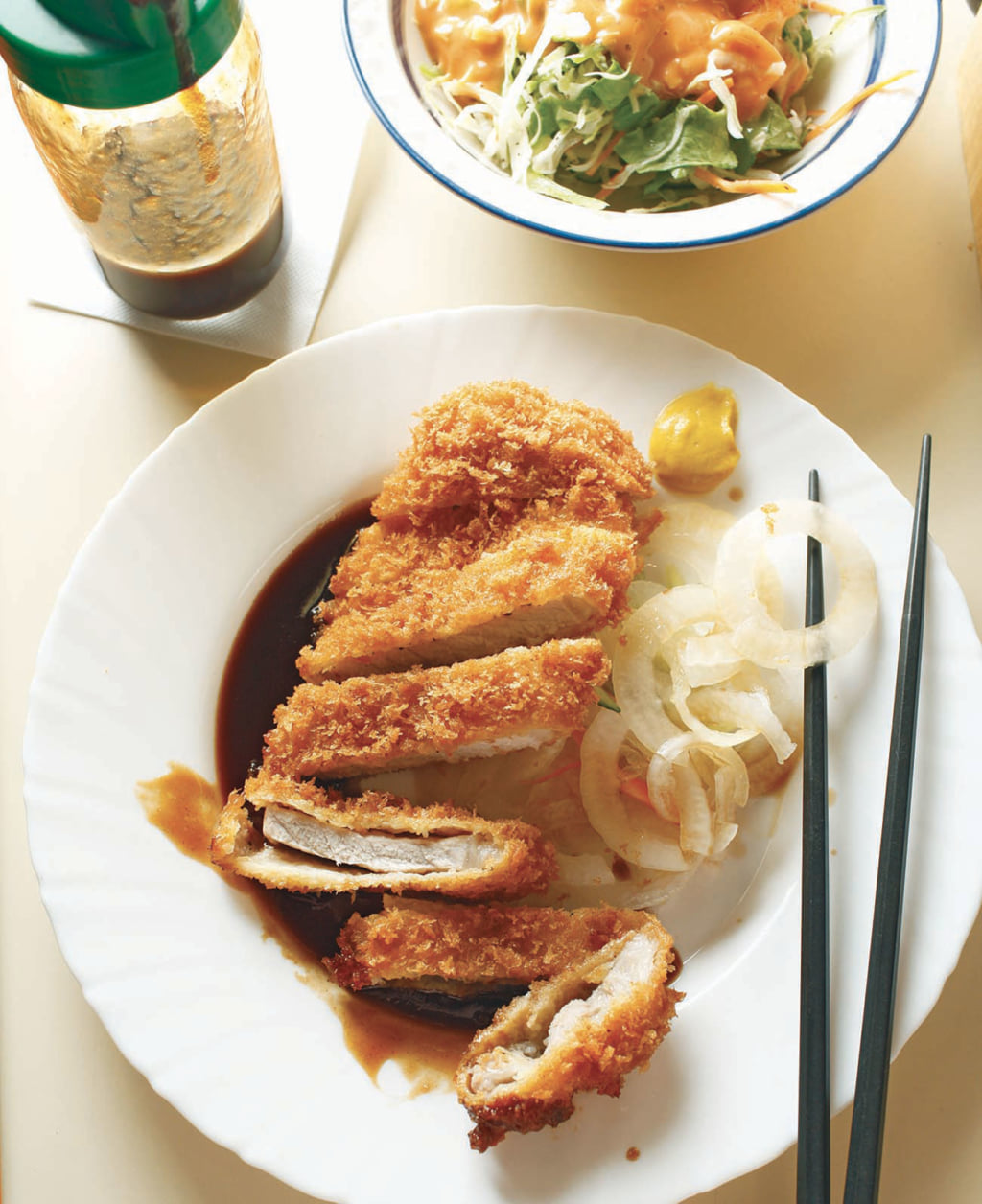 The duo share their recipe for tonkatsu, a Japanese dish comprised of fried, breaded pork and usually served in small cafeterias in Japan, accompanied by grated cabbage, rice, and miso soup. ‘In this recipe, Tadashi shares a family secret: coat the pork with flour and egg twice, to make the tonkatsu even crunchier’, Harris Salat reveals.

In this book containing over 100 recipes, the culinary journalist and his counterpart, chef Tadashi Ono, showcase a series of comforting Japanese dishes. Whether ramen, tempura curry, or gyoza, the authors share their best recipes in Japanese Soul Cooking, complemented by new ingredients and techniques, along with highly detailed instructions and step-by-step photos to make their recipes foolproof.

Slice the cabbage as thinly as possible (you can use a mandoline or other slicer). Follow the instructions to make the cabbage ultra-crunchy (below) and set aside.

To prepare the pork fillets, lay them flat on a cutting board. Tap the fillets with the back edge of a kitchen knife (the edge opposite the blade) to dig notches into the meat. Turn the knife so the flat side is facing the fillets. Pound the meat with the knife’s flat side about six to eight times on each side of the pork to flatten the meat to about 1.25 cm thick.

Cut 1.25-cm notches into the white fat of the fillets, which will prevent the fillet from curling when frying (fat shrinks faster than the meat when deep-frying).

Season the fillets on both sides with salt and pepper. Transfer the prepared pork fillets to a plate. Beat the eggs in a bowl and set aside.

Prepare four plates. Pour the flour onto the first plate, and the beaten egg onto the second plate. Pour the panko onto the third. Leave the fourth plate empty for now (this will hold the breaded tonkatsu).

Place a cast-iron skillet on a burner. Fill the skillet with vegetable oil to a height of at least 2.5 cm. Attach a deep-fry (or ‘candy’) thermometer to the side of the skillet.

On a work surface near the skillet, set up a tray lined with newspaper or paper towels to drain the cooked tonkatsu. Turn on the heat to high. Heat the oil to 170°C.

Cook the tonkatsu for about four minutes, turning once, until the fillets turn golden brown. When they’re ready, transfer the fillets to the paper-lined plate to drain. If possible, stand the fillets on their edges so they drain better (you can use a metal rack to accomplish this, if you have one).

Transfer the tonkatsu to a cutting board and slice into strips. For each serving, place the pork on a plate, along with a heap of sliced cabbage and a dab of mustard. Serve topped with about 2 tablespoons of tonkatsu sauce or serve the sauce on the side, as you prefer. Serve piping hot with steamed white rice on the side.

Turning an ordinary head of cabbage into crunchy goodness is a snap. The trick is soaking it in ice-cold water to firm it up. Here’s how we do it: cut a head of cabbage in half lengthwise (head to stem) and core it. Now slice the cabbage as thinly as possible with a sharp knife or mandoline. Pour cold water into a large bowl and dump a tray of ice cubes into it. Add the cabbage and let it soak in the ice water for about ten minutes. Strain and serve (remove any errant ice cubes from the cabbage). The shredded cabbage will now be refreshed, firm, and beautifully crunchy, the way it’s supposed to be.

Harris Salat and Tadashi Ono have written other cookbooks together such as Japanese Hot Pots and The Japanese Grill. 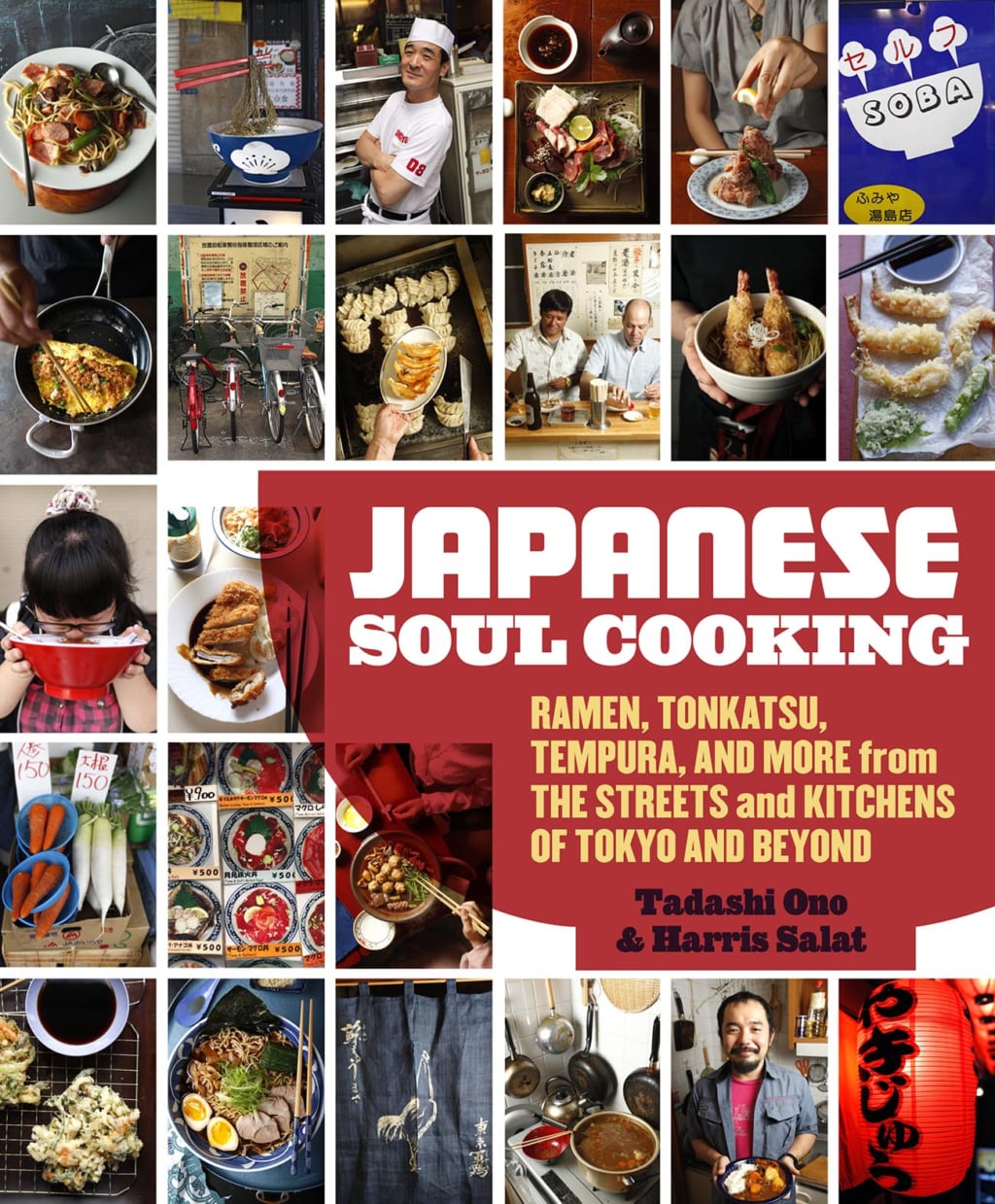