An optical and artistic emulsion, the series 'PixCell' questions our environment and lifestyle through transparent spheres. 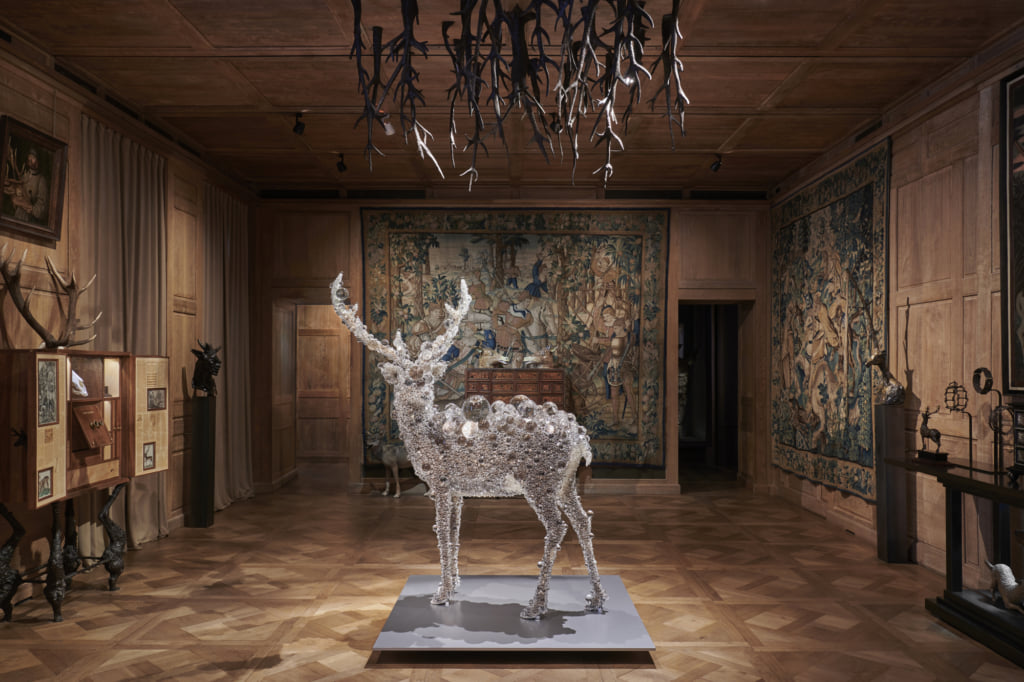 He plays with words and our perceptions in equal measure. Kohei Nawa, born in Osaka and now a professor at Kyoto University of the Arts, makes his sculptures emerge through the surface of objects sourced online, which he then covers in a multitude of clear bubbles. PixCell, a combination of pixels and cells, transposes the image found online into reality. Due to the magnifying effect of his glass spheres, the representation of his object becomes distorted. The digital age, consumer, and information society… This examination of a changing world and its consequences are scrutinised through these spheres, through which Kohei Nawa questions the future of humankind. Pen spoke to the artist.

How did this series come about? It encompasses the notions of pixels, cells, and selling. Is making purchases online to create artwork a way of questioning our current consumption patterns?

In the PixCell series of sculptures, transparent spheres (cells) are used to cover the surface of an object, transforming it into a PixCell (pixels + cells). The object is acquired through the Internet, and then given a skin of a large, indeterminate number of cells, resembling an image on a computer monitor. When the object is completely covered with spheres (cells) of various sizes, dividing its skin into individual cells, it is ready to be ‘viewed’ through lenses that enlarge and distort it.

This series, whose origin was influenced by globalism and the growing significance of data, produces a visual and tactile experience that queries the reality of the skin of the object, while reflecting the relationship between the digital camera lens and the object that is digitised by it. The term ‘PixCell’ was coined from a combination of ‘pixel’ and ‘cell.’ ‘Sell’ is not part of the concept at all. When I first got my own Internet connection as a graduate student, I had the idea of collecting sculpture motifs by searching the Internet using a number of conceptual terms as the search keywords. Looking at the many images suggested by the search engine, I tried to obtain those that I found particularly interesting or that produced some sort of reaction in me. Those occasions were the starting points for new works. In some cases, the encounter with a new motif came not from purchasing, but from someone giving it to me.

Why did you want to create this mise en abyme with an object purchased online that would become a pixel again in real life?

When computers seeped into our lives, bringing a major transformation to society, I could physically sense the swelling wave of information, advanced information. At the same time, I felt that to some extent I was just a bystander in the process. That led me to think seriously about the question of why people would convert something into information and want to possess it. To turn that question into physical form, I created the sculpture format that I call PixCell. The fabrication process involved an irrational procedure (directly covering an object with spherical lenses) that would never become widespread on computer platforms. This optical format is not simply pixels returning to life as PixCell works. Rather, it resembles the relationship between an object observed by a telescope or microscope, or the subject photographed by a camera, and the photograph or image that results.

There is therefore a dichotomy between ‘pixels’ and ‘cells’, the digital and the real, the living and the dead, and an association between these dualities because pixels become cells. Is this a metamorphosis (particularly in the case of the deer)?

Humans use sight and touch to sense the external skins of things, and that is the large part of how they are aware of the world surrounding them. In a society where technology has progressed to the extent that things can be converted into data in an advanced form, I create works that go beyond surface-layer perception to directly interrogate or address people’s perceptions or sensibilities. I don’t think in terms of binary distinctions such as whether something is digital or real, living or dead. What interests me is the parallel relationship between the object used as the motif and the object after it that has been transformed into a PixCell work. I am always thinking about how a person viewing the work perceives and becomes aware of image and materiality, and of the icon and the virtual image, and I also think about sight and the paralysis of touch. At the foundation of my works is life and the environment that envelops it. The PixCell, Biomatrix, and Prism series are questioning the future of humanity, civilisation, and nature in space. So is Throne. Another work with a similar theme that I am involved in is the set design for choreographer Damien Jalet’s performance work Planet [wanderer], which will premiere in September 2021 at the Théâtre National de Chaillot.

Where did this desire to cover things with spheres come from? Is it a way of preserving, protecting things? Is it also a desire to make a banal object precious by creating a form of sublimation due to the effect of light?

Rather than a desire to shut something in, my sense is that this is a process of preserving something by making it untouchable. When I was first creating works in this series, I was worried that the information-driven shift of interpersonal communications to formats that overemphasise the visual would paralyse our sense of touch. In order not to be swallowed up by a world in which people and objects are encoded and handled as data, and in which social trends are controlled by data, I chose a method that produces internal experiences by directly linking to the physical body and perceptions through an approach predicated on materiality: sculpture.

PixCell‘s emergence as a sculptural methodology derived from an awareness of the issues arising from the trends at that time, and from a desire to interrupt the history of sculpture and the history of photographic and image media. With this methodology, an object covered in lenses is transformed into a sort of virtual image. Regardless of whether the motif is a mounted animal or an everyday item, it is treated in a uniform manner by covering all surfaces with crystal glass spheres of varying sizes. If you touched the result with eyes closed, you would be completely unable to distinguish between items by feel or by temperature. From the perspective of the sense of touch, each object has been completely stripped of its meaning and symbolism. Consequently, there is no difference between this condition and images on a computer or smartphone screen. No matter what image or video content is displayed, the screen is still a screen.

These spheres are also a way of splitting the object, of breaking it down. Is this perhaps to better analyse it? Or, conversely, is it to show us our own reflection, making the viewer the subject of observation?

Through lenses or prism sheets, the PixCell series replaces the object in front of you with something that is purely visual. The relationship between the viewer and the object image is regulated by the positions of the spheres acting as lenses of varying sizes and the positions of the viewer’s eyes. That is to say, it is a situation in which there are two lenses between the object and the viewer. When using a telescope or microscope, there are also two lenses, an objective lens and an eyepiece.

In PixCell works, the lenses are in direct contact with the object, so they can be considered objective lenses. And when you look at numerous objective lenses at the same time, the multi-aspect image is perceived as a whole, stitched together by the viewer’s brain. The relationship between the object and the viewer is singular. This is because an image is not formed until the object, lens, pupil, and retina are in a straight line. In the same way as when you press the shutter on a camera, there is only a single view at that point. In terms of working on human perceptions via the forms and materiality of objects, my works can be considered sculptures, but they are not tied to classical materials, techniques, or viewing experiences. As I incorporate new materials and techniques, I am trying to produce actual, hitherto-unexperienced sensory experiences. Sculpture is a sort of interface.

Why did you choose these objects? Why a deer? There is a difference between treating the deer as an entity and treating it as a trophy. As an entity, it is an extension of taxidermy, whereas as a trophy, it is a symbol of domination. Was this intentional?

The deer is a symbol of ancient Japanese mythology. Deer lived in the wild throughout Japan, and sacred deer appeared to people who believed that they were messengers from nature or emissaries of the gods. Sacred deer are also depicted in the iconography of Japanese shrines and temples, and deer are seen as sacred animals. Today, global warming and an increase in the number of marginal villages in Japan have led to excessive growth in deer and wild boar populations, which have a damaging effect on agriculture. Consequently, the government has been obliged to designate deer as pests. But I am convinced that they can still be seen as messengers from nature. In addition to their stately presence and beautiful proportions, they have somewhat expressionless faces that give them a mysterious charm.

It’s for reasons like these that deer became the central motif for PixCell. Whether mounted as a trophy or a full body mount, they are stuffed animals. The difference between the two types of taxidermy is not particularly significant in my work. I have to say that mounted animals are strange objects. I think that their attraction lies in people’s desire to catch and possess moving things, and to share them with someone. This may sound egoistical, but that motivation is essentially the same as the motivation behind design and behind photographic or video media. So, what exactly is a mounted animal? You could describe it as a method for preserving and possessing images of animals, but as an image format it’s a little old-fashioned.

Nevertheless, I discovered that carefully repairing an old mount before transforming it into a PixCell work results in a more vibrant, fresh sculpture, so I believe it is possible to revive the deer’s sacred nature. Generally, only the exterior of a mounted animal is original. The inside is usually hollow or filled with something unsubstantial. But this sort of skin-only structure is not necessarily perceived as a negative characteristic. For instance, hollow papier mâché objects often appear in Asian festivals. In Japan, old Shinto has the concept of yorishiro, a place that provides a residence for spirits. Part of the Shinto belief is that in order for spirits to communicate their wishes, a body or physical object is needed to accept the hyoi, or ingression of the spirit. Creating PixCell works feels somewhat like creating this sort of yorishiro. This is the sort of thing I keep in mind each day as I work. 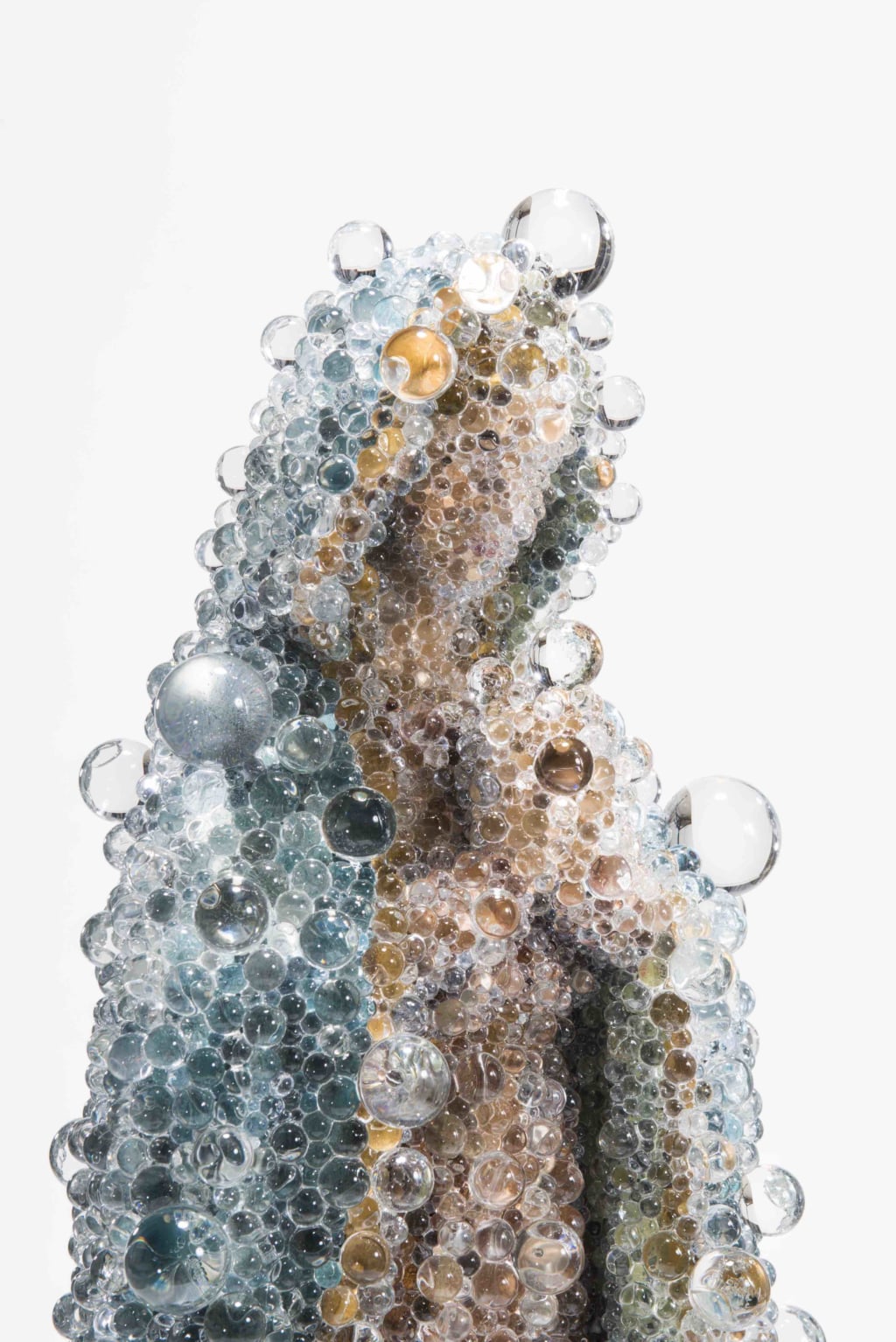 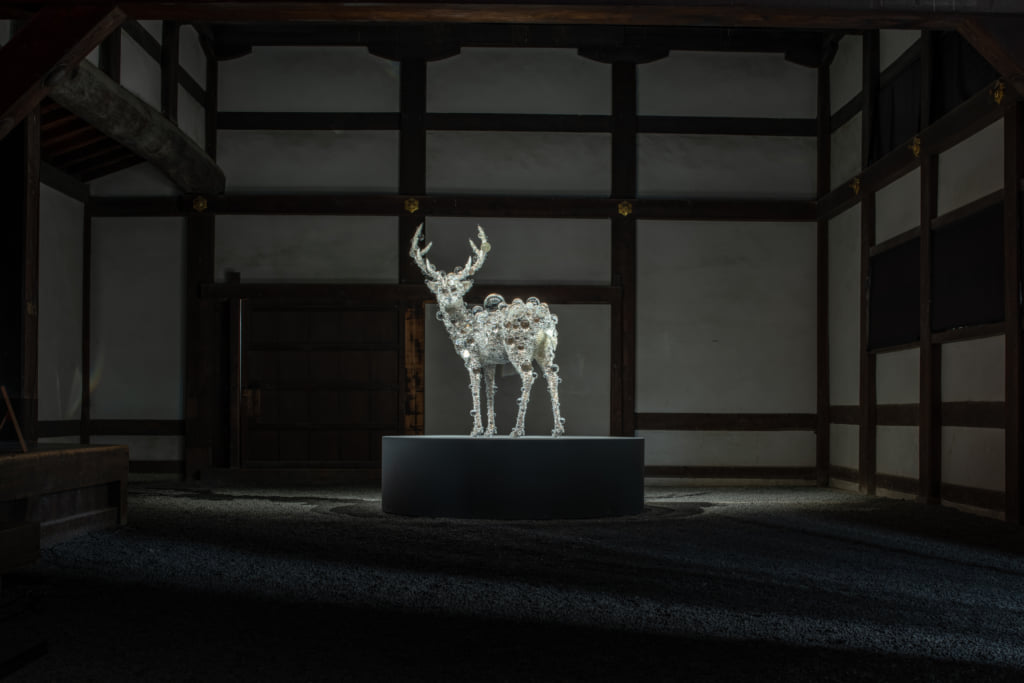 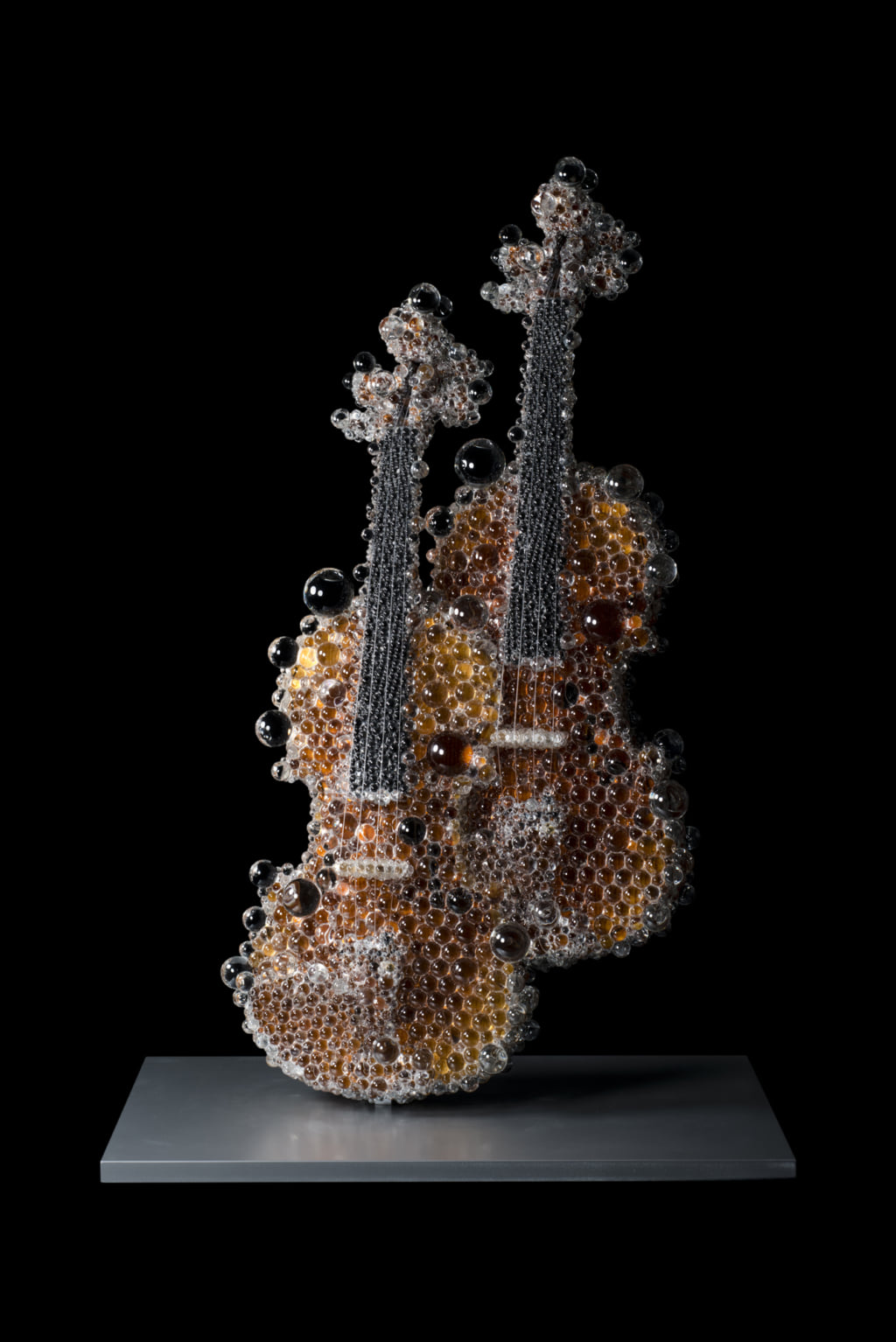 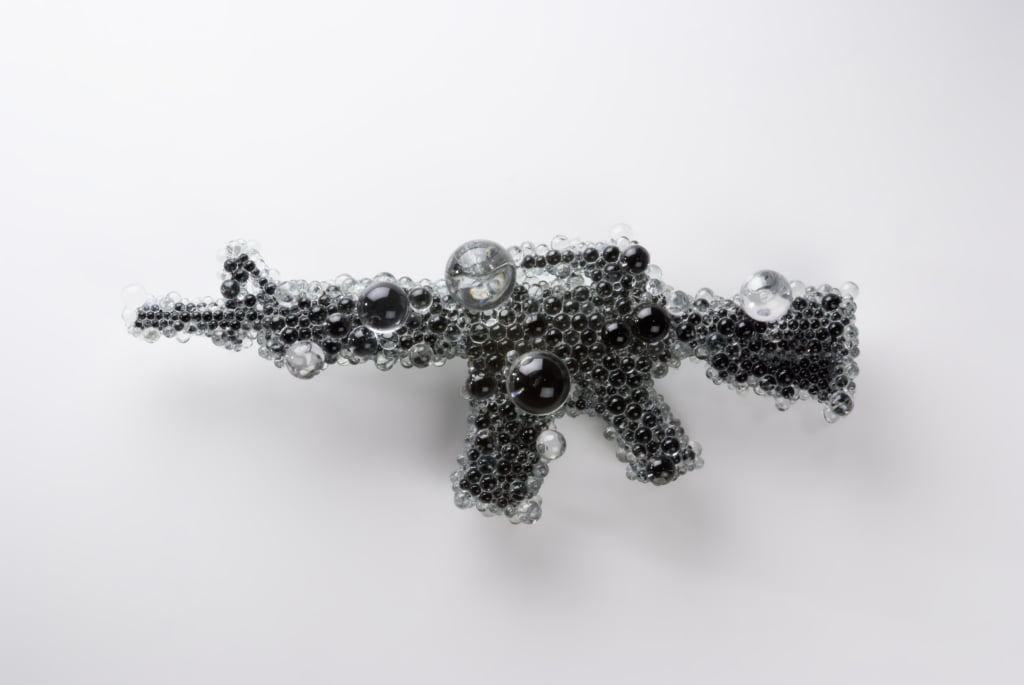 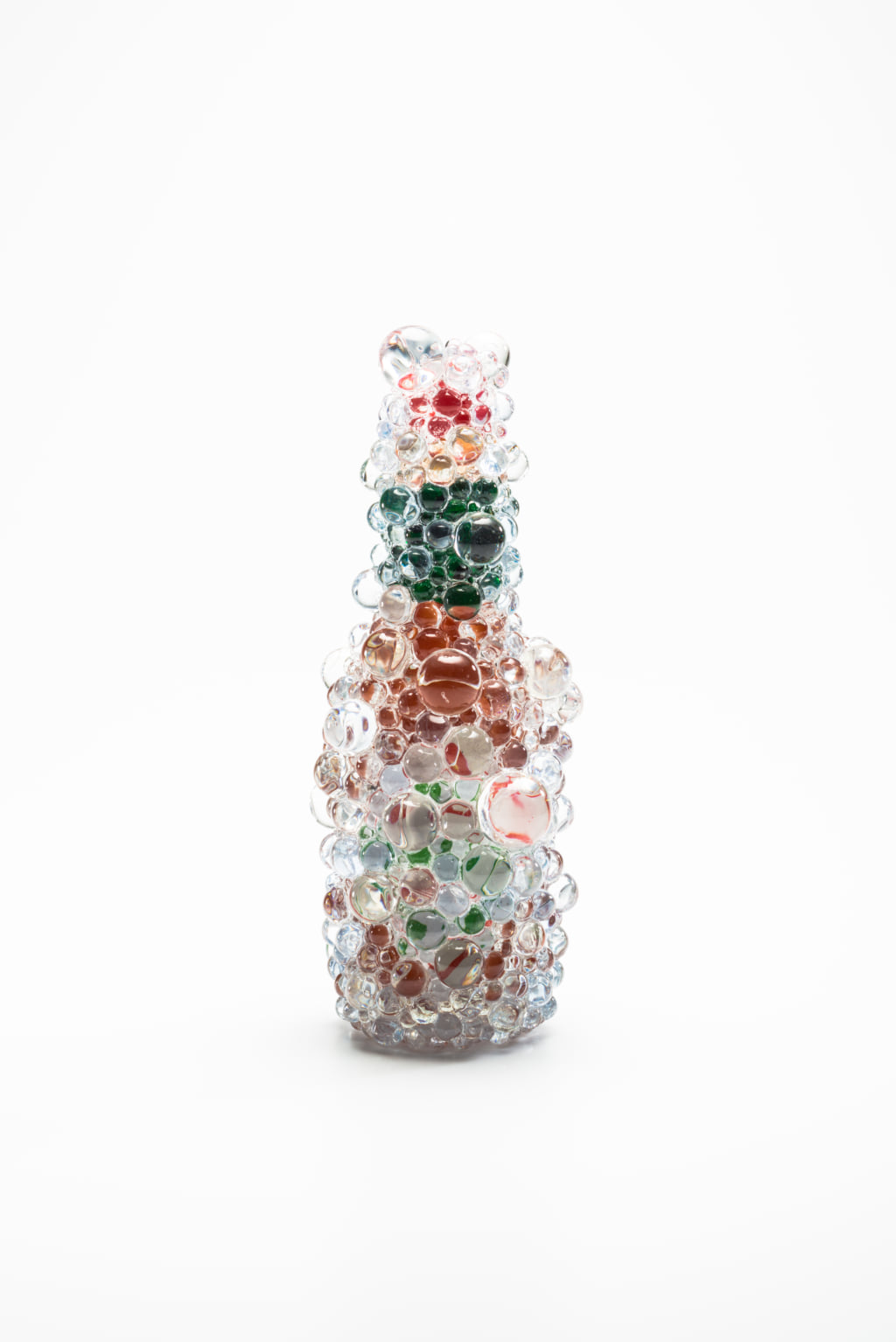 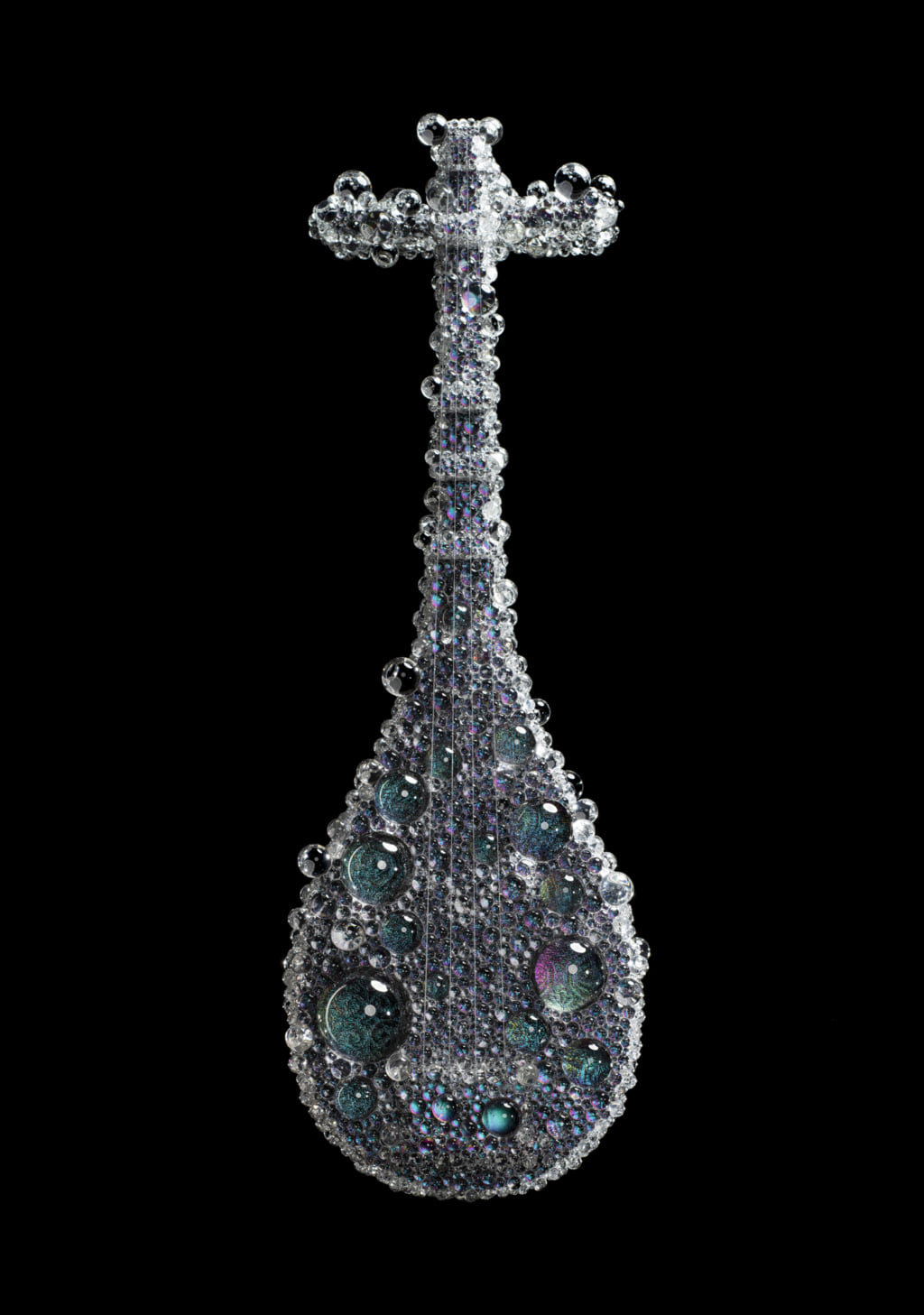