Masami Teraoka modernises the codes of printing in his paintings that critique contemporary social phenomena. 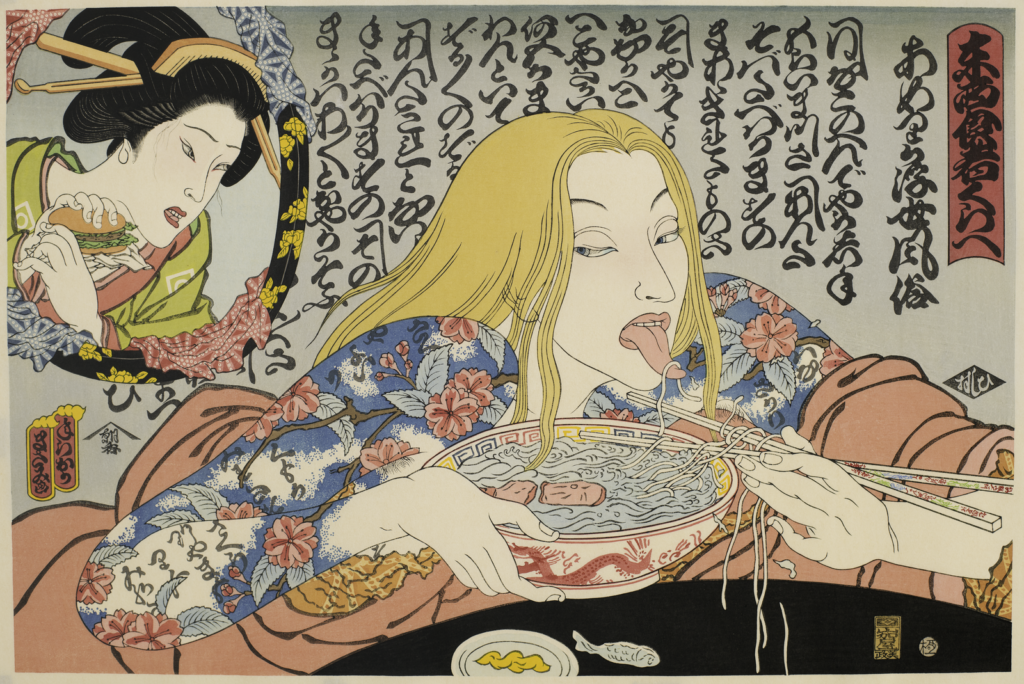 Can the invasion of American culture, its fast food, and its entertainment industry be stopped, as they crush everything in their path? The series McDonald’s Hamburgers Invading Japan by Japanese artist Masami Teraoka examines cultural homogenisation and offers a social and historical critique of the meeting point between the East and the West.

The artist, who hails from Onomichi in Japan, has been living in the United States since 1961, where he has been working with the Catharine Clark Gallery for many years. His politically engaged work demonstrates how the critique of globalisation can also address the issue of quality, an expectation in the dissemination of cultures across countries and continents.

Homogenisation from the bottom up

‘In 1976, McDonald’s had around 60 branches in Japan. I considered that as a catastrophe. I was shocked when I saw the golden arches, which had already invaded Vancouver in Canada at the time… I felt so devastated to see that such poor quality hamburgers were poised to take over the world. The homogenisation of ethnic cuisine concerned me’, the artist explains to Pen.

Masami Teraoka’s concern goes beyond the issue of American culture invading the entire world, however. In his art, he addresses the notion of the demand for excellence. ‘How can we be content to chew gum, thinking that it’s bread, believing that we’re eating incredible hamburgers? McDonald’s does not seem to care about the rich tradition of American hamburgers’, he continues.

His paintings draw on the codes of ukiyo-e prints in order to disseminate the best of this movement to the United States. Fascinated by the ability of ukiyo-e to connect aesthetics and narrative, he set himself the mission to ‘introduce the vocabulary of ukiyo-e within all the major artistic movements of the 1970s.’ This desire also guided the work he exhibited at the Whitney Museum, in parallel with an exhibition by Andy Warhol. In the series McDonald’s Hamburgers Invading Japan, a woman who looks like a geisha appears holding a hamburger and looks on with jealousy as her neighbour enjoys a bowl of noodles. In other pieces, hamburgers are brushed aside, trampled underfoot. The message is clear.

In the 1980s, the artist tackled the AIDS crisis in his series AIDS, depicting frustrated samurai and geisha trying to open condom wrappers. Masami Teraoka’s aim was to shed light on AIDS at a time when doctors and politicians were concealing or avoiding addressing the issue.

McDonald’s Hamburgers Invading Japan is an ongoing series by Masami Teraoka. The artist’s work can be viewed on the Catharine Clark Gallery’s website. 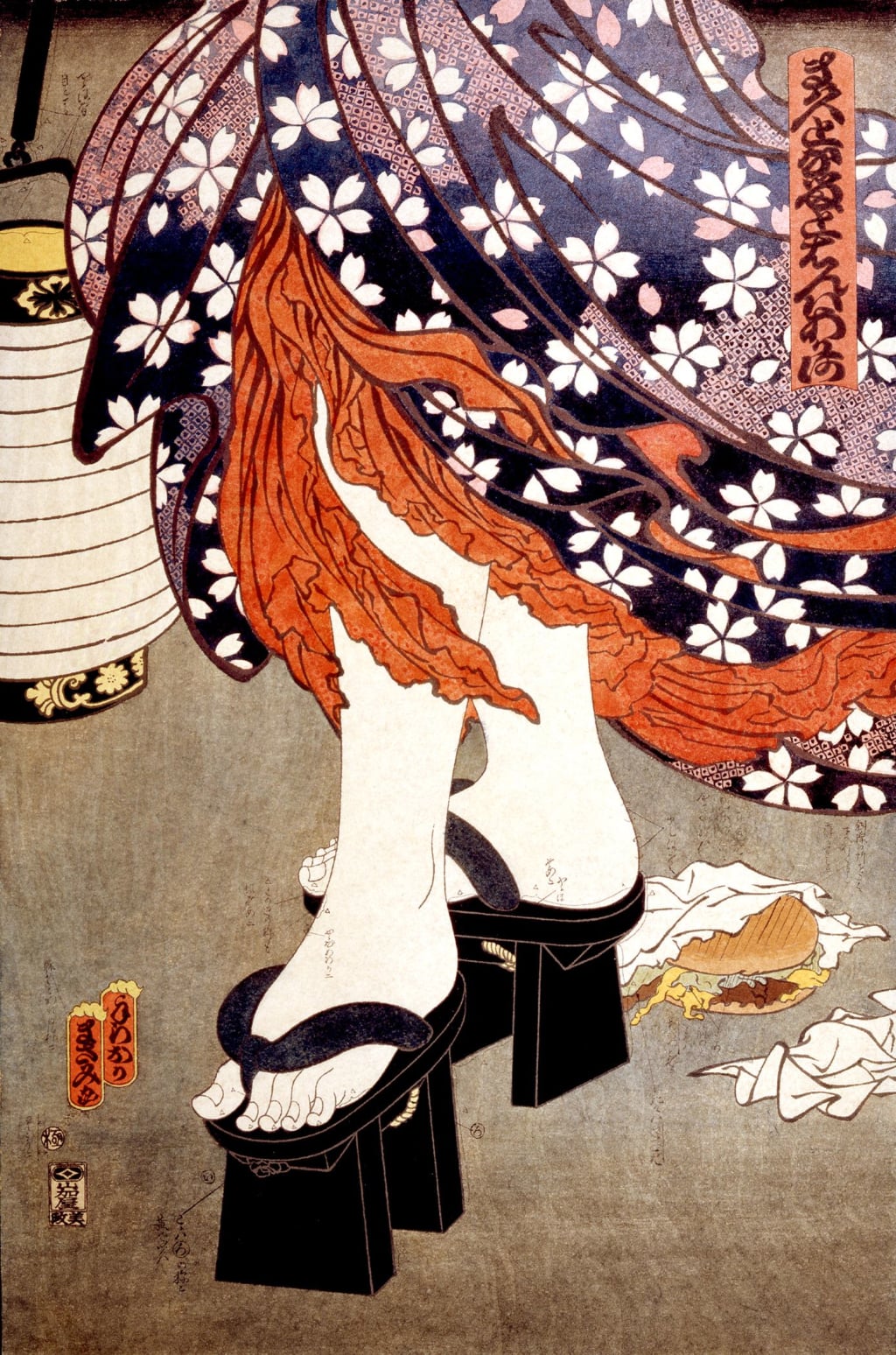 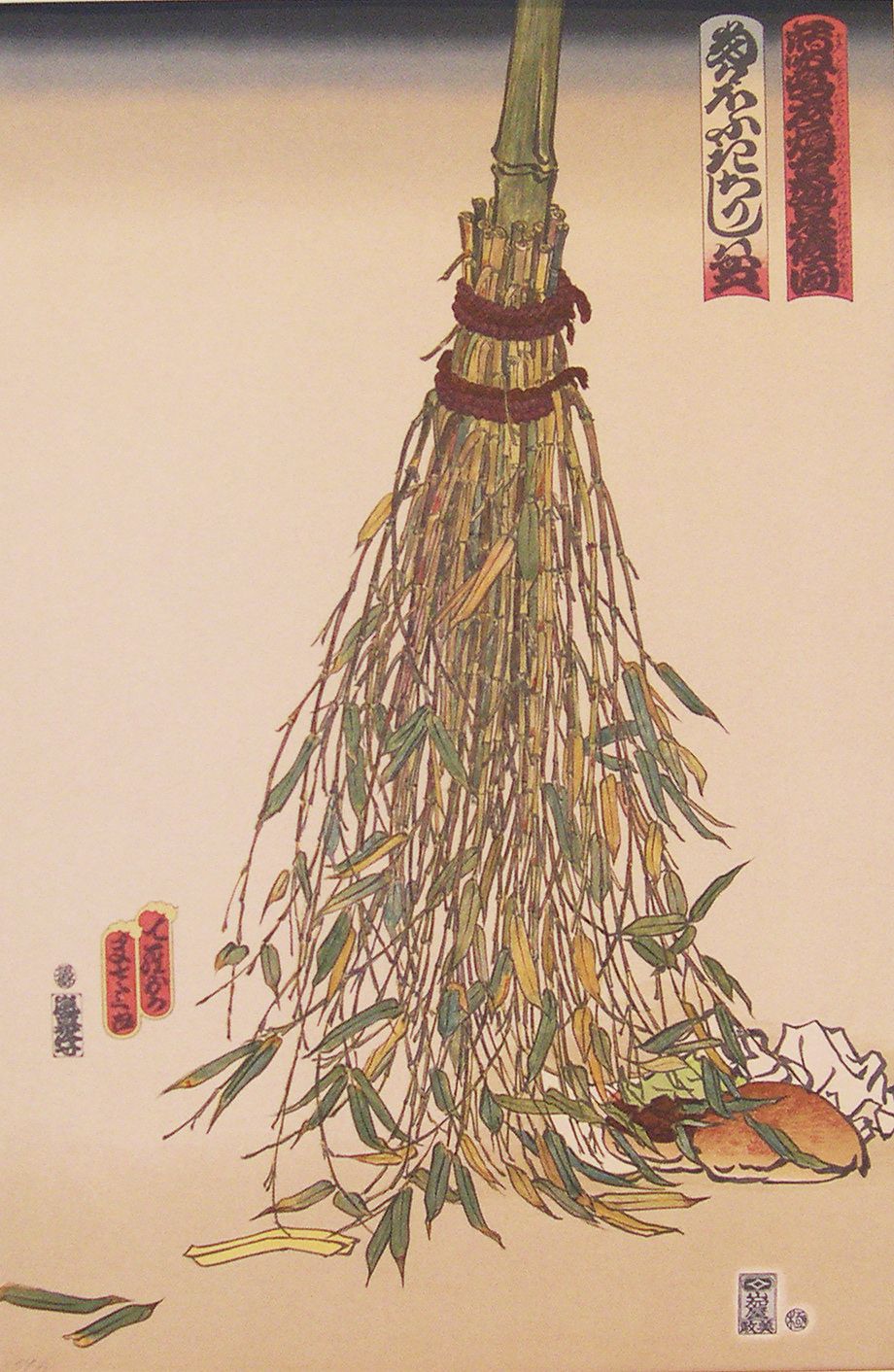