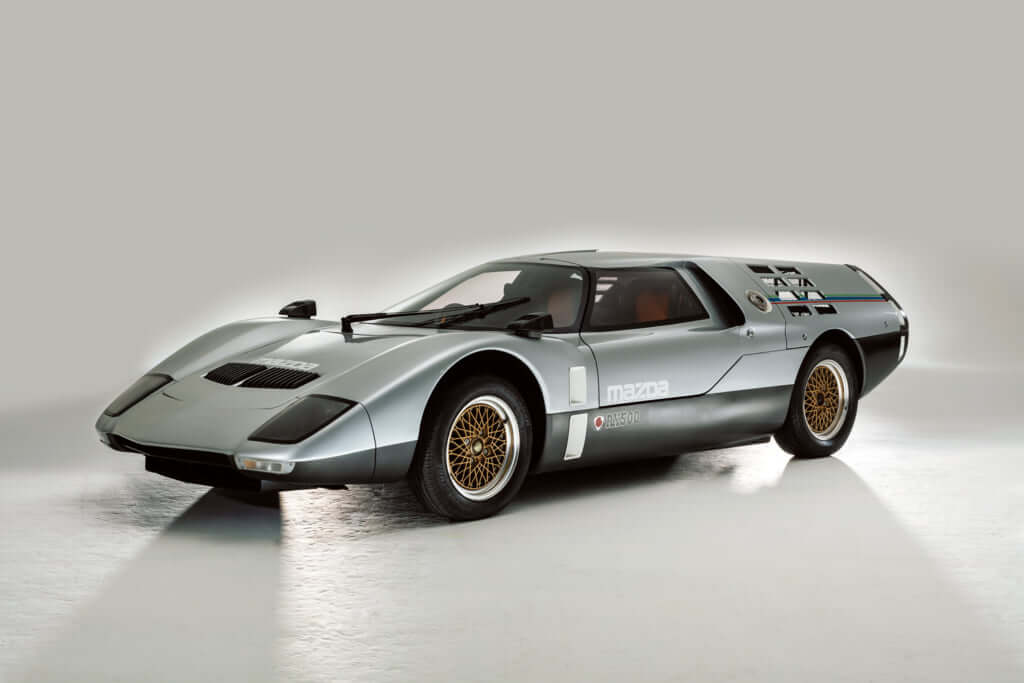 “It was not a mere show car, but a prototype vehicle, developed as the successor to [the Mazda] Cosmo Sports, with the concept of a midship rotary sports car,” according to the designer of the Mazda RX500,Shigenori Fukuda.

In 1970, when all of Japan was in a bustle with the holding of the Expo ’70 in Osaka, the 17th Tokyo Motor Show took place at a time when the automobile industry was arguably at its pre-oil crisis peak. The floor of the show site was crammed with cars, including the Toyota EX 7, the Nissan 270X and 126X, and the Isuzu Bellett 1600MX: all super cars with wedge-shaped designs.

Standing out conspicuously from the rest, however, was a yellow super car, known as the Mazda RX500: a midship sports car manufactured by Mazda—a company that had made its name commercializing the rotary engine—in commemoration of its 50th anniversary.

“At the time, Masataka Matsui, chief of [Mazda’s] design division, advocated what was known as ‘offline 5:5.’ The idea was that it was OK to try for something that would only have a 50-percent success rate—that is, it was all right to be ready mentally to get rid of half [of what had been developed.] Since 1965, people in the company were carefully watching developments overseas, and the sentiment was that [Mazda] had to create a midship [car], too. At that time, discussions began about what to do about the successor to the Cosmo, and I seem to remember having it mentioned to me, rather casually, that we ought to develop a midship car. But as it was not a formal project, the idea was to have it carried out by ‘like-minded members.’ About five of us volunteered to join the project, including me. All the work was done after normal working hours. While working on the [Mazda] Familia during the daytime, we then did everything [for the project] in our overtime.” 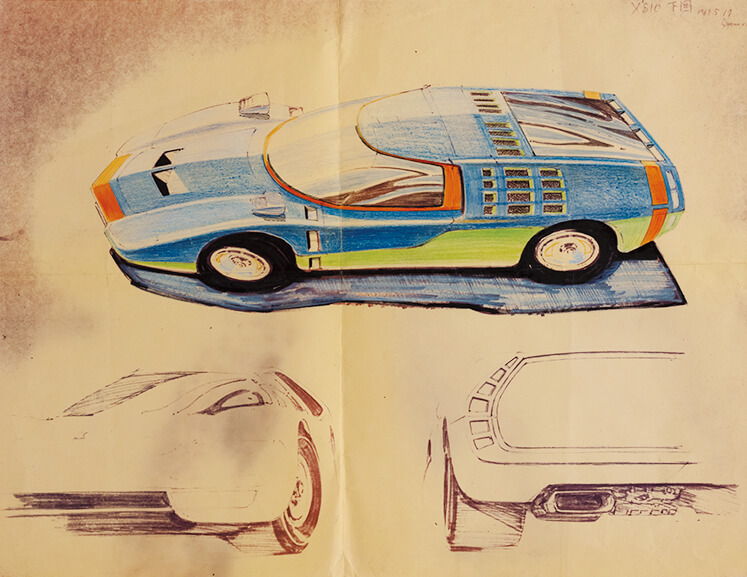 Thereafter, five different models were produced, and after wind-tunnel experiments were conducted, Fukuda’s design was selected because it was the one with the least air resistance, although the initial proposal—namely, a coupe-style car with a sagging roofline—was redesigned into a wagon-style car that had a lower drag coefficient. At that occasion, Fukuda made a proposal for a 3-in-1 formula, enabling it to be either a racing style with the addition of a rear wing to the coupe, with the rear cowl made exchangeable, or wagon style. That was the car that ended up being produced.

In January 1969, at an event leading up to the celebration of the 50th anniversary of Mazda’s founding [as Toyo Cork Kogyo Co., Ltd. in January 1920], a big splash was caused by the announcement of the RX500 name together with a display of a clay model of the car. That reaction, in turn, resulted in the decision to manufacture the real automobile.

Fukuda says, “It was also decided to display the car at the Tokyo Motor Show, so we had to rush and make the interior as well. That design was mainly the effort of Ryo Uchida, who had entered the company in the same year as I.”

At the outset, the car was colored green, but it was decided to coordinate everything in yellow, in line with a proposal put forward by the architect Kisho Kurokawa, who was overseeing the Mazda booth at the Tokyo Motor Show that year. At the last minute, then, the body of the car was repainted in yellow. 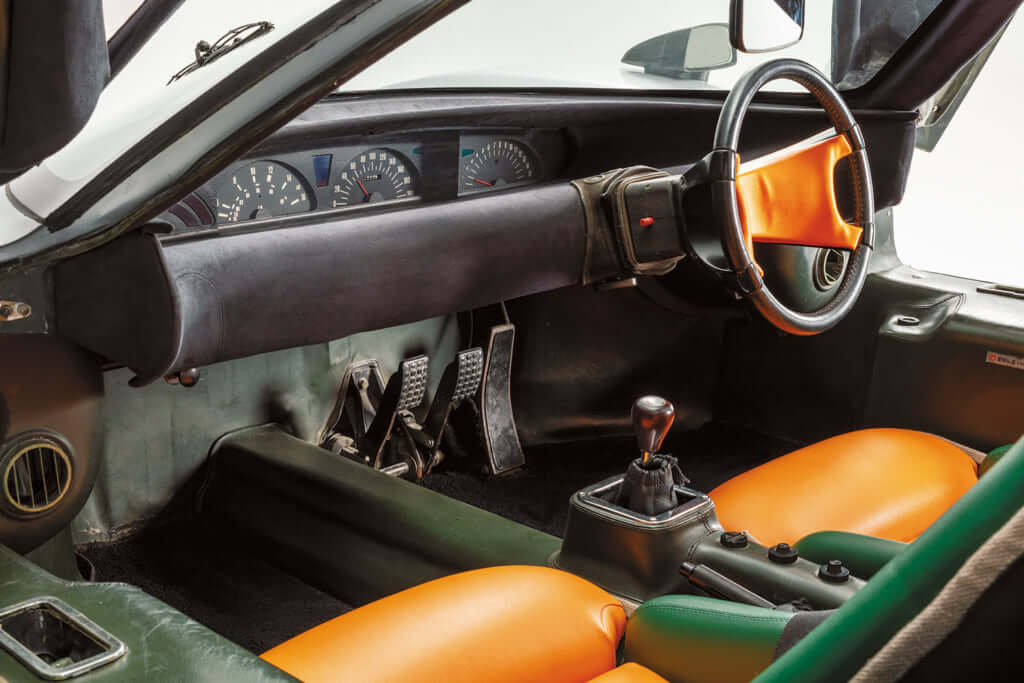 Fukuda continues, “You wonder what kind of impression the car made at the time of the show? Well, I can only say that it was good that the car didn’t resemble that of any other manufacturer (laughter)! After the show, the car set off on a tour of dealers around the world. Because it had sustained a bit of damage, though, it was decided to clean it up, resulting in it being given a new paint job in today’s silver color.”

However, after that, neither the RX500 nor any other midship sports car descended from it ever made its way into the world. The biggest reason for that, according to Fukuda, was that “it was too large in comparison with the Cosmo Sports.” Although Mazda itself was pioneering in the sense of having been the very first Japanese manufacturer to completely carry out the in-house development of a midship test car—the R16A, in 1965—it had been unable to find the optimal solution to making the car compact enough for mass production. After that, then, the world was hit by the oil crisis [in 1973], which changed everything.

It has now been fifty years since the electrifying debut of the RX500 back in 1969. With a model of the car before him, Fukuda went on to reflect on the design at the time. 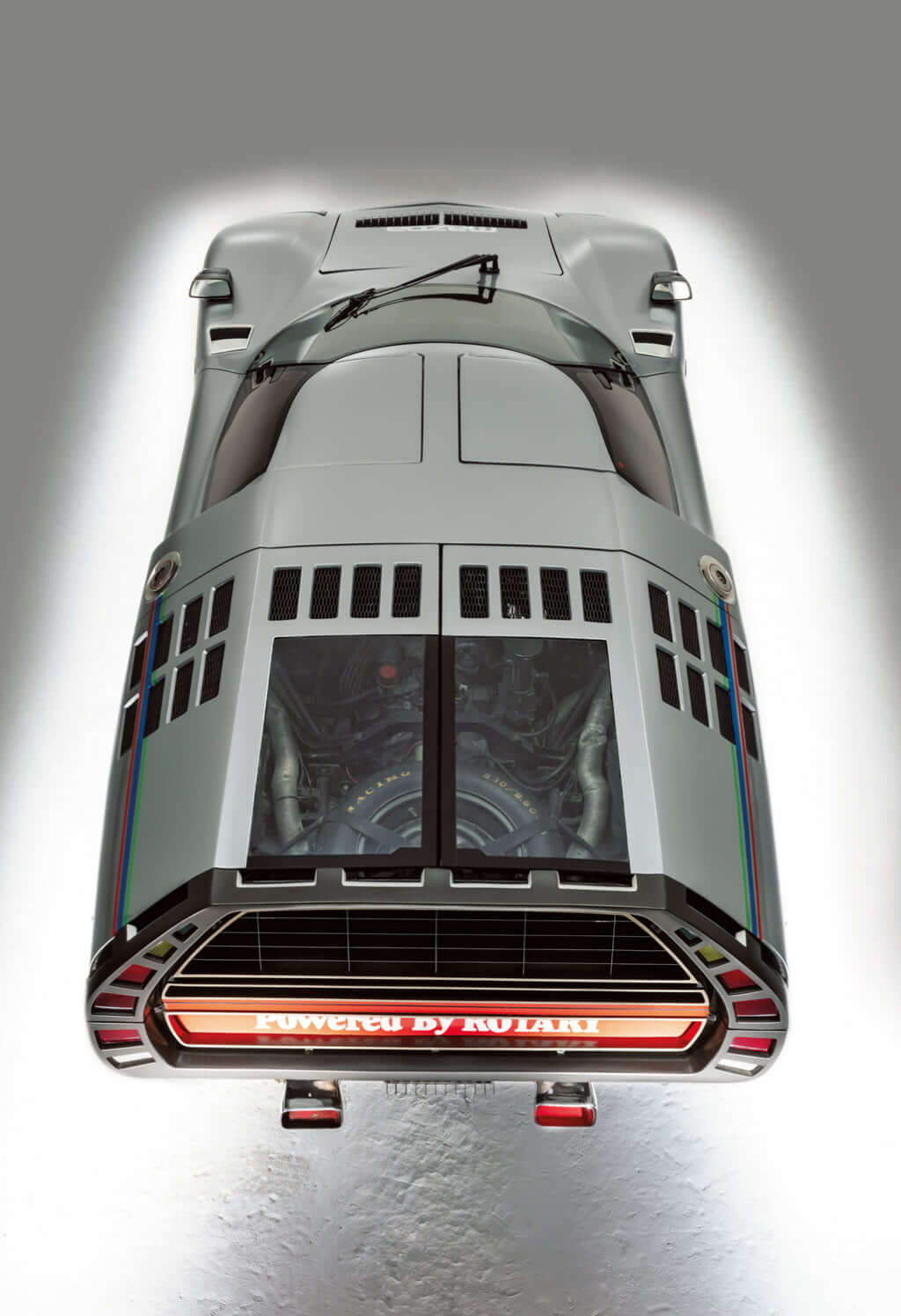 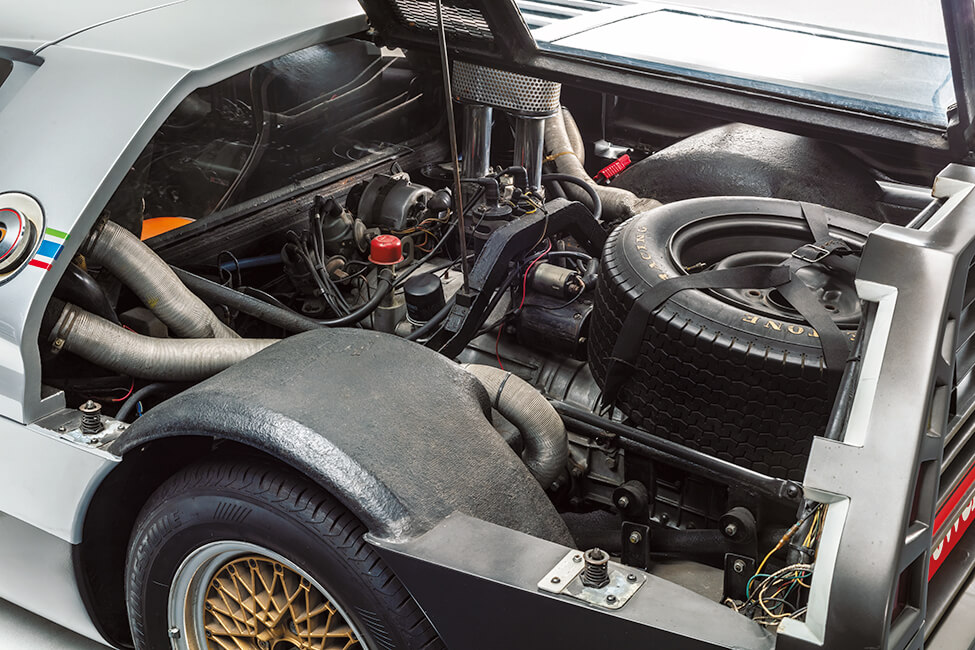 “The image I had was to combine racing-car and airplane design. As you can see, there are quite a few airplane-like motifs in the car, such as the canopy, air outlets, and after burners. I also wanted to give the tail lamp a futuristic look. Although it wouldn’t be acceptable legally, the lights were originally set to turn yellow when braking started, red when the car was coming to a stop, and green when the car was gliding down the road normally at fast speeds. The idea of the tail came from the spaceship in the movie, 2001: A Space Odyssey. I wanted to make the car as unlike an automobile as I could.”

Indeed, the visual impact of the RX500 as a ‘child of the space age’ has never lost its luster since then. Meanwhile, a closer look reveals that the design is in fact composed of subtle and sophisticated lines, down to the finest details. In particular, the line leading from the door to the rear intake presents a quite complicated expression.

“That is definite proof of our having been educated by Bertone [the Italian automobile company],” says Fukuda. “There are no monotonous lines, thanks to the addition of subtle and delicate curves and lines. Besides, the car is also interesting because of several other aspects, such as having an intake opened in the fender mirror, where the pressure is at its highest, to bring fresh air into the car interior.”

Next year—2020—marks the centennial of Mazda’s founding. Will we see the emergence of another model to celebrate that landmark: one that will exceed the impact of the RX500? 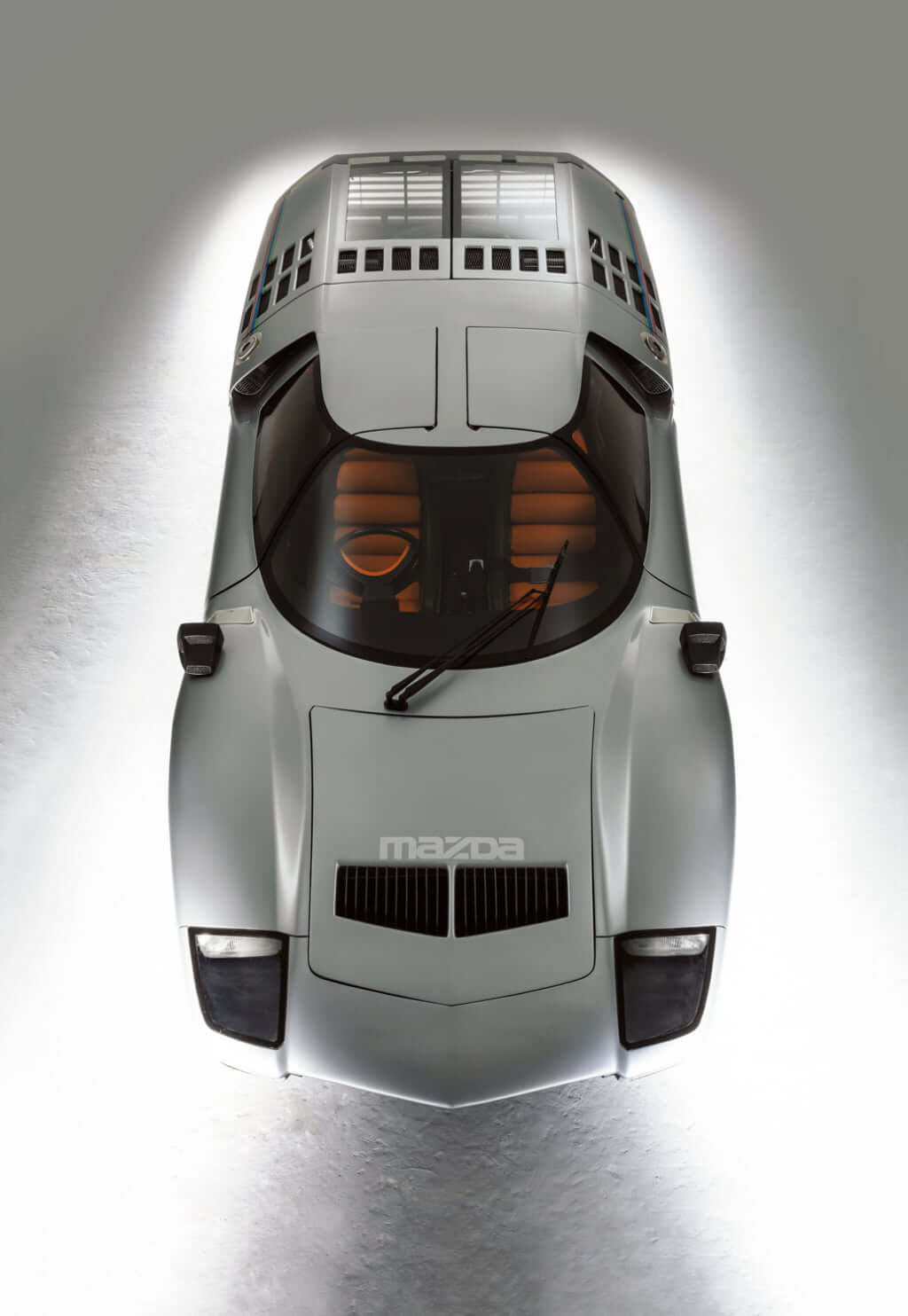 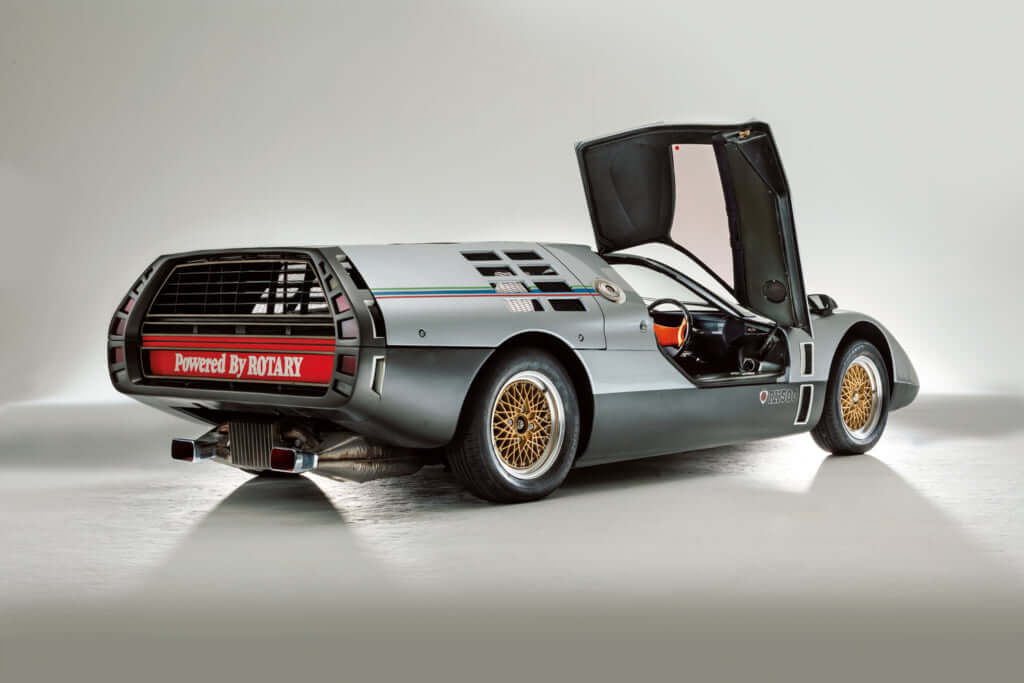 #01: The Fighter Jet-Shaped Mazda RX500 in the Words of its Original Designer

#03: The Nissan Prototype MID4, which Ended as Just an Illusion >