Recipe for ‘Koji’-Aged Steak by Rich Shih and Jeremy Umansky

This mould adds an 'umami' taste to meat that is found in other Japanese condiments like miso and soy sauce. 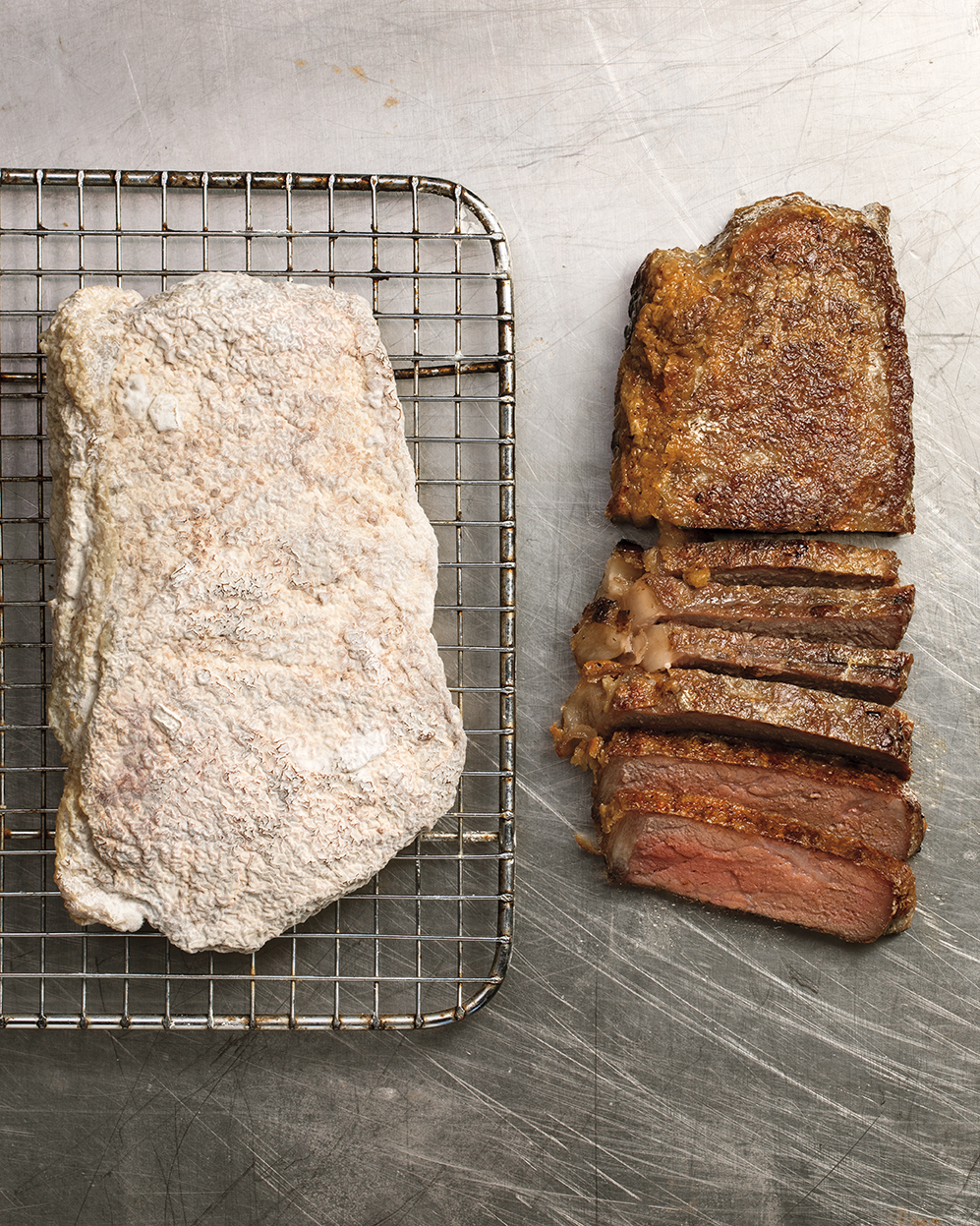 In their book Koji Alchemy: Rediscovering the Magic of Mold-Based Fermentation, Rich Shih and Jeremy Umansky shine a spotlight on this fermented mushroom that lies behind the Japanese umami taste, found in soy sauce, miso, and mirin, a very light rice alcohol.

Koji Alchemy: Rediscovering the Magic of Mold-Based Fermentation examines koji fermentation techniques and processes, as well as the art of using it to dry food. This theoretical information is accompanied by around thirty recipes that showcase koji and its virtues, which enable it to rapidly age charcuterie, cheese, and vegetables, for example a recipe for rye bread made with amazake, a whole miso roasted butternut squash, and this recipe for matured beef.

For the latter, Rich Shih and Jeremy Umansky explain by way of introduction the purpose of the first step that involves seasoning the meat with salt and sugar, which might appear surprising. ‘We do it for several reasons: for the taste and flavour, to help fend off pathogenic agents, and to add moisture to the surface of the meat so that the corn starch and the koji spores can adhere to it. The sugar acts as an instant food source for the mushroom, which allows it to feed while developing more quickly than it would if it had to produce its enzymes and then feed.’

Calculate 1.75% of their weight and, in a large bowl, season the steaks with the required amount of salt and sugar.

Leave to sit for 20 minutes or until the steaks start to weep.

Mix the spores and the corn flour, then cover the steaks fully and uniformly.

Add more corn flour if needed to ensure the meat is completely covered.

Place the meat in the incubating system. We often place grill trays in a deep container and wrap them in clingfilm.

After the 36 hours have passed, the culturing process should be complete.

Place in the fridge until ready to use.

Koji Alchemy: Rediscovering the Magic of Mold-Based Fermentation (2020), a recipe book by Jeremy Umansky and Rich Shih, is published by Chelsea Green Publishing.

Rich Shih is a food preservation consultant based in the United States. He has been working with koji and miso for years. He is also an exhibit engineer for the Museum of Food and Drink (MOFAD) in New York. Jeremy Umansky is the owner of and chef at the restaurant Larder, located in Cleveland, Ohio. It was nominated by the James Beard Foundation as the Best New Restaurant in America in 2019. 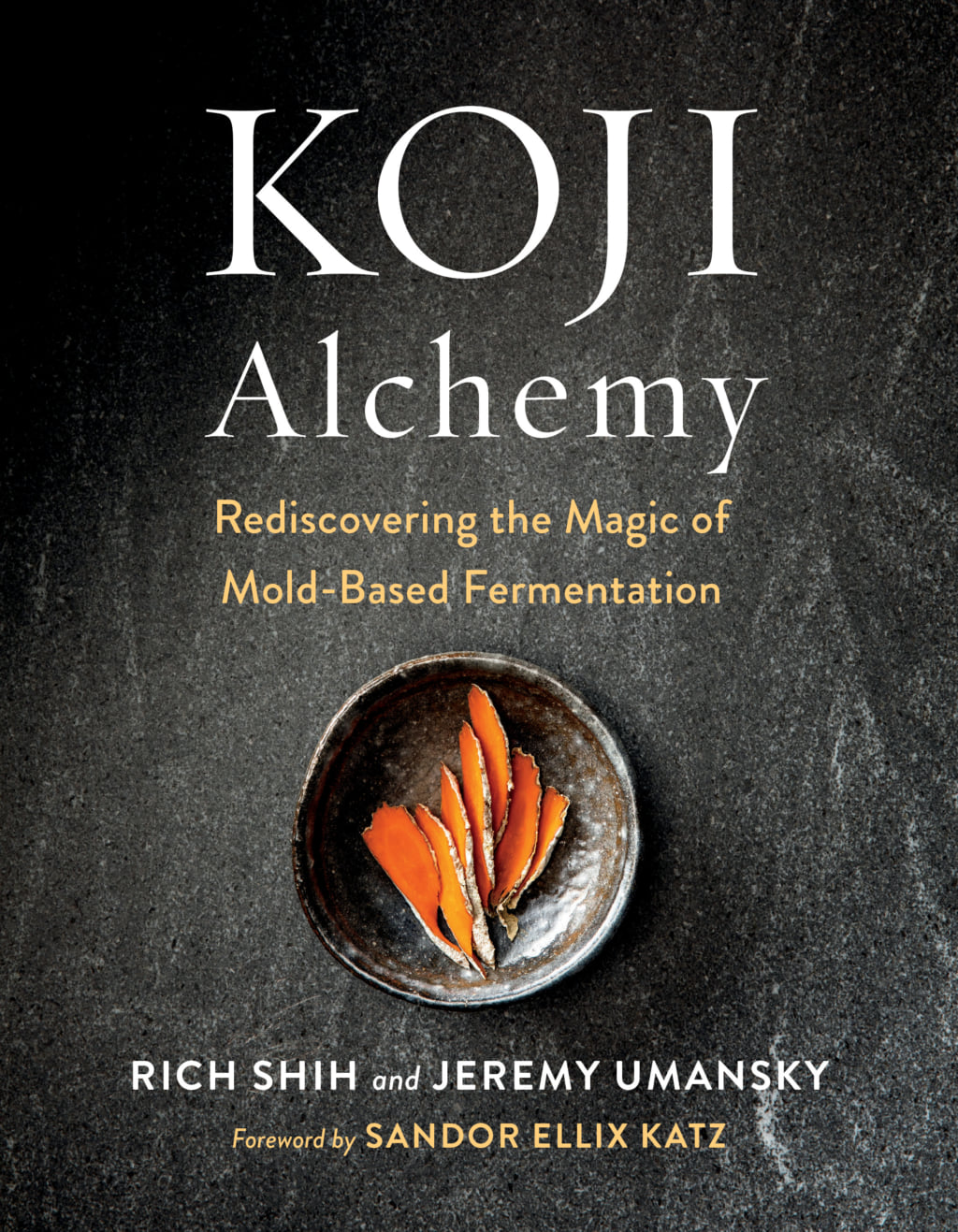 The following excerpt is from Shih and Umansky’s new book 'Koji Alchemy: Rediscovering the Magic of Mold-Based Fermentation' (Chelsea Green Publishing, May 2020) and is reprinted with permission from the publisher.