A curator’s analysis of the unconfined, diverse works that transcend the boundaries of photography. By Ayano Hayashi, Curator. 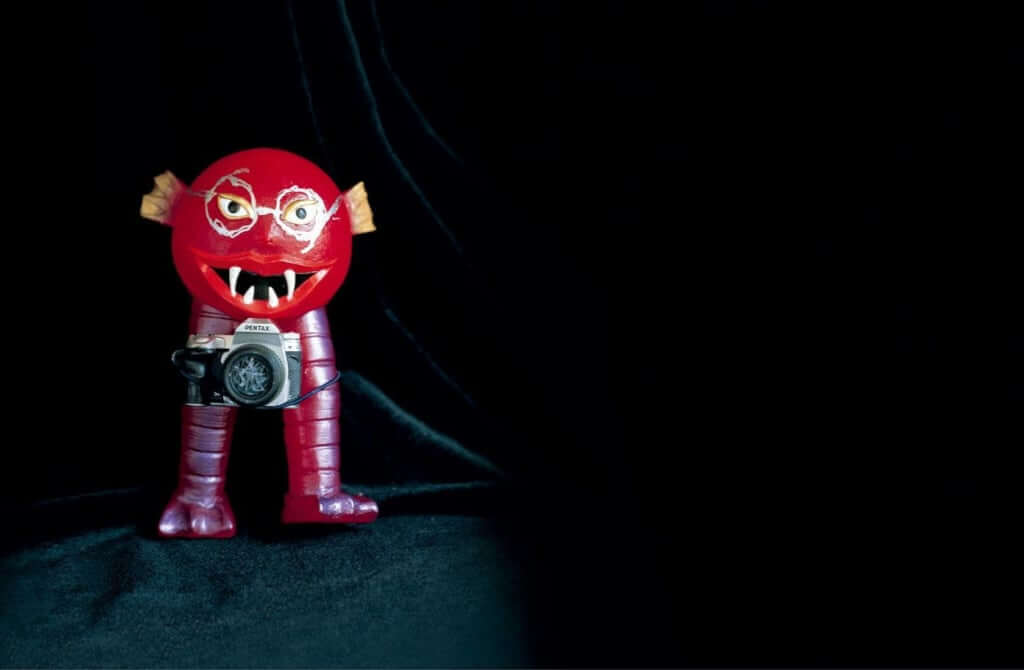 Araki the Photo Devil Shot exclusively for 'Pen'. Araki created this doll for his artwork, which was showcased at his solo exhibitions, including 'Nega-Eropolis'.

A camera boasting a broken lens hangs from the neck of a red devil doll. This is Araki’s impression of himself. While a master of photography, his creativity pushes the boundaries of what most believe photography is.

‘Paradise’, with its silence and flavor of mortality, is abound with the memento mori symbolism of skull-laden medieval still-life work. Araki embarks on each artistic journey from a concept to create his art—not by observing other work nor solely by taking pictures. His artwork is purely conceptual.

He uses this approach to produce acrylic hand-painted photos. With ardor, he splashes paint onto monochrome images, and the effect is vivid and dynamic. A balance of colors and brushstrokes offer a rhythmic and spirited viewing experience.

Araki feels life is represented by color and death by monochrome, so painting over monochrome prints breathes life into them. His work is unconstrained, shattering any pre-existing idea of what photography is. The images on canvas create a symbiotic relationship between photography and painting. Within his work, his genius lies with a sense of harmony that is true to who he is.

In his limited ten years as an artist, Van Gogh created more than 2,000 paintings. Matisse, in his search for pure colors, traded his paintbrush in for a pair of scissors, preferring cutouts. And, Picasso whose intellectual fodder was gleaned from Mikhail Bakunin’s motto, ‘The urge to destroy is also the creative urge’, single-handedly reshaped the art of his time.

When one stands before Araki’s work, a pedigree of precursive artists come to mind. Then, with an onslaught of ideas one realises that the word ‘photographer’ doesn’t apply to Araki, as it is impossible to interpret his work through the narrow lens of traditional values.

Araki’s powerful work of every genre stimulates not only all five senses, but also moves the viewer’s soul.

The way he plays with light opens the mind, allowing one to hear the reverberating sound of stiletto heels, as a woman sashays down the street. One’s olfactory senses come to life as the fragrance of dried flowers fill the nose, and memories of victuals rise to the taste buds. Each photograph communicates through the sense of touch, lending a sense of warmth to an outstretched hand.

Through Araki’s Sentimental Journey, he endeavours to depict human life through his own body—a visceral communication to anyone who enjoys his work. His thoughts on life and the circumstances of death, which he once came close to through an illness, come out in powerful images. His work speaks to conceptual art, yet not in style, new media or technique. Every photograph offers undeniable life.

In Araki’s world, entwined with light, sound, smell, taste, and warmth, we regain our purest sense of reality. Our heartbeat becomes Araki’s, that tenacious Photo Devil, who tirelessly snaps photos. His art may only be understood by the next generation, much like the work of Van Gogh.

We have no choice but to try to keep up, as he continues to push the boundaries of art and meaning.