His Latest Masterpieces are Shot Based on Five Themes

To understand Araki’s art, we will introduce photographs shot based on five themes that are representative examples of his various styles, which he produces on a daily basis. These reflect Araki’s personality, and he created them exclusively for Pen.

“Paradise’ is weekend photography’. Araki hides away in his home, not letting anyone in as he shoots for the ‘Paradise’ series. Published in 2015, the monochrome Paradise series is still fresh in his memory, and he has further developed it with ‘Monster’s Paradise’ for Pen. The monster, an erotic doll, along with the green lion and the Photo Devil doll. A mask, gazing off into the distance, rests in vivid flowers and vegetation. The flowers, now in full bloom, will soon wilt, giving the piece nihilistic overtones delivered through the lifeless figures. ‘Monster’s Paradise’ conveys a sense of mortality. ‘The Goddess of Life is present only if a photo is taken in colour’. Araki’s Paradise wavers precariously on the threshold between life and death. 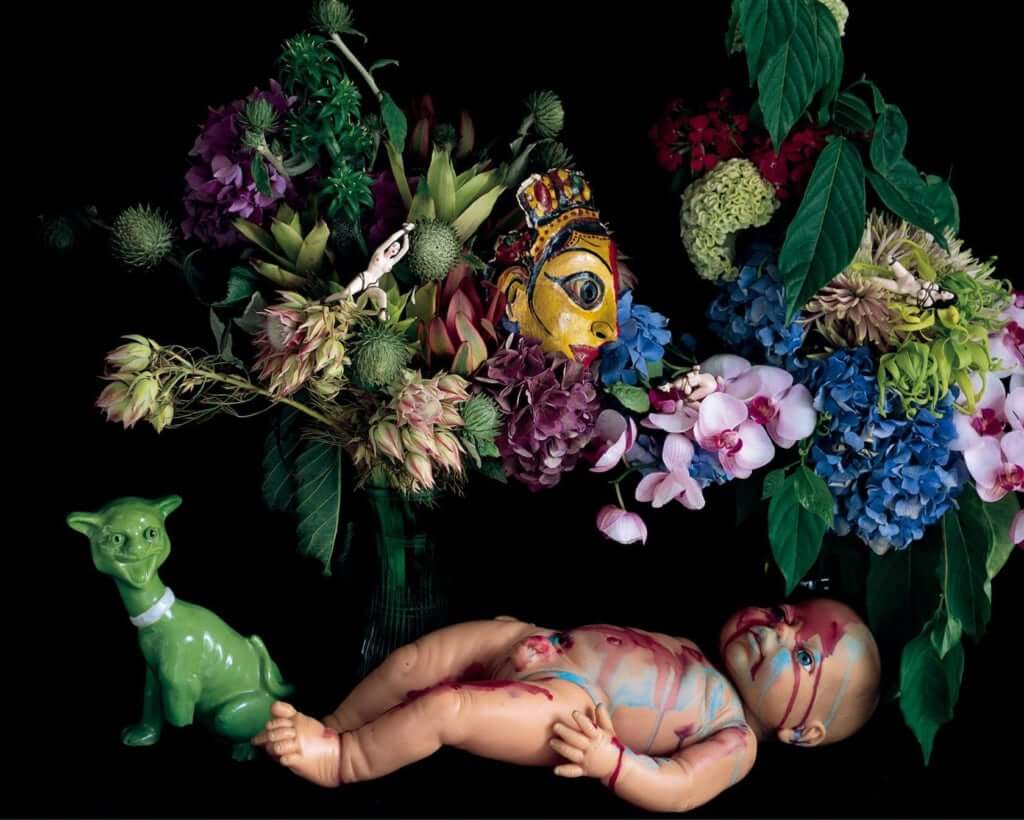 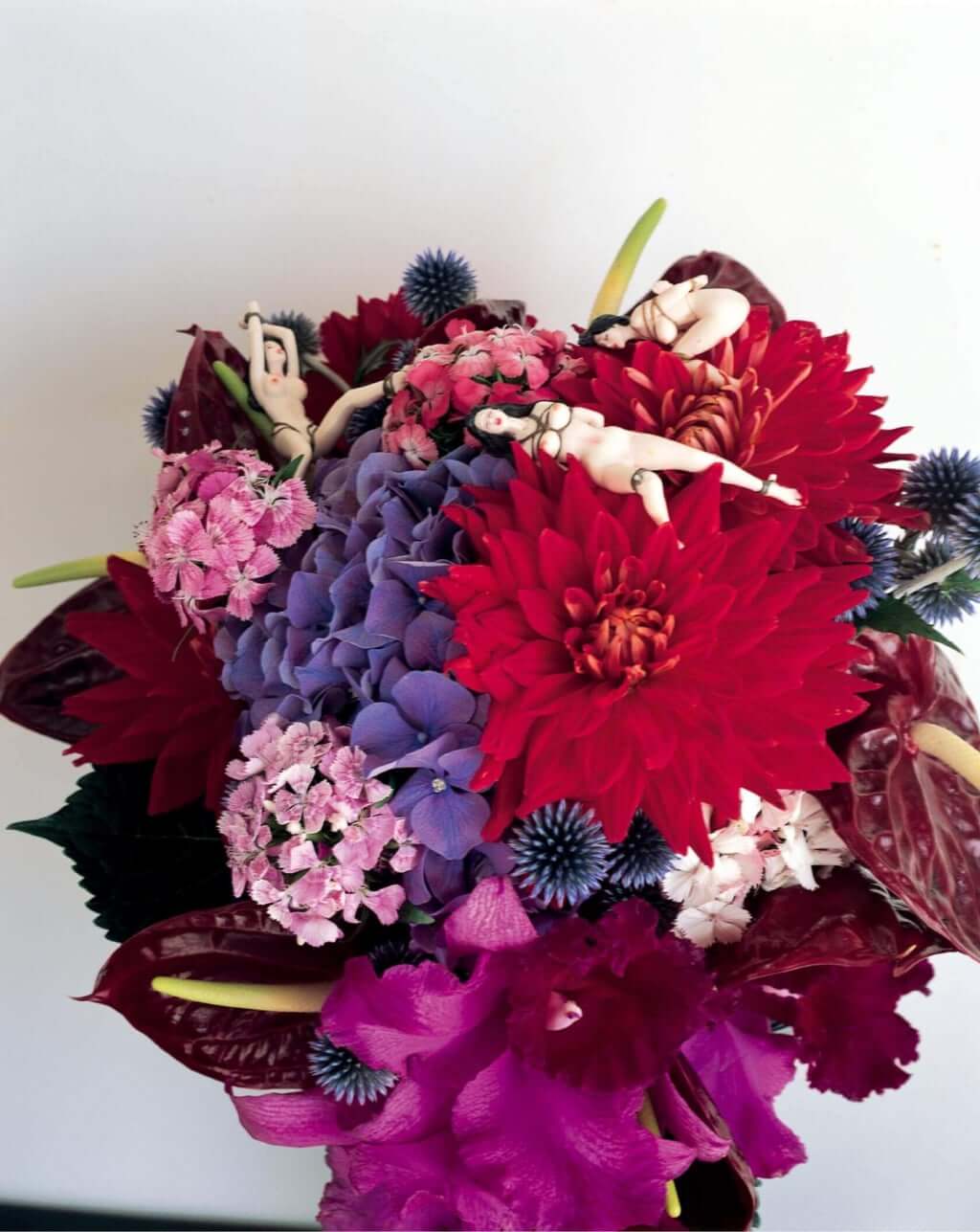 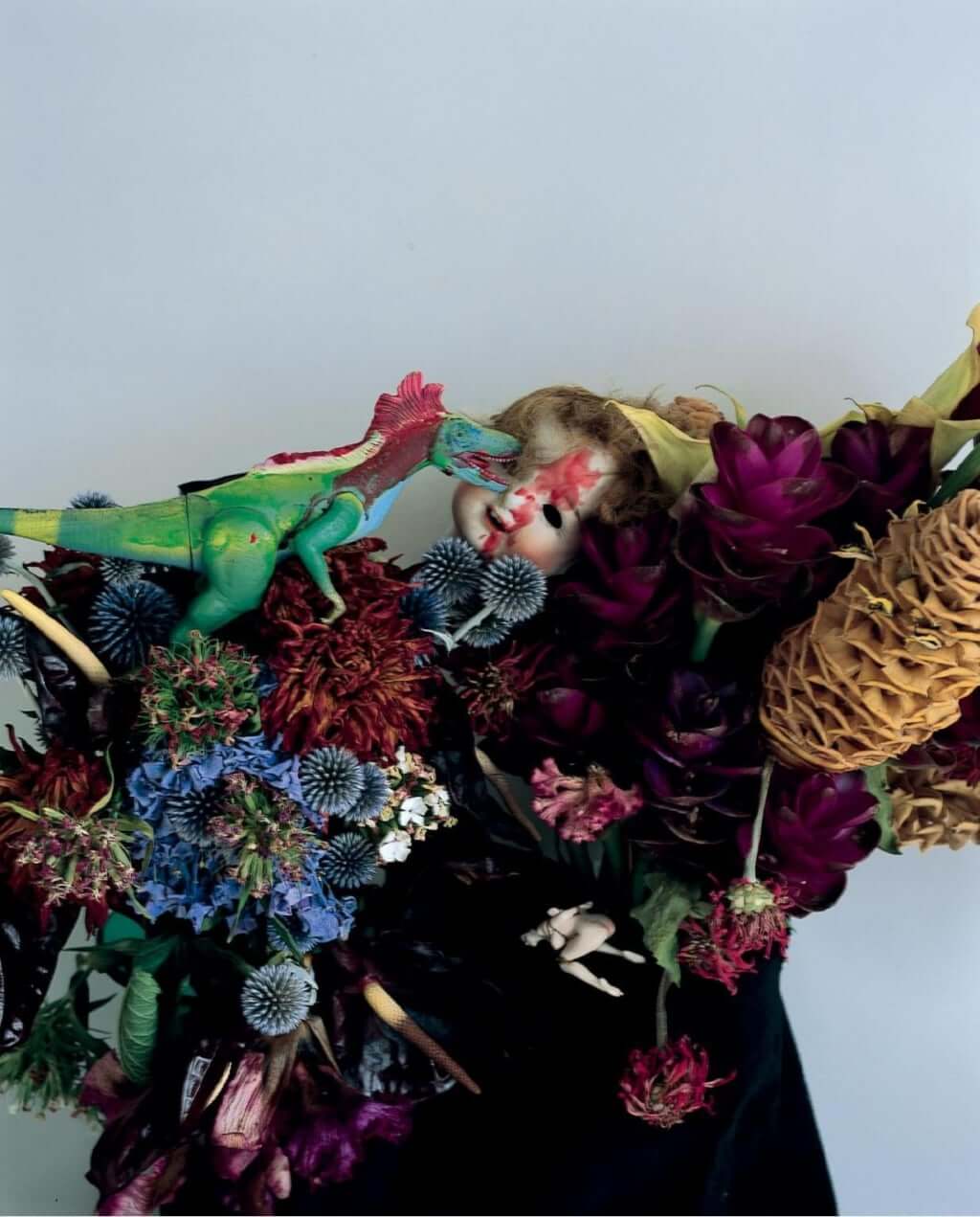 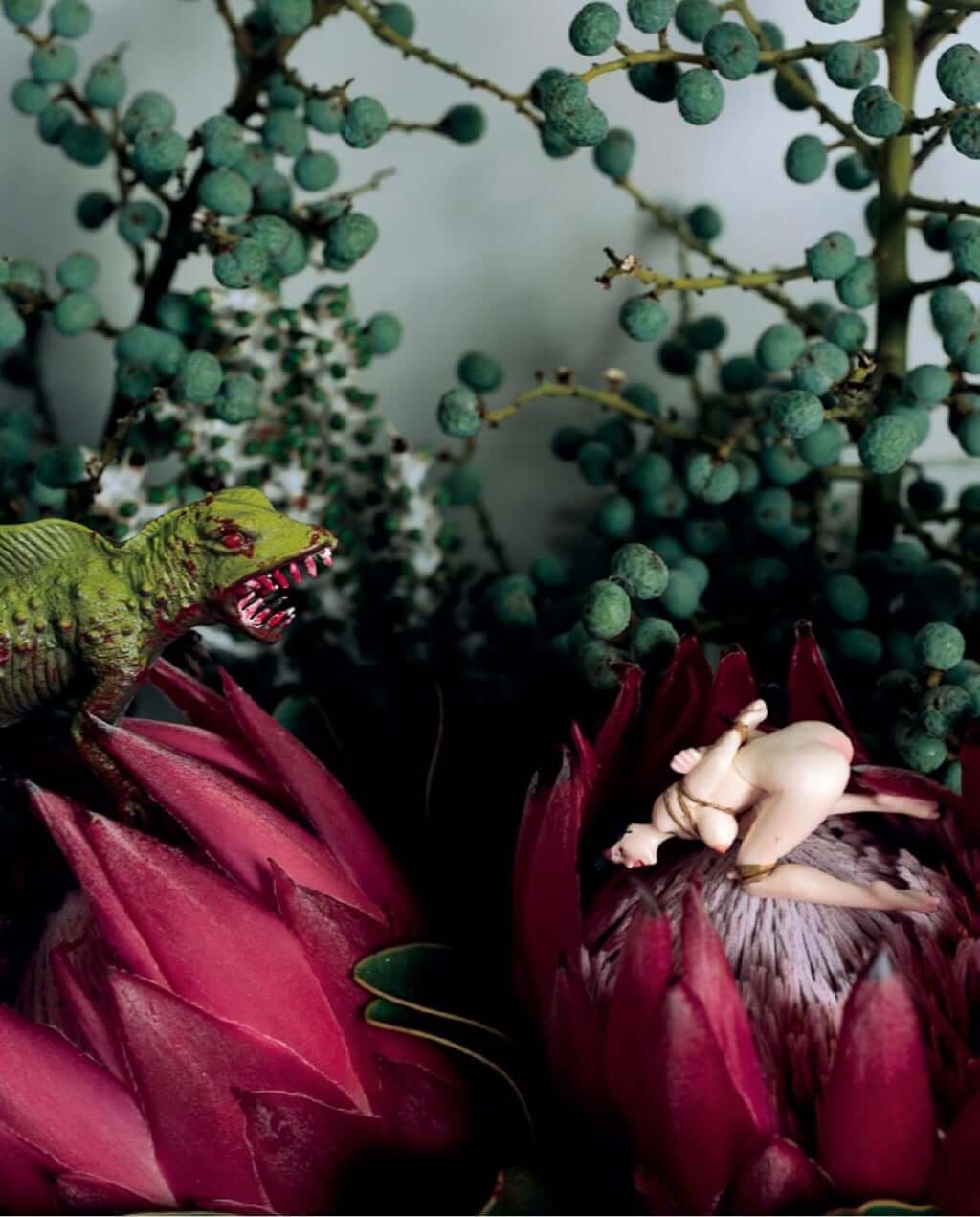 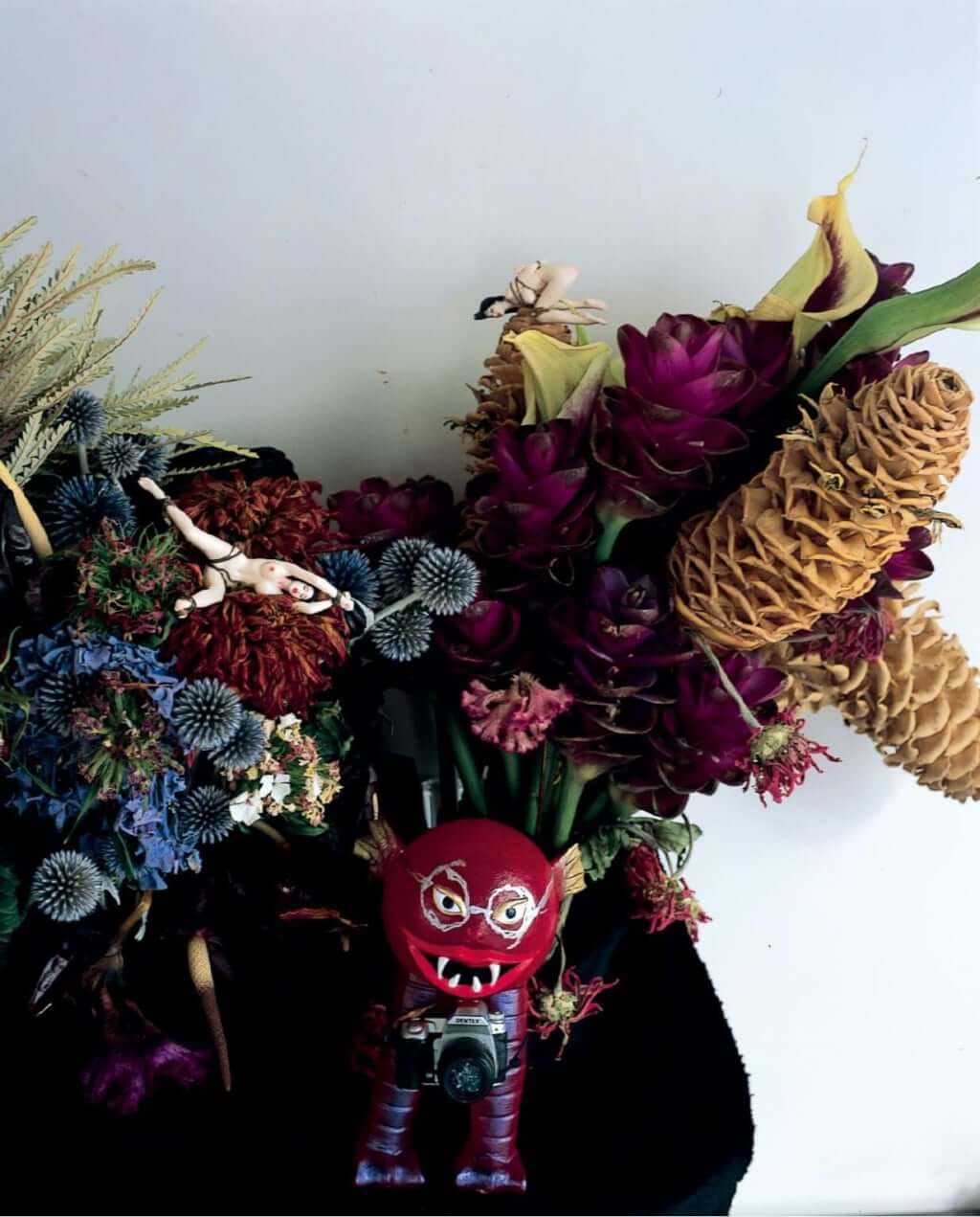 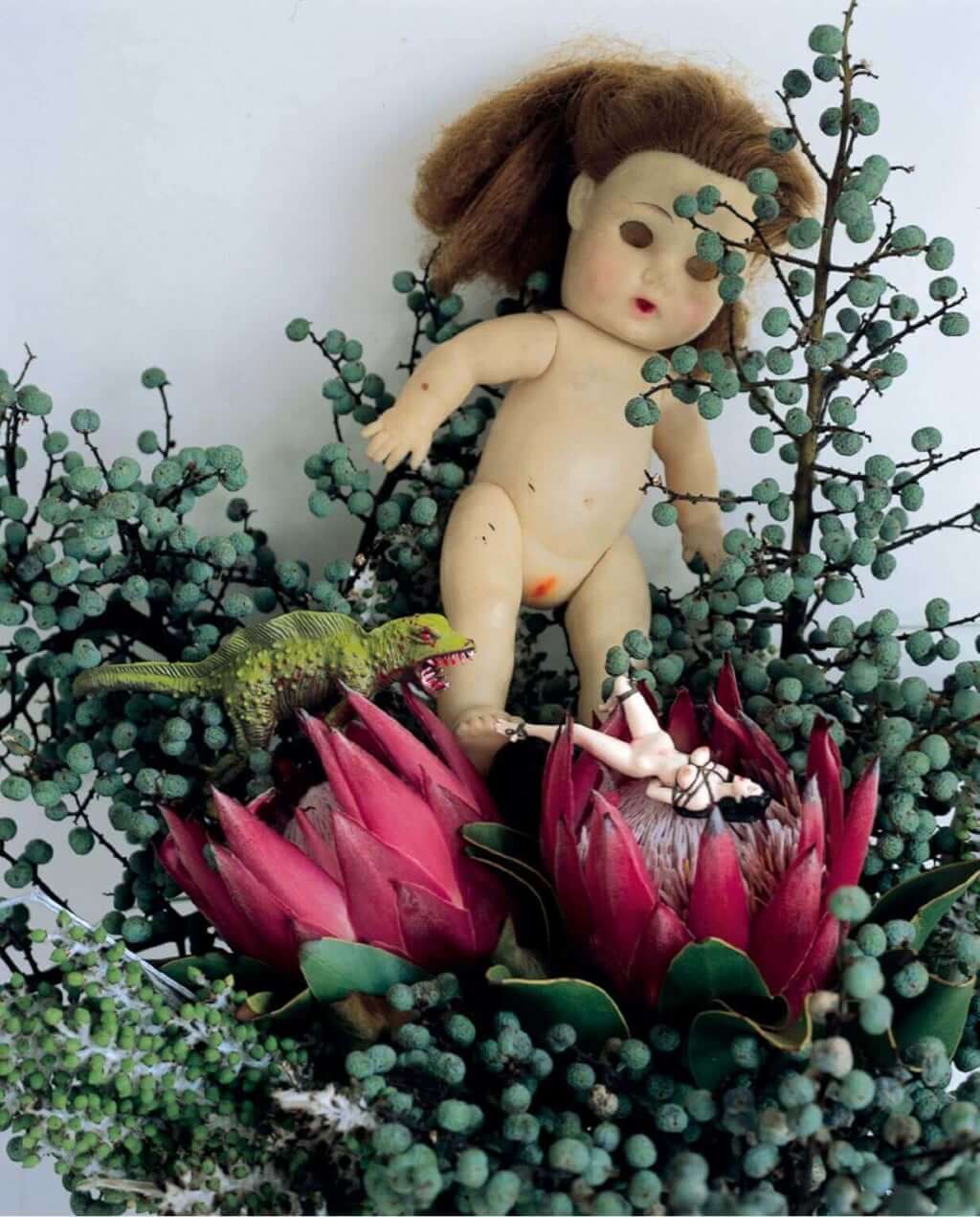 The Grave of My Right Eye

Niki de Saint Phalle’s relief work ‘Shooting Picture’, which she composed by shooting a rifle at bags of paint placed on the canvas, came to Tokyo in 2015. Araki, who is a fan, smashed his camera lens to pay homage to her and her work. The pictures from the broken camera capture what Araki sees through his blind eye. ‘It certainly feels like this. How strange’, Araki says. Dated 15 August, 2015, the anniversary of the end of World War II, the pictures represent Araki’s sense of Tokyo as a massive graveyard where buildings stand as tall gravestones. Araki draws the viewer into his half-blind world showing them that chance meets necessity in ‘The Grave of My Right Eye’. 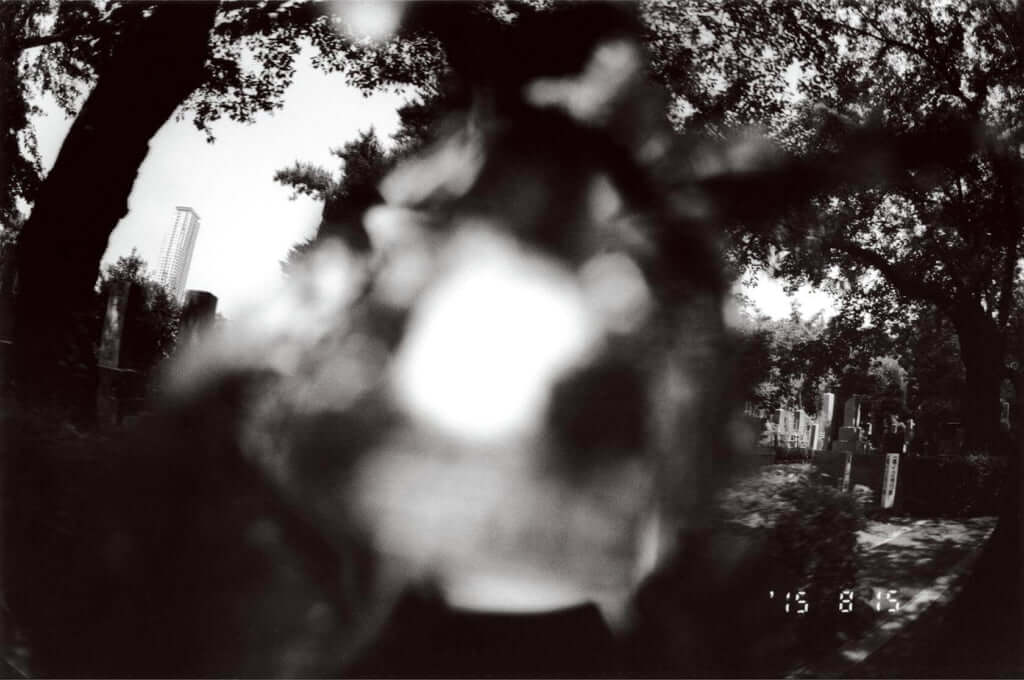 Araki has always had a fondness for polaroids. ‘Whatever I shoot makes me feel like a photographer, even when I don’t actually capture anything’, he says. In ‘Autumn for Art’, he paints acrylics over the surface of new, unexposed film. These un-taken photos come to life as miniature canvases. ‘Even I have no idea where the paint goes’. The paint runs and smears as intention and chance meet and mix. The photo mats are in various colours—not simply white, but also black, red, blue and green. We see that Araki has discovered huge potential in Polaroid films as a medium of expression. ‘They are very popular in Europe now, too’, Araki laughed with a delighted smile. 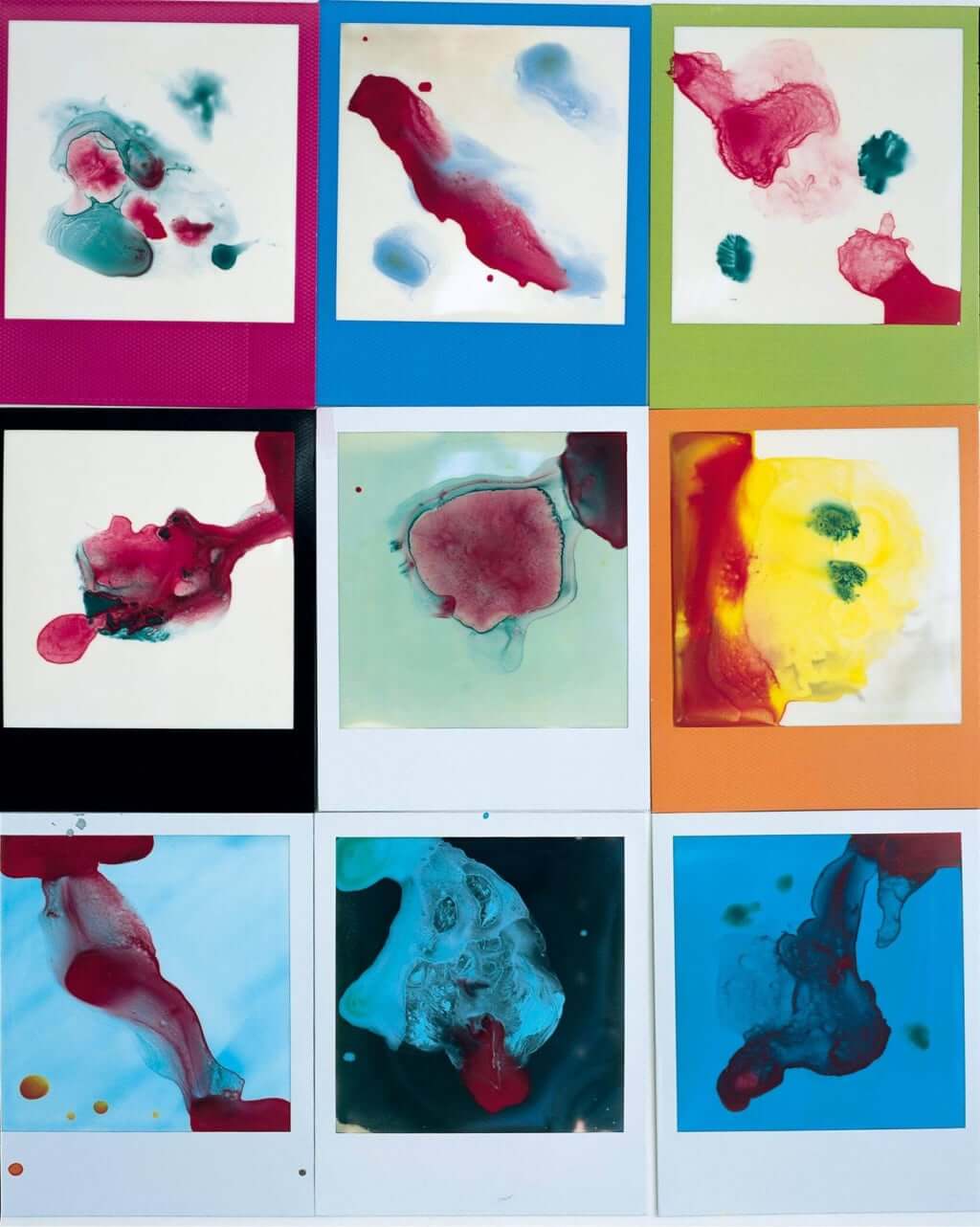 Araki snaps photos as others would write in a diary, and food is one of his primary subjects. Setting his camera on the table, he captures his breakfast. Hot spring eggs, his daily morning eating ritual, come to life as he adds a straight line to complete the shot. Emotions associated with the slow-boiled eggs change daily and from person to person. Some nearby flowers offer new fodder for creativity as he moves into his morning. ‘Flowers are most beautiful when they are about to wither’, he says as he patiently waits for the right moment to snap the shutter. Looking at his daily pictures arranged in a row, he mutters, ‘I eat a virgin every morning. This sequence shows their transition from virgins to mature women. Summer is naughty; it’s the season for love’. 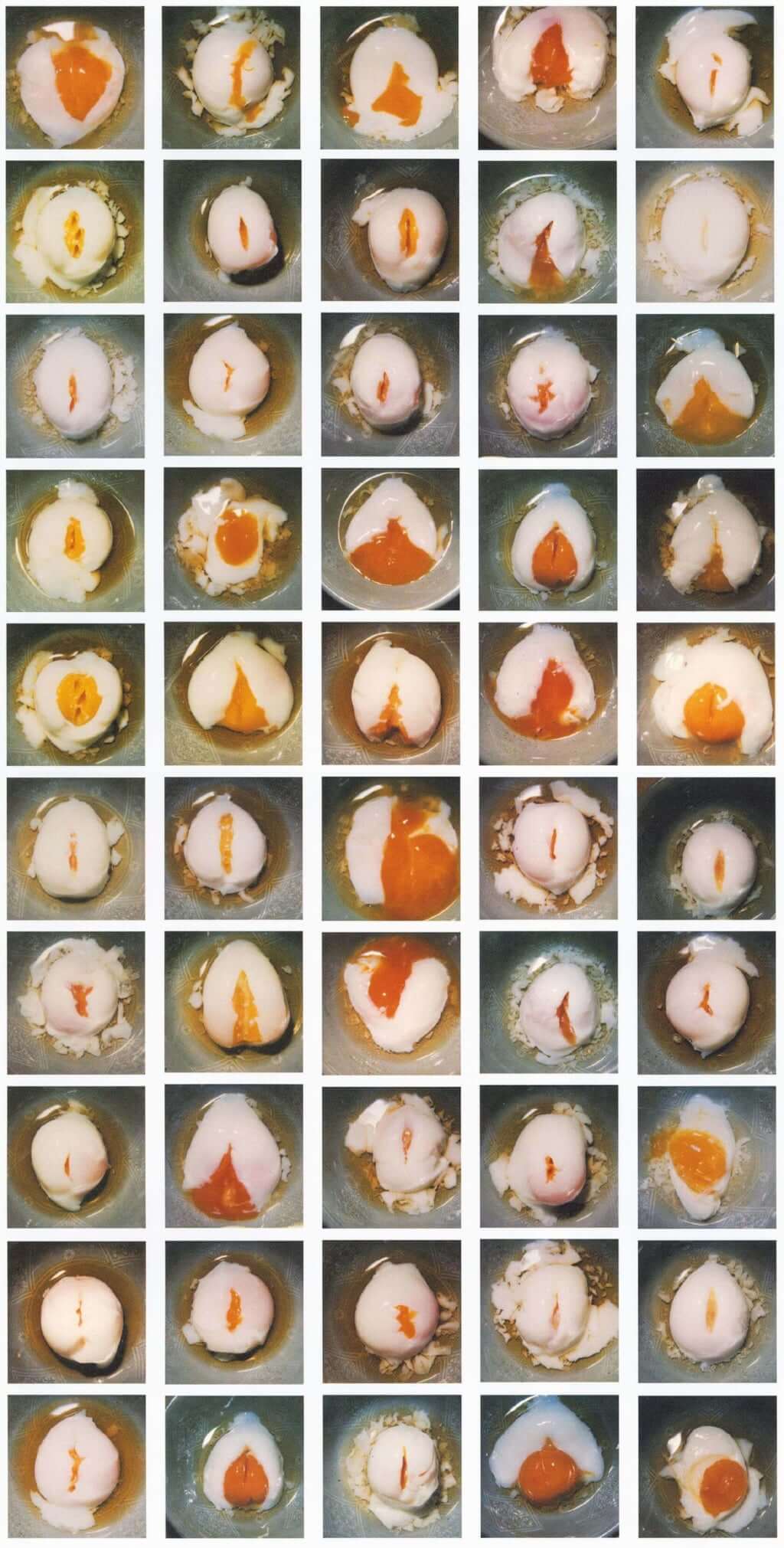 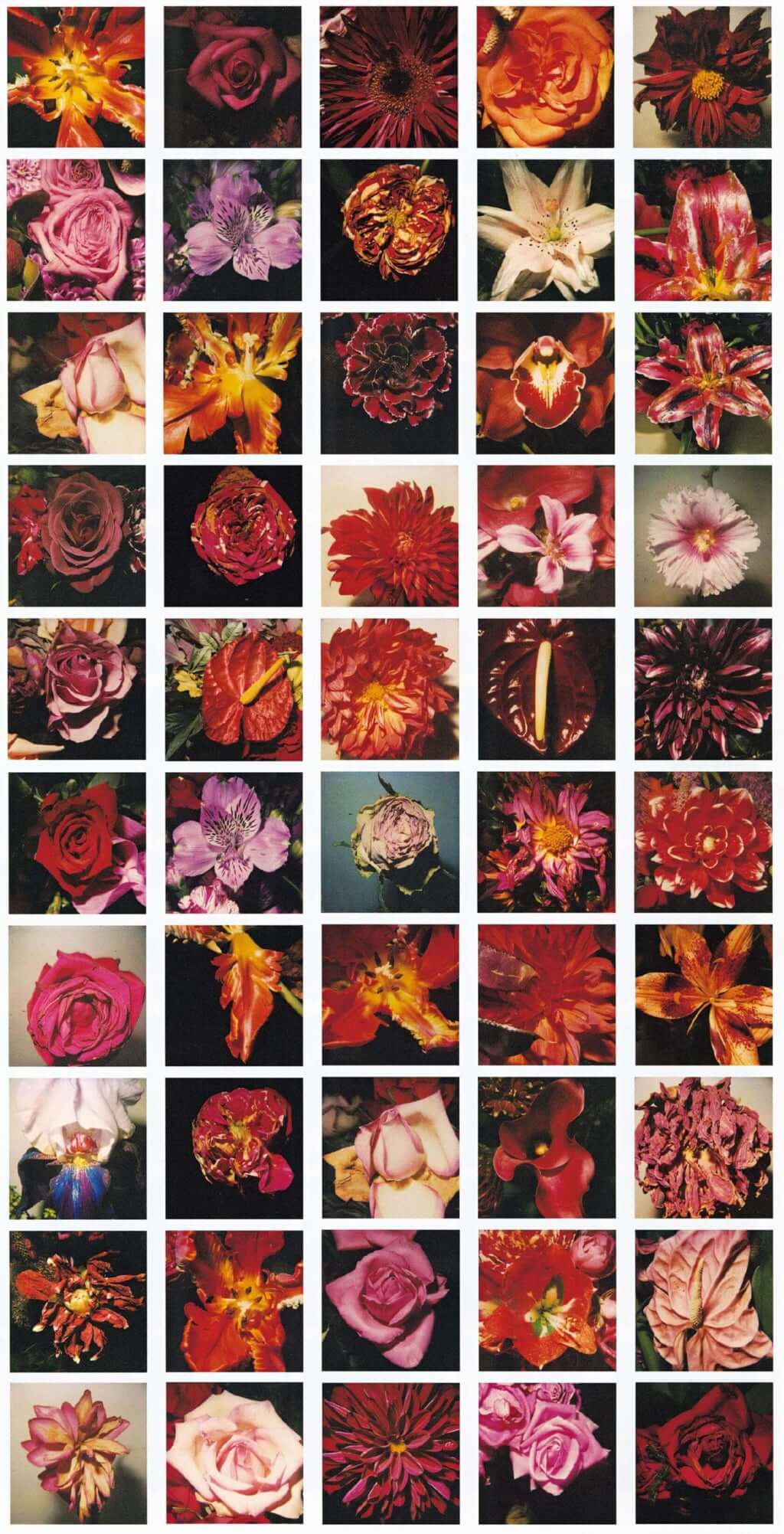 For over a half century, Madam Ikuko has lived as a geisha in Tokyo’s Akasaka district. Everyone who knows Akasaka knows of Madam Ikuko, who is the same age as Araki. Even heavy hitters in government and finance trust her, and she has yet to retire. Ikuko-san poses dignified with a fluttering smile, as Araki sets up his camera. The gap closes between them as if they were having a conversation, and in the frame Godzilla’s head and a dragon—Araki’s avatars—share the spotlight with the Madam. ‘Of course, I want to be in the photos myself’, Araki laughs, becoming one with his subject. The lives of his subjects interweave with Araki’s, through a great number of experiences. ‘Remember a man you loved long ago, come on! Can you turn to the left a bit?’ Araki asks. In that moment, the Red Devil and his subject unite, and the sound of Araki’s Pentax 67II shutter echoes in the empty space of the studio. 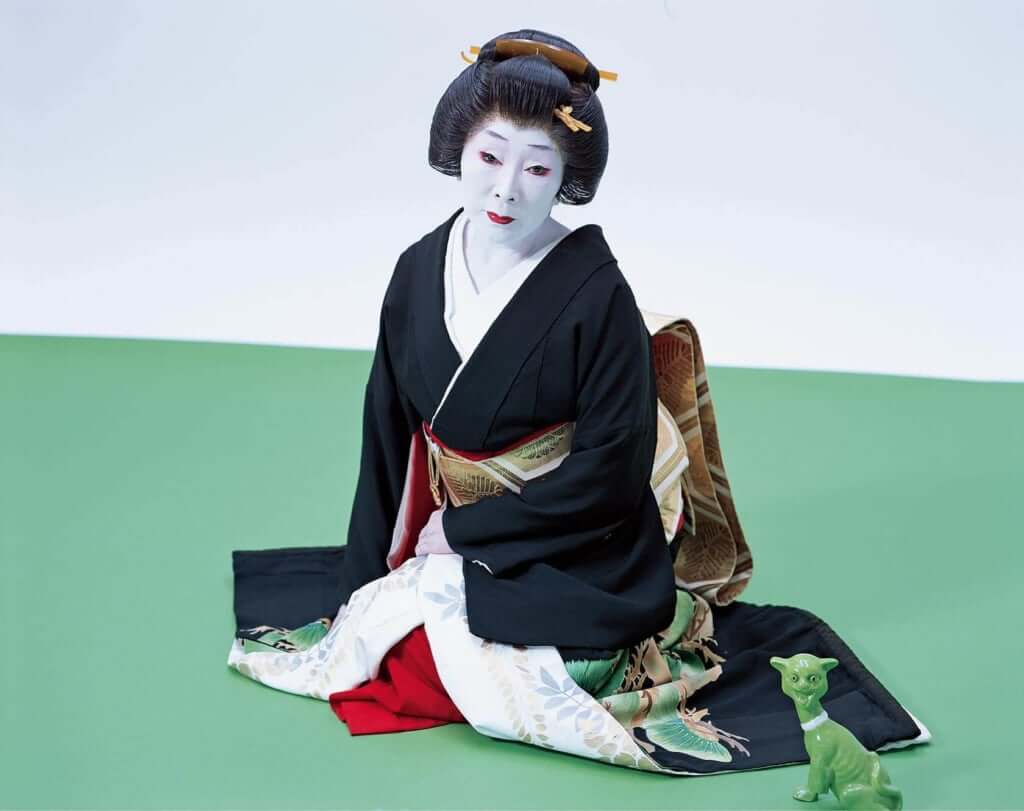 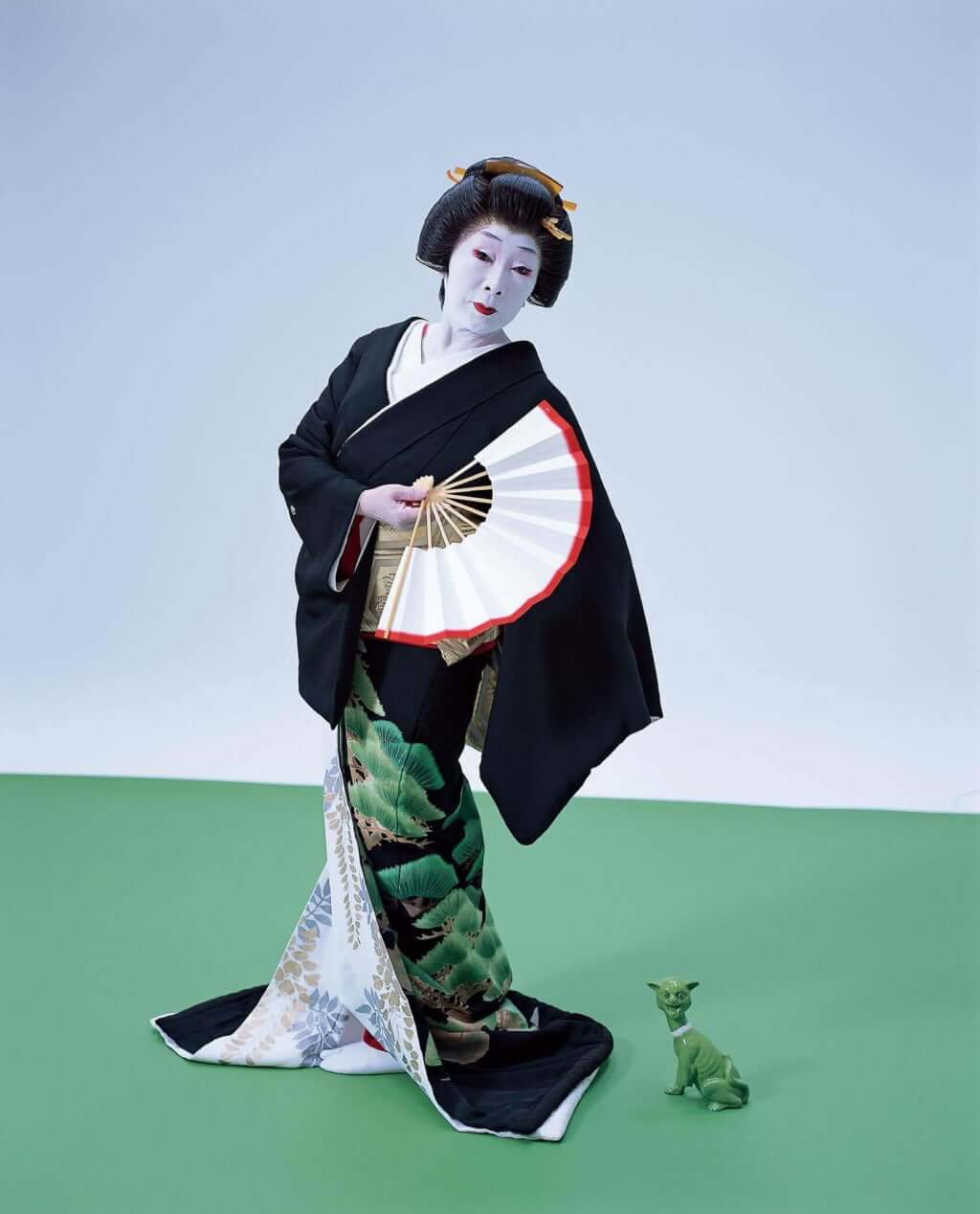 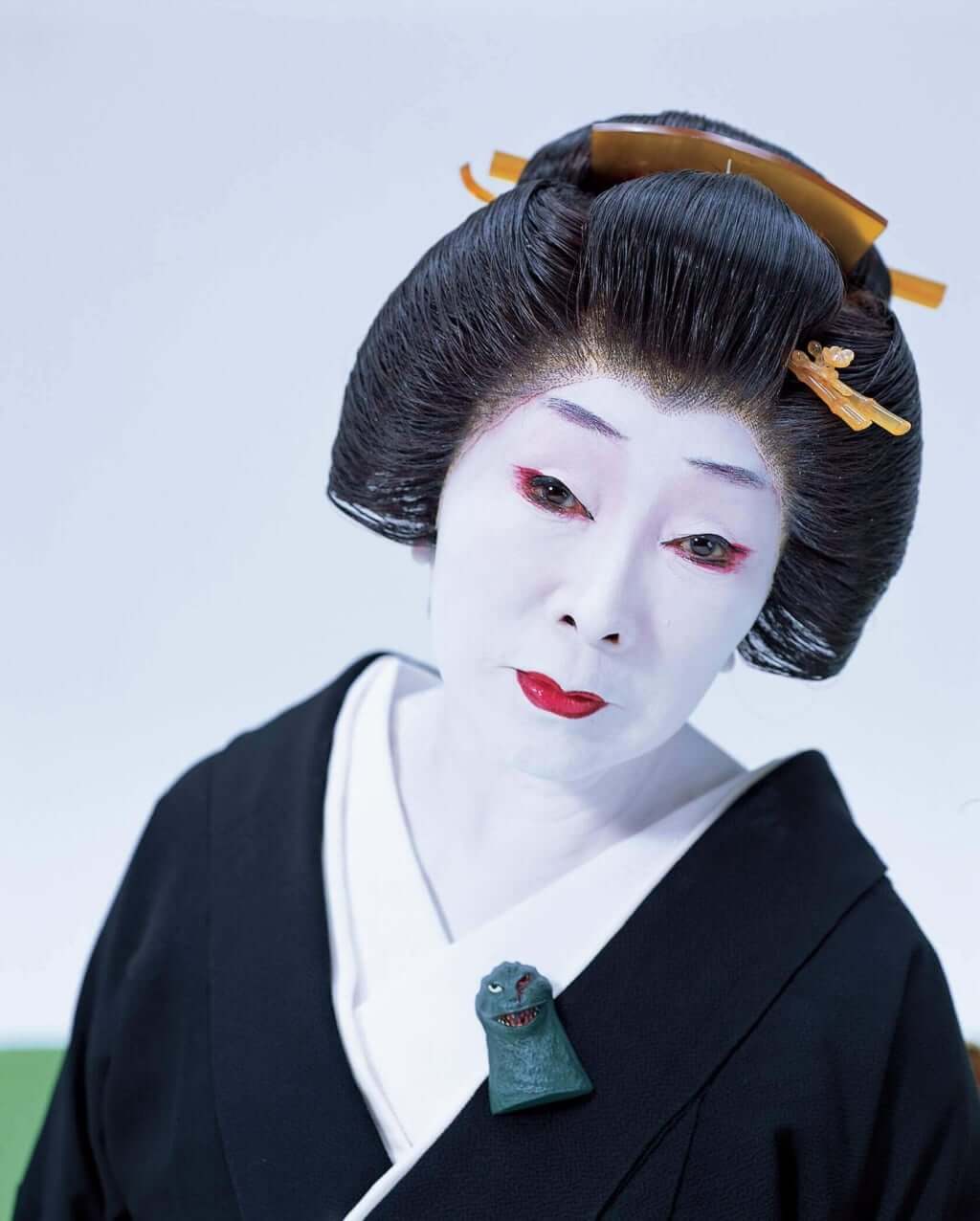 #06: His Latest Masterpieces are Shot Based on Five Themes