Interview: From Scrapbooks to Volumes

Somewhere in Tokyo we found a pile of old scrapbooks, which one could say were Araki’s origins. 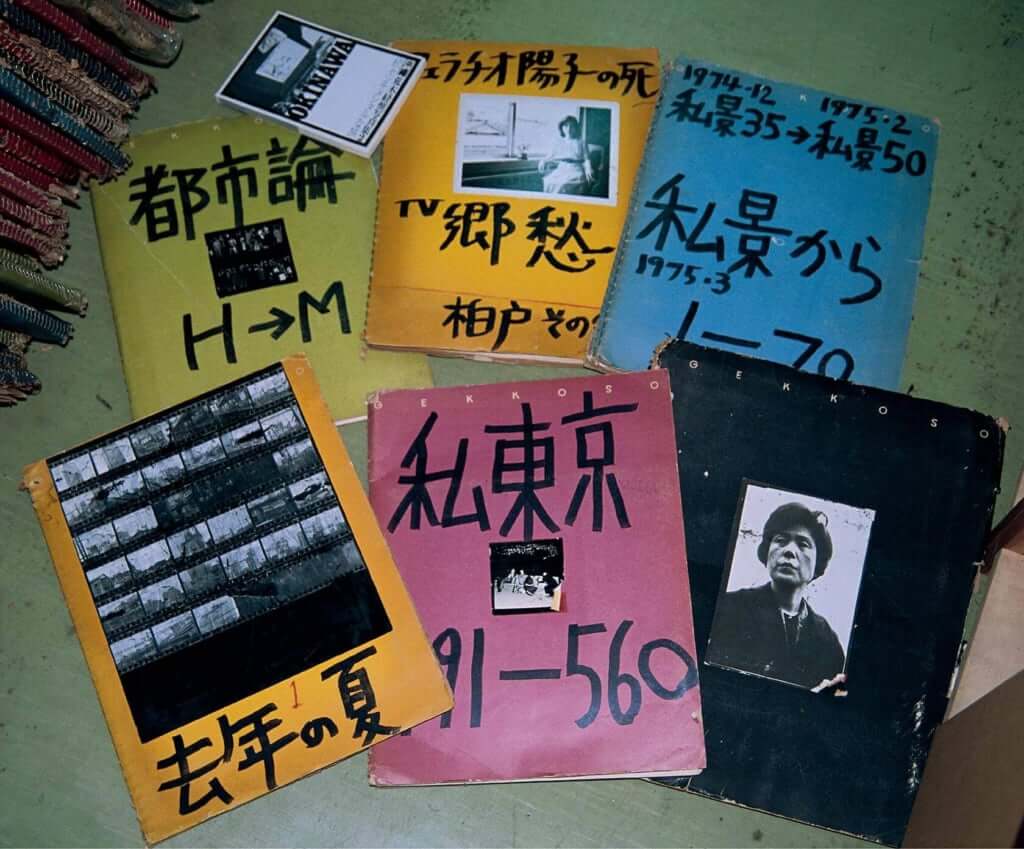 Some of the scrapbooks. In them can be found words such as 'last year', 'I' and 'death', which feature in the titles of his later works.

In 2012, Araki’s ‘Photobook Mania’ exhibited at the Izu Photo Studio. At that time, he had published a prolific 452 volumes. Since then, the total has risen to upward of 480.

‘It’s not enough for photography just to be taken. It must be displayed’, says Araki. He takes many of his photographs, assuming they will be seen by many people, but that is not true for the scrapbooks collected here.

‘How do you know about those scrapbooks? Don’t look at them. I’m hiding them. Leave them alone’. He guards them jealously.

Eventually, he took pictures of the scrapbook covers and sent them to us, confessing that they were collections from his time working with the ad agency, Dentsu. Contact sheets and prints, such as a picture from a pre-wedding trip to Nikko with his wife, Yoko, as well as photos of middle-aged women walking through Ginza pedestrian malls and snaps shot in Tokyo filled the volumes.

‘You can tell how young I was from the titles. I named one of them Theory of the City. I thought it was cool to use the word theory’.

We never saw what was inside the scrapbooks, but we were able to guess the content from books owned by the Setagaya Art Museum from the same period. He used a scrapbook he named Sacchin and Mabo to refine his plans for a solo exhibition that won the Sun Prize in 1964. Its pages contained black-and-white photographs of boys who lived near his boarding house—similar to his later work Sacchin.

Another book, Ginza, features portraits of Tokyo pedestrians from the Ginza area. He has arranged the portraits to emphasise contrasting expressions to tell a riveting visual narrative.

With over 100 scrapbooks under his belt since he began in the 1960s, Araki is a prolific artist. In 1970, he published 26 photographic works in a year, including his Xerox Photo Album, which he produced using a monochrome photocopier—cutting-edge for the time. The following year, he released full-color photo books such as Oh, Nippon (Miki Shuppan) and Sentimental Journey (self-published).

Among the numerous works he created while working at Dentsu, you can find traces of his trial-and-error process that led to his masterpieces.

‘I attached the photos pretty firmly with glue back then. Now, the pages are stuck together, so, instead of opening them gently, I have to pull as hard as I can. Some parts of the pictures get peeled off and become white, leaving random patterns, right? You know, that’s also good’, he laughs.

The Dentsu scrapbooks, where everything started, continue to evolve by their creator’s hand even now.

#03: Interview: From Scrapbooks to Volumes