Famous for being the home to numerous Buddhist temples, Mount Koya, a sacred site of Shingon Buddhism, celebrated its 1,200th anniversary in 2015. On this occasion, painter Hiroshi Senju was commissioned to create a work of art unlike any other, a fusuma-e of gigantic dimensions. 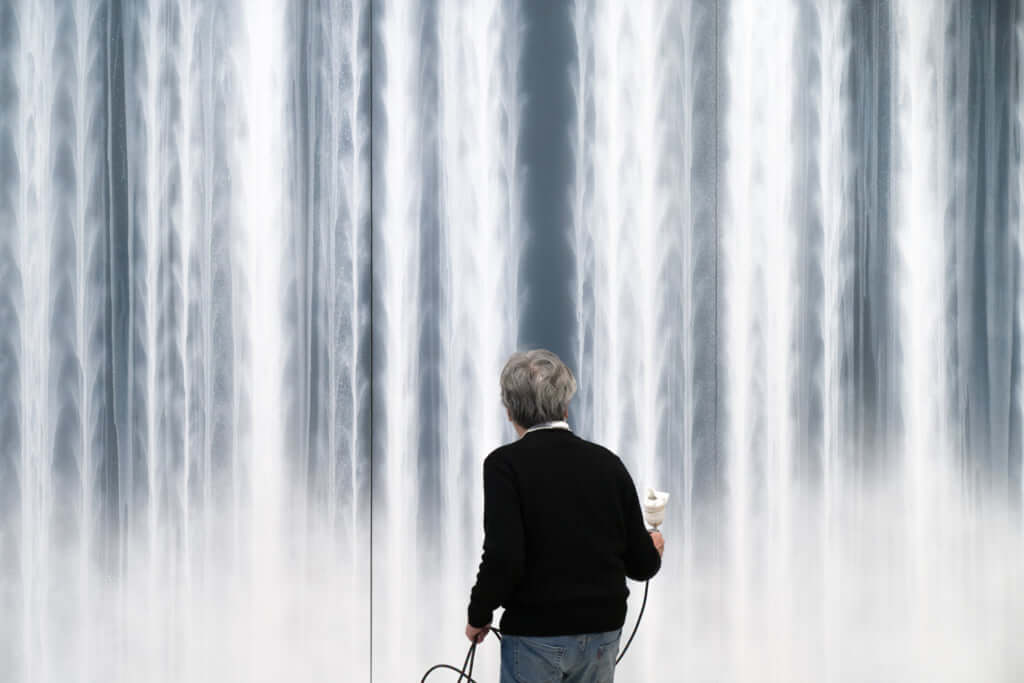 Vegetation hanging from the cliffs. Cascading and splashing torrents. A harsh but breathtakingly beautiful nature with overwhelming power. This is what can be seen in two series entitled Cliff and Waterfall. Representing a total of 44 wooden panels acting as dividing walls (fusuma) or alcoves (tokonoma), they are 16 and 25 metres in length, an unprecedented size for this genre. The creator of these monumental works is Hiroshi Senju, a world-renowned painter of Nihonga (Japanese style paintings). Both works are dedicated to the Kongobu-ji temple, one of the most famous sites in Mount Koya.

Mount Koya, located in the North of Wakayama Prefecture, is the stronghold of one of the most renowned Buddhist temple complexes in Japan. The mountain is also known as the heart of Shingon Buddhism, founded during the Heian period by Kukai, one of the most prominent figures in the history of Japanese Buddhism. At that time, the main doctrine taught that the Buddha state could only be achieved through reincarnation. Kukai, on the other hand, maintained that ‘we can all reach the kingdom of illumination, in this world, just like Buddha, and experience the awakening (satori) within our heart without ceasing to be ourselves’. A complete paradigm shift. These teachings spread out, and there is a persistent belief that Kukai is still living in Oku-no-in, a pavilion located in the depths of Mount Koya, where he continues to pray for world peace and human happiness. 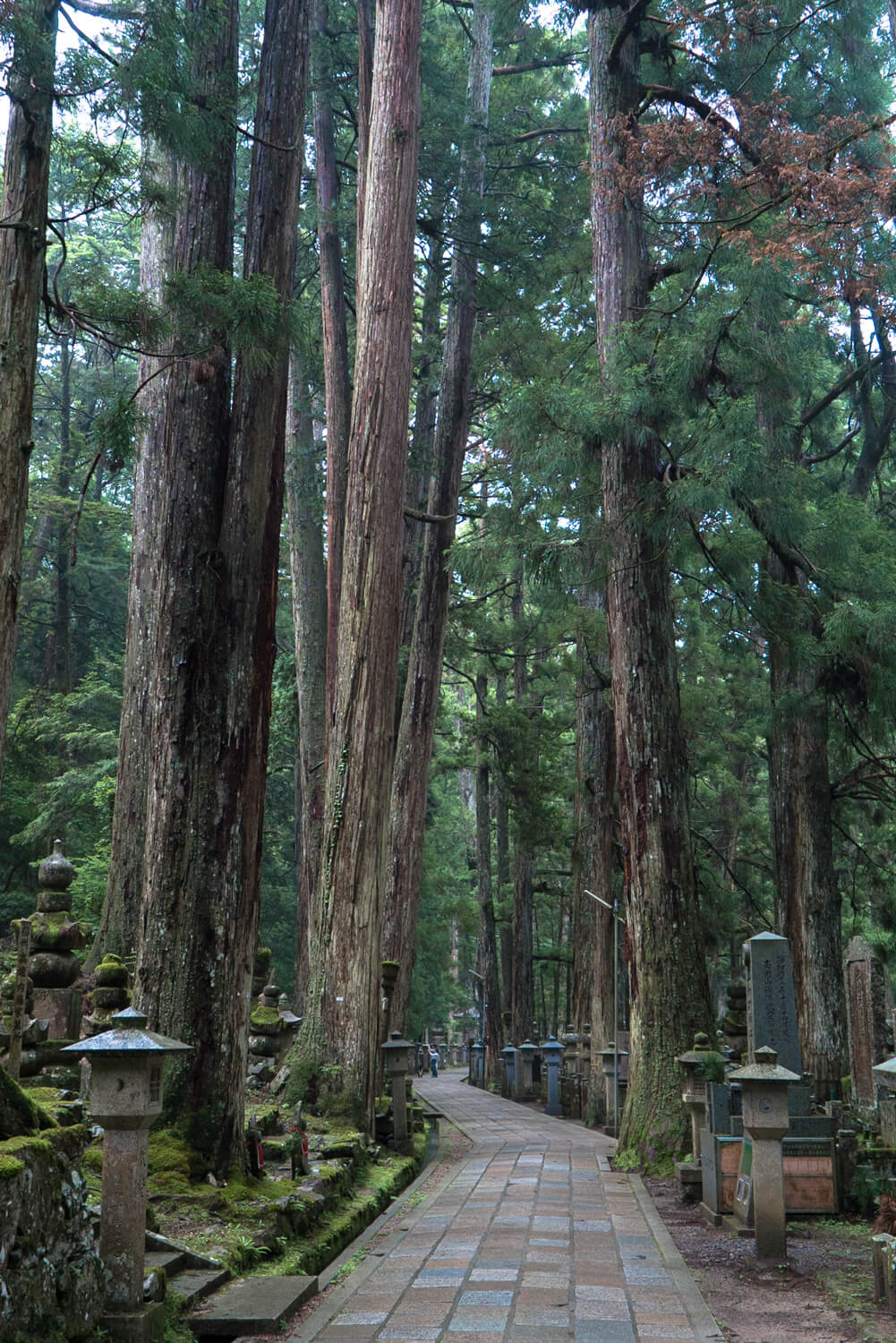 A gallery in a remote pavilion, lined with tombs.

In 2015, Mount Koya celebrated the 1,200th anniversary since its foundation. If the 117 temples on Mount Koya form an actual religious city, the heart of the complex is occupied by the Kongobu-ji. Hiroshi Senju’s fusuma-e are placed in the tearoom (cha no ma) and hearth room (irori no ma) of the temple’s main pavilion. Senju’s commission defined the theme that needed to be symbolically represented: the future of Mount Koya. After three years of efforts, Hiroshi Senju completed the work in 2018.

‘At the start, I proceeded by trial and error. My 40 years of experience as a painter could not help me in any way. It was more like a new beginning’. In order to create a work both original and accurate, Senju endeavoured to walk along the paths that Kukai had taken, to observe the landscapes that Kukai had contemplated, to read the books that Kukai had written, in short, to understand as much as possible the man that Kukai was. Yet, when he went to Cape Muroto, in the current Kochi Prefecture, where Kukai experienced his satori, he was struck by the ordinary aspect of the site, far from the spectacular landscapes he had envisioned.

‘Paradoxically, this is what impressed the most, the fact that Kukai was able to achieve his awakening in the most common of places. Originality is nothing, what is necessary is to reject one’s ego, and go forward with the intention of turning oneself into a painting.’ 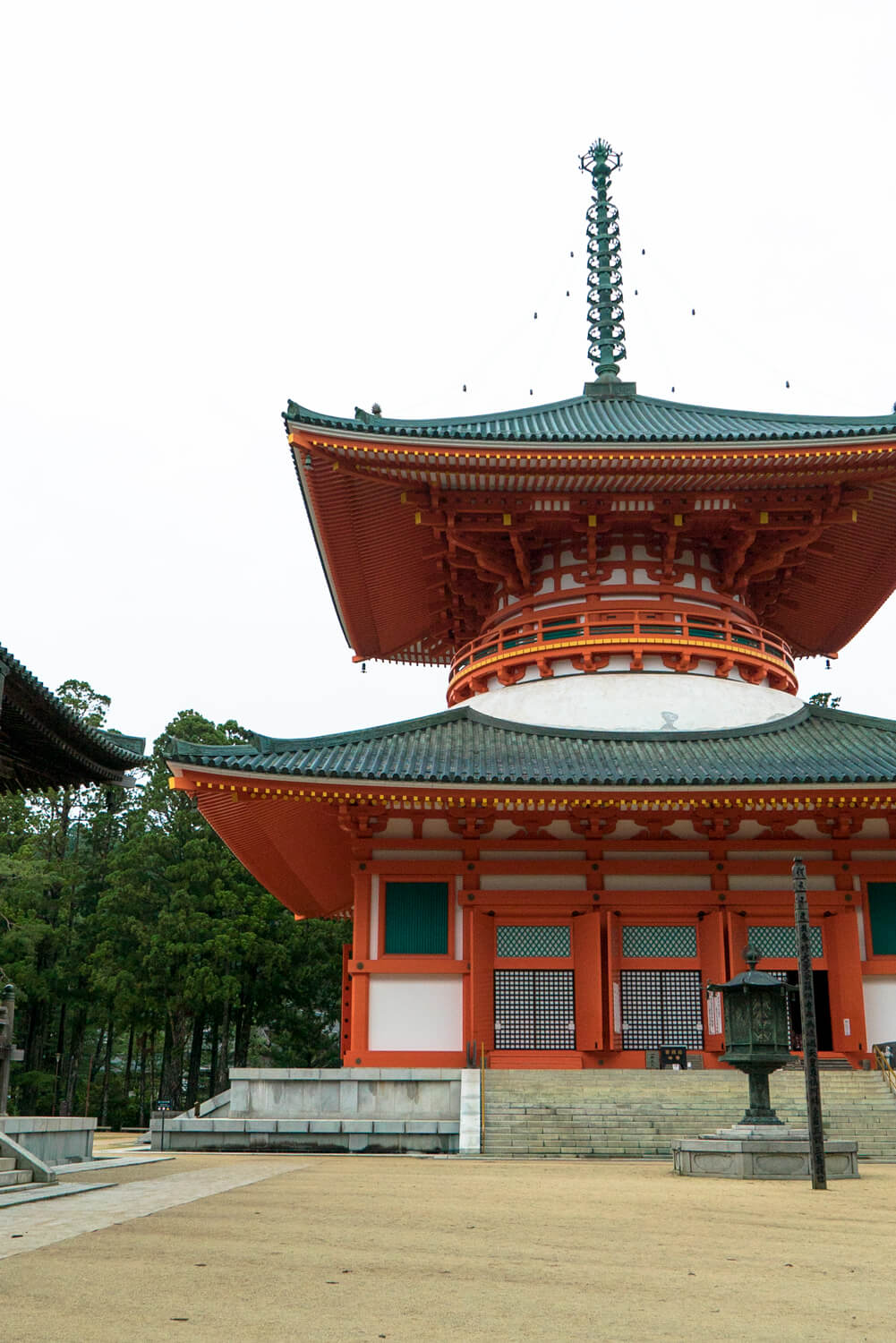 The Konpon Daito pagoda symbolises the teachings of the Shingon Buddhist school of Mount Koya.

There, Senju felt he was the recipient of an essential message, coherent with the teachings of Kukai. In the series entitled Cliff, the rocky cliffs were made from crumbled Japanese mulberry paper and pouring natural pigment. For the series entitled Waterfall, the depiction of the waterfall was produced by pouring water on vertically placed panels before adding natural white pigment and letting the pigment freely follow the course of the water.

‘Mount Koya welcomes people with all sorts of struggles and questions. I wanted my painting to be close to these people. To do that, I immersed myself in my work without letting my ego intervene’.

The evidence of Senju’s approach can also be found in the choice of the materials. All the materials he used are natural, and are the fruit of the Japanese climate and environment: the Japanese mulberry paper is made from plant fibres such as kozo or mitsumata; the natural pigments are made from mineral rocks; the white pigment is made from gofun; which is pulverised oyster shells.

‘I wanted to extract from matter something that is a record of life’, says Senju. It is not impossible that Senju became receptive to the Buddhist teaching according to which every living being possesses the nature of a Buddha. 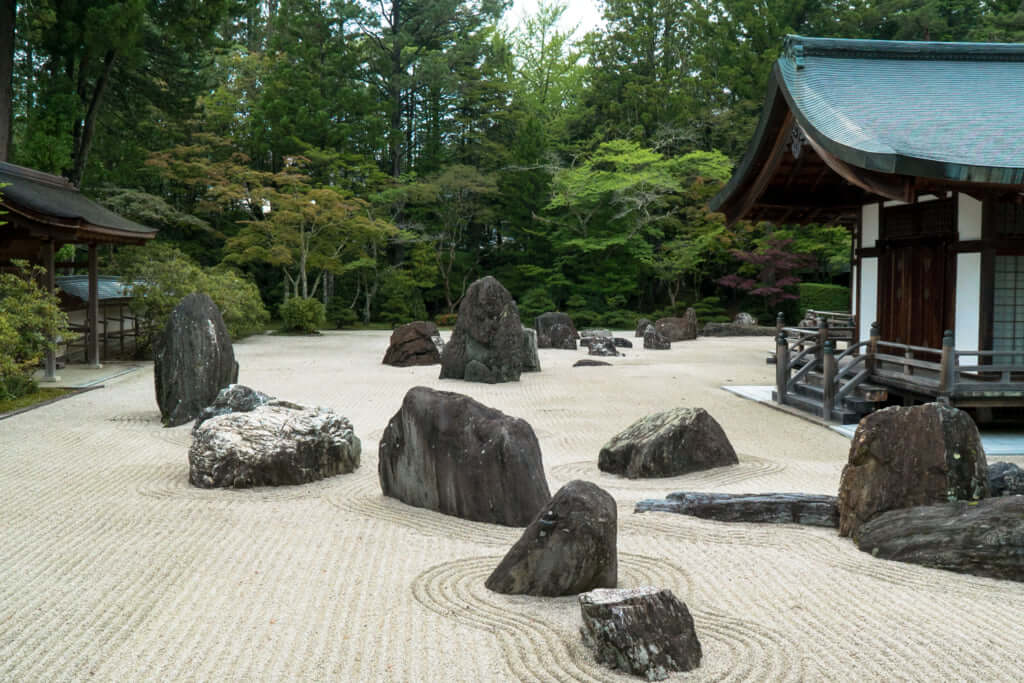 The Banryutei of Kongobu-ji, the largest rock garden in Japan.

Fusuma-e that completely cover the walls respect the global spatial balance. Although they are both monochromes, the works do not feature the same colour shade. For the Cliff series, displayed in the tearoom on the black lacquered structural beams, Senju used a blue mineral pigment that he burned until it turned almost black. For the Waterfall series, in the hearth room, he stopped burning the blue pigment slightly sooner, on a ‘blue-grey’ tone, so that the colour could match the ‘burgundy-red’ of the room pillars.

In autumn 2020, once the paintings are officially dedicated to the Kongobu-ji, after having travelled throughout museums in Japan, they will be accessible to the public: they can then finally reveal themselves under the unique light of this sacred site of serenity. 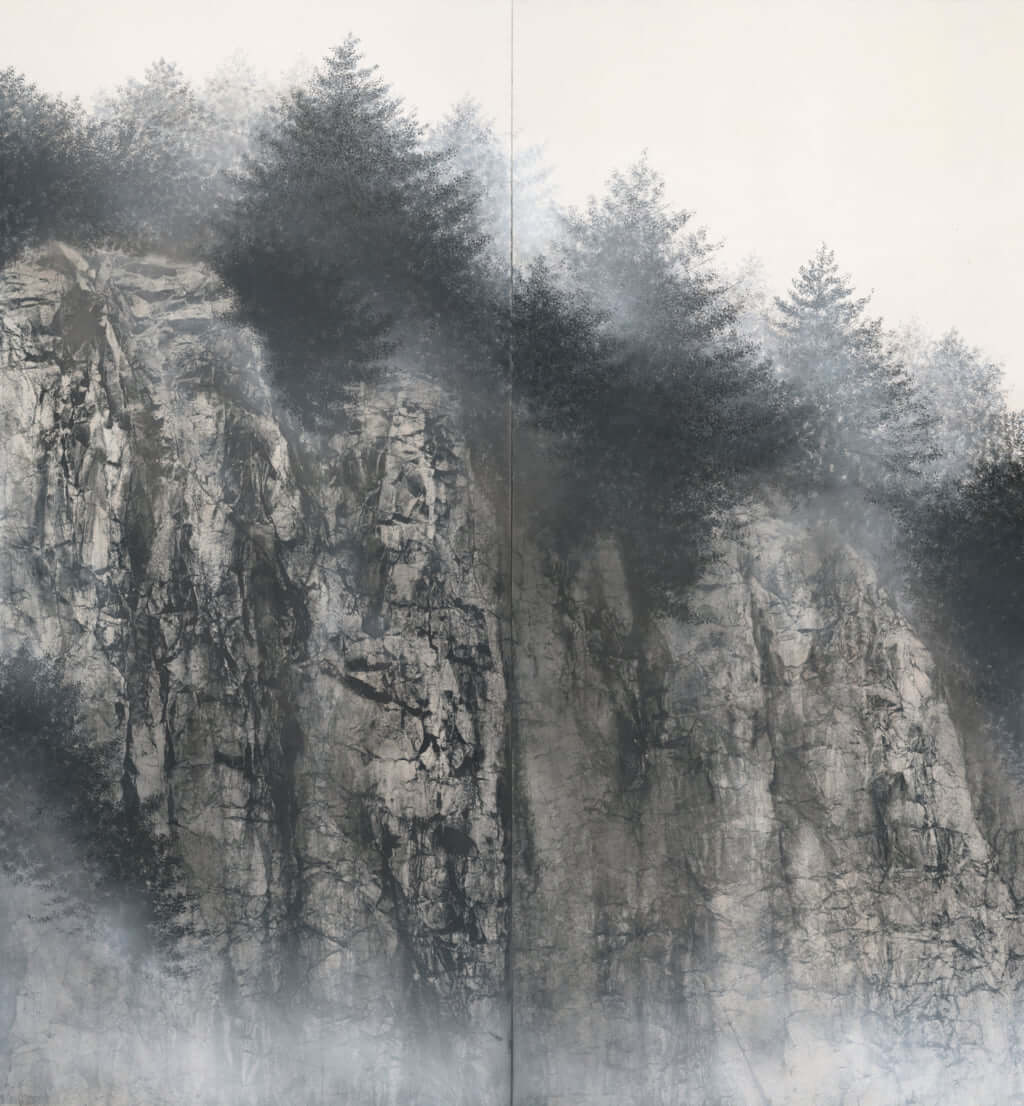 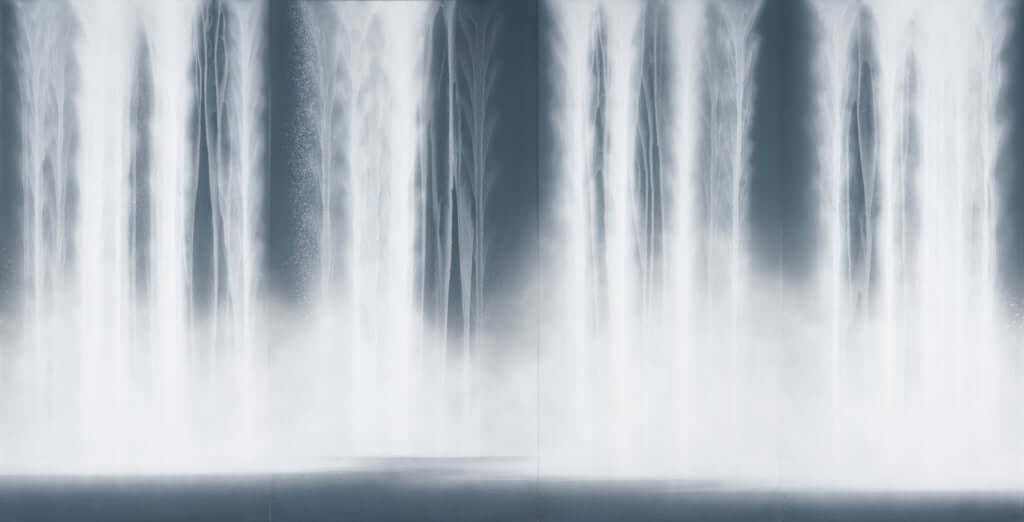 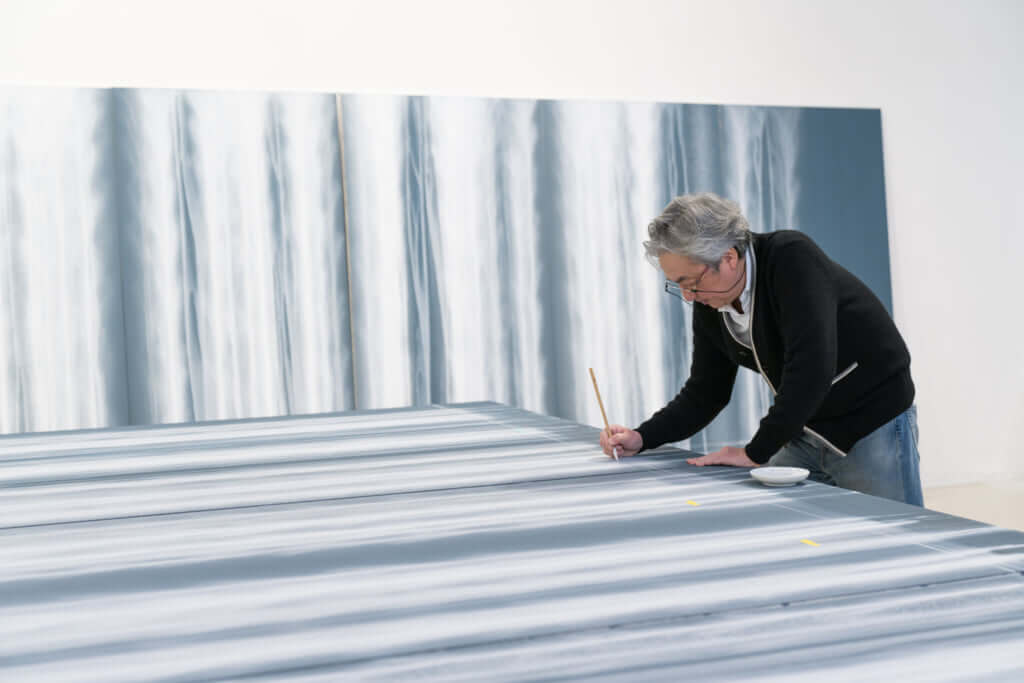 Born in Tokyo in 1958, Hiroshi Senju is a Nihonga-style painter who graduated from Tokyo University of the Arts in 1987. In 1995, he became the first Asian artist to receive an Honourable Mention Award at the Venice Biennale. His works are included in the permanent collection of the Los Angeles County Museum of Art and Metropolitan Museum. Hiroshi Senju received the Isamu Noguchi Award and numerous other distinctions. He is currently a professor at the Kyoto University of Art and Design.