The American chef revisits traditional Japanese kabayaki eels by modifying the main ingredient, adding his own twist to the recipe.

In Japan, eels are most often eaten sliced and assembled on skewers, then brushed with a sweet soy sauce glaze and grilled. In his book JapanEasy, chef Tim Anderson reinterprets this dish, known as kabayaki, with mackerel as the main ingredient, as eels are not so easy to source in Europe.

For all the recipes in the book, the chef has made sure that all the ingredients are those that are easy to find in the majority of western supermarkets. He has also developed his recipes based on seven key ingredients: soy sauce, rice vinegar, mirin, sake, miso, dashi, and rice.

Oil, to grease the tray

Half a lemon, cut into quarters, to serve

Sansho pepper (Japanese pepper with a citrus flavour and ending with a very peppery note) or shichimi togarashi to serve (optional).

Using a sharp knife, make cuts in both sides of the mackerel so the glaze soaks into the flesh. Lightly oil a baking tray and place the mackerel on it with the spring onions down the side. Pour the sweet soy sauce generously over the fish, then put the tray on the oven rack closest to the hot grill. Add a layer of glaze roughly every minute. When the mackerel skin has browned nicely and has blackened in places, turn it over and repeat on the other side. If the spring onions start to burn, remove them.

When this side has also turned a nice brown colour, check that the fish is cooked by looking inside it. If the flesh closest to the central bone is white or grey, the mackerel is cooked. To serve, add a final layer of sweet soy sauce, sprinkle with sansho pepper or shichimi and garnish with lemon quarters.

JapanEasy (2017) is a book written by Tim Anderson published by Hardie Grant. 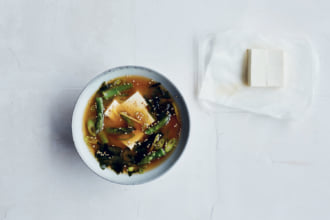 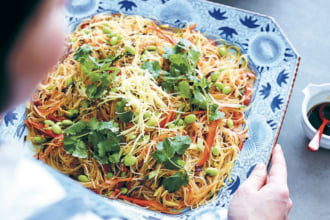 Harusame Salad with Summer Vegetables by Meg and Zenta Tanaka