These crispy vegan snacks can be eaten as a main course or served as an accompaniment to a soup or a salad. 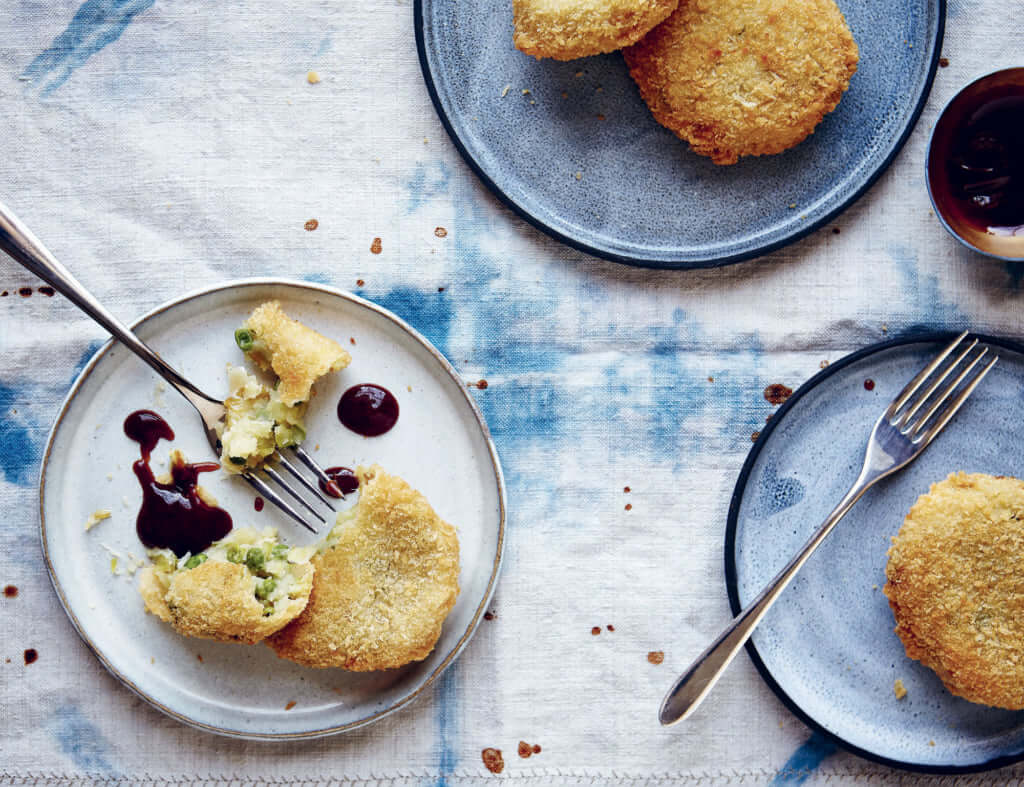 In his book Vegan JapanEasy, Tim Anderson has compiled 80 Japanese recipes that contain no animal products. All of them have been created using a base of seven products that are easy to find in western supermarkets.

He shares his recipe for sweetcorn curry croquettes, drawing inspiration from the Japanese snack named ‘curry bread’, which is in fact a doughnut filled with Japanese curry. But, as the chef explains, while the doughnut makes it possible to eat a curry in one mouthful, the execution of the recipe proves a little more complex.

‘This recipe is nice, but it’s a bit tricky for a book called Vegan JapanEasy (maybe my next book will be called Vegan Japanslightlymoredifficult), so here’s an alternative: curry croquettes, which are perhaps even better because they’re more crunchy on the outside.’

Tim Anderson is a curry enthusiast, and this is clearly expressed in his recipes, with one for curry roux, the key ingredient for making curry, and another for curry rice, one of the most popular dishes in Japan.

Boil the potatoes until fork-tender, 10–15 minutes, then drain and leave to cool slightly.

Meanwhile, saute the onions and chilli in the oil over a medium-high heat until they soften, then add the corn and continue to cook for several minutes until everything starts to brown a bit.

Add the spices and cook for another few minutes to make a thick paste, then remove from the heat.

Mash the potatoes and stir in the onion-cornspice mixture, and add a generous amount of salt.

When the mash is cool enough to handle, divide it into 16 equal balls and then squash each ball into a kind of oblong patty shape.

Lay the potato patties out on baking sheets lined with foil and transfer to the freezer to firm up for about 30 minutes.

At this point the croquettes can be frozen on the baking sheets, or cooked straight away. (The cooking process is the same from frozen or chilled.)

Remove with a slotted spoon, drain on a wire rack and keep hot in the oven with its door slightly open, until ready to serve.

Pour enough oil into a non-stick, flat-bottomed frying pan (skillet) to come up to a depth of 5 mm and place over a medium-high heat.

Carefully lower in the croquettes and fry on each side for about five minutes, until golden brown.

Transfer the par-fried croquettes to a baking sheet and bake in the oven for 15–20 minutes, until a thin knife inserted into the middle of a croquette comes out feeling hot to the touch.

Tim Anderson is an American chef who won the 2011 series of MasterChef UK. Having graduated in 2006 from Occidental College in Los Angeles, where he studied the history of Japanese cuisine, he then lived in Japan for two years, in Fukuoka.