In this film based on social criticism, director Satoshi Kon depicts a trio of homeless people who must face up to their responsibilities. 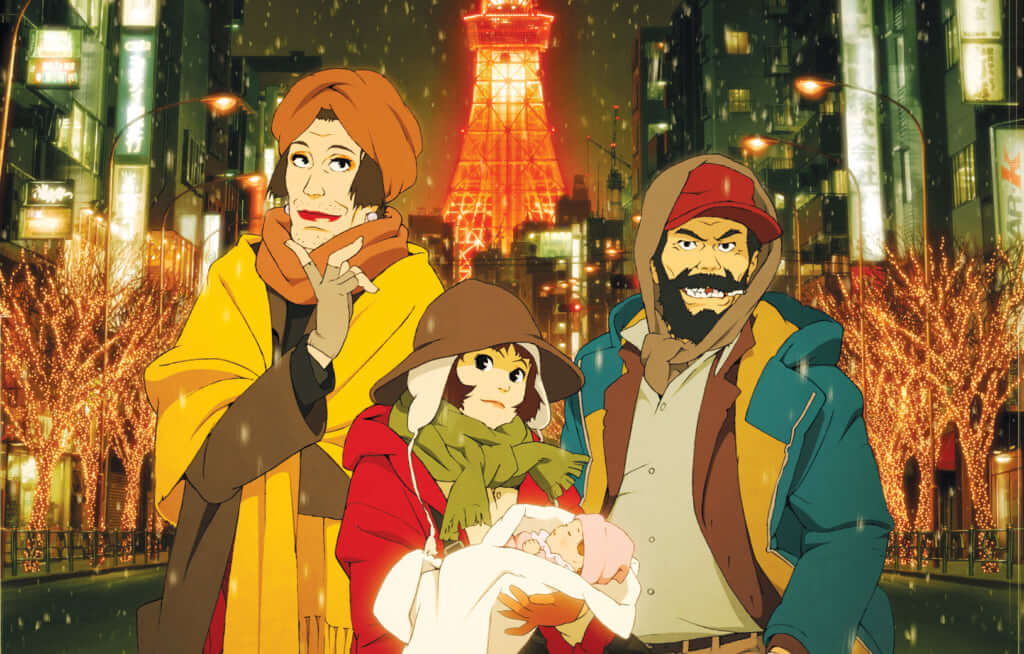 Gin, an alcoholic with his life in ruins, Hana, a transgender woman and Miyuki, a teenage runaway, play the anti-heroes in the third animated film by Satoshi Kon, Tokyo Godfathers (2003). On Christmas Eve, the three eccentric protagonists find a newborn baby in a heap of rubbish and name her Kiyoko (‘pure child’ in Japanese). Following this chance encounter, they decide to go looking for the baby’s biological mother. This marks the beginning of their journey over several days through the snowy Tokyo streets.

After Perfect Blue (1997) and Millenium Actress (2001), the Japanese filmmaker directed a comedy inspired by the western 3 Godfathers by John Ford (1948). Despite a lack of success when it was released in cinemas, the feature film was named Best Animation Film at the Mainichi Film Awards that same year.

An adventure in Tokyo

With a meticulous eye for detail, Satoshi Kon allows the viewer to discover Tokyo in a realistic manner. The capital even becomes a character in the film in its own right. Thus, in certain scenes, the city appears to take on an animistic quality. The air conditioning units and windows become eyes or mouths to watch over and protect the trio over the course of the film.

On this fast-paced urban voyage, their status as pariahs is revealed. Thrown out of supermarkets, beaten up by young men, looked down upon on public transport… The viewer witnesses social injustice, presented in a relatively flippant manner. The filmmaker did not want to depict marginalised people as weak or wretched individuals. His aim was to ‘examine how someone separated from mainstream society [could] once again rejuvenate society’, as he explained in an interview with AnimeNewsNetwork.

The magic of Christmas

In this tale with a festive ambiance, Satoshi Kon combines reality and fiction. Surreal events occur to move the plot along. This echoes the holiday period, which is synonymous with miracles. Nevertheless, the narrative is full of twists and turns and always remains convincing to the viewer.

This combination of circumstances in which memories and illusions are intertwined also allows the characters to come to terms with their respective pasts. Along the way, the quest to find Kiyoko’s parents offers the group an opportunity to repent and find redemption and forgiveness. The three endearing anti-heroes, who have lost not only their homes but also their families, forge a strong relationship and project a new image of a happy family. To Satoshi Kon, Tokyo Godfathers portrays the restoration of family relationships because ‘happiness is a process of recovery’, as he declared to Kon’s Tone.

Tokyo Godfathers (2003), a film directed by Satoshi Kon and distributed by Sony Pictures. 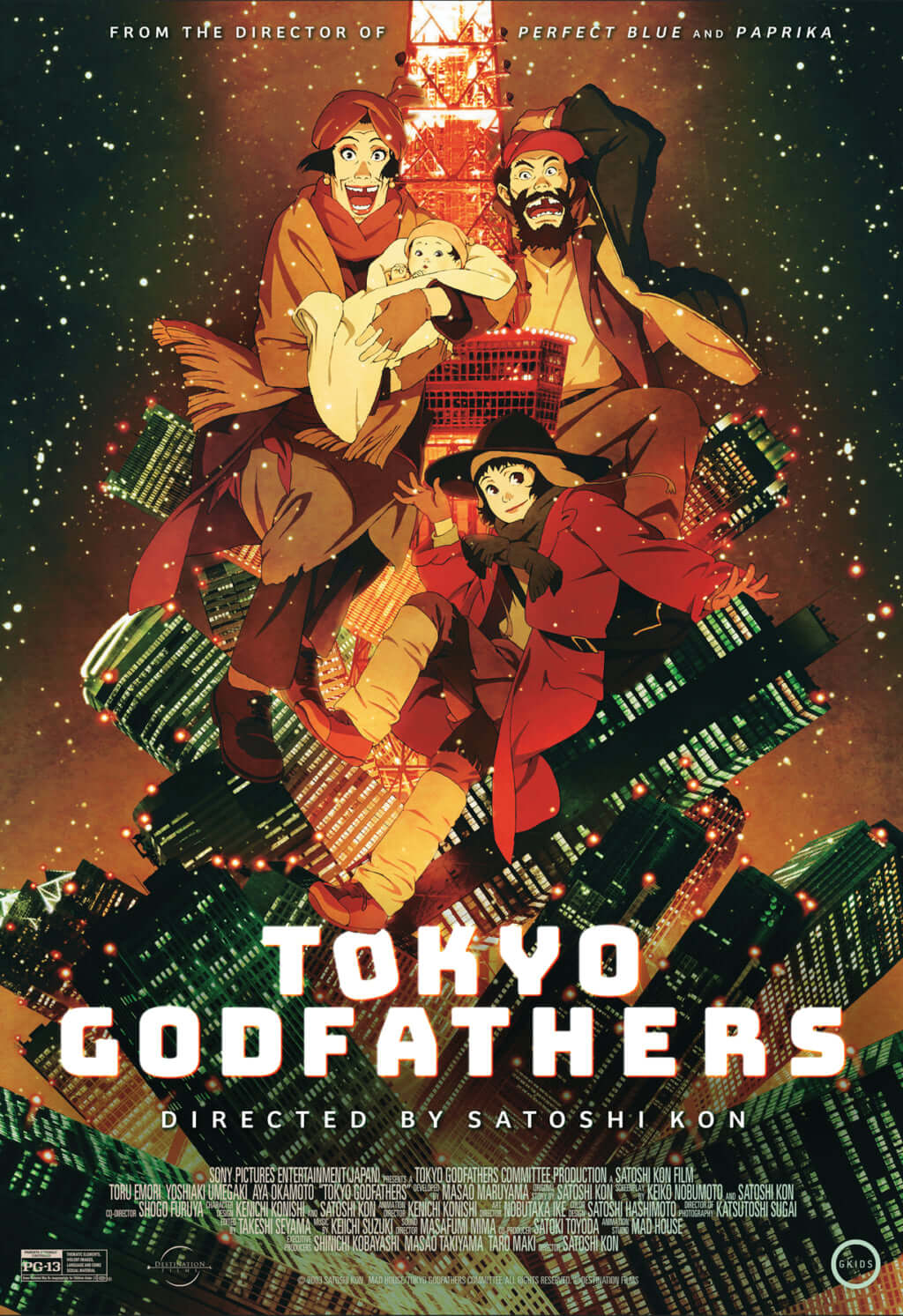 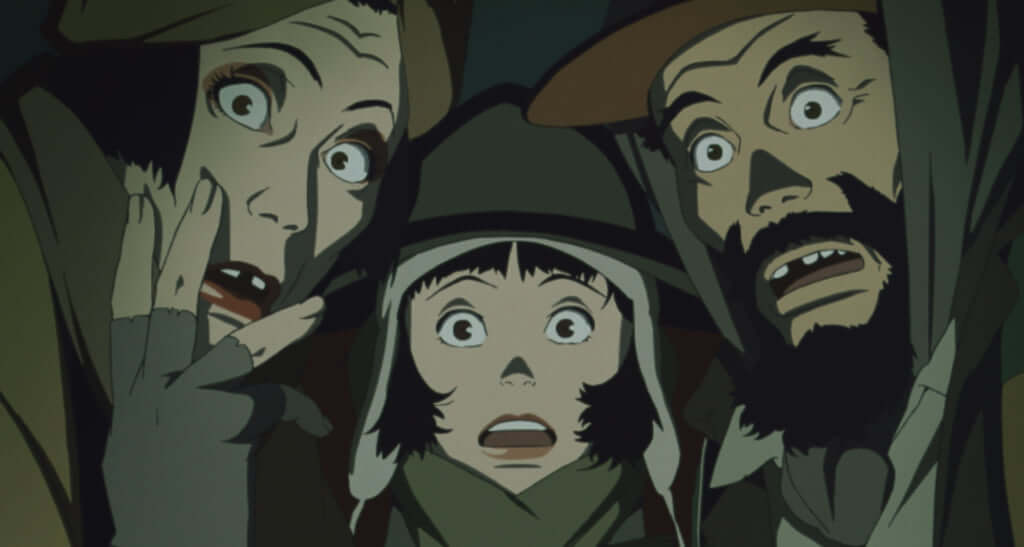 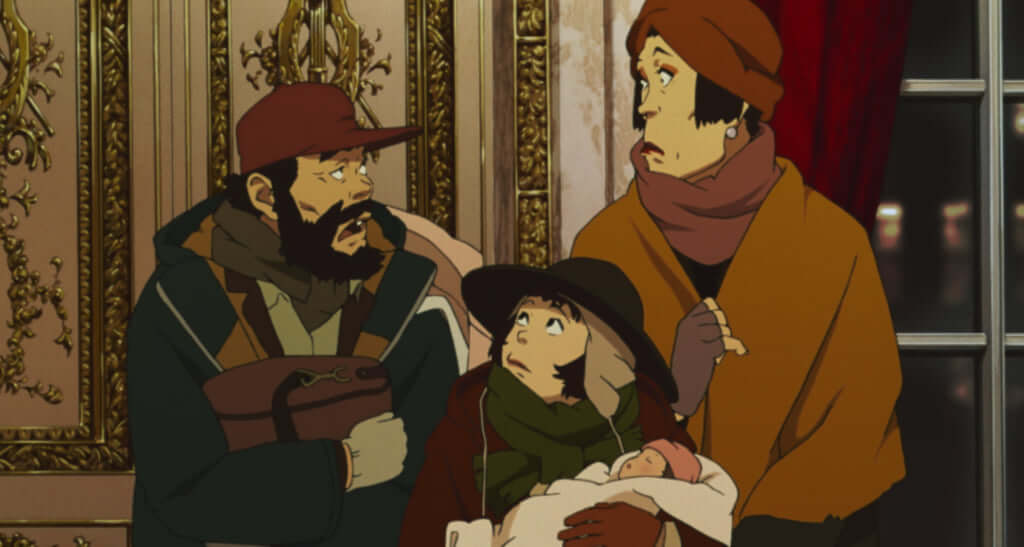