The Last Barrels of Tradition

Large wooden vats are necessary for traditional nihonshu-making. Unfortunately, there is only one craft shop in all of Japan still capable of making them. 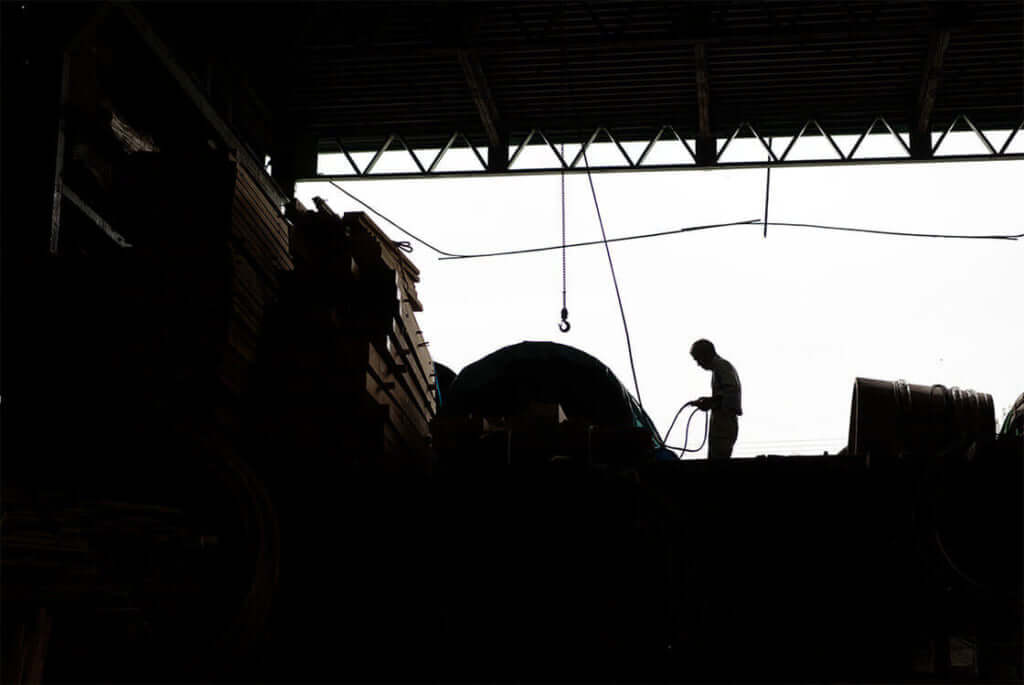 Not long ago, Japanese sakes were still being made in giant wooden vats that were sometimes larger than two meters in diameter. The vats can be seen in Hokusai’s paintings as well as in other ukiyo-e artists’ work, showing how widespread their use was. However, times have changed. After the war, wooden vats were gradually replaced by stainless steel or enamel. Today, there is only one craft shop capable of making wooden barrels with a diameter of more than one meter—Wood Work, a studio at Sakai, in the suburbs of Osaka.

Located some 20 km to the south of the city of Kansai, the town of Sakai was a natural logistic base both for men and for merchandise, which was served by five major roads. It brought traders together, including, Sen no Rikyu, the renowned tea master. The town prospered from exchanges with the Dutch, Portuguese, and Spanish. Celebrated for the skills of its craftsmen, it built its reputation on rifle and sword production. Its proximity to sake breweries as well as the prefecture of Nara, a strategic site for the Yoshino cedar that was essential for manufacturing wooden barrels, made Sakai a preferred territory for coopers to set up shop—and there were forty eight of them at the time. Wood Work studio, also known as ‘Fujii Seiokesho’ was established in 1916.

Why is nihonshu made in wooden vats so good? It is frequently said that sakes made this way exude an agreeable and smooth taste, but science has never succeeded in explaining the reasons. According to Takeshi Ueshiba, founder of Wood Work studio, barrels provide an ideal environment for fermentation because the porous surface of the wood encourages yeast development, and the vat’s internal temperature is less sensitive to external factors and therefore more stable than vats made of metals, allowing the yeast to breathe and thrive. Also, as time goes on, the types and number of yeast present in the vats change and convey very different personalities to the sakes. 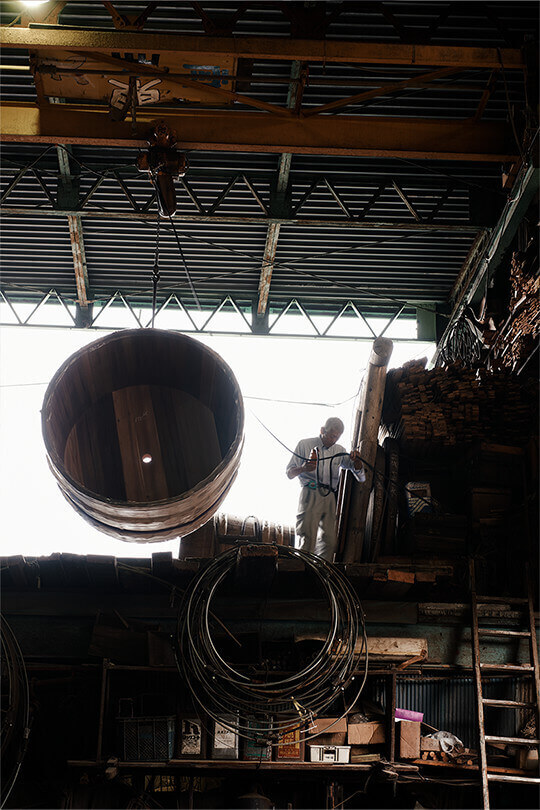 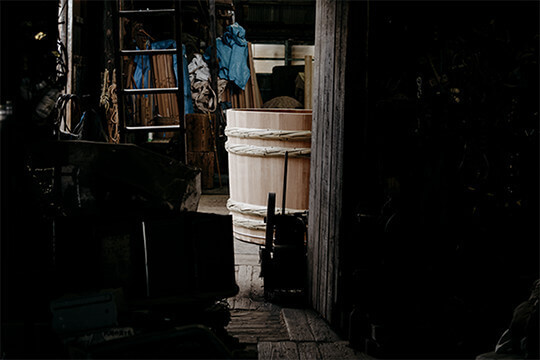 Koshiki vats, with a diameter of 2 meters and a height of 1.2 meters, are used for steaming rice for sake.

No fewer than forty planks of Yoshino cedar, more than 100 years old, are needed to make the vats. These planks are first of all bent to form the rounded shape of the barrel, then assembled vertically to form a cylinder. They are then locked and adjusted with a braided bamboo hoop. No glue is used, simply bamboo nails, fixed in various spots to make the hoops. The base is then fitted. This operation requires the mobilization of an entire team, as they have to lift a square piece of timber weighing more than 100 kg while ensuring each person releases it at the same time. The structure is simple to make, but advanced knowledge and skills are necessary to evaluate the nature of the wood and to adjust the assembly of the planks to prevent any loss of liquid. Such expertise cannot be acquired overnight. The working life of a wooden vat is generally from between 100 to 150 years, surpassing the average human lifespan. Stored for around thirty years in a cellar, these are then repaired and reused for soy sauce or miso storage. This had always been the life cycle of a vat in former times, but it appears to be under threat now.

‘The average age of Wood Work craftsmen is nearly seventy, and they have no successors. At this rate, there will soon be nobody capable of making or repairing wooden vats, and the expertise associated with the manufacture of large vats will die out’, laments Mr Ueshiba. However, the coopers are not the only ones who will be affected. More than two hundreds different types of tools are needed to make these vats, and the last craftsman capable of making them retired several years ago. The tools used by Wood Work craftsmen were bought from colleagues who had given up their trade, and they have to be handled with care. The wood-cutting process necessary to make the vats is nothing like that employed for ordinary building work. The section closest to the bark of the cedar is white, and the closer one gets to the center, the redder the wood becomes. The border between the white and red part of the wood is called kotsuki and is impervious to liquids. Only four kotsuki planks can be obtained in this way from a single hundred-year-old cedar, making these pieces very rare. Alternatively, craftsmen who specialize in wood cutting used to supply high-quality fine-grain planks without knots. Since the disappearance of the latter, coopers have had to rely on their own knowledge of the material to cut the raw timber themselves. The disappearance of traditional wooden vats heralds the end of the traditional method of making sake, and it will not take long for the few vats still stored in cellars to become unusable. Despite all this, there is hope. Young vintners and craftsmen wishing to preserve the authentic taste of sake are restarting wooden vat production, which they use for their manufacturing. Consumers also have a role to play by shining a spotlight on the unique value these sakes have, instead of focusing on nihonshu with the typical taste where artificial yeasts have been added. By increasing demand, new volunteers will doubtlessly appear to meet it. Archive documents, specifically operational analyses, are already being compiled to ensure that the renewal of craft techniques will continue into the next century. The future of the ancestral tradition of sakes produced in wooden vats is therefore heavily dependent on consumer interest. 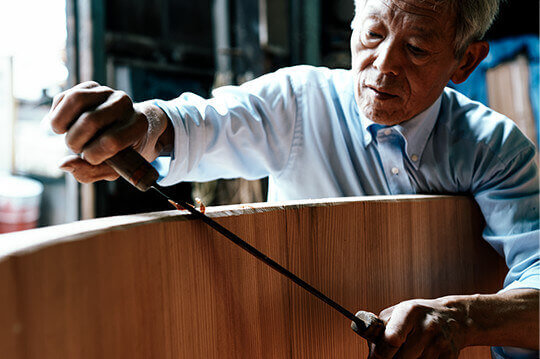 This tool, known as the sen, is used to sand the corners of the vat's base properly. 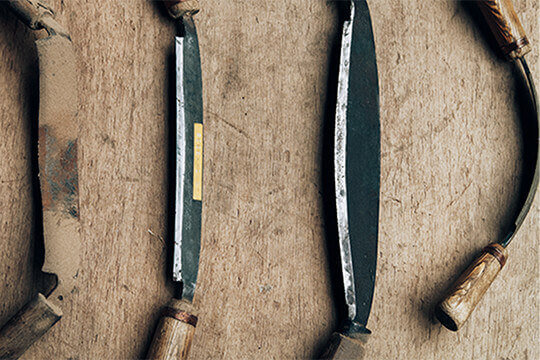 The only craftsman still capable of making the tools retired six years ago, ending production of tools necessary for vat-making.

#02: The Last Barrels of Tradition 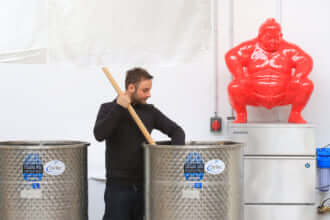 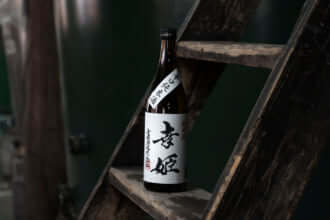