From My Kitchen to Yours – Mory Sacko

On the menu at his restaurant Mosuke, a dialogue of flavours between Japan and West Africa runs through recipes inspired by the two cultures. 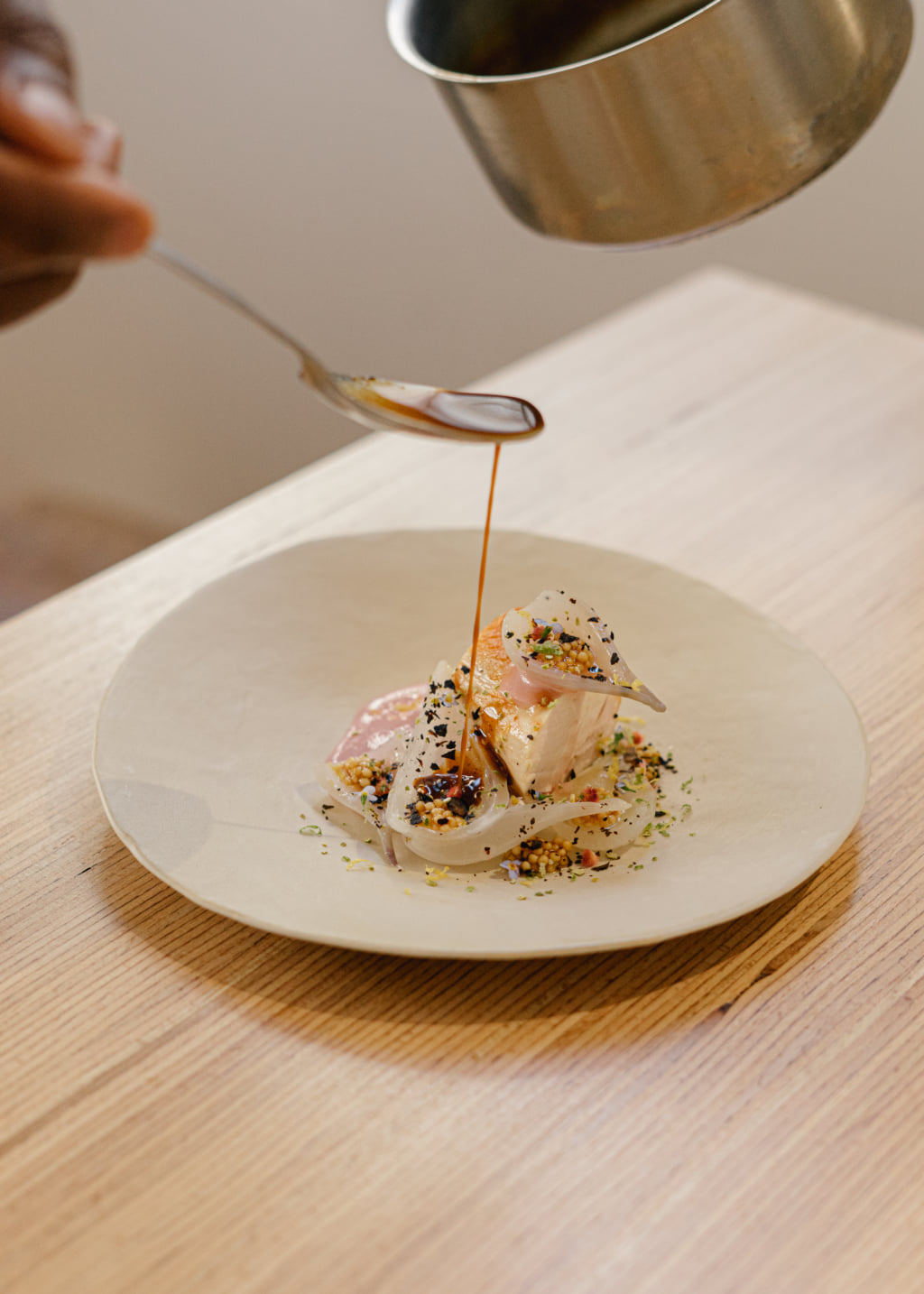 Mory Sacko took up residence in Paris, in the 14th arrondissement. He established his restaurant Mosuke there in 2020, after his standout performance on the popular French television show Top Chef the previous year. Things got off to a difficult start due to the Covid-19 pandemic, but the establishment soon received a first Michelin star in 2021, in recognition of its daring gourmet cuisine, devoted to the dialogue between three cultures: France, West Africa and Japan.

Mosuke is the contraction of the chef’s name and that of Yasuke, a former African slave who became a samurai and a member of the inner circle of Nobunaga Oda, one of the unifiers of Japan. ‘It’s a beautiful story that I found incredible because it’s the embodiment of what I want to do in the restaurant’, Mory Sacko explains to Pen. The chef has been fascinated by Japanese culture since he was a child, when he would spend time watching anime and reading manga, in which food occupies a prominent position.

Mory Sacko has a lasting memory of the first time he tried sushi. Eating raw fish is not something that is done where he is from. His father is from Mali and his mother, a former chef, was born in the Ivory Coast and grew up in Senegal. Thus, sea bream sushi, with its unfamiliar flavours and texture, aroused the young man’s curiosity.

However, he turned his attention towards French haute cuisine for his training, joining chef Hans Zahner’s team at the Royal Monceau at the age of 19. The palace welcomed a branch of Matsuhisa, the famous establishment by chef Nobu Matsuhisa. While there, Mory Sacko discovered the rudiments of Japanese cuisine, like how to make a dashi broth or use miso. Later, alongside Thierry Marx and his primarily Japanese brigade at the Mandarin Oriental, he honed his approach towards dashi and became acquainted with Japanese techniques like cooking on charcoal binchotan.

Products appreciated for their umami flavour

Ingredients from Japan never stray far from the chef during his experiments and are now part of his ‘chef’s suitcase’, like shichimi togarashi, a blend of seven spices lifted by red chilli and sansho pepper. It harbours the umami flavour, present in numerous products from rice to miso, as well as dried fish and smoked ingredients.

‘What I like about Japanese products is the fact that the ingredients are very simple but what makes the difference is the time you dedicate to them, the involvement you take and dexterity’, he explains. ‘They require more finesse when mixing. Japanese myoga ginger requires more research than classic ginger, for example, because it is more expansive and has fewer notes. What you lose in strength you make up for in elegance.’

It was therefore quite natural that Mory Sacko came to incorporate Japanese ingredients into the African recipes he has known for as long as he can remember. He realised that the only two cultures that make such apparent use of smoked fish are those of West Africa and Japan, the latter with its famous katsuobushi. The idea gained ground and he decided to launch Mosuke, with a menu constructed like a conversation between the continents, their recipes and their products, and all with a French-style aesthetic to reflect the chef’s training.

The challenge of marrying Japanese and African flavours

The menu includes a version of Senegalese chicken yassa with sudachi, a little citrus fruit from southern Japan, and a chilled hiyajiru soup with cucumber soup, miso and okra that’s reminiscent of the Soupou Kandja that Mory Sacko’s mother used to make.

The main challenge for the chef was marrying Japanese and African flavours. ‘In Japan, there’s a strong passion for blandness’, declares Mory Sacko. ‘African flavours, on the other hand, are very powerful and marked. It’s about finding a balance between the quest for subtlety and that of the permanent heat from spices and chilli. Thus, the Japanese-inspired dishes that play more on blandness often arrive first, in the starters, and then come the hot African dishes.’

The products used in Mory Sacko’s creations are carefully selected from specialist suppliers of Japanese ingredients, like the delicatessen Umami Paris. ‘Although some people are starting to produce miso in France, we can’t achieve the same complexity or finesse as Japanese miso’, declares the chef, who uses several varieties of the fermented paste, which is in fact a key ingredient in his iconic dish of Breton lobster cooked over binchotan coals accompanied with tomato miso.

The products that Mory Sacko has imported from Japan include fresh wasabi root, umeboshi — ideal for adding a touch of saltiness and acidity to chicken broth — and superior soy sauces that he frequently uses to add salt, deglaze sauces or make translucent broths thanks to shiro shoyu, a variety of white soy sauce.

The drinks menu at Mosuke has not been overlooked; indeed, special attention is paid to the selection of sakes, which are paired with dishes like wine. ‘Sake is part of my restaurant’s identity’, the chef states. ‘I even think that it goes better than wine with my food and its exuberant, spicy flavours.’ Umeshu, yuzushu and other liqueurs like shiso are also offered to accompany desserts.

A laboratory for continuous experimentation

Mory Sacko works on the basis of his products and thus takes a seasonal approach. He continues to extend the repertoire of his African-Japanese skills, for example by working to develop a harissa made from nori seaweed, ‘a balancing act to ensure that the flavour of the nori is not suffocated by the chilli’, he explains. He also reinvents other well-known dishes like Ivorian Pèpè Soup, a strong soup made with chilli but reworked here so that the infusion has the same density and sweetness as a dashi.

Just one boundary remains for the young chef to cross, and it is one that connects him to Japan, a country he admires and of which he has a deep knowledge, despite not yet having had the chance to go there.

Mory Sacko agreed to share his recipe for sole cooked in a banana leaf with Pen, accompanied by spinach purée and fried quinoa.

Remove the sole fillets (or have them removed by the fishmonger) and season with salt and the togarashi shichimi mixture. Roll the fillets in clingfilm, forming a sausage shape by rolling the ends to hermetically seal them. Place them top to tail in a dish and leave to rest in a cool place for 1 hour.

Preheat the oven to 180 degrees.

Once they have rested, remove the fillets from the clingfilm, then roll them in the banana leaf, closing them tightly. Cook at 180 degrees for 8 minutes.

Once cooked, burn the banana leaf lightly with a blowtorch (optional).

For the spinach purée

Pour some water into a saucepan with a little salt and bring to the boil, then add the spinach and cook for 3 minutes. Cool the spinach in a bath of iced water, then remove it. Mix the spinach leaves, adding a little water. Once the purée is smooth, heat it in a pan and add the cream, then mix all together to obtain a homogenous mixture.

For the fried quinoa

Rinse the quinoa in a salad bowl. Pour some water into a saucepan and place over a medium heat. When the water is simmering, add the quinoa and cook for 4 to 6 minutes. Drain, then leave to cool.

Add some oil to a hot pan and fry the cooked quinoa  for 2 minutes until crispy.

Place the spinach purée on a plate, then add the fried quinoa on top. Place the sole next to it and add some togarashi shichimi mixture on top.

More information about Mosuke can be found on the restaurant’s website.
Address: 11 rue Raymond Losserand, 75014 Paris 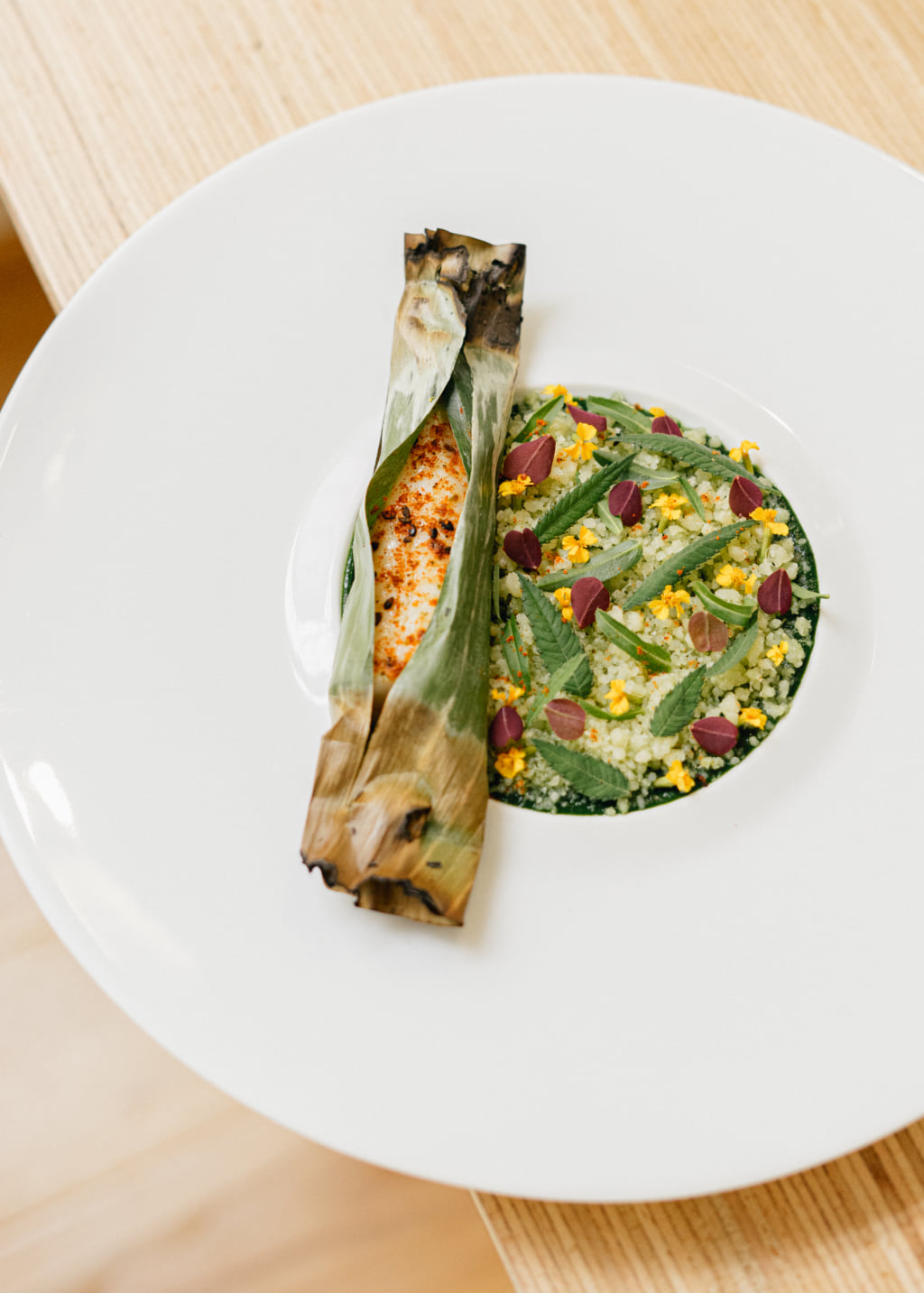 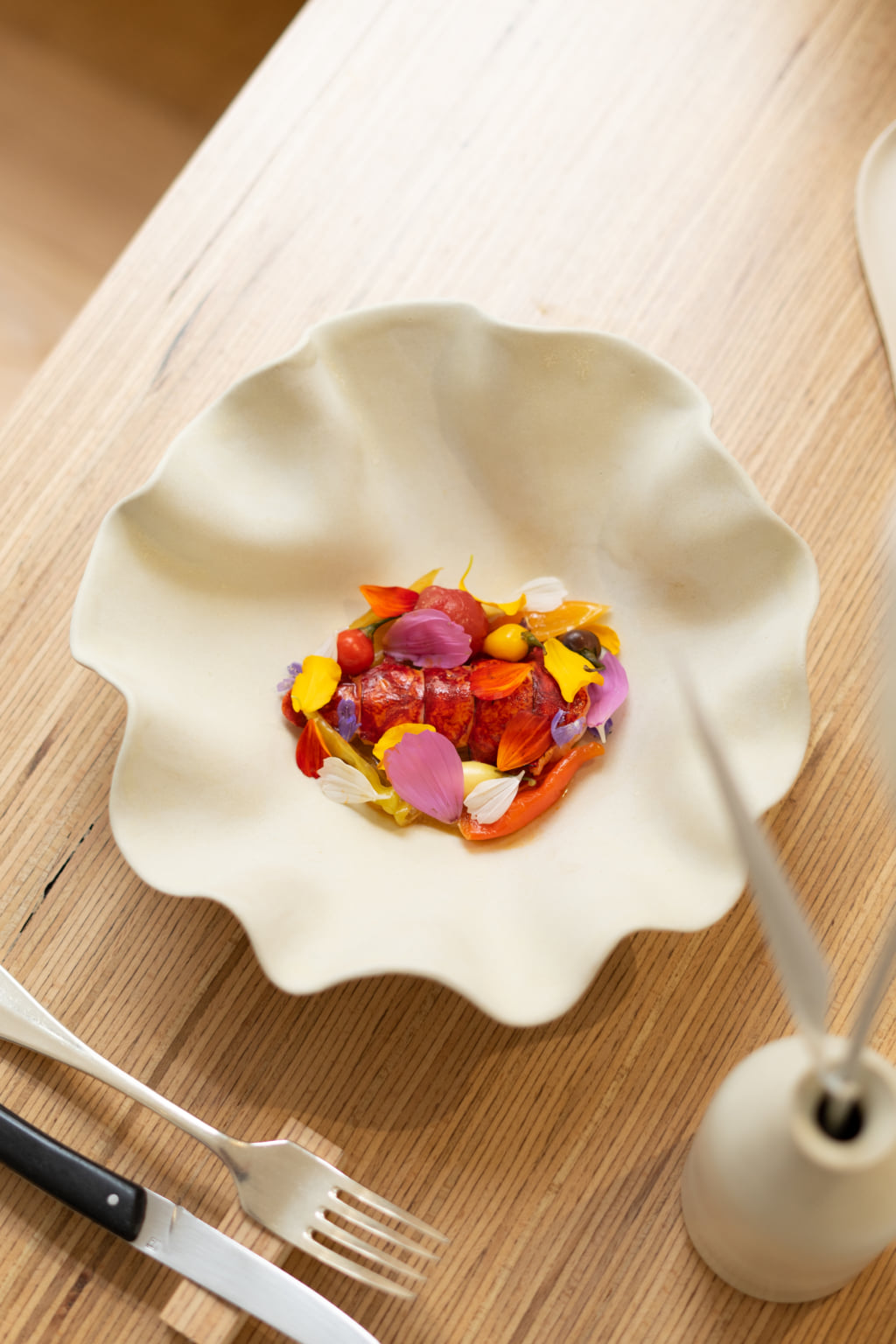 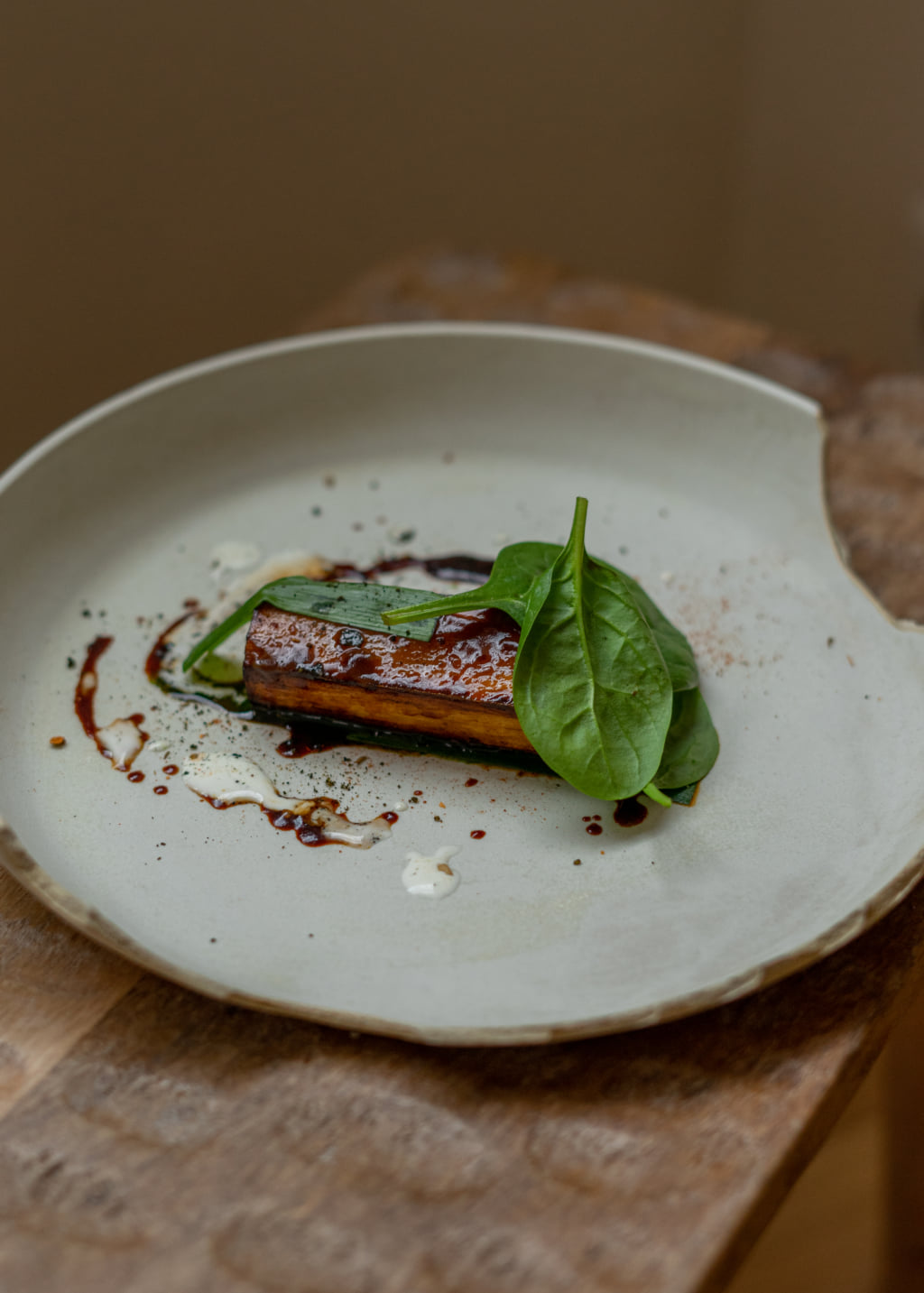 Cassava glazed with soy sauce, spinach like in a Saka-Saka, coconut and ginger © Quentin Tourbez 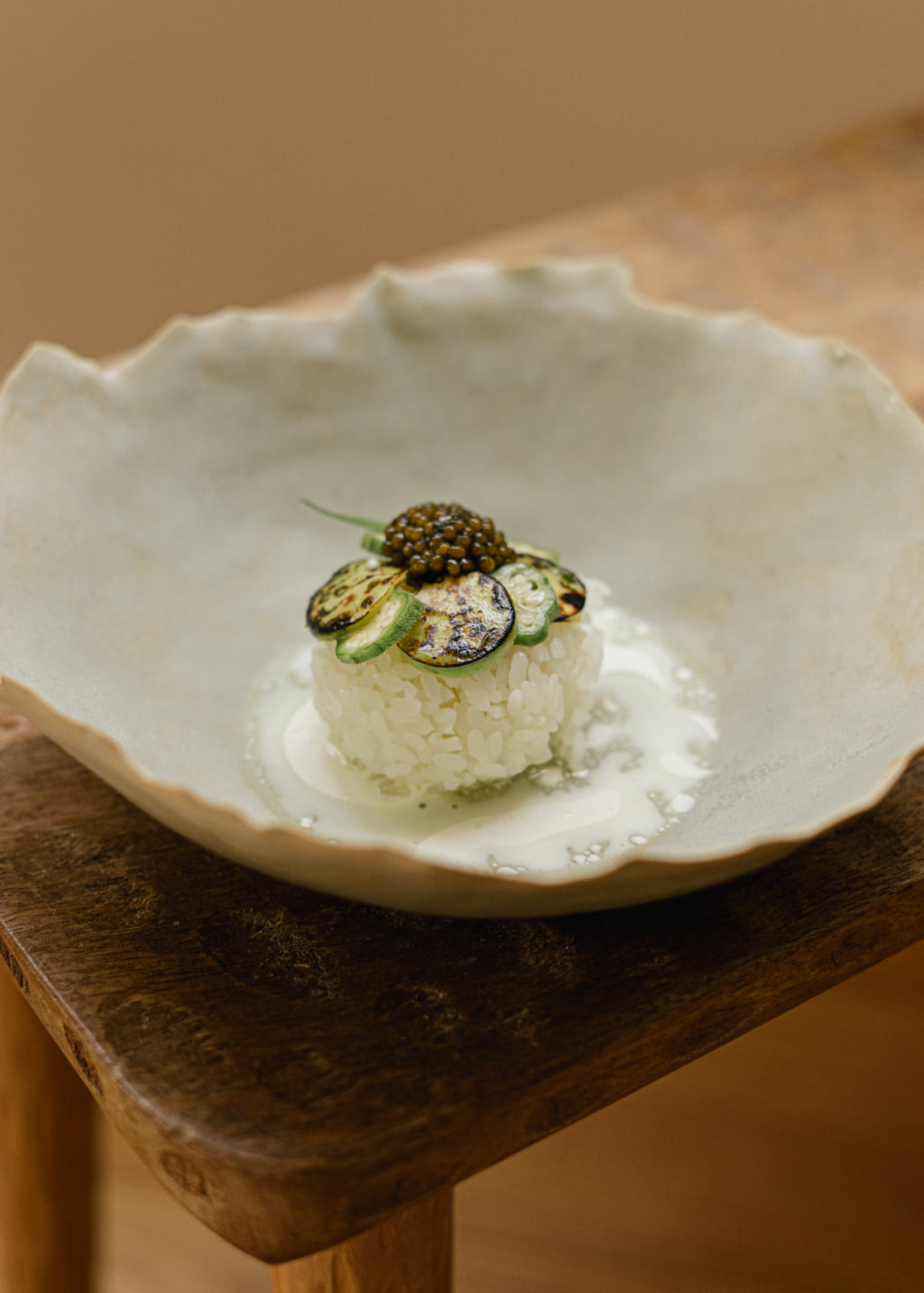 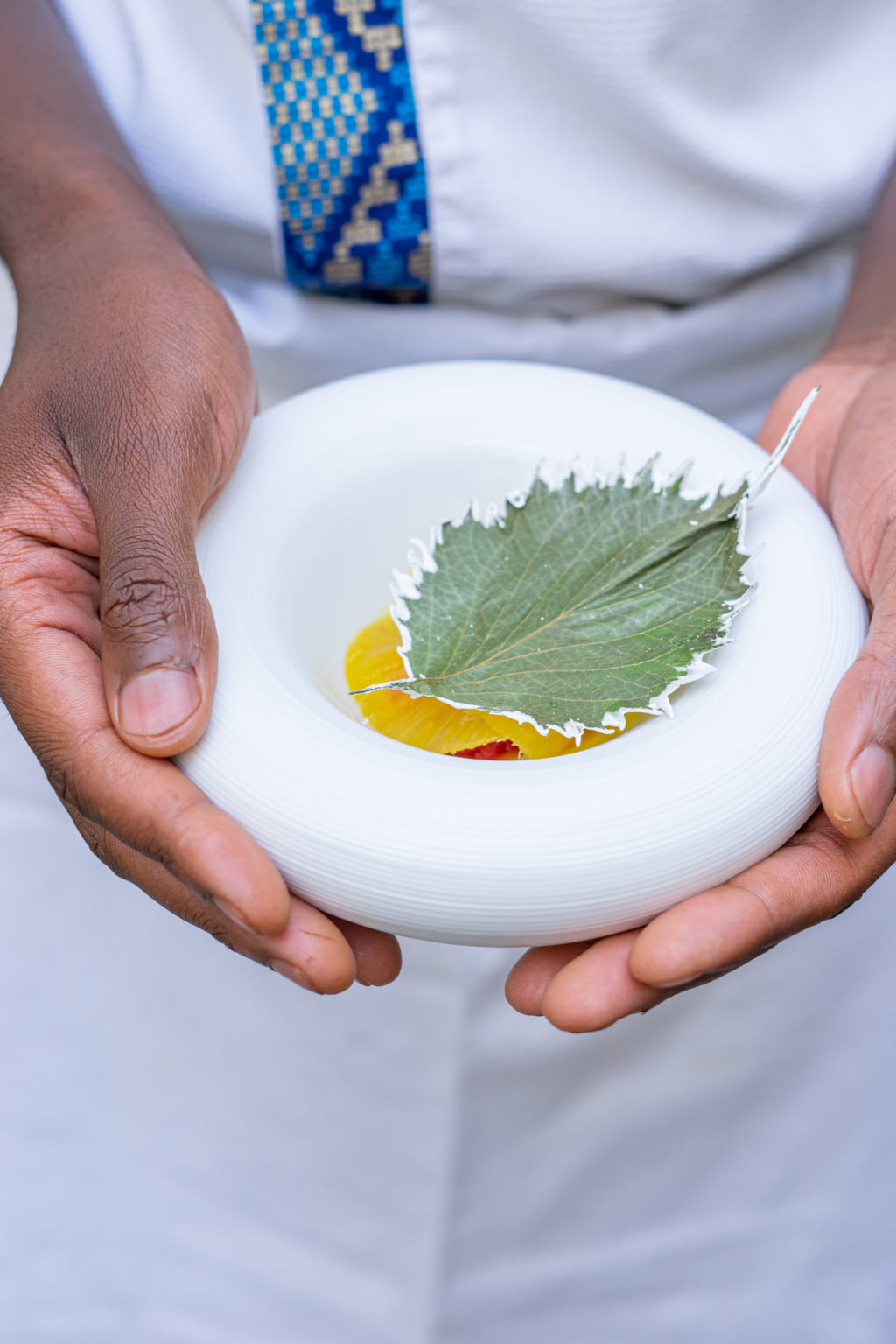 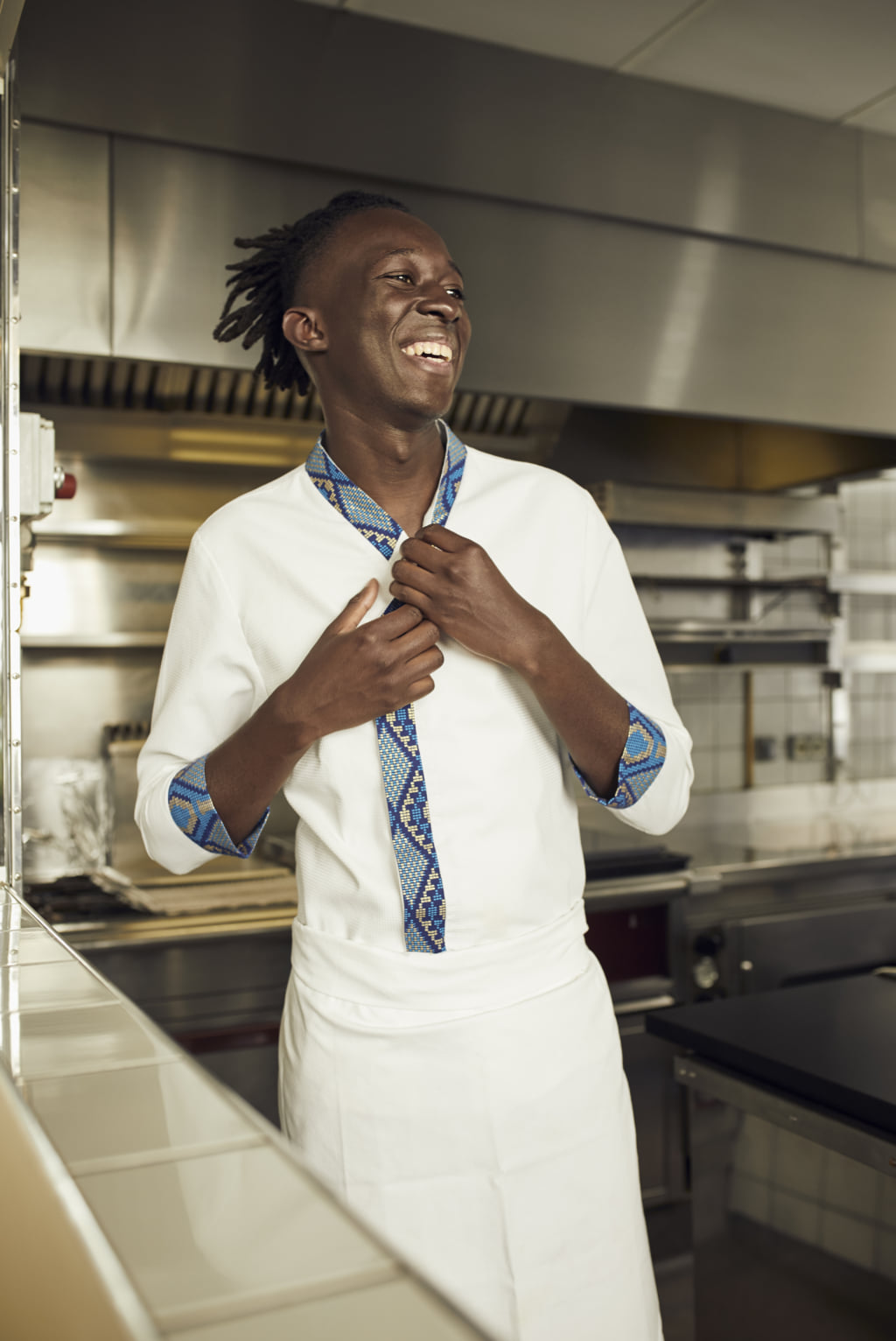 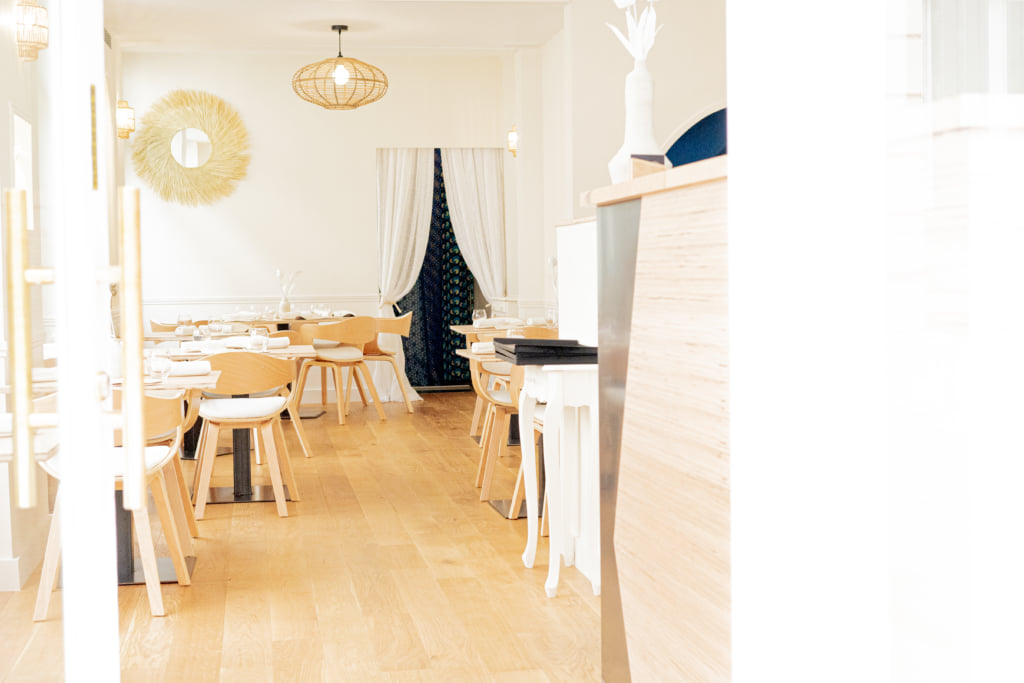 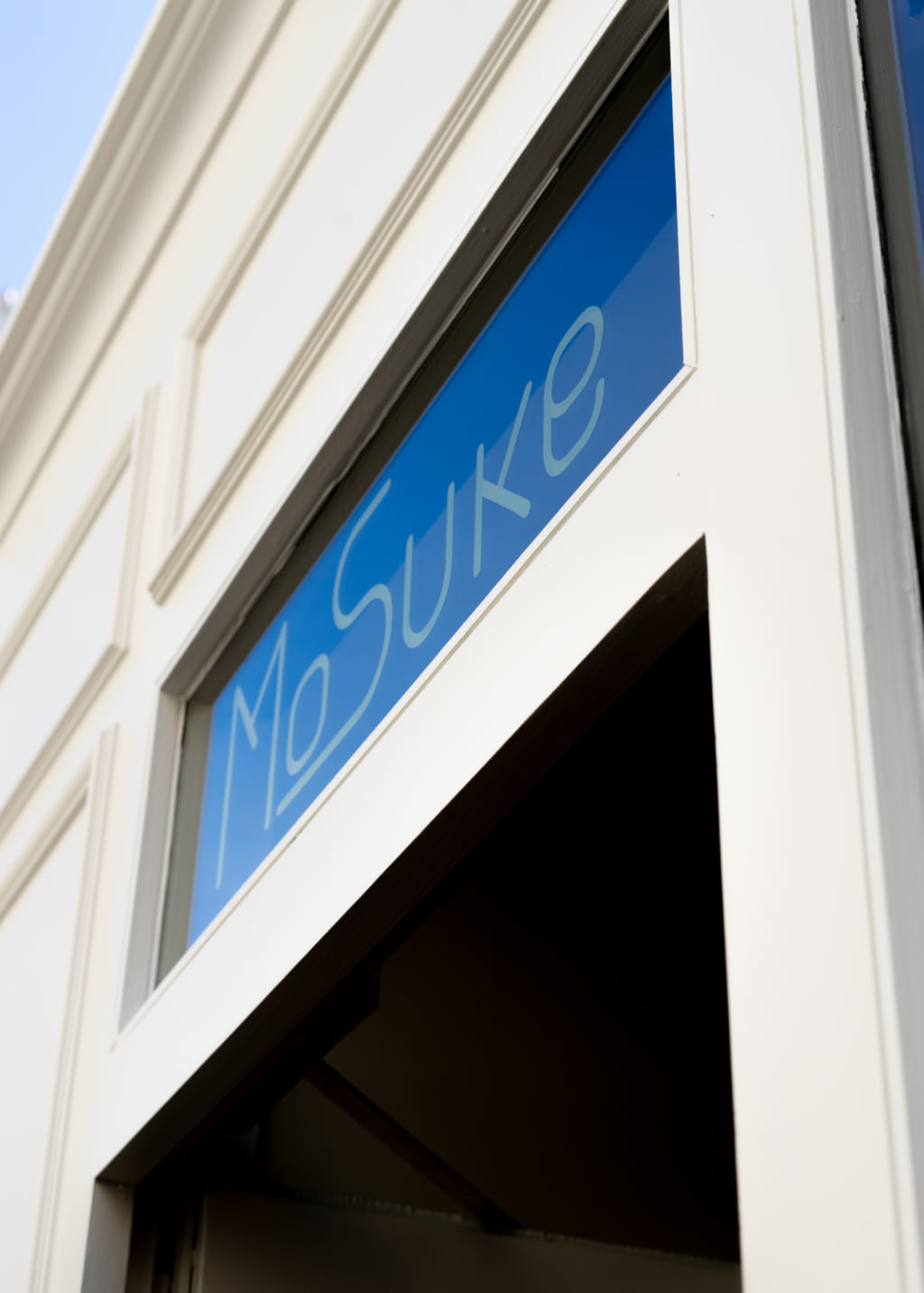 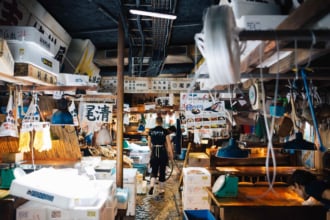