The Rise of Japanese Whisky #03 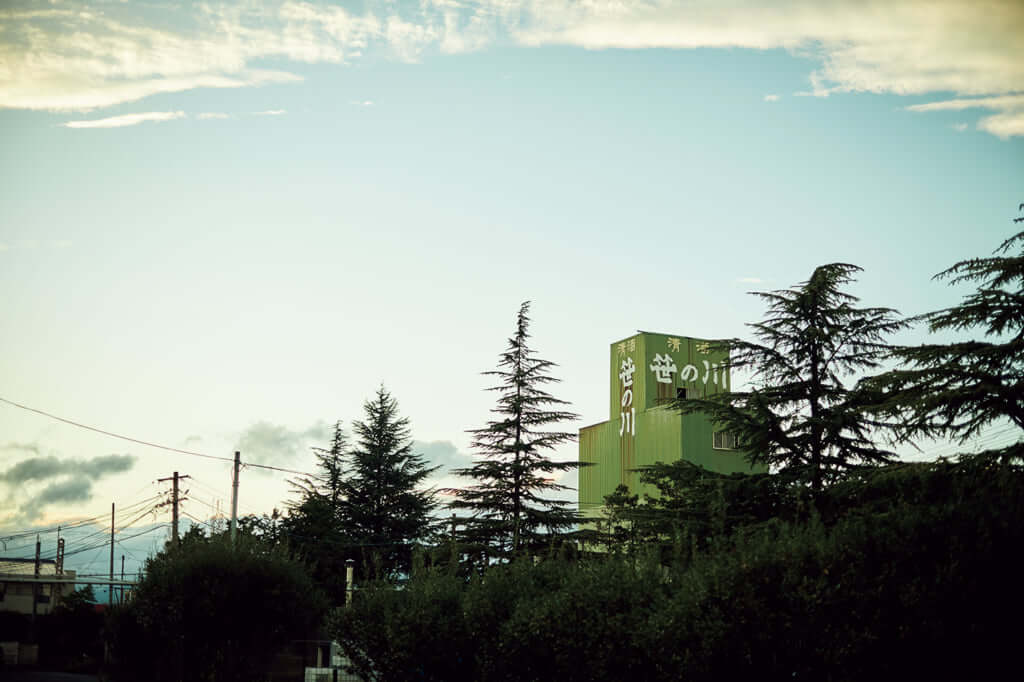 The sun rises behind the Sasanokawa sign emblazoned on the green building within which their column stills are in continuous operation.

Lake Inawashiro, at the base of picturesque Mt. Bandai in Fukushima prefecture, has another, more poetic name. Locals sometimes call it Tenkyouko, The Mirror of Heaven, for its serene beauty, crystal clarity, and the brilliance with which it catches the sunlight.

It was in these environs, in Koriyama City just to the east of the lake, that the Sasanokawa Brewery set up operations in seventeen sixty-five, rapidly establishing an enduring reputation as one of the prefecture’s most prestigious sake producers, a reputation they maintain down to this day.

If one had been present at the company’s two hundred and fiftieth-anniversary celebration in two thousand fifteen one would most certainly have been stricken by the juxtaposition of modern Western whisky distillation equipment with the classical Japanese setting; the gleaming copper pot stills standing out in eccentric contrast to the facility’s age-worn white walls and weathered timberwork ceiling, as if this unique blending of disparate elements were somehow alluding to a secret promise contained within this new distillery freshly grown out of rich tradition. 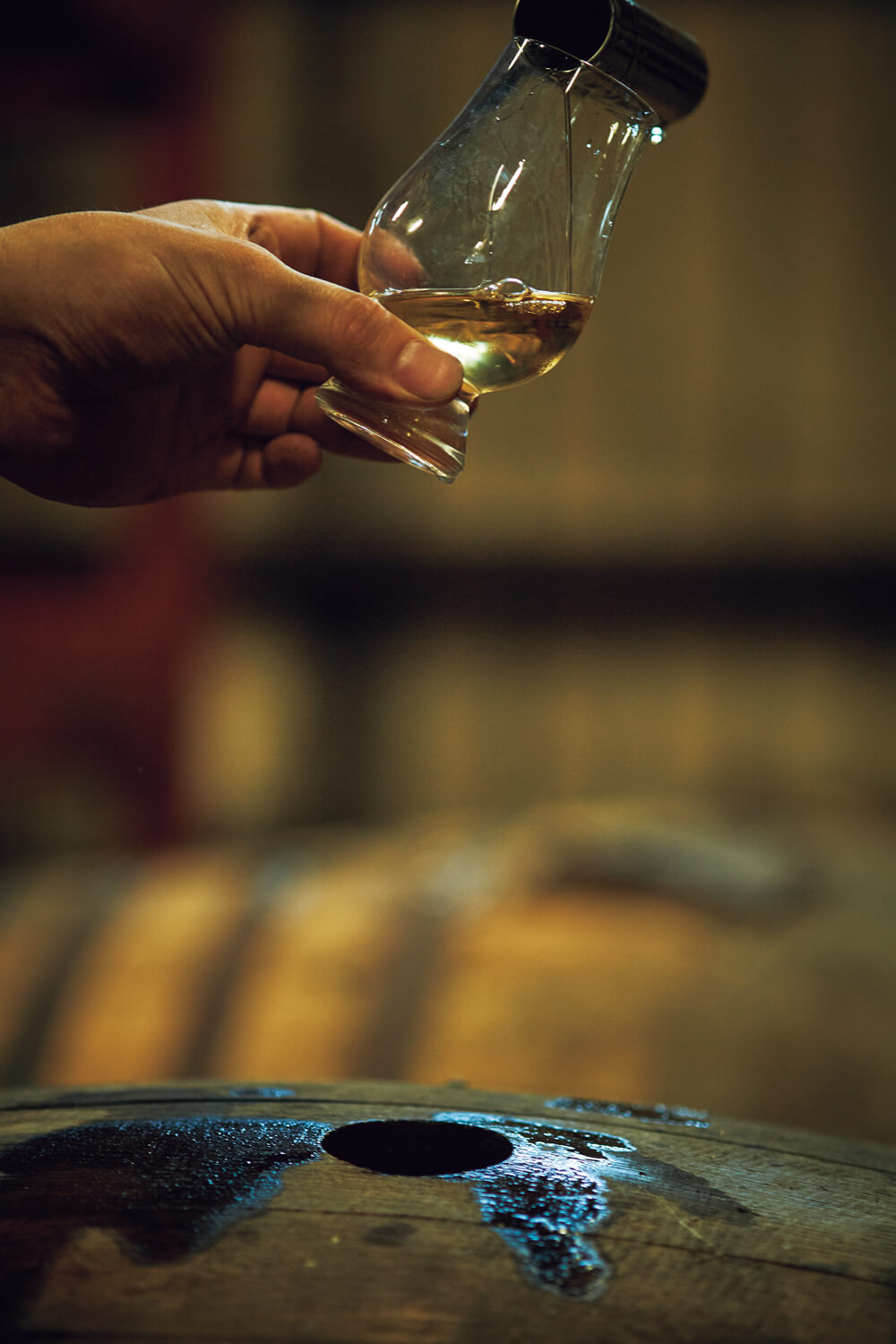 At the end of last year, the Sasanokawa Brewery proudly unveiled their new whiskey brand, the Asaka Distillery, but this isn’t their first foray into the whiskey business.

The Sasanokawa Brewery first got their license to distill whiskey in nineteen forty-six, just after the end of the Second World War, and soon after, they launched their beloved Cherry Whisky, which gained great renown in Japan during the domestic whisky boom of the nineteen-eighties, but it took a historic meeting  between Sasanokawa Brewery’s then-president Tetsuzo Yamaguchi and legendary craft whisky pioneer Ichiro Akuto of Venture Whisky, to take the brewery on this bold new trajectory.

Akuto’s Hanyu Distillery had become insolvent and the business was in immanent peril, and it was at this meeting that Yamaguchi was moved to step in and agree to store Akuto’s entire remaining stock of whiskey. Reflecting on this game-changing confluence of events, Mr. Yamaguchi says, ‘If I hadn’t met Mr. Akuto and witnessed his passion for whiskey first hand, Asaka Distillery would certainly not have come into existence’. 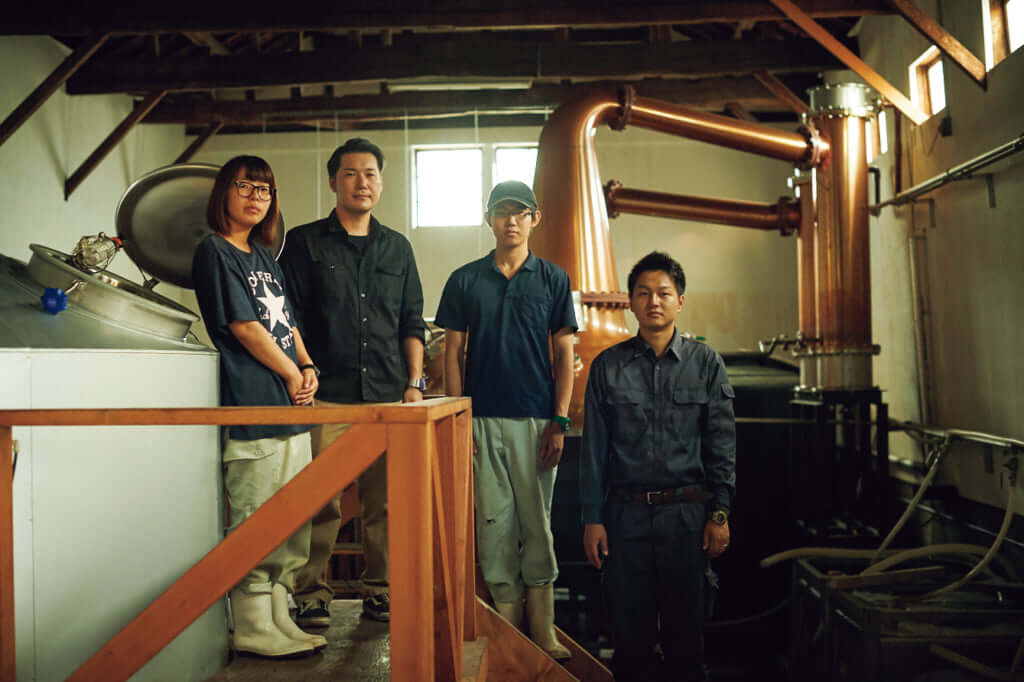 At 8:00 a.m. a siren signals the start of the workday as the distillery workers stride to their stations with a sense of pride and purpose.

The distillery team is surprisingly young. Daisuke Taura supervises operations at the distillery despite being a mere thirty-five years old. His unique background is what earned him this position. Before he was tapped to manage operations here, he owned a bar in Koriyama, where his exposure to the Single Malt Scotch Whiskey Caol Ila evolved into a life-changing love affair. The artisans working under him are all still in their twenties. 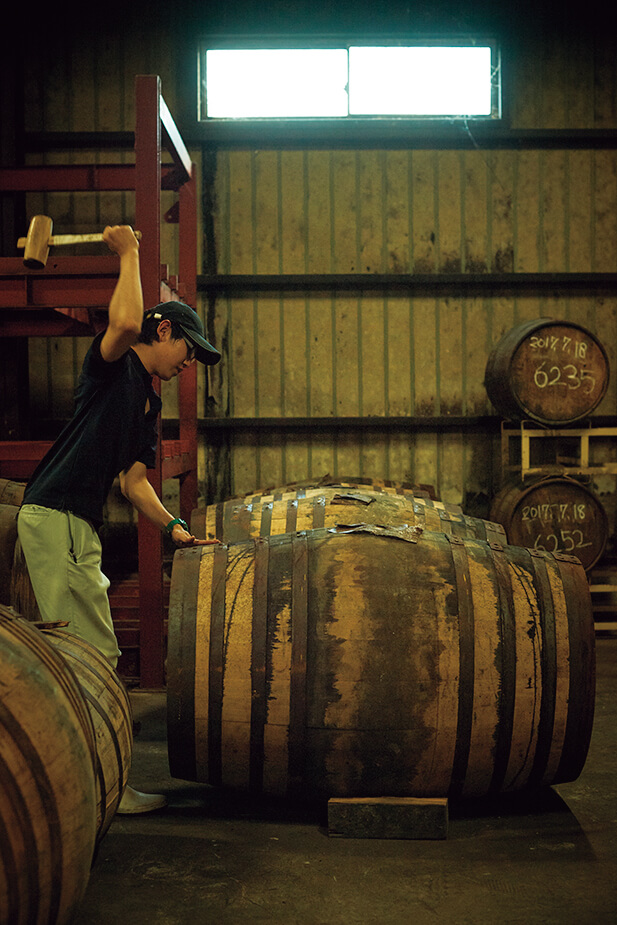 Each new batch of whisky begins with four hundred kilograms of malt, which is milled into a course grist, then shifted to a mash tun, a large tank, where the grist is blended with twenty-four hundred liters of hot water. After that, the mixture, now called a mash, is moved to a washback, a stainless steel fermentation tub, where it is allowed to ferment for seventy-two hours under the watchful eye of Master Distiller Taura.

One wonders how they establish the standards by which they evaluate their whiskey. ‘In sake brewing, one only develops a reliable nose and refined palate over time’, answers Mr. Yamaguchi, adding that this level of refinement is a unique strength of the Asaka Distillery.

He continues, ‘Sake brewing has a vocabulary as rich as its history, including such nuanced concepts as Amakuchi meaning, roughly, sweetness, Karakuchi or approximately, dryness, Uwadachika, literally the ‘rising aroma,’ relates to the bouquet that rises off of the sake when brought close to one’s nose, and Fukumika, the aroma that is released when one inhales mid-sip. Whisky tasting, on the other hand, tends to borrow vocabulary from more mundane expressions such as ‘vanilla like’ or ‘spicy’, a vocabulary that we find frustratingly limiting. It was only natural for us to incorporate our sake brewing sensibilities into our whisky-making’. 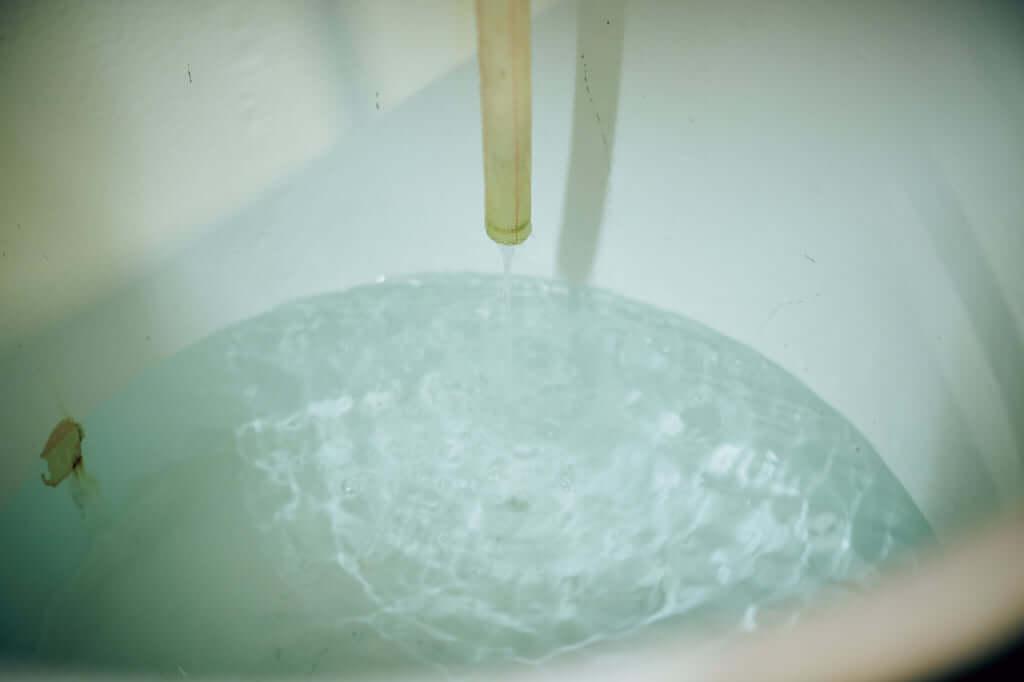 This unique Japanese sensibility permeates every aspect of operations at the distillery. They have even gone so far as to experiment with using sake yeast from the brewery instead of more conventional imported yeast cultures. They tested four strains of yeast in total, and each one released novel qualities in the spirits it produced. They found  the Daiginjo yeast particularly impressive,  giving off rich Daiginjo sake overtones as it fermented.

More recently they have begun experimenting with aging whisky in oaken sake barrels. They are excitedly anticipating discovering how the rich umami and delicate nuance of the sake will play out in the finished whisky. 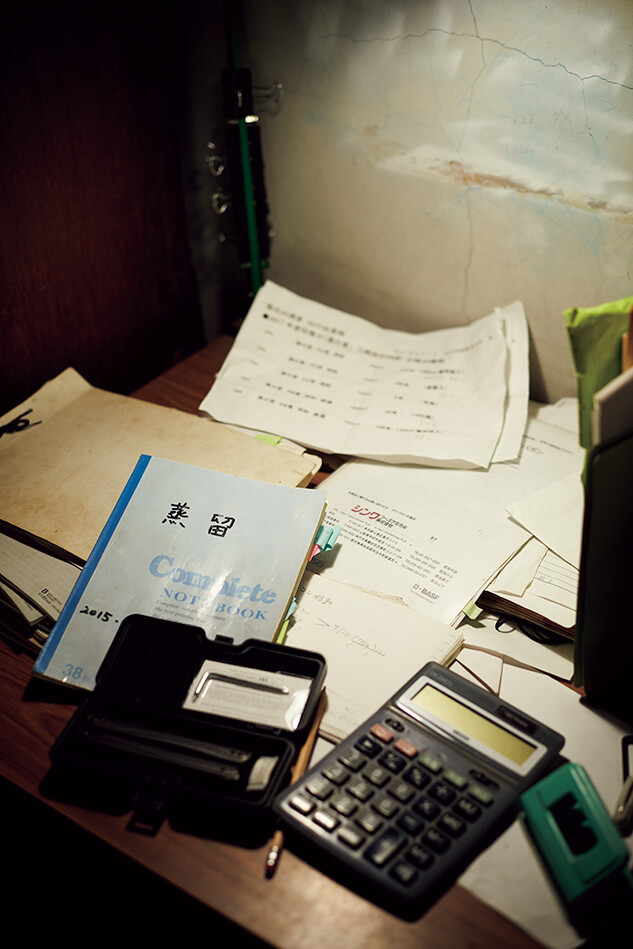 Meticulously kept records stack up on the distillers’ desk. 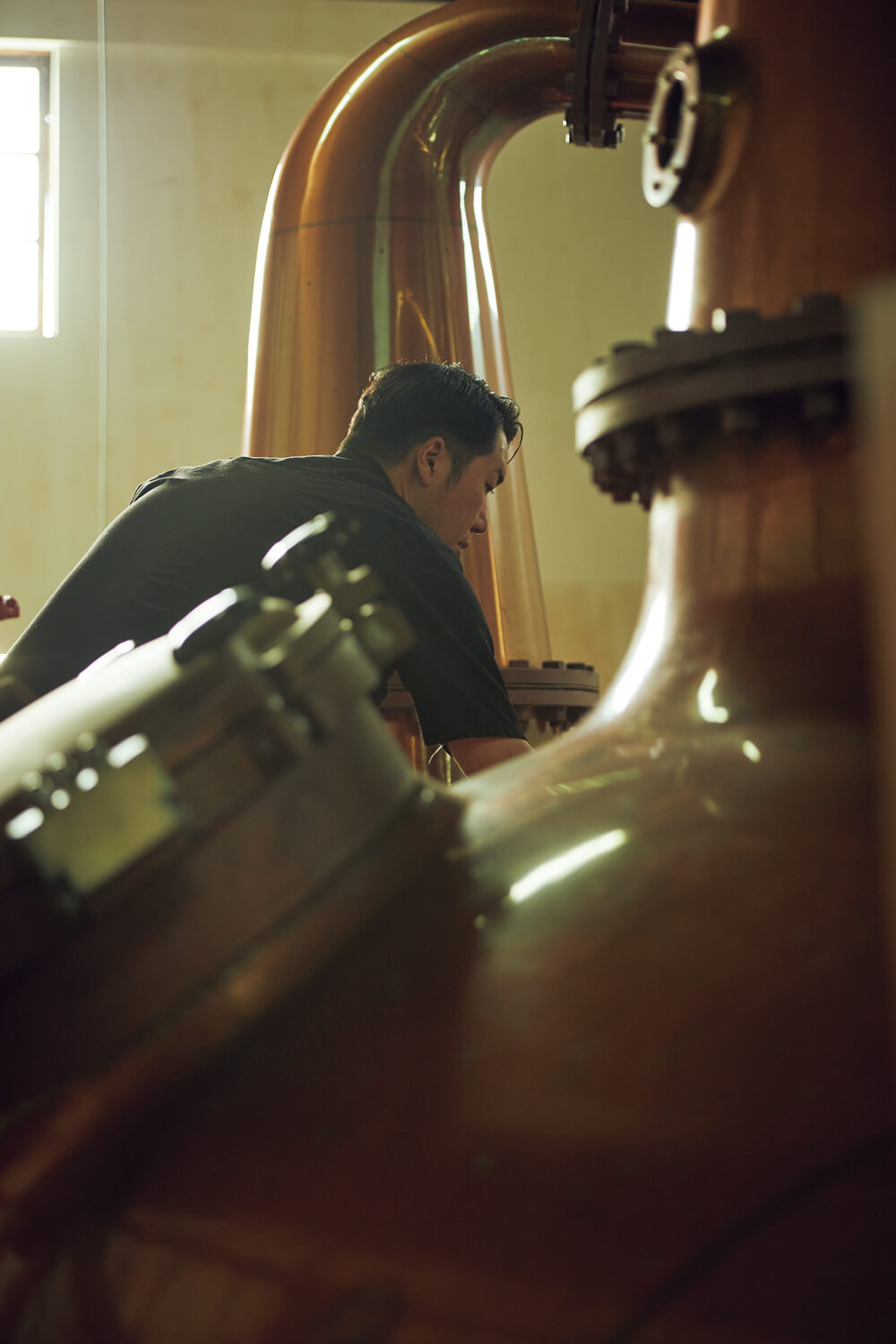 Ultimately, to master the distillation process, the distiller must develop a highly refined sensibility. A subtle mis-step in timing can spell the difference between perfection and mediocrity.

Even the local climate contributes to the quality of this one-of-a-kind product. They have dubbed the Asaka Distillery the windy distillery, after the strong winds that blow across the plane, in particular the merciless cold, dry, winds that blow down from Mt. Bandai in winter. These blisteringly frigid winds, called the Bandai-oroshi, create an extreme disparity between the summer heat and the winter chill, which brings out remarkable flavors in the whisky that the distillery ages here.

The distillery has only been in operation for a little over a year, since autumn of two thousand sixteen, and even though they have only released a very limited number of products so far, the products they have released amply illustrate a uniquely Japanese sensibility that can only have come from their two hundred and fifty year legacy of sake brewing combined with the craftsmanship of a dedicated team of highly skilled young whisky makers. 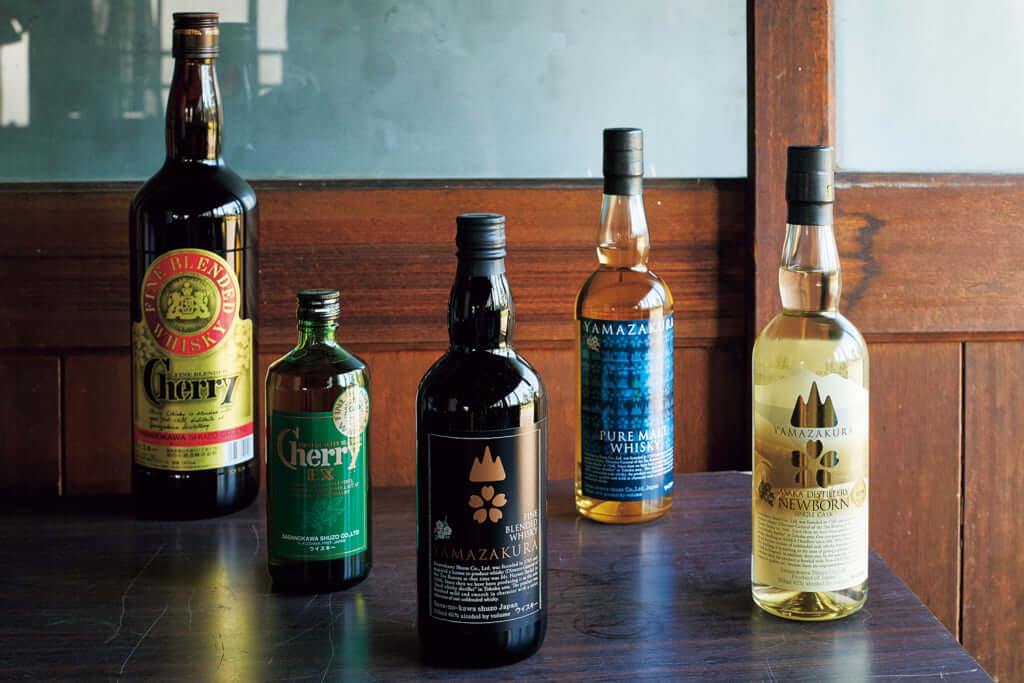 Cherry Whisky became popular during the domestic whisky boom of the nineteen eighties. Newborn, a surprisingly smooth young release whisky, is just one of a growing range of products being released by the Asaka Distillery.

The Rise of Japanese Whisky —