At the end of January in Kyoto, in a restaurant that is nearly one hundred years old, a lunch brought together the best of Japanese cuisine and Hokkaido fine food. Guests of honour included a starred French chef, one of Burgundy’s most reputed producers, and several winegrowers from Yoichi, the northern island village promoted as the new Japanese wine capital. Lunchtime! 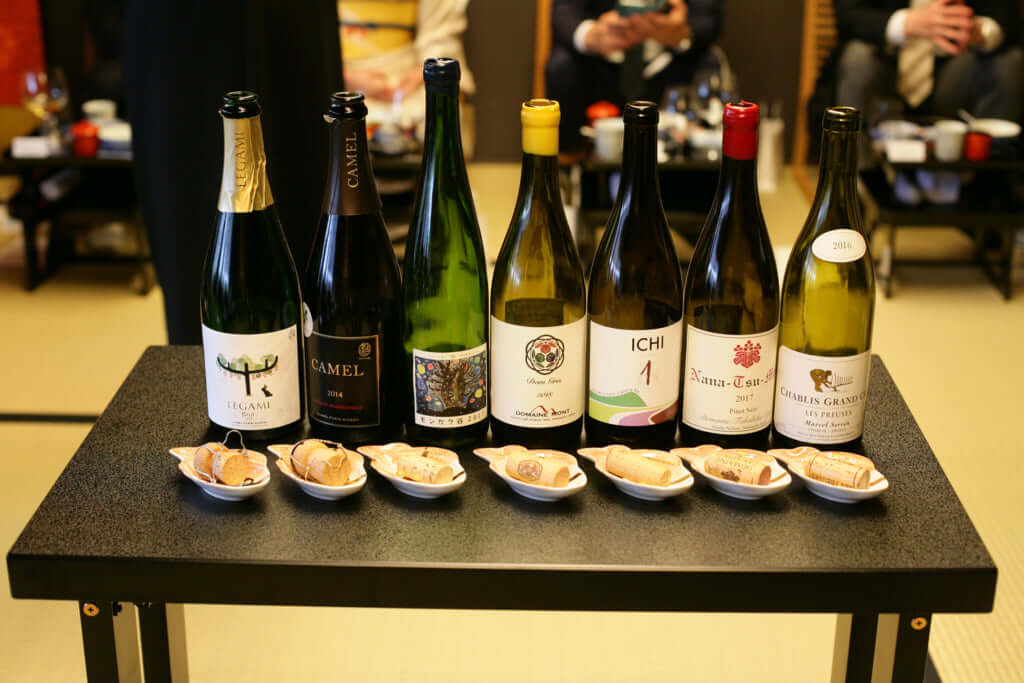 In addition to the natural wines of Yoichi and Niki, guests were treated to the participating Domaine Servin of Chablis and wine from the Camel Farm Winery in Yoichi.

It started with the entry of geisha, an inevitably strange and fascinating moment, perhaps to remind us that we were in Kyoto, the former imperial capital, home of a certain lifestyle and traditions among which many are centuries old. Partway between silent theatre and contemporary dance, the performance captivated and awed the audience, who were too fascinated to speak or even bring to their lips the champagne served as an aperitif. We were about twenty: winegrowers, chefs, and journalists, all gathered for an exceptional lunch. Among us were two French men whose names evoke good food, great wines and a certain idea of gourmet delicacies: chef Dominique Bouchet and Burgundy winemaker François Servin. Indeed, the place that welcomed us was quite special. Located at a stone’s throw from the Kamogawa River, in one of those alleyways with signs some more mysterious than others, the ryotei Honke Tankuma seemed straight out of a film by Yasujiro Ozu. It sums up all that makes the city captivating, and Japan in general: a refinement crafted even to the smallest details; the beauty of materials and forms that expresses, better than words, the perfection of a certain Japanese aesthetic; and an ability, as Junichiro Tanizaki so aptly describes in his In praise of Shadows, to play with light and its shadowy areas to give the place its spiritual touch. Squatting on tatami mats, our eyes were hypnotised by the two young ladies. We were told that one was a geiko, the other, a maiko. We will never be able to distinguish between the student and the elder, as their level of mastery and grace was so close to perfection. 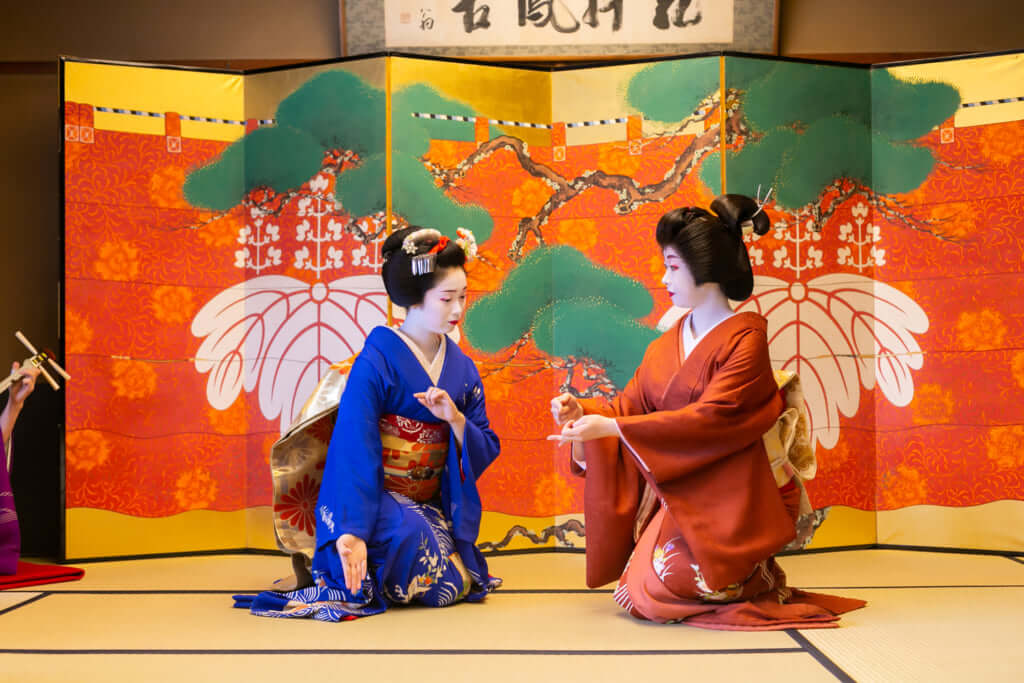 A moment of grace and magic before lunch, thanks to the extreme refinement of the geisha’s show.

Expression of a terroir 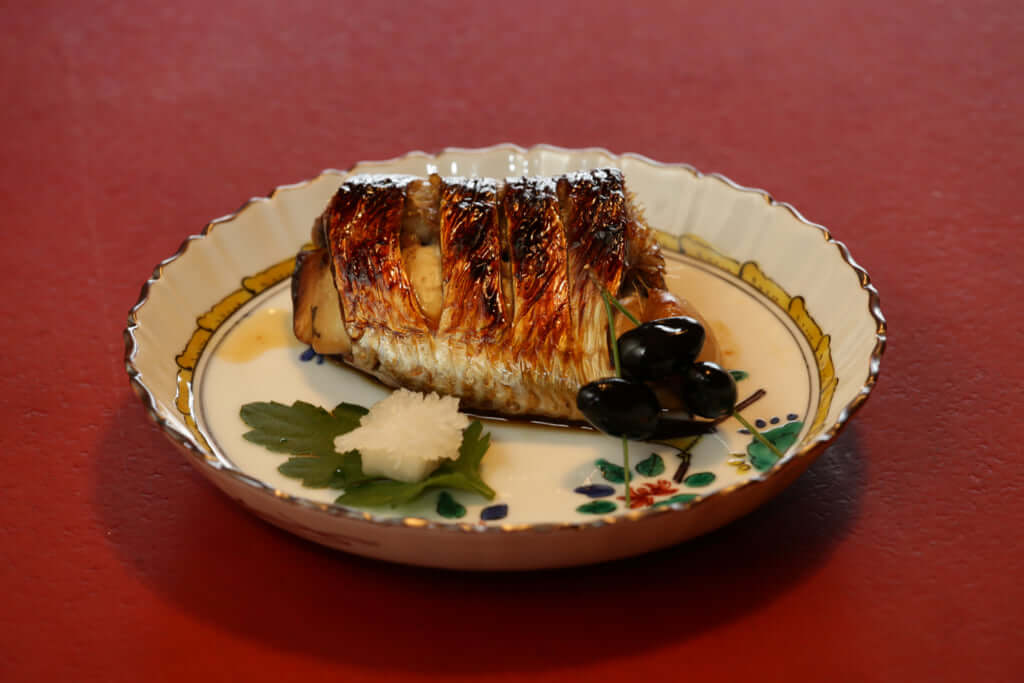 Like the wine, most of the dishes were made using Yoichi ingredients. Grilled herring is pictured here.

Matching the best of Hokkaido products – seafood at the top – with the fine cuisine of Kyoto was the purpose of this idiosyncratic lunch. There was nothing incongruous in so doing: Hokkaido is known for the richness of its food products — konbu for example — that have been exported throughout the archipelago for a long time now. It is more recently, thanks to the development of air transport, that the trade of fresh products, starting with fish and shellfish, has developed. The menu of the day condensed the best the island can offer: crab, scallops, amberjack, monkfish … and even oysters, an explosion of flavours featured here and there with local products such as tofu or the yuzu used in the preparation of oven-marinated herring; it was a performance worthy of the greatest masters, just for us. And yet that was only part of the delight, the following part proceeded glass after glass, in perfect harmony with each of the served dishes: now we had a Mongaku Valley from 2017 with scallops, a glass of Nana Tsu Mori Pinot from the Takahiko estate to accompany the steamed amberjack with its dried shiitake mushrooms and gingko nuts. So many dishes and wines whose quality could not escape the Burgundy winemaker François Servin. Servin visits Hokkaido frequently, and did not wait for the lunch to predict a bright future for Yoichi wines. Still, he is impressed by the quality and characteristics of Yoichi wines: ‘I found in all these Yoichi wines a finesse, a precision that is rare, even among French wines. There is a very high expertise in their winemaking process, and I will not be surprised if, in a few years, French producers have lessons to learn from our Japanese friends… More generally, I also perceive in the perfection of some pairings – that of the wines of the Takahiko estate with the dashi so essential to Japanese cuisine for example – the expression of an authentic terroir.’ 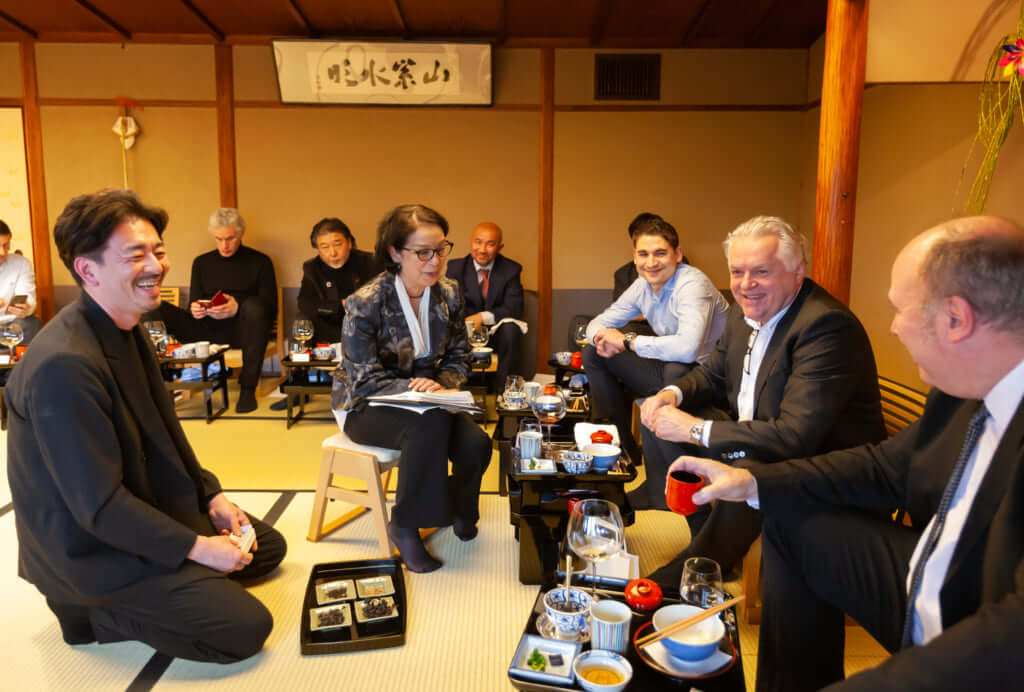 Another distinguished guest of the day, Dominique Bouchet, could not have said it better. The starred chef worked in the most prestigious restaurants of Paris, notably those of Joël Robuchon, before opening his own, first in Paris and then in Japan, where he has been present in Tokyo (two restaurants), Kanazawa, Nagoya… and recently in Kyoto. He too was awestruck by this four-handed dinner that was prepared by Junichi Kurisu, owner of the fourth generation of the Honke Tankuma ryotei, and by Hiroaki Tomiya – thirty years earlier his disciple – who came from the Kakuto Tokushimaya ryokan, Yoichi. ‘I found in all the wines served to us today a very high quality, whether the Mongaku Valley of 2017 or the Pinot Noir from the Takahiko estate, and I can’t wait to offer them on my menus. I will have to talk to my sommelier about it… of course, I will also retain from this lunch all the relevancy, all the depth of this pairing of Hokkaido products with Kyoto cuisine. Something here makes sense. I’ve been to Hokkaido several times, but to be honest with you, I didn’t know there was such a wealth of products there. I’ve discovered several that might give me some ideas,’ he concluded with a smile. 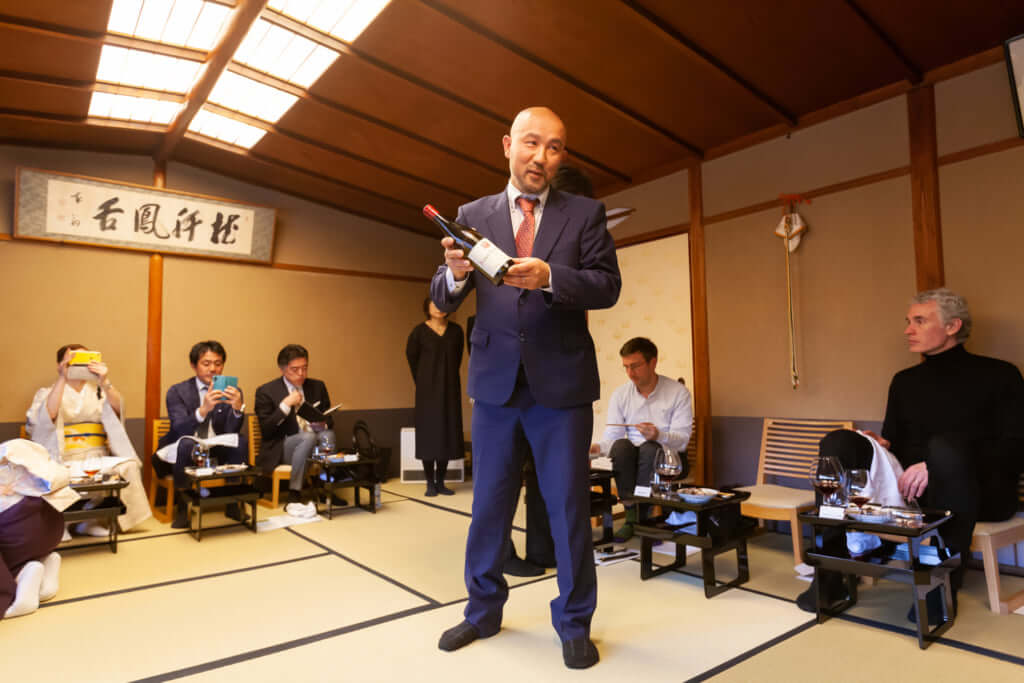 Takahiko Soga, winemaker and owner of the Takahiko winery, presents a bottle of his wine Nana-Tsu-Mori.

Like all things, the best also has an end, and so did this exceptional lunch. Once the dessert was finished, many of the guests lingered and forgot even the very notion of time, certainly helped by the few extra bottles the Yoichi winemakers magically took out of their luggage… Soon, however, it was time to say goodbye and take the returning Shinkansen, not to be missed, or we risked spending the night there — which was the worst thing that could happen to us. Fortunately, and in accordance with tradition, an omiyage — something like a souvenir in English — brought from Hokkaido was awaiting each of us, beautifully featured in a packing box designed in such a unique Japanese style… magnificent. Inside, three chocolates signed by Tomoyuki Takao, the chef of the Takao restaurant in Sapporo — one of the best addresses in the city. Creations with combinations as unexpected as tasty, such as a chocolate candy with ume-boshi, a kind of salty plum with a very strong acidity. Just to prolong a little more the great moment of fine food and the expertise that we had just enjoyed… full of flavours. 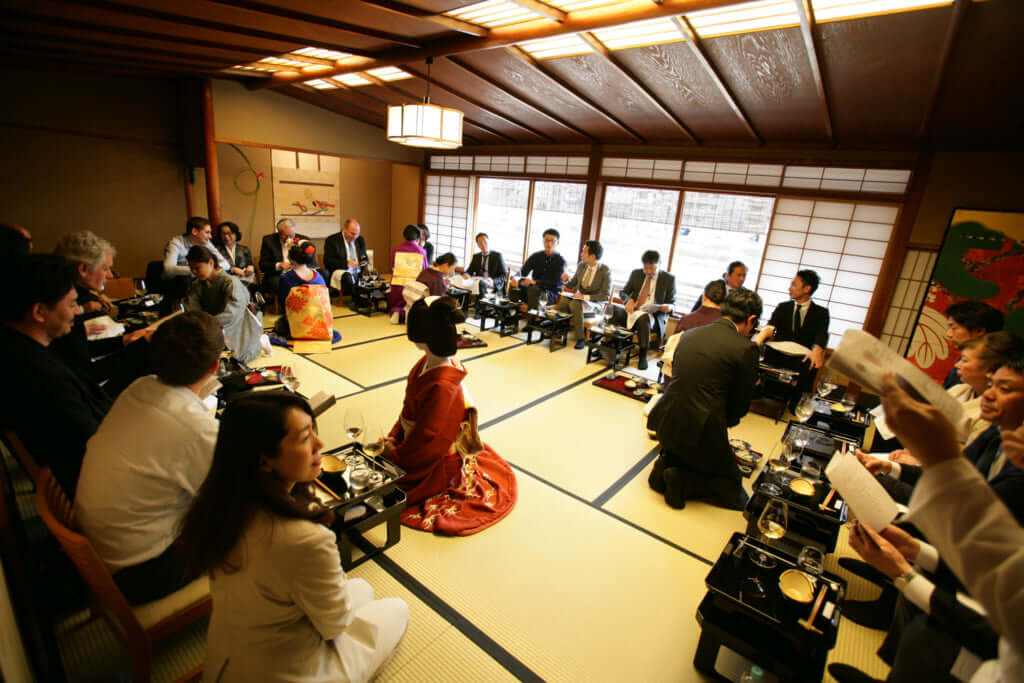 The matching of Kyoto cuisine with Hokkaido wines was enjoyed in a relaxed atmosphere. 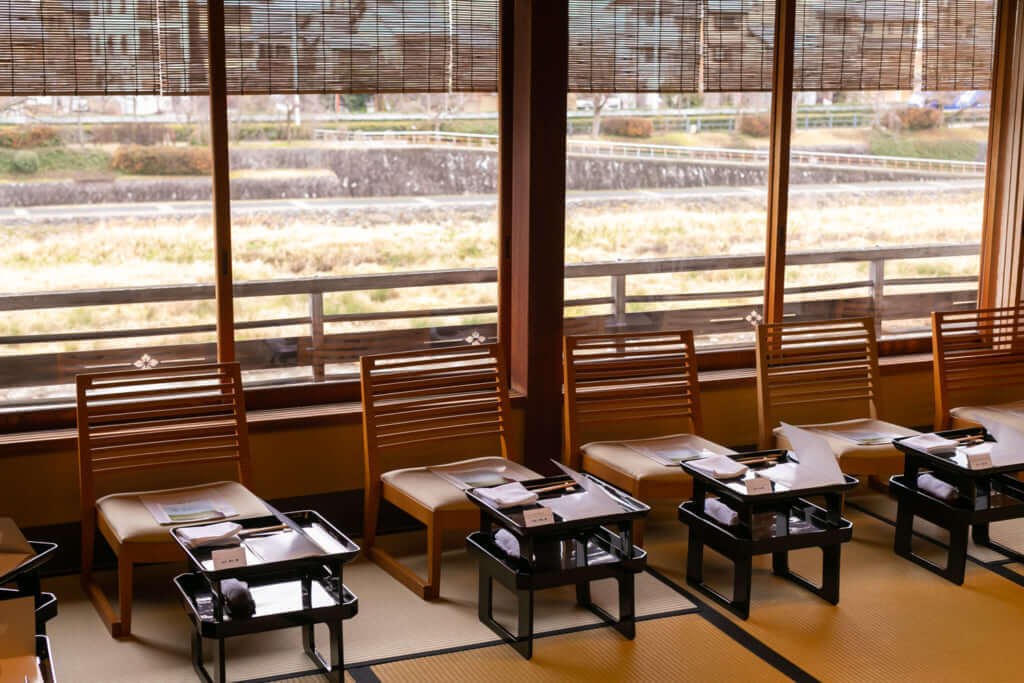 View of the nearby Kamogawa river from the restaurant’s tatami room. 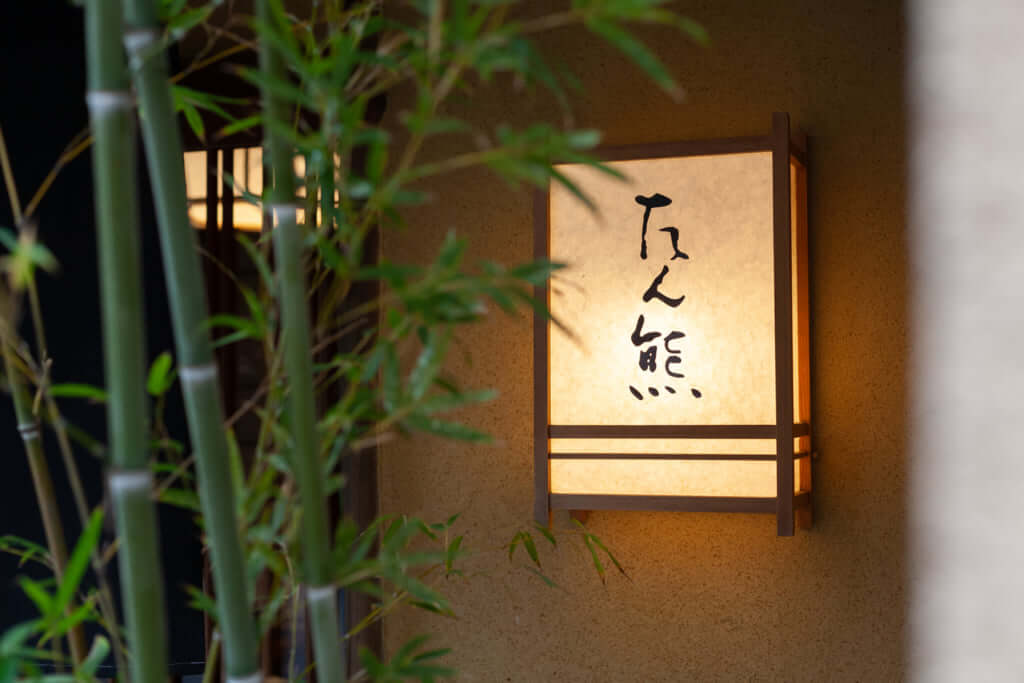 The Honke Tankuma restaurant was founded in 1928. From the start, its cuisine, which celebrates the city’s four seasons, earned the owner a solid reputation, as well as the nickname 'the god of Kyoto cuisine'.